8
The handsome Jaguar XF Sportbrake exhibits all the hallmarks that makes the saloon great, and with the silky smooth diesel V6 makes it a compelling choice
Open gallery
Close

This is our second opportunity to drive Jaguar’s latest XF Sportbrake, the rather handsome estate variant of Jaguar’s current executive-class saloon.

Last time around, we drove it with the 237bhp 2.0-litre diesel powerplant, which is mated exclusively to all-wheel drive. Here, we’re adding the 3.0-litre V6 diesel to that and the only petrol XF variant, the 2.0-litre 247bhp four-cylinder from the same Ingenium engine family as the diesel, both as rear-drive variants.

By calling this car Sportbrake, you might think the design team have been cut a little slack to prioritise style over practicality, but the important estatey numbers are pretty good. Boot volume with the rear seats up is 565 litres rather than the saloon’s 540, and with the seats down it raises to 1700 litres, which puts it on a par with the BMW 5 Series Touring, if not the vast Mercedes-Benz E-Class wagon. This time around, too, as well as flat sides to the interior of the boot, the rear seats have been tweaked to allow the floor to be flat when folded. The kind of thing that’s more useful, as a rule, than an additional five litres here or there.

Otherwise, things in the Sportbrake are as they are in the Jaguar XF saloon. It’s a predominantly aluminium-structured car, with double-wishbones at the front and an integral link set-up at the rear. Unlike the saloon, the Sportbrake comes with air-springs at the rear to keep the body level under loads, which can be whichever fridge or dog you throw in the boot or up to 2000kg pulled via the towbar. 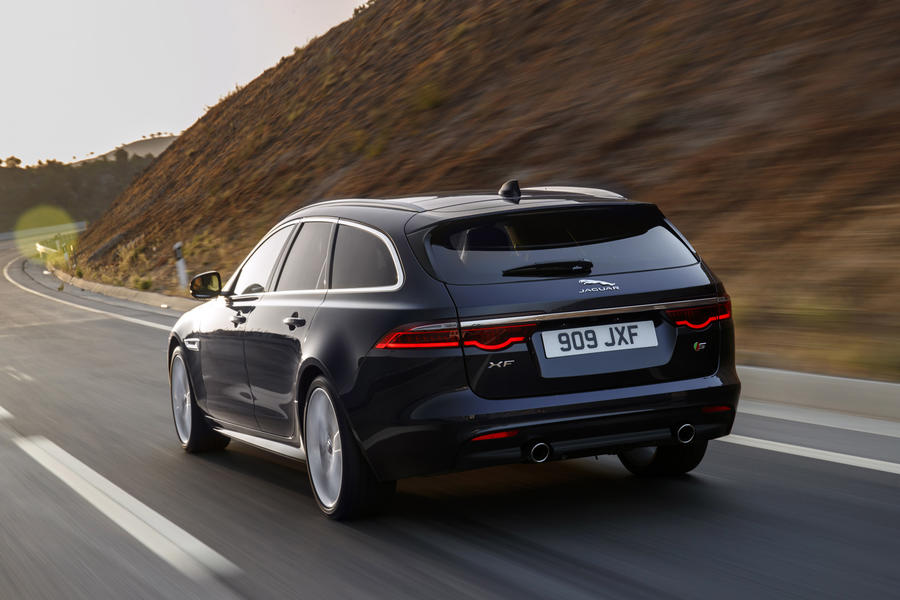 There are things Jaguar does really well and some things it doesn’t.

Let’s start with the latter. The Jaguar XF has a pretty tidy interior that is stylishly designed but, depending on where you prod, you’ll find surfaces that just don’t feel quite so thudsome as in a German executive alternative. The Germans each make many millions of cars a year and you get the feeling that, with an Audi A6, 5 Series or Mercedes-Benz E-Class, they throw everything they’ve got at it. Jaguar will soon be doing around 200,000. You just get the vibe that Audi, BMW or Mercedes-Benz has more to give.

Then there’s the entertainment and information screens, from which you can draw a similar conclusion. There’s nothing inherently wrong with Jaguar’s touchscreen controller; it just feels a little slower, clumsier and less finessed than the best you’ll find elsewhere.

But then there are the bits that Jaguar does well, largely, I suspect, because it has terrible roads on its doorstep: bad surfaces, bad cambers, pronounced road crowns, tight corners around ancient hedgerows. There’s less of that in mainland Europe and it shows. The XF steers with terrific precision, it rides with impressive deftness and control. It blends refinement, poise and engagement better than any rival.

The 2.0 diesel powertrain we tested previously is endearing enough, but sufficiently grumbly that we’d recommend the 296bhp V6 over it if you can stand the extra bills. At 49.6mpg versus 48.7mpg, the official figures reckon the V6, rear-driven, will be less thirsty than the AWD 2.0 oil-burner. And given there’s less need for the eight-speed ZF auto to downshift in the V6, in the real world that difference might even be greater. (Although, if you need all-wheel drive, I guess you know it, and then the 2.0 diesel is your only option.)

Whether you choose the 2.0-litre petrol is, again, down to the bills. It's that bit lighter, smoother, quieter, more responsive and revvier than any of the diesels, but it’s a 41.5mpg car on the official fuel cycle. It's lighter in the nose, too, being that bit more agile than a car that’s already probably the most agile-feeling in the class. 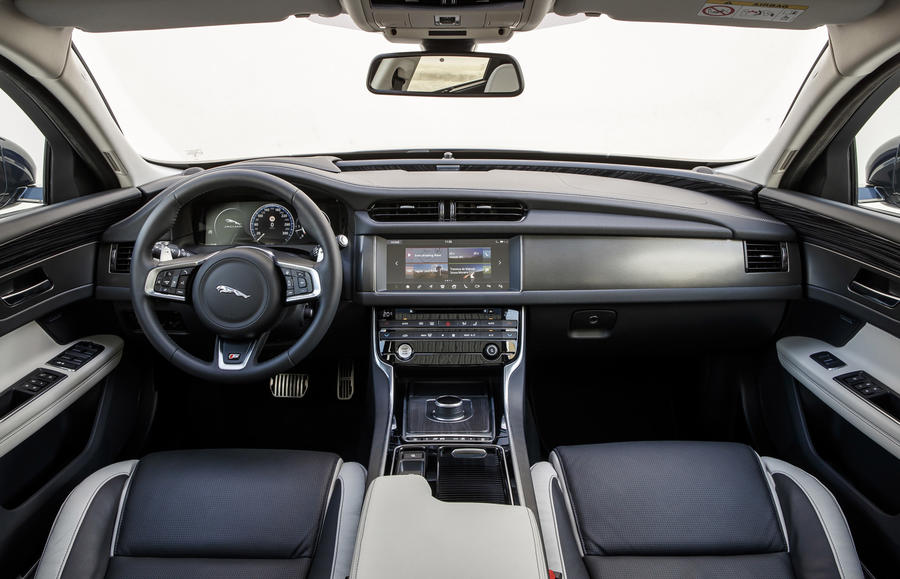 This class is so competitive that every car in it really needs to give you a compelling reason to choose one.

The Jaguar’s case is clear. It’s arguably the best-looking one in the class and I’m pretty confident that it’s the most rewarding to drive. It’s not unlike, say, the Alfa Romeo Giulia in the class below in that respect. Know the Jaguar XF’s limitations in other areas – and we’re talking degrees off the pace here, not miles – and the Jaguar makes a pretty convincing case for itself. 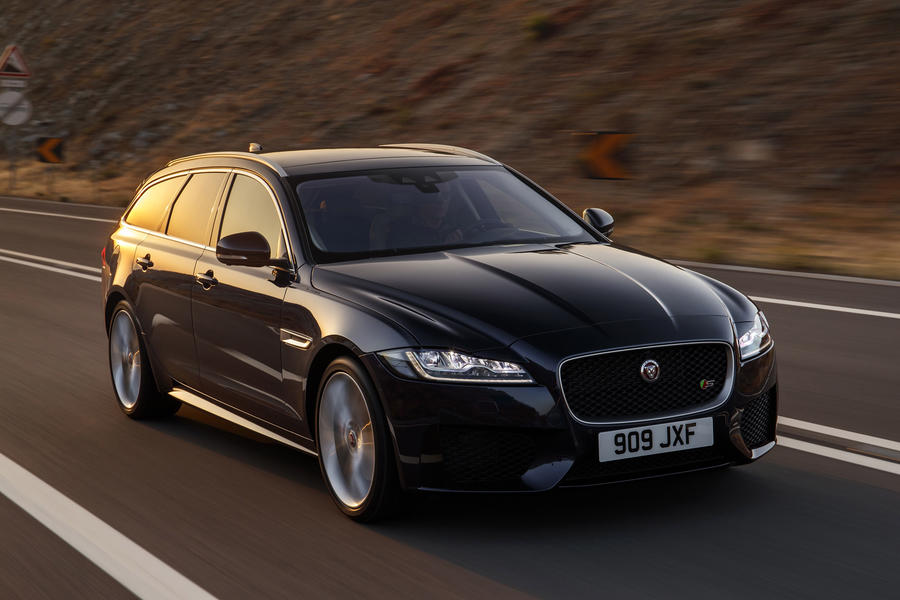 Beemers depreciate much faster than Jags. If your spending your own money on a new car then Jags are always a better choice. If your buying used I'd buy a BMW. Part of the problem is that BMW are flooding the market these days. Whereas Jags tend to be bought more by driving enthusiasts than company car buyers.... For evidence simply look up used car values. The most impressive JLR product in this respect seems to be the Evoque...

In terms of the cars themselves Jags handle better and go well. Finish on German cars is a bit better and if your used to idrive then you may prefer their infotainment. Personally I'm ok with Jags latest touch screens but think they are pricey. But then don't forget they are worth much more second hand....

I always wonder how JLR manages to be so much slower from 0-62mph.

Okay the BMW costs about 2k more but the extra shove of torque you get from it...

And thats without mentioning the better infotainment and use of materials in the Germans as pointed out here.

You really really have to be a Jaguar lover to choose this car over the German competition.

I am sure the engine is marvellous, the ride and handling great and the steering is the most precise in its class but it would still be a no for me.

It looks old and is impossible to distinguish from the previous generation XF, the plastics inside are of an awful look and feel and the infotainment system is equivalent to an iPhone 4. The newest offerings from the Germans, and Volvo for that matter, offer so much more. Especially much more advanced technology, both for safety systems, connectivity and infotainment.

I am sure the engine is marvellous, the ride and handling great and the steering is the most precise in its class but it would still be a no for me.

It looks old and is impossible to distinguish from the previous generation XF, the plastics inside are of an awful look and feel and the infotainment system is equivalent to an iPhone 4. The newest offerings from the Germans, and Volvo for that matter, offer so much more. Especially much more advanced technology, both for safety systems, connectivity and infotainment.

Actually, I think it looks very different from the previous XF. Every time a see an old XF on the road and then I look at the new one, (saloon or estate car), I think "They really compromised the shape to make it more practical (rear head room, boot opening etc.).  Of course, if you don't care much about rear space, you can buy an XE, which is exactly what I did.