From £15,7497
Isuzu’s pick-up has historically been a fleet-friendly tool but now it has been reinvented to go after the ‘lifestyle’ market as well
Open gallery
Close

Isuzu is predominantly a manufacturer of commercial and public service vehicles, which is a big part of why the D-Max doesn't enjoy quite the same foothold on the consumer market as more recognisably 'household name' models. In fact, Isuzu sold just 3154 units in the UK last year, compared with around 6000 Toyota Hiluxes and 13,000 Ford Rangers.

But, all being well, that could be about to change. The D-Max has now entered its third generation and is what you might call a "bit of a different beast". We're driving it here following its recent arrival in UK dealerships, but if you're from south-east Asia, you might already be familiar with this latest generation, which started rolling off the production line in late 2019 and is already outselling the all-conquering Hilux in Thailand - one of the world’s biggest pick-up markets.

The previous generation was as rough and ready as you would expect of a commercially focused, affordable 4x4 load-hauler, and while our testers found fault with the plasticky interior, slow infotainment system and agricultural powertrain, it won back some stars (admittedly not many of them) for its 3500kg towing capacity and good-value kit list, among other select attributes.

But now there’s this all-new D-Max, and right away, it’s plain to see that Isuzu is keen for us to consider it in an entirely different light from its predecessor. “Smarter, stronger, safer” are the buzzwords of the day, and just a cursory glance at the new truck’s chrome-clad front end and recognisably SUV-inspired dashboard layout reveals just how far this humble workhorse has come.

Isuzu UK managing director William Brown recognises that the market withdrawals - both recent and imminent - of rivals such as the Mitsubishi L200, Nissan Navara and first-generation Volkswagen Amarok have the potential to work in the D-Max’s favour. The brand hopes to achieve 10,000 sales per year by 2025 and has recently appointed 11 new dealerships to cope with the expected hike in demand, eight of which, sensibly, are ex-Mistubishi franchises.

We had a go in the top-line V-Cross, which in £32,759 (pre-VAT) double-cab, automatic guise is expected to be the best-seller. Gunmetal-grey exterior trim elements, jazzy 18in alloy wheels, LED light clusters and optional Pearl White paint are the obvious visual differentiators from the rough-and-ready entry models, while added luxuries include a bigger touchscreen, leather-style seats, dual-zone climate control, a reversing camera and keyless entry. A locking rear differential is standard fitment from DL20 trim upwards and all variants come with an integrated rear step, a full suite of driver aids, Bluetooth connectivity, DAB radio and a USB port. 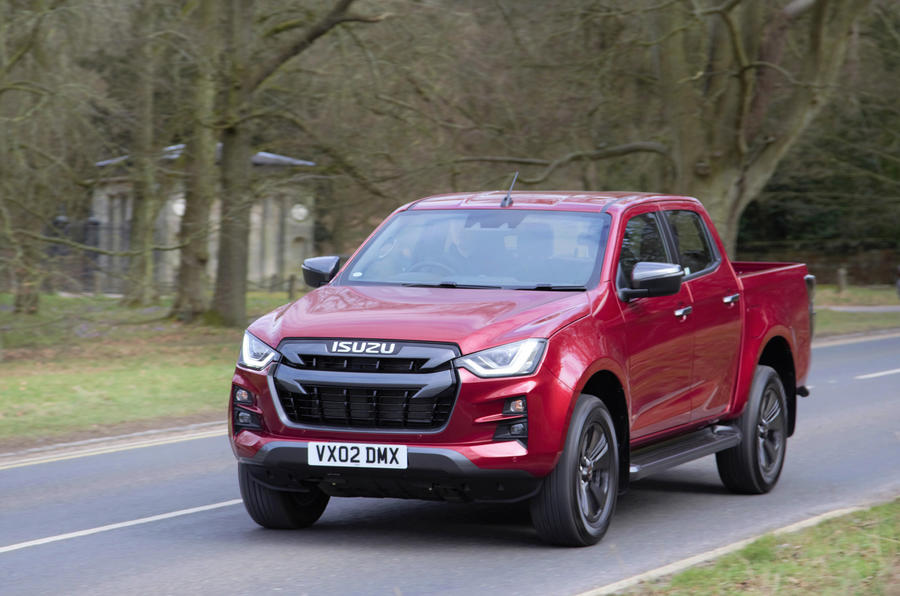 However close the D-Max comes to aping some of the conventional characteristics associated with passenger-carrying SUVs, you have to remember that Isuzu doesn’t make such cars, and neither is this wholly intended to tempt the average business buyer from their BMW X5 or Land Rover Discovery. It is, first and foremost, a tool - one that we are jokingly reminded “loves work loads” (geddit?) - so going in with lofty expectations of class and panache is a sure-fire way to come away disappointed.

Instead, marvel at the standard-fitment 4.2in digital display, the impressively up-to-date and advanced central touchscreen (7.0in on DL40 and 9.0in on V-Cross), and eight-way electrically adjustable driver’s seat. Emblematic of Isuzu’s pursuit of the ‘lifestyle’ market, these are just some of the features that mark this latest-generation D-Max out from its faintly crude forebear. There are power windows all round, wireless smartphone mirroring is equipped across the range and so is cruise control of the adaptive variety. Regardless of expectation, there’s little lacking in the kit department, at least on this top-spec example. The fleet-focused, black-bumpered entry models obviously take a more analogue approach.

Of note, too, is that this is the only vehicle in its segment with a coveted five-star Euro NCAP rating, courtesy largely of its larger airbags, reinforced chassis and updated suite of advanced driver aids. Drive it at a steady 25mph towards an immovable object and it will bring you to a controlled, straight stop - surely an appreciable ability for anyone who spends a lot of time around heavy farm and building equipment, or negotiating tight country lanes.

First impressions count, and the D-Max’s chances of impressing are enhanced if you give it the chance to demonstrate its off-road ability before all else. The average pick-up owner might not have much call to drive along a 45deg embankment or - oh, I don’t know - ford a sizeable estuary, but it’s certainly reassuring to know it can when needed. The D-Max really is unfathomably capable when it comes to traversing the most hostile of terrain. Air intakes have been raised to increase the wading depth to 800mm, underbody protection has been substantially improved and electronic aids such as hill descent control and shift-on-the-fly four-wheel drive are fitted as standard. 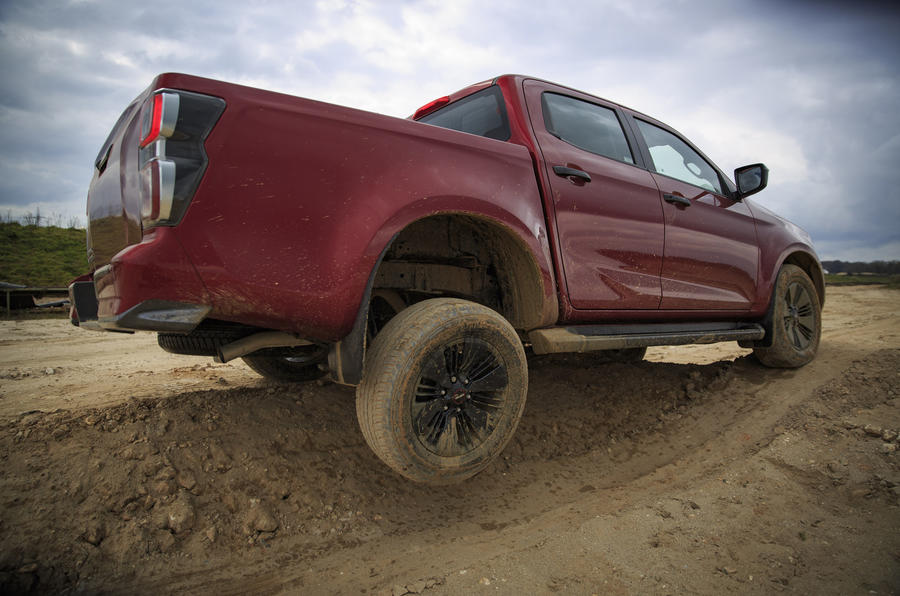 Isuzu boasts that the revamped four-wheel drive system is now the fastest-engaging in its sector, calling the rear driveshafts to action in just 0.69sec at speeds of up to 65mph. You’ll almost certainly never be in such a rush butm again, nice to know. A locking rear diff is fitted from mid-range DL20 upwards and is instrumental in helping the truck over undulating ground that you’d struggle to cross on foot. Sure, it’s a bit clunky and occupants will slide about no end on the flat-bottomed seats, but find a new mainstream SUV that’s equally unstoppable at this price.

It’s when you leave the tank tracks behind that such roughness becomes a bit less forgivable. That 1.9-litre turbocharged four-cylinder diesel is certainly a torquey lump for its size, but it can’t hold a candle to the Hilux for relative refinement. Despite various measures to reduce noise, vibration and harshness, it’s grumbly at idle and all-pervasive under load.

This, in turn, would be easier to forgive if it translated into something resembling satisfying pace, but the D-Max is at its best tootling around locally between freeholdings and quarries. This automatic version needs a teeth-grinding 13sec to hit 62mph from rest, and the tyre and wind roar at a 50mph-plus cruise are tangibly harsher than in the Toyota.

The six-speed Aisin automatic gearbox changes quickly enough (25% faster than its predecessor, apparently), with no great pause between ratios, but feels indecisive and lethargic under acceleration, holding high revs for several seconds before choosing a bigger cog.

Happily, Isuzu says, the D-Max weighs less than 2040kg (although by only 10kg in its heaviest form), so while it has a smaller engine than its main rivals, it’s technically faster point to point, because it’s legally allowed to drive at ‘passenger car speed limits’, whereas heavier trucks must not come within 10mph of the limit. A negligible point of consideration, perhaps, but consider also that the smaller engine is tangibly more efficient than its rivals, mustering 30.7mpg combined, but is still rated to tow 3500kg. In daily use, you won’t find it wanting - but don’t expect to zip out into gaps on the roundabout or to make quick work of overtaking.

It feels almost redundant to even discuss the dynamic performance of a circa-£30k truck, but Isuzu is keen to highlight the measures taken to improve roadholding and handling. The front control arms have been raised for reduced roll and improved stability, while the removal of a leaf spring at the rear is said to reduce back-end floatiness when the load bed is empty. It has worked, too: the D-Max doesn’t wander or twitch on a straight road, and even with no payload, the rear axle doesn’t bounce over potholes and bumps. Impressive, too, are the minimal amount of lean when taking tight turns at speed and the town-friendly turning circle. 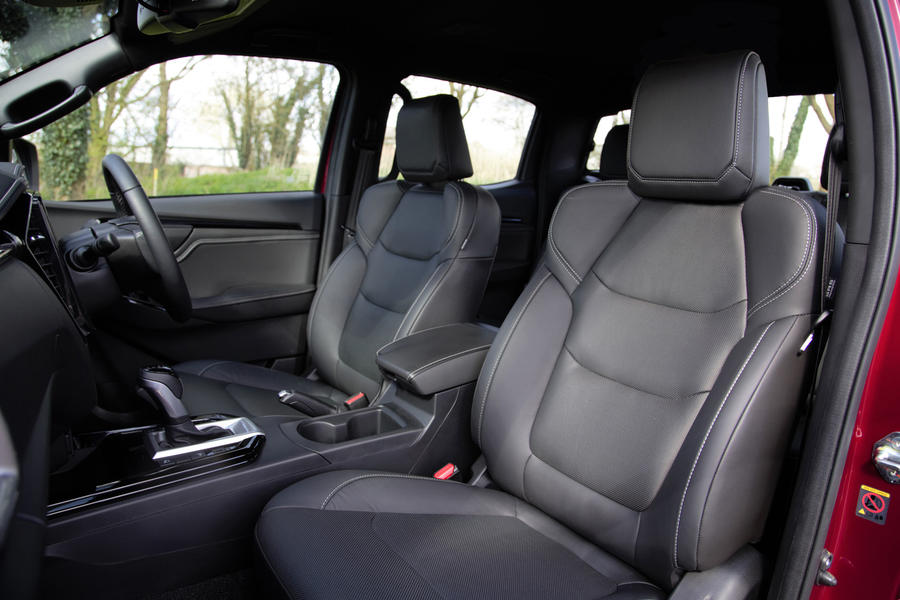 Perhaps it suffices to say that the D-Max, in its first month on sale in the UK, has completely sold out - so place an order now and you’ll take delivery towards the end of the year. And really, why wouldn’t it? All variants undercut their Hilux equivalents on price, and while you might take a slight hit on fit and finish, the important factors - namely ruggedness, durability and usability - are absolutely on a par.

Use it for what it’s meant for and the D-Max represents astoundingly good value and will seriously impress off road. It won’t be so well suited for family life at the weekends, even with all options ticked, but there are fewer rivals to consider these days and a conventional SUV of similar capability (what few there are) would up the list price considerably. All hail the no-frills, affordable workhorse. 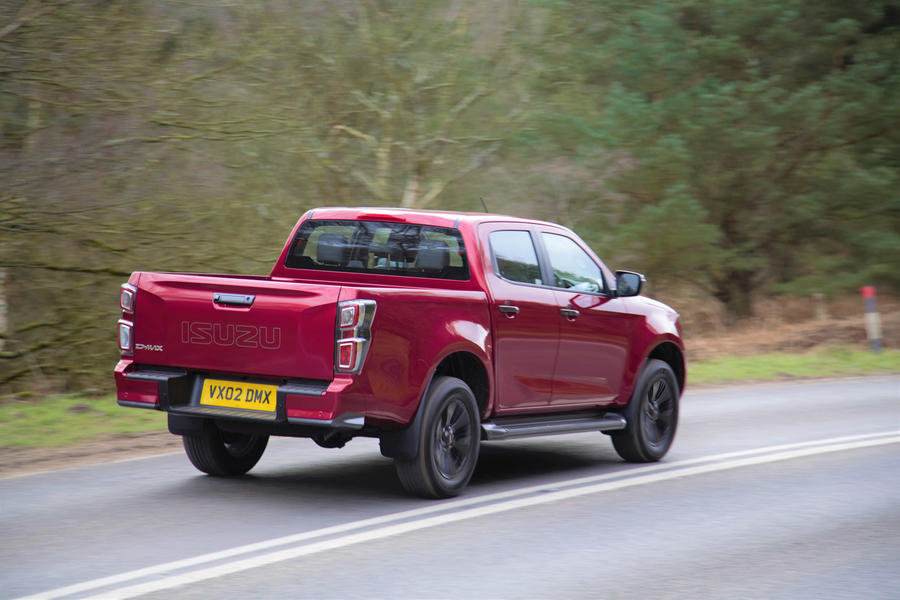 A stranded asset, surely? These clunky diesel pick-ups are soon going to be made obsolete by the new generation of EV trucks lead by the GM Electric Hummer and the Rivian.  Cheaper versions will soon follow.  The smart money would wait for the change in the market.  Buying a diesel now is a mugs game because they will be worthless in no time.  You may as well set fire to £20 notes.

I recall Autocar gushing over old style LandRover that had trouble achieving 100km/h. in less than 18sec. If you want to have go anywhere lifestyle with family on budget, then I doubt you'll be worried about those 13sec. The go anywhere ability and reasonable economy shall be more important. The noice of the engine might however bit an issue depending upon how truly loud it is, whether it can cruice without being deafening lout inside. This is clearly massively superior to an old style LandRover.