From £18,6668
Refined and with a high-class interior, the Tucson could upset the best cars in its class, depending on its pricing
Open gallery
Close

The fourth generation Hyundai Tucson is, I think it’s fair to say, quite striking. Which is no bad thing when there’s an abundance of medium-sized SUVs and you want to tell them apart. I don’t think you’ll have too much trouble with the Hyundai.

The Tucson sits between the compact Hyundai Kona and full-sized Hyundai Santa Fe in Hyundai’s range. Previously, the line up has started at £23,000, rising to £32,000, all before options, but you can expect both will go up with this example.

The size has increased, too. At 4500mm by 1850mm, it’s 20mm longer and 15mm wider respectively than the previous Tucson, which means it’s a little longer than a Volvo XC40 but shorter than a Nissan X-Trail. It’s a five-seat family wagon for those who like some tallness in their life. Which, I am aware, is a lot of you.

There are two- and four-wheel-drive versions – this rather well-specified derivative drives all four wheels – with powertrain options including a 134bhp diesel that more people should consider than will, and 1.6 mild-hybrid petrols with 148bhp and 178bhp. Then there’s this 227bhp 1.6 less mild hybrid that can drive on electric power alone from time to time.

A non-electrified petrol and a low-powered diesel will follow, as will a plug-in hybrid. Whichever electrified version you get, the hybrid’s batteries sit below the boot floor, although pure internally combusted cars have the same luggage volume as electrically assisted models. Here there’s a seven-speed automatic, but you can have a six-speed manual. 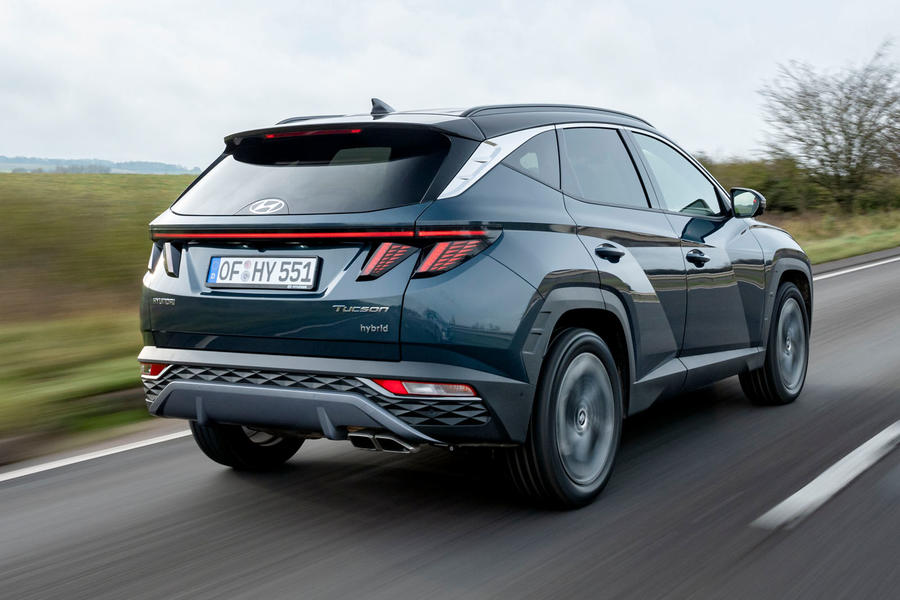 Inside, the new Tucson is almost as bold as the outside. There’s a positively elegant sweep of fabric and metallic/piano black finishes across the dashboard, neatly integrating the air vents, which, if finished in veneer and chrome, would be called ‘yacht inspired’ or something if it came from an old-school premium European maker.

As it is – with soft-touch plastics abounding; separate, clear climate controls; big, pleasingly coloured digital dials; and a largely functional central touchscreen (with phone mirroring) – it’s both a functional and attractive interior. A Volvo XC40 has a bit more joy to it, but if the alternative is a Volkswagen Group car, so samey and staid, this is a really pleasant option. The fit is strong, too, and your fingers meet hard plastics only when you prod down at door bins and the central storage cubby.

The perforated leather seats on this car mark it out as a high-spec example – given it’s the top powerplant, too, it’s probably pushing into the mid-30s on price – but Hyundais come with kit as standard that you might have to pay for elsewhere. The outer rear seats – spacious, with decent head and leg room even if a tall occupant is in the front – are heated and the tailgate’s electrically operated. This stuff is standard on the £31k Premium SE at the minute (although tbh I can always live without an electric tailgate) and I doubt equipment levels will be reduced for this new car.

And to drive? It’s good enough. There’s good ride and noise isolation, although a bit of a head-toss wobble with it along bad roads. This being a left-hand-drive car might not help, sitting you next to the verge and the worst bits of the road as it does. There’s a suppleness to it – the 19in wheels, the biggest available, are shod with 235/50 R19 Michelin rubber – and when it leans, it leans quite quickly.

When it comes to a ride/handling balance, then, they’ve thrown it more towards the ride, which is understandable. The steering’s light and stays that way and, at under 2.5 turns between locks, is pretty quick. You can flick through drive modes – from Eco to Sport – which adds a bit of weight but seemed to make no difference to the ride on this car. Gives you red dials, though, and a rev counter. Racy stuff.

In this full-hybrid, there are times when it shuffles along in full-electric mode. Response is largely smooth, there are steering wheel paddles if you want to control what gear the car is in (and an extended pull on the up paddle puts it back in Drive), but in fully auto there’s an occasional hesitation while the caboodle tries to decide exactly what kind of response it should give.

Grip and traction are good. There’s a digital readout to show where power is being apportioned. If you pull out of junctions swiftly, you’ll see, as you feel, the rear rapidly taking up its share, so there’s never any scrabble or torque steer. As with most of the tech info, there’s no word on the towing limit yet, but the old Tucson had a legal limit of 1900kg (with around 1500kg being the sensible maximum of what you ought to pull). 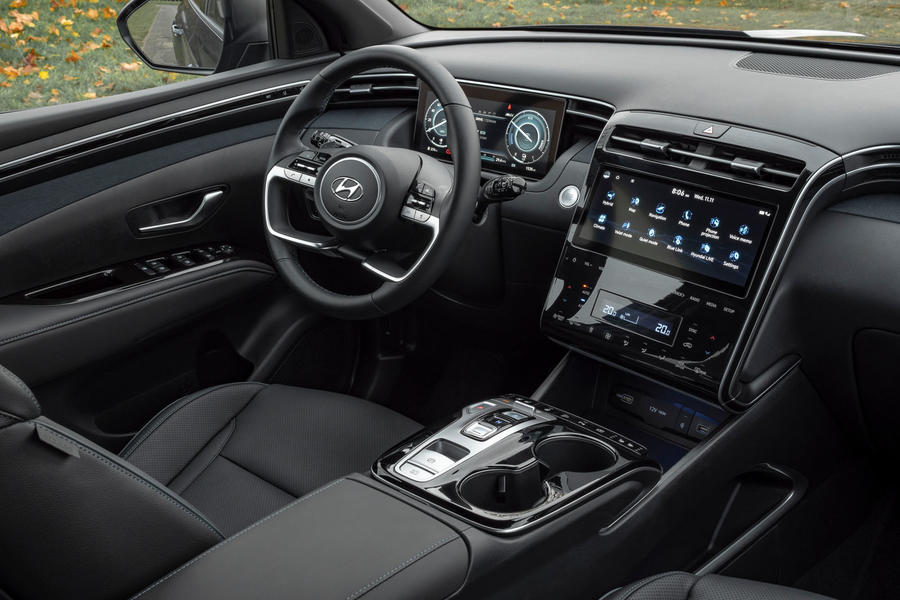 And so you end up with a car that’s more pleasing to sit in than it is to drive.

But given it’s a pretty relaxing, harmless, easy car to drive, you can get an idea of how good a car it is to sit in. 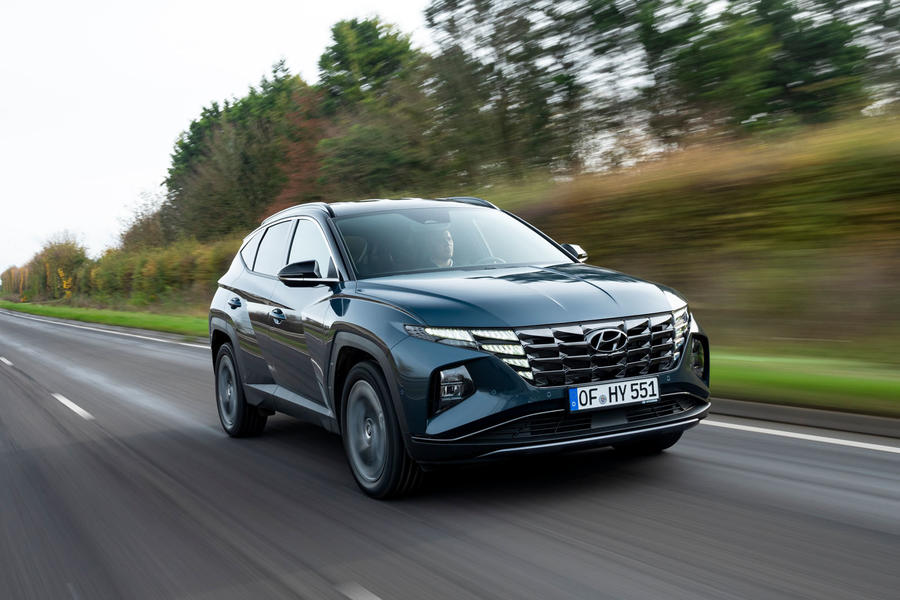 Log in or register to post comments
The Apprentice 26 November 2020
Looking at more reviews than this 'can't be bothered' one, car is loaded with tech, especially safety stuff, a new front middle airbag that inflates between front passengers so they don't impact each other, good in a roll over or heavy side impact. The Korean version hybrid has remote control start and movement so you can back it out a tight parking bay with the keyfob! - who knows if we will get such toys.
Will86 25 November 2020

Much to like but why include the touch senstive climate control buttons? Sure they're better than the controls being integrated into the touchscreen but physical buttons would be preferable. Aside from that the interior looks really smart though I'm less sold on the exterior. Maybe I'll like it more in person but whatever my final opinion is I applaud Hyundai for trying something a bit different.

Cobnapint 25 November 2020
I'm sure it's good, but the steering wheel looks ridiculous with that silver inset.
And did the guy who designed the rear end do it while tripping out on crystal meth or what?
Bloody awful.
Antony Riley 26 November 2020

Cobanapint slightly disagree its rear is its unique, mind the front view is also non derivative also. These  features make it look different it's not derivative and may  strike comment,at least it's not boring like V W  group cars vive le differance