Leaving an interval of just two and a half years between the introduction of your new flagship SUV and the arrival of its updated, ‘facelifted’ successor could be construed as an admission of serious error, given that a four-year gap is more typical.

So the fact that the Mk4 Santa Fe only went on sale in the second half of 2018 but has now been reconceived with aesthetic tweaks and an almost entirely new platform, plus an electrified overhaul of the engine line-up, represents an awkward volte-face from Hyundai.

However, to spin it another way, the industry is changing impossibly fast at the moment. And the fact that Hyundai has quickly read the room, swapped out the high-CO2 2.2-litre diesel engines, replaced them with downsized hybrid petrols and slid its new N3 platform beneath the Santa Fe’s seven-seater bodyshell shows considerable manufacturing agility. It will be worth the trouble, too, you suspect. The competition among full-sized family crossovers costing about £40,000 is utterly bloodthirsty, and the Santa Fe’s rivals include the Skoda Kodiaq, Peugeot 5008, Land Rover Discovery Sport, Toyota RAV4, Honda CR-V, and on it goes.

Other than the engine and platform, what else is different? At 2765mm, the wheelbase is unchanged but an extra 34mm of second-row leg room has nevertheless been found, and cabin width is increased too, so this is now an even more spacious interior. The second row also folds almost completely flat, at the touch of a button, and can still be slid fore and aft to free up a good level of knee room for the third-row passengers. It all means the Santa Fe remains among the more versatile large crossovers in terms of seat layout.

The cockpit architecture is then mostly as before, but the transmission tunnel has been tidied up considerably and slopes elegantly up towards the slimline new 10.3in touchscreen, which sits adjacent to the standard-fit 12.3in digital instrument cluster. The standard of fit and finish is now conspicuously high in here, too, and while there are still some hard plastics, most of the cabin is finished in soft-touch materials. Factor in plush seats and better than average visibility, and the result is one of the nicer, more relaxing cabins in the class. 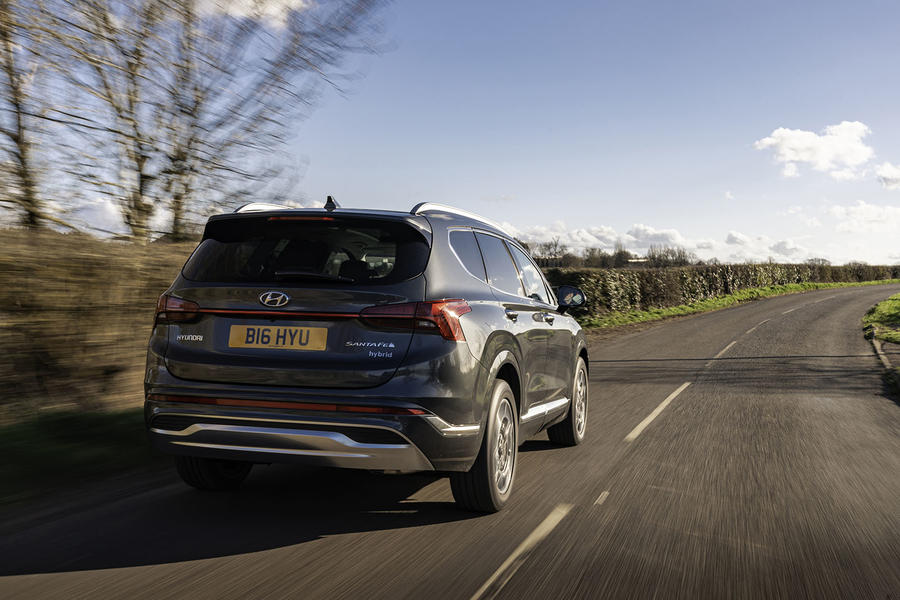 The dynamic elements of the new Santa Fe aren’t quite as convincing. Up front sits Hyundai’s new Smartstream 1.6-litre T-GDi turbo petrol engine, which is combined with a 58bhp electric motor (90bhp in the case of the PHEV) and Hyundai’s latest in-house six-speed automatic gearbox. The set-up drives the front wheels alone in the entry-level Santa Fe, but in our four-wheel-drive test car torque can be apportioned 50:50 between the axles.

As with many hybrids, on the move this new Santa Fe gives you a useful electric stab of torque when you push the accelerator, which makes it feel a little more responsive than it otherwise might. And in general, it’s an easy thing to drive; the controls are nicely tuned and there’s body control to spare. It handles securely.

What frustrates is the lack of sophistication when the engine fires up, which happens after the car has pulled off the mark in EV, which it does neatly and quietly, and by default. The transition is smooth enough in terms of power delivery, but the engine burbles loudly at low revs, a bit like the old Fiat Twinair engines, only with none of the charm.

This powertrain also seems less potent than its claimed combined maximum effort of 227bhp and 258lb ft. The finer turbodiesels in this class feel comfortably more punchy, and so while Hyundai’s hybrid set-up can supposedly achieve 40.4mpg, it’s not particularly good for much else, despite being reasonably well-mannered at a steady cruise.

Ride quality is also average at best, despite the new underpinnings. There’s nothing plain uncomfortable here, but on its passive suspension the Santa Fe’s heavyset low-speed gait never truly settles. It’s always reacting to something, and this doesn’t improve at cruising speeds. 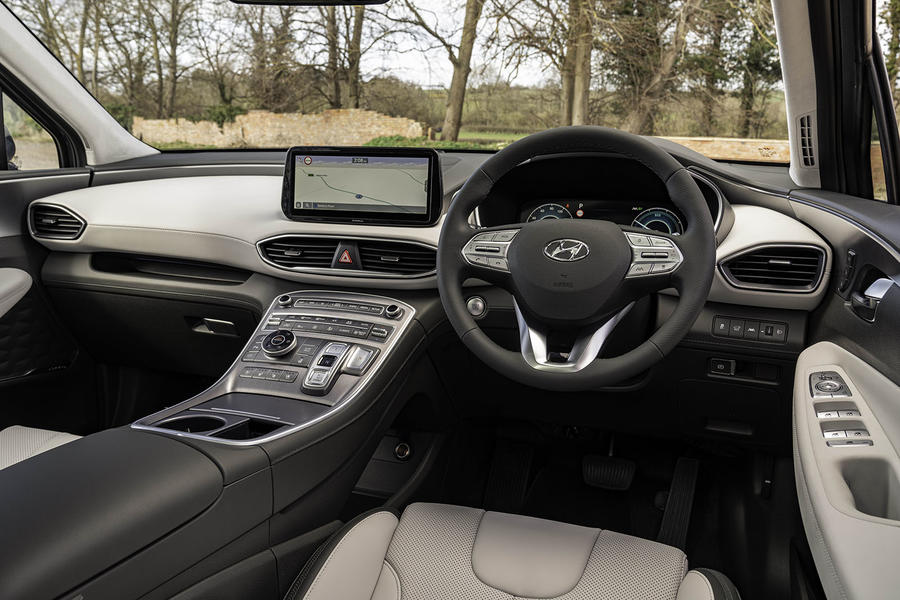 Ultimately, you considered buying the previous Santa Fe for its versatile and spacious cabin, bold styling and general ease of use.

The new car makes marginal gains in all those areas, but still has much less to shout about in terms of efficiency, dynamic appeal and, despite the generous level of standard kit, value for money. 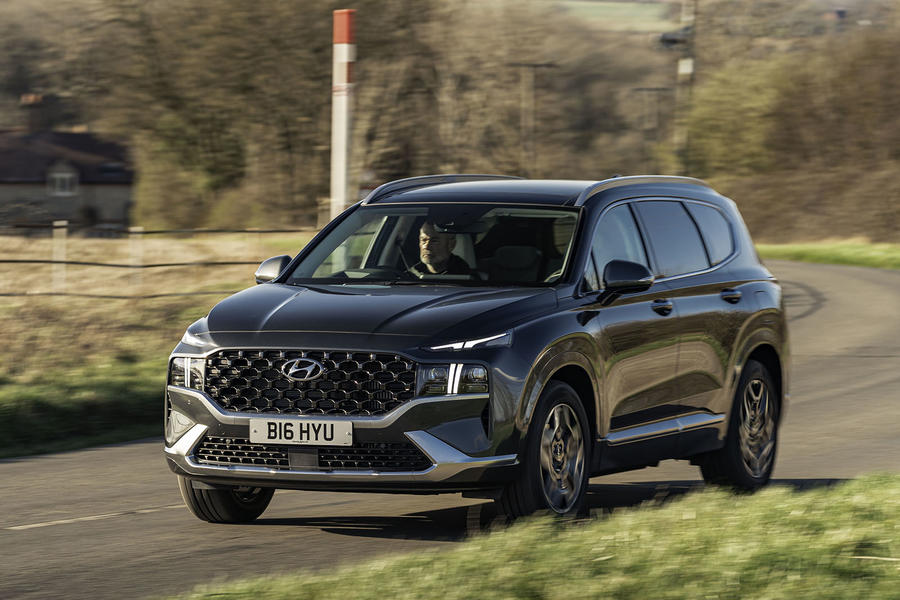 The car is actually pretty good. I reviewed it on essaywriterfree. Yes, the engine is rather weak, especially considering the cost of the car.

Look at all those lovely buttons! How very retro lol

FastRenaultFan 20 April 2021
It is a lovely dash but I think the version before the revamp looked better at the front. The Kia Sorento looks better now but the Santa Fe does have the nicer looking dash. Not to say there is anything wrong with Kia's it is classy inside but I am not a fan of all them screens.
View all comments (4)