The recent shake-up of what models do and don’t qualify for the UK government’s electric car grant has affected plenty of manufacturers, but Hyundai has been stung particularly badly.

While the entry-level Kona Electric continues to qualify for a discount under the new rules, the longer-range model is now exempt, carving a significant gulf through the line-up. It means the 64kWh Ultimate version seen here now retails for more than £40k, pushing it into a hotly contested price bracket along with newcomers like the Ford Mustang Mach-E and Volkswagen ID 4.

If you’re more of a glass-half-full person, though, you might say the crossover EV’s mid-life refresh is particularly well-timed. As well as receiving a host of interior technology and safety upgrades, the Kona Electric has been treated to a dramatic makeover.

The outgoing model wasn’t exactly in danger of being mistaken for its combustion-powered or hybrid range-mates, but there’s no chance of that happening now. It ditches a traditional grille in favour of a completely smoothed-over nose that will remind you of either a Tesla Model 3 or that scene in the Matrix where Keanu Reeves gets his mouth sealed shut. The redesigned headlights and narrow LED daytime-running lights of the petrol-powered Kona, which recently underwent a facelift of its own, also make an appearance here.

It retains the same synchronous electric motor as before, sending 201bhp and 291lb ft to the front axle via a single-speed reduction gear. Suspension is by way of MacPherson struts up front, and multi-link at the rear. The 64kWh battery pack is rated for up to 300 miles of range, and supports a maximum 77kW charge rate when plugged into a 100kW DC charge point. 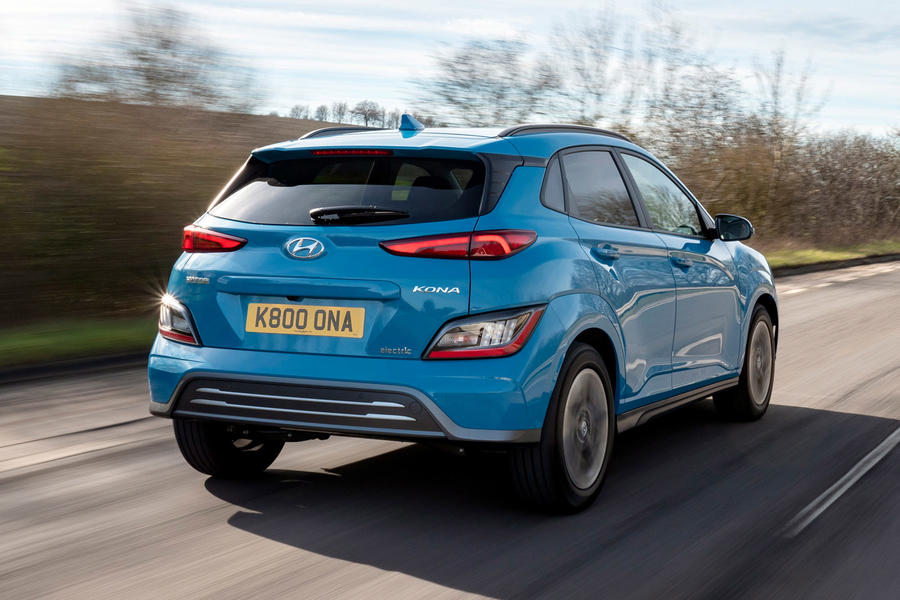 The Kona remains one of the more compact cars in the class, with only average passenger accommodation and boot space. It doesn’t try too hard to hide its use of hard plastics inside the cabin, either.

That said, the switch to an all-digital instrument cluster and 10.25in touchscreen helps it keep pace with rivals on the technology front. The infotainment UI is much sharper than before, so while both Android Auto and Apple CarPlay come as standard, you won’t be quite so inclined to use them.

Our car’s top-spec Ultimate trim costs an additional £2000 over Premium specification, adding (among other niceties) an electric sunroof, head-up display, leather seats with electric adjustment up front, and heated seats in the back. The former helps brighten up the cabin, which the road test team said could feel a little dark and uninviting when we reviewed the outgoing version back in 2018.

On the road, the Kona Electric is still surprisingly rapid for a mainstream crossover, with an ability to match some hot hatchbacks for rolling acceleration right up to motorway speeds. The front wheels remain overly keen to spin up under a heavy right foot, though I recall the pre-facelift car being even more dramatic in this aspect. Perhaps I just wasn’t trying hard enough.

Hyundai’s paddle-based regenerative braking remains the best implementation I’ve tried, letting me quickly swap between the three strength levels (or turn off regen completely) without having to take my hands off the steering wheel. The Kona continues to deliver some of the most consistent and accurate range estimates of any EV, too.

Not constantly second-guessing the figure on the dashboard means the Kona Electric is far more relaxing to drive than rivals like the DS 3 Crossback E-Tense, which can vary wildly in their estimates. It makes this one of the more credible options for those looking to replace a combustion-powered car.

Dynamism is still something of a weak point, with a fairly muted steering feel and an overreliance on electronic traction and stability controls to disguise the relative lack of grip under the front wheels. This is less of an issue for the Kia e-Niro, which shares a platform with the Hyundai, because of its positioning as a family SUV. It’s comfortably the more sedate of the pair. You can press on through the corners in the Kona, but there’s little reward for doing so.

Ride quality is also mixed, coping reasonably well at city speeds but becoming fidgety once you get out of town. Wind noise, particularly on motorways, also seemed more noticeable here than in rival EVs. 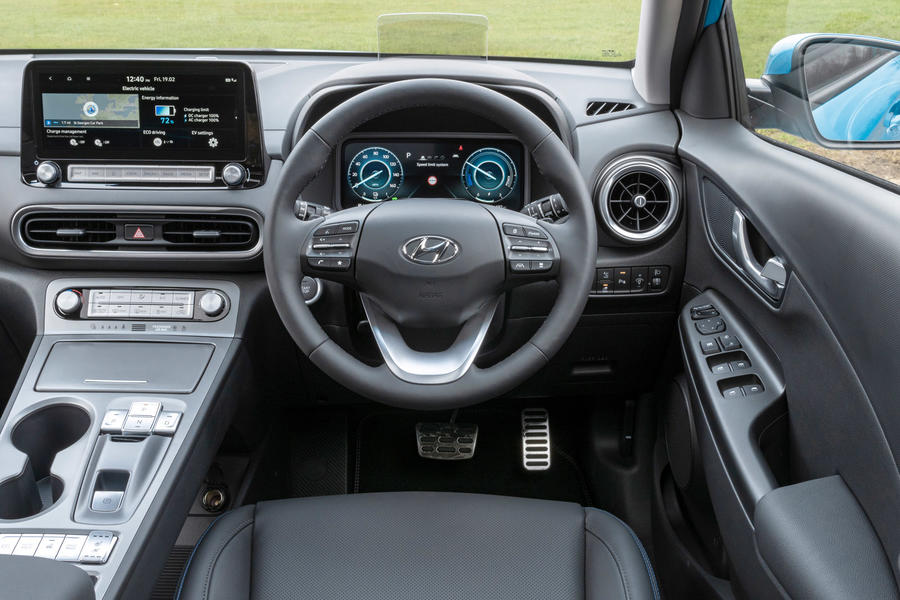 A government-forced instant price rise of £3000 between our test car’s arrival and departure certainly gave pause for thought, but it hasn’t significantly diminished the Kona Electric’s appeal.

In 64kWh form it continues to offer excellent real-world range, and the technology upgrades ensure it isn’t left behind by newer rivals. 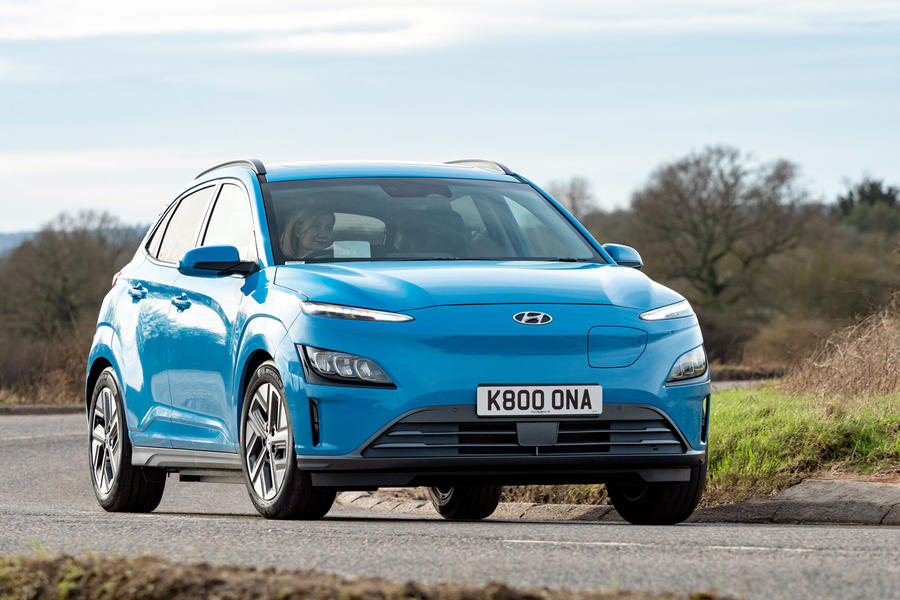 Still hate the styling - particularly the ugly and fussy double light clusters front and back... so pointless and unnecessary. Stopped me from buying one when they first came out - long delivery time didn't help either, and will continue to stop me now. Why does this vehicle have to look so gormless and ugly?

My thoughts exactly. Mediocre to drive, not particularly great value and generally all round dullard.

I may be a traditionalist, but I still prefer a car to have a grille, even if it is only for decorative purpose. Who ever thought it was a good idea to place the charge flap on the front of the vehicle with the cut out crossing over the crease in the front of the vehicle was badly judged, in my opinion. The shade of Blue shown also does little to benefit the looks of the car either. It may be a very worthy EV, but it looks very dull.