The new Hyundai i10 shouldn’t exist. The petrol-engined city car has been declared dead, you see, sparking an ongoing ‘whodunnit’ to determine whether it was low profit margins, prohibitive emissions legislation or changing consumer tastes that delivered the final, fatal blow.

And yet, in an improbable plot twist, here we have an all-new i10, looking fresh, relevant and, indeed, very much alive and well. Who saw that coming?

This third-generation i10 isn’t just a minor update, either. Hyundai has re-engineered it from scratch, evidenced by a fresh new design. The styling is familiar, but the adoption of the firm’s latest design language means a bolder grille, giving the i10 a more dramatic feel that further distances it from the dull but practical feel of early versions.

It’s all a bit more mature, but the i10 hasn’t actually grown that much: at 3670mm in overall length, the new model is only 5mm longer than the previous version, although the wheelbase has been stretched by 40mm and the body widened by 20mm, both to increase interior space and add a bit of extra dynamic poise.

There remains a choice of two petrol engines, both carried over from the old car: a 66bhp three-cylinder 1.0 and an 83bhp four-cylinder 1.2. A sportier, turbocharged 1.0-litre N-Line version will follow but, unlike the rival Volkswagen Up/Seat Mii/ Skoda Citigo triumvirate, Hyundai says there are no plans for a fully electric version.

Both engines are offered with the choice of either five-speed manual or automatic gearboxes. The suspension retains MacPherson struts at the front and a torsion beam at the rear, while wheels range from 14in on entry-level SE models to new 16in options on top-spec Premium specification examples.

The i10 has also taken a step forward on the inside. The cabin is well laid out, with comfortable seats and decent space: rear passengers will find decent leg room, although squeezing three adults in the back compromises each passenger’s personal space. Still, as with the 252-litre boot, it’s reasonably roomy for a car in this class.

The dashboard is sensibly arranged with a contemporary feel, and the 8in touchscreen – as with the rear-view camera, standard on mid- and higher-spec models – is nicely integrated into the overall design. Top-level Premium cars get heated seats and steering wheel, too; a £1000 tech pack adds a wireless phone charger and real-time traffic updates to the sat-nav. Hyundai has also fitted all three trim levels with plenty of Euro NCAP-pleasing safety kit rarely seen in this class, but compulsory on all new cars sold in Europe from 2021, including autonomous emergency braking and lane-keeping assist. 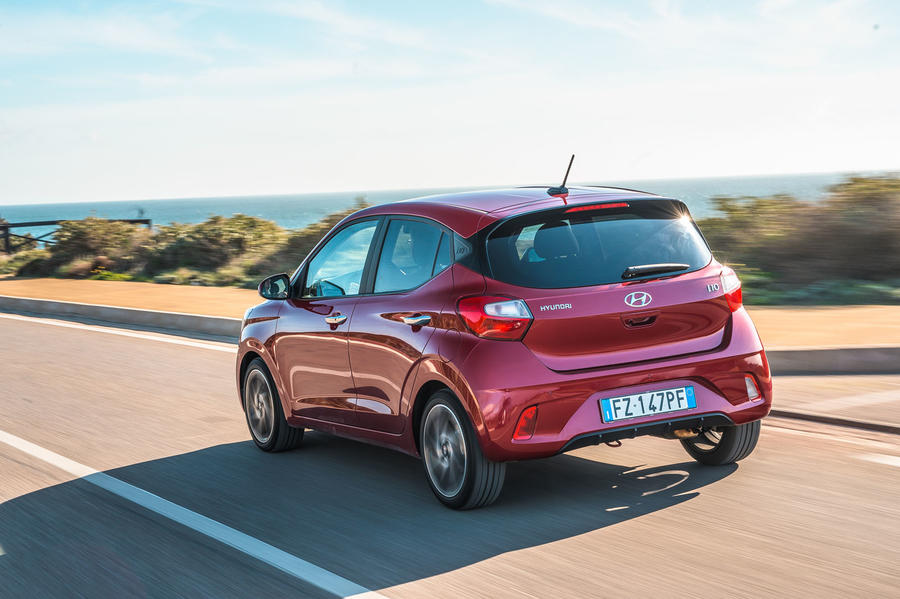 Thankfully the revitalised look of the i10 is reflected in how it performs, with handling that regains some of the verve of earlier-generation i10s but without losing the maturity and poise of more recent versions.

The steering is well weighted, allowing drivers to revel in the sort of responsive handling you hope for in a small, nimble city car. But it achieves that without feeling fidgety or nervous as some city cars can: in fact, in the driver’s seat, it feels as spacious to sit in and confidence-inspiring to drive as some cars in the supermini class above.

We spent time in i10s powered by both the 1.0 and 1.2 engines, all in top-tier Premium trim, but we’re focusing on the smaller unit since that’s the one Hyundai expects to be the biggest seller in the UK. It won’t require a spoiler alert to reveal that, with just 66bhp, it’s hardly the last word in performance. But while the deficit of power can be felt at motorway speeds or on flowing roads, it’s perfectly fine for the sort of driving regularly undertaken by city cars, with decent response and a largely good availability of power when needed.

The extra power and torque of the 1.2-litre unit is felt and certainly adds some useful poke, although it doesn’t transform the i10 into a pocket rocket (leaving us dreaming of that turbo N-Line version). 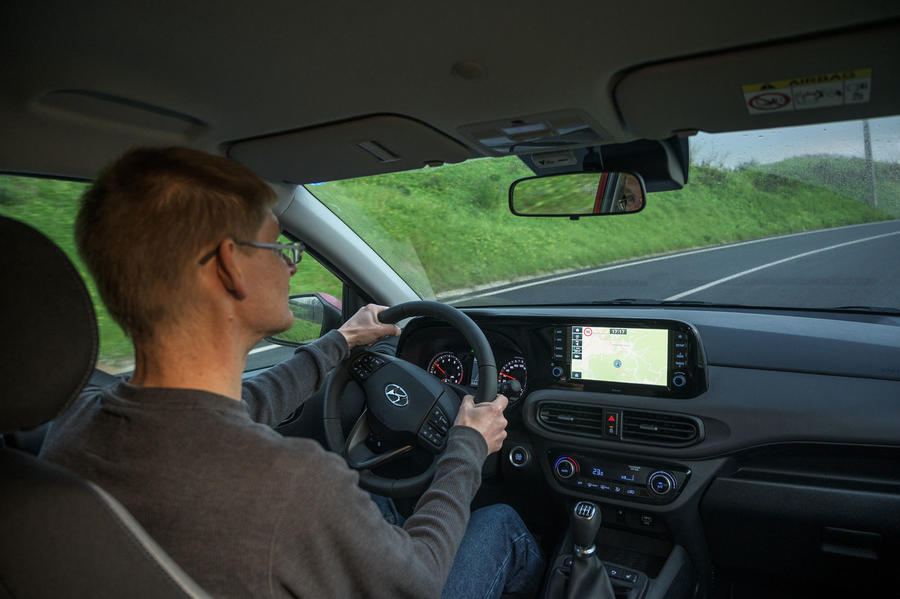 Of course, the upgrades to this new i10 come at a price: entry level 1.0 SE models now start from £12,495, rising to £15,495 for top Premium models with the 1.2 engine and automatic ’box. That’s pricing closer to some superminis than city cars.

Most buyers will take one on a PCP deal, though, with the expected monthly payments of around £180 to £210 closer to other city cars.

Regardless, this third-generation model restores the i10 to the top echelons of petrol-engined city car contenders. If that sounds like faint praise given the thinning ranks of the class, it’s not intended to be. While others have been arguing about who killed the city car, Hyundai just went away and built an excellent new one. Not bad for a car that, by rights, shouldn’t exist. 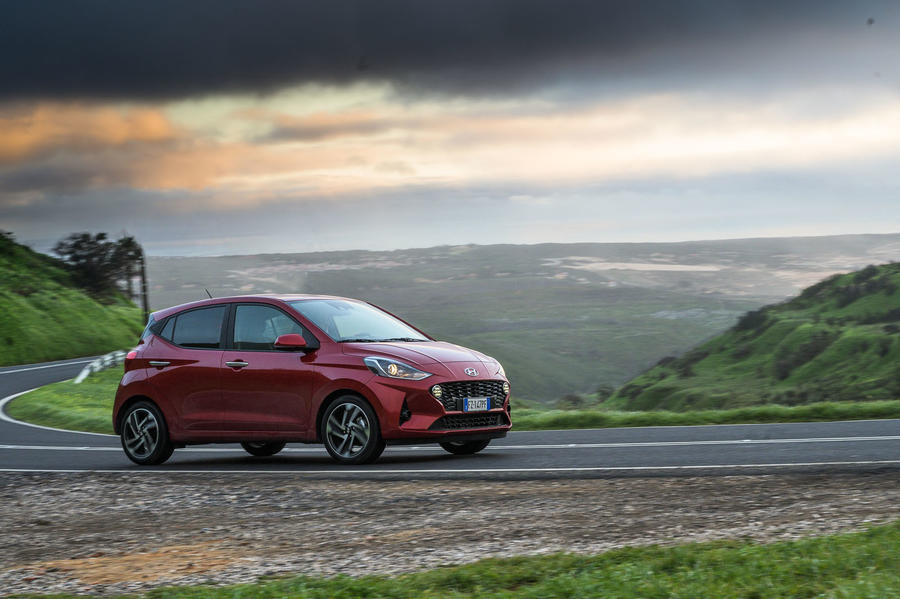 Modern looking Suzuki Swift with a 90hp 1.2 engine, has everything you need and is on offer at the moment from £11k , trances this entry level £12.5k 66hp effort.

in 2009 Hyundai were selling

Indeed. But at least we should be glad that some manufacturers still see the value in being present in the small/city car market, to attract people to the brand and give people who want a small vehicle some choice. I think its actually motoring journalists who are shouting the loudest that the city car is dead. We've seen this repeatedly over the years: The diesel version is always the best, no matter what your type of motoring, the new, bigger version is what you want as its more practical, everyone wants an SUV, etc etc

Have I just read an Autocar article giving genuine, unqualified praise to a Hyundai product? Without any of the patronising, damn-with-faint-praise kind of smug backslapping for a manufacturer that's never to be taken that seriously?

What on earth is going on here?