Do you ever find yourself looking at the hulking, jacked-up Ford Ranger Raptor pick-up truck and thinking “it’s nice, but it’s not quite lairy enough”?

Us neither: its outlandish off- road suspension-and-tyre package already give it more than enough presence on Britain’s cramped streets (not to mention agreeable levels of countryside competence). But this new Special Edition – which arrives as the current-generation Ranger prepares to bow out – ups the ante with “extra badass as standard”.

Roughly translated, that means it gains racing stripes, red accents inside and out and matt-black trim all round. If it didn’t stick out in the supermarket car park before, you can guarantee that it will now.

As with the ‘standard’ Raptor, its chassis has been heavily strengthened to cope with Baja-style knocks and jolts, its track is extended 150mm over the less hardcore XLT and it rides 51mm higher, courtesy of its beefy Fox shocks and colossal General Grabber AT3 tyres. There's a suitably imposing front grille, too, modelled on that of the larger and more powerful F-150 Raptor on sale Stateside.

But all those upgrades aside, the powertrain remains largely unaltered over that fitted to more common-or-garden Ranger variants: a 2.0-litre four-cylinder turbodiesel is hooked up to a ten-speed automatic gearbox, sending a sedate-sounding 210bhp to the rear or both axles for a distinctly normal 0-62mph time of 10.5 seconds. Could there be a conflict at hand between the Raptor's bark and its bite? Especially given daily driving situations don't give it the chance to excel by virtue of its off-road ability. 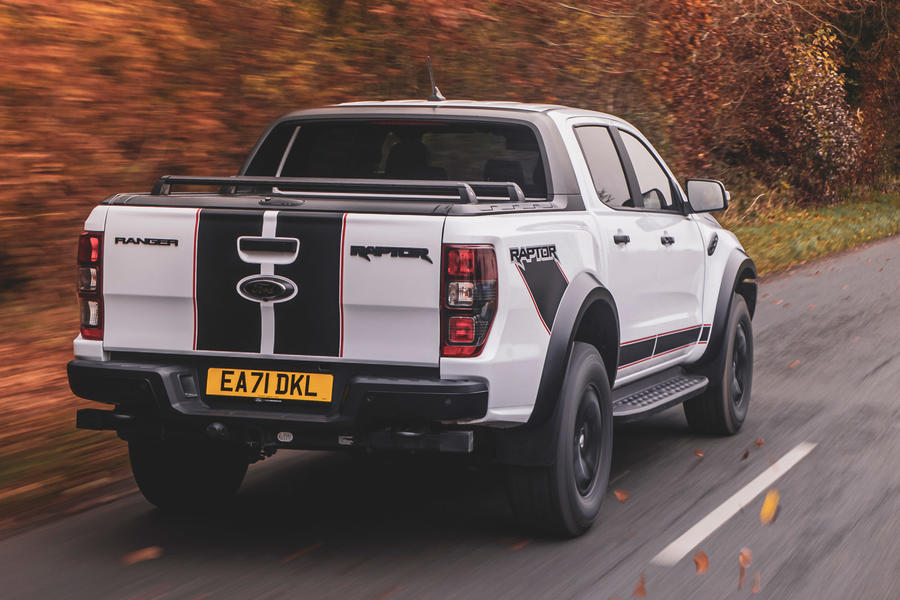 Stripes, stitching and suspension aside, however, the fact remains that the Raptor is barely mechanically altered over the standard Ranger. Any badassery that might have been attributed to you by jealous bystanders outside the local tearoom will be roundly shattered by the grumble of its 2.0-litre diesel four- pot, and its 10.5sec 0-62mph time won’t widen many eyes, either.

That said, it’s an effective and none-too-ruinous powertrain in day-to-day driving scenarios. We got 30mpg on a 100-mile motorway run, during which the motor was unintrusive (save for a piped-in synthetic growl at full throttle) and shifts from the 10-speed automatic gearbox were well timed.

The hardcore lift kit doesn’t overly blight the on-road experience, either, with swaying kept to a minimum in sensibly taken corners, and those gargantuan tyres are far more quiet on the move than you might think, with the added benefit that you will surely never kerb one of the alloys.

So while the Raptor's perfectly happy getting mucky with the best of 'em off the road, it is little-compromised in the way it behaves on Tarmac. Unsurprisingly, its considerable footprint and stature make themselves known in car parks, on high streets and on motorways, but it's as manouverable at low speed as any other pick up – courtesy of its light steering and decent all-round visibility, and in spite of the mystifying omission of front parking sensors.

The fact remains that the Raptor is effectively the least practical Ranger you can buy, because it has a load capacity of only 620kg (every other variant musters more than a tonne). That in turn means it can’t be registered as a VAT- exempt light commercial vehicle, so, unlike for the majority of pick-ups, all buyers will pay full whack. Which, since you ask, is more than £50,000.

But this is hardly the sort of vehicle you'd find in the driveway of someone who cares overly about such things. It's a statement truck, one of those increasingly rare enthusiast-oriented vehicles that majors much more overtly on charisma and merriment than it does on sublime dynamics or rip-snorting acceleration, yet still performs impressively over demanding terrain.

The ultimate test? Try and drive it with a frown on your face, then decide. 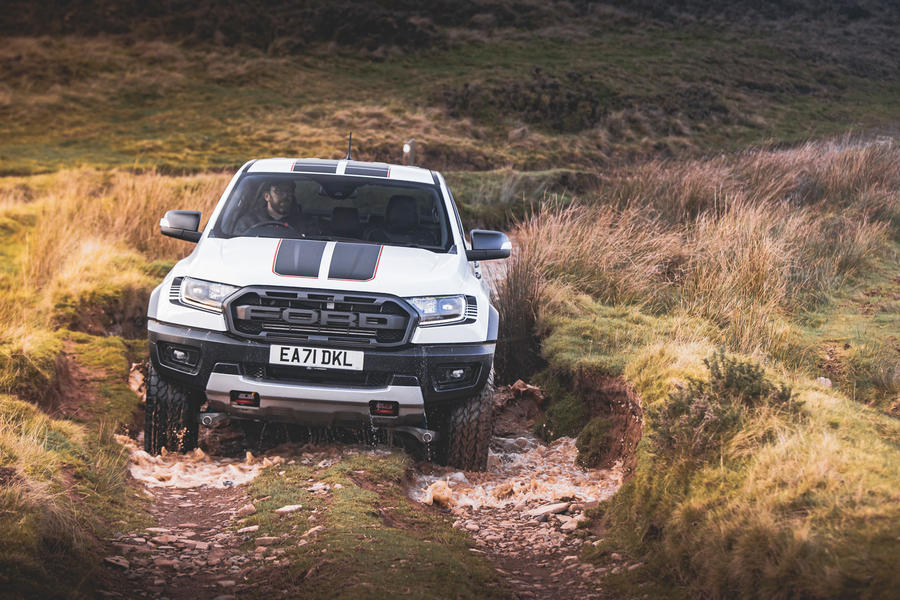 I like the look of this generation Ford Ranger Raptor (although white does nothing for it) however, this stickers and stripes special edition is clearly buying time until the new (already revealed) Ford Ranger appears in showrooms. The new Ranger will come with even more USA F-150 inspired styling and more importantly a new shared platform with VW (Amarok) bringing much needed petrol and diesel V6 engines. Hopefully they'll introduce a hybrid and even a battery electric EV variant in due course...

I live in Essex and I already see far too many of these being driven too fast up the A12 towards Chelmsford. Usually with an overweight builder- type behind the wheel, and a perma-tanned platinum blonde in the passenger seat. Classy- not! Please stop selling these for the sake of the planet!

Could the stripes and plastic be slowing it down, nah it's the weak 4 pot 2.0 diesel.  Expect a V6 and nothing else for £53k.  Bring on the Lighting