From £20,7108
A more vigorous, highly-strung driver’s car than the compact crossover segment needs, probably – but a proper ST and a likeable one despite its dynamic challenges
Open gallery
Close

The latest addition to the fast Ford model line up, the Ford Puma ST is a car about which even the staunchest critic of modern market trends and showroom tastes might quite easily allow himself to get at least a little excited. Disregard the rather confusing route by which this jacked-up, slammed-down fast compact crossover hatchback has made it off the drawing board if you need to, and concentrate instead on the alluring technical detail.

This is, after all, a five-door, 4.2-metre hot hatchback of around 200-horsepower with driven front wheels, a six-speed manual gearbox and a Quaife helical limited-slip differential (although the last item listed there is optional). And so, while it’s technically a crossover hatchback by segment, mechanically it’s unlike even what you might consider its closest usually all-wheel driven, auto-box-equipped, ‘performance crossover’ rivals.

The car is, for outright size and weight, actually within a whisker of a matching the one with which Team RS (as Ford’s in-house performance tuning arm was formerly known) made its modern reputation: the feted Focus RS of 2001. It’s slightly larger than the old-timer if only by a couple of inches here and there, as well as 50kg or so heavier and slightly less powerful; but it’s also torquier, and so it needs precisely as long as the hot Focus did to hit 62mph from rest almost twenty years ago: 6.7sec.

Ford’s sell for the car is that it’s intended more for Ford Fiesta ST owners whose families have grown out of their cars than Ford Focus ST clientele who fancy something more high-rise and urban-flavoured (why would they?). Delete the ‘ST’ suffixes, though, and that statement could very accurately be applied to the Ford Puma in a wider sense. 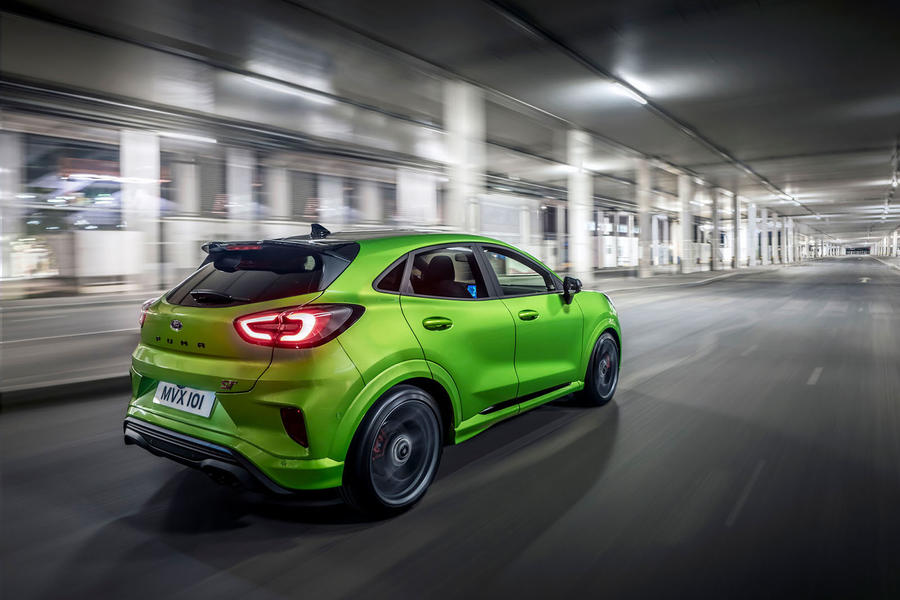 The Puma is, we already know, not the biggest or tallest supermini-based crossover going; and even though the ST version retains the usefully deep ‘megabox’ under-floor boot storage area of the standard car, it’s the kind of crossover much better suited to transporting adults up front and kids in the rear than grown-ups in both rows.

Being a performance crossover hatchback, of course, this is a car whose profile and ride height have gone up to come down again; a bit of a daft notion however you try to rationalize it. The front seats are big-bolstered and supportive, identical to those you’ll find in the related Fiesta ST. They’re particularly comfortable if you’re tall because they retain separate adjustable headrests, which is rare among modern hot hatchbacks which mostly get one-piece backrests with ‘integrated’ head restraints. And the level at which those front seats are set feels neither particularly low nor high, neatly enough. Adjust the cushions as low as they’ll go and you feel like you’re sat at absolutely bog-standard hatchback level, with the Puma’s wider cabin architecture offering decent space for your limbs and extremities but no great expanse of glasshouse or high roofline to give the game away that what you’re driving is a pseudo-SUV at all.

The Puma ST’s on-road temperament isn’t quite as bouncy and tiggerish as some cars of its ilk can seem, but it still feels like a surprisingly vigorous, highly strung thing to drive; moreso, I’ll wager, than most might expect of any kind of crossover vehicle. Using the specification of the Fiesta ST’s suspension as a departure point, Ford Performance has gone for bigger wheels, longer and stiffer springs, but notably much stiffer ant-roll bars (even fitting one inside the section of the car’s torsion beam rear suspension). There are new twin-tube ‘frequency-reactive’ dampers from Hitachi, too.

And so, while a Fiesta ST gets 17in alloy wheels as standard and 18s as an option, the Puma ST gets 19s or nothing. It handles like a hot hatchback that’s wearing footwear just a size too big for it, to be honest. It’s direct and super-responsive to steering inputs even by Ford’s standards; unusually heavy through the steering rim too, as well as very keen to whip back to centre when you’re exiting a corner. It’s sensitive to camber and bump and a little too eager to divert itself over both – even by fast Ford standards. At a guess I’d say Cologne had to accept more wheel offset and scrub radius on the front axle than it normally would in order to accommodate those 19in rims, and couldn’t quite mitigate all of the undesirable consequences with the power steering calibration.

Those 19in rims also make for a slightly abrupt low-speed ride, but at speed the car’s damping begins to smooth out quite nicely – moreso than a Fiesta ST ever manages to, at any rate. If you’re ready to wrestle with it just a little and keep two hands on the wheel, the car has plenty of pointiness and poise about its handling. It's got great lateral body control and turns in really sharply, gripping a shade more securely at the rear than the Fiesta ST sometimes does but still remaining nicely balanced. With the optional slippy diff adding its own layer of traction and involvement into the driving experience, nobody could claim this car isn’t absorbing to take by the scruff.

The engine isn’t block-busting; it feels a little bit meek through the higher gears, and next to it rivals this car could perhaps do with a little bit more outright firepower. It’s free-revving and likable, though, and certainly potent enough to hold it end up while the chassis takes centre stage. 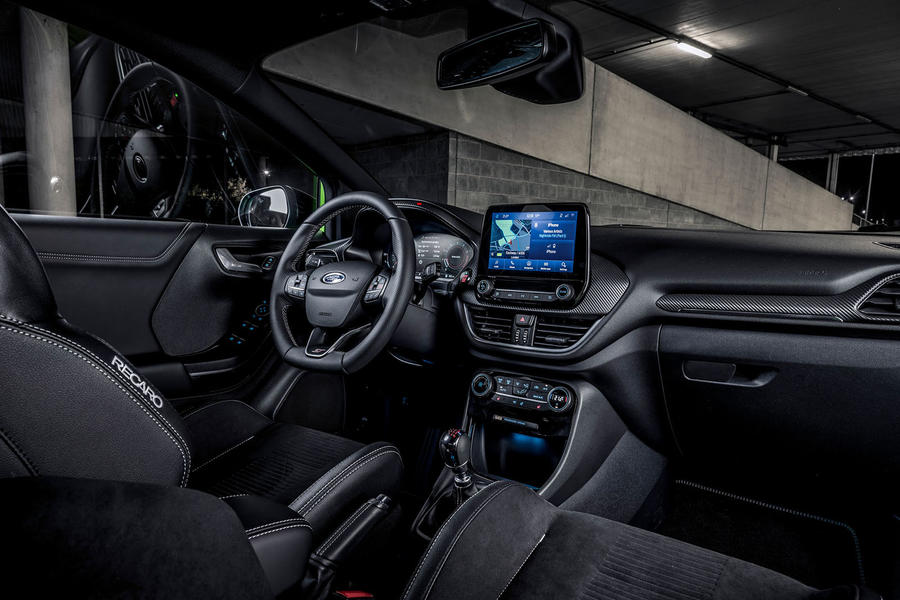 What I find myself wondering is actually whether you would want to live with an extra-practical, high-rise hot hatchback quite this feisty, and to use it every day for any given journey? You might well, but Ford’s own spokespeople freely acknowledge that the Puma ST won’t be for the typical crossover hatchback customer.

It feels like a statement of defiance as much as anything; “yes, okay, we're making ST crossovers now; but we haven’t gone soft, alright?” Well, clearly, they haven’t. And much as I’m not entirely convinced about the car, fun though it is, I do rather like the sentiment. 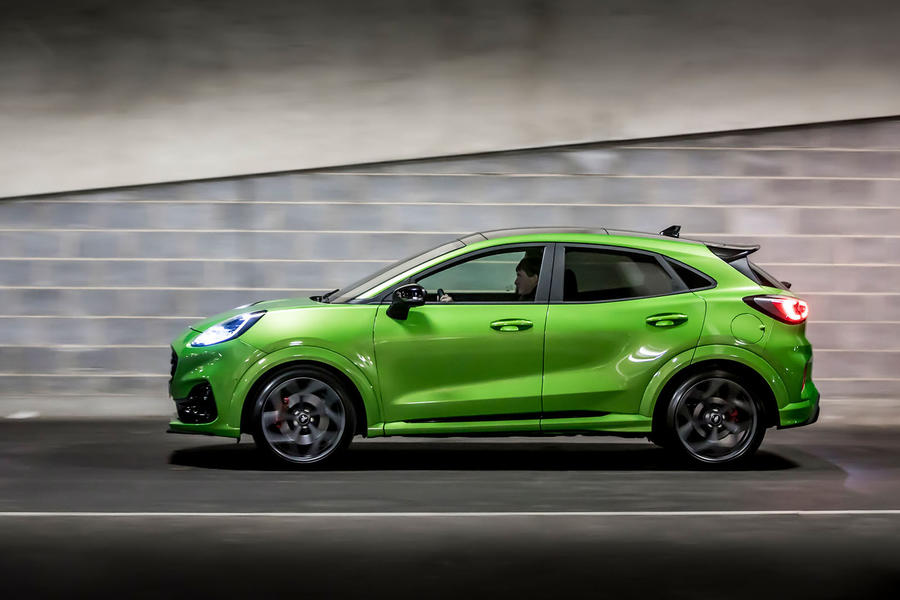 Seems another car spoilt by overlarge wheels. Sounds like 19s are too large but either the designers or marketing team demanded them. Should've had18s as standard and let those who want 19s pay extra. And what is the obsession in every Puma review about this megabox in the boot? It's just the spare wheel well without the wheel. If you want the spare, Ford want £150!

...that looks like a rotting toad corpse you may as well pait it green I suppose.

More room than in a Fiesta as well as spotive. Opt for the Fiesta 17" wheels if that is possible (instead of the 18 or 19" ones). It will improve the ride, and barely take away from cornering behavior.