9
After the four-door's rip-roaring debut at the Circuit of the Americas, how will the 630bhp GT 63 S variant fare on Scottish B-roads?
Open gallery
Close

If you can pull the strings, there's good reason to debut a new two-tonne, five-metre, four-door performance coupé at a Grade 1 FIA-specification racetrack.

If the car can match the 0-62mph time of a McLaren F1 – as the Mercedes-AMG GT 63 S 4-door does – it probably won’t feel too lost on the endless stretches between corners. More temptingly for the manufacturer, such a perfectly surfaced expanse is the greatest hiding place on earth for big cars with poor manners out in the real world.

Mid-winter in Aberdeenshire could hardly be in greater contrast to the Circuit of the Americas, current home of the US Grand Prix and venue for the international press debut of AMG’s four-door take on the GT hot-rod coupé last year (you can read about it, with plenty of detail, here). It's therefore an excellent environment in which to see whether AMG's answer to the Porsche Panamera and challenger to the upcoming Audi RS7 is really worth the £120,000 asking price.

As a quick recap, the four-seat (or, optionally, five) interpretation of the hot-rod AMG GT Coupé comes in two flavours: the 577bhp GT 63 and a £15,000-dearer 630bhp GT 63 S tested here (look for the yellow brake calipers). Both use a version of the AMG's monster 4.0-litre M177 V8, though in the case of the S it is plied with unprecedented boost pressure from turbochargers with a revised turbine geometry and new low-friction ball bearings.

Both get a switchable performance exhaust, 20in alloys and a extending rear spoiler, though only the S gets the AMG Dynamic Plus pack, which includes active engine mounts and, this being 2019, a rear-drive-only drift mode. 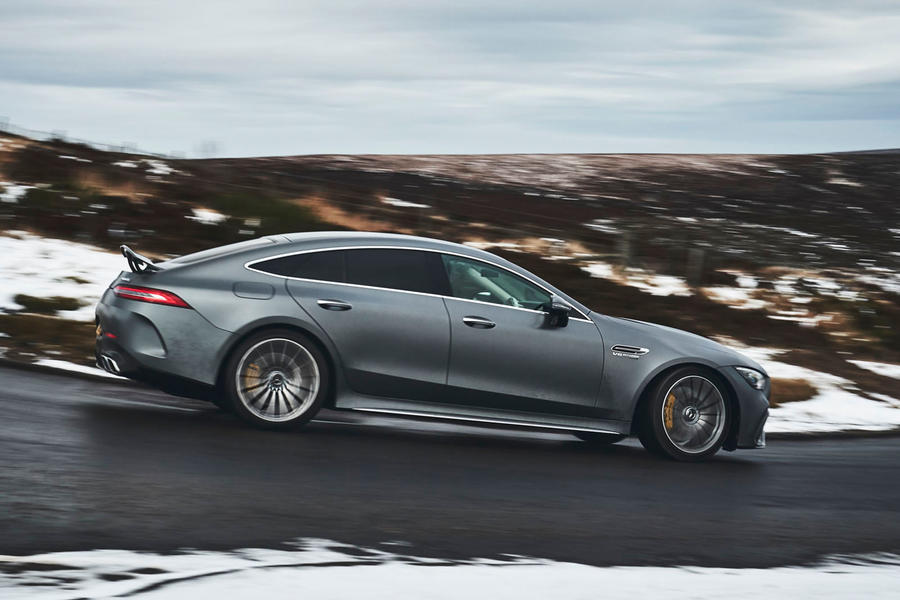 AMG's V8 is as wolfish – and responsive – as ever. Drive the 63 and the 63 S back to back, however, and you can quickly tell them apart. With only 60bhp or so and roughly 70lb ft to separate them, this might seem a contrived observation, particularly in the context of such a heavy car, but where the 63 will surprise you with its pace, the S accelerates with true savagery as it nears the its rev-limit. And then there's the noise, which must add the equivalent of 100bhp to the experience in either case.

And yet this wonderful engine quickly becomes the supporting act. That's because somehow all the chassis technology – four-wheel drive, four-wheel steering, adaptive air suspension and, in the case of the more powerful S variant tested here, an electronically controlled differential with a particularly sharp ‘Master’ mode – combines to deliver an often breathtaking blend of pace, composure and adjustability.

Rather than stifling the driver’s inputs, these systems seem to anticipate and enrich them. As a result, even on smaller roads you’ll struggle to overdrive the GT 4-door and pierce its bubble of stability, and yet with the right approach it’ll steer beautifully on such a torque-rich throttle. Ultimately you're shepherded by the software, but this isn't some lightweight sports car of sublime purity, and in any case, when the process is this finessed, it hardly matters.

That Master mode is a real highlight, and another good reason to opt for the more expensive S if you're serious about driving (which, by virtue of being here, seems likely), because it's only accessible within a special Race drive programme the non-S doesn't get. With the ESP in its mid-way sport setting, and Race selected, the e-diff locks earlier and the electronics will cradle the arcing rear axle, allowing oversteer to a useful degree but never putting the driver at risk of losing control.

In the dry it's probably a bit restrictive, and frankly a front-engined GT with a wheelbase longer than that of an E-Class throws up few surprises with everything turned off. However, on a dark, damp, unfamiliar road, the ability to so easily tap into a rich vein of dynamism – to make meaningful changes to your trajectory with no steering input at all – is nothing short of brilliant. In this scenario, the AMG also feels usefully narrower than a Panamera Turbo, and that's because it is, by a whole 100mm. Raising two fingers to convention, in the 2045kg GT 4-door, B-roads are your friend.

But there's also much to enjoy at a less frenetic pace. AMG has managed to infuse into this chassis the same low centre of gravity and distinctly rear-biased balance from the GT Coupé, therefore distancing the GT 4-door from the similarly quick but £50,000-cheaper E63 S. Along straighter roads the car's gait is long and laid-back, with torque only diverted to the front axle if it's really needed. It never feels anything less than a thoroughbred, and with the suspension in Comfort you'll carry not only all three of your passengers in enviable refinement, but also 40mph more than expected.

Fact is, sitting on the same MRA chassis that underpins the E-Class and CLS does the GT 4-door no harm, and the civility of its motorway manners is undermined only by a slight harshness over poorer surfaces. Certainly, this car justifies its initials with an ability to compress huge distances arguably better than any Mercedes other than an S-Class, which is remarkable given its dynamic talents. Just don’t expect it to glide around town with quite the same sense of detachment as an E-Class or an S. Or achieve more than 20mpg at a cruise.

The E-Class roots are evident from the inside, too. The transmission tunnel is stradled by fat fascia embedded with buttons and the stubby gearlever that's a hallmark of all AMGs, but the dashboard itself, with its turbine vents and digital screens, closely resembles that of the saloon.

In this very early build car, some of the switchgear didn't operate as crisply as it should, and in more general terms the GT 4-door feels a step behind the cabin quality of rivals from Porsche and Audi, whose interiors now seem to exhibit no flex in any of the fixings. However, next to the AMG, those cars seem to have had something of a charisma bypass, and the GT's Performance seats are also exceptionally comfortable. Just make sure you opt for the nappa leather dash – Mercedes' synthetic Artico alternative doesn't do the place justice. 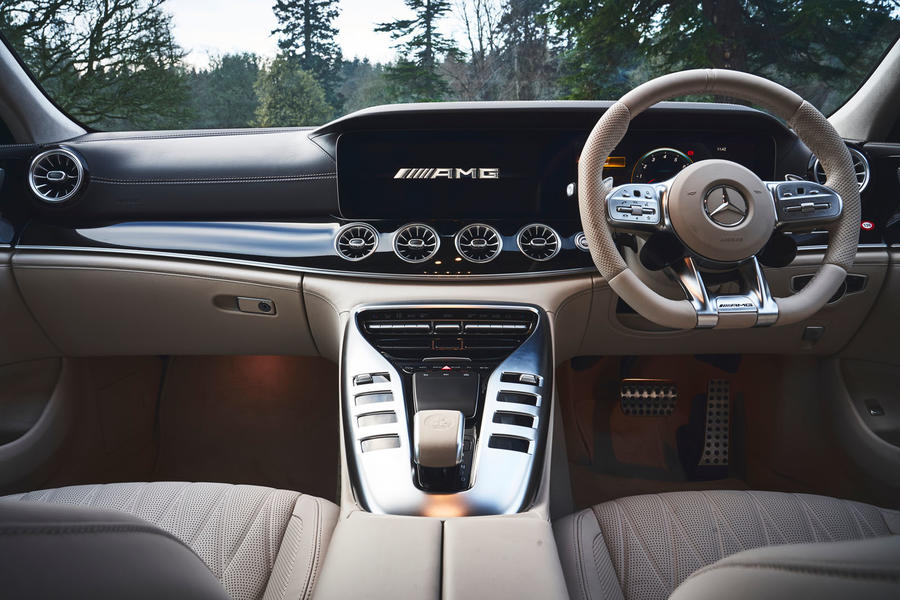 A car conceived thus could easily have turned out as a poor amalgam of the E63 S saloon and the AMG GT Coupé. I almost expected to find an overly firm chassis attempting to beat the road into submission while the engine did the same for the chassis.

But the GT 63 S 4-door is more intelligently judged than that, with its own enjoyable character and sweetly balanced set of priorities. With its effortless pace, approachable but rewarding handling and larger-than-life powertrain, AMG has identified what it is buyers in this class want and then executed it almost to perfection.

A definitive verdict will come, but if you can forgive the AMG a small deficit in ultimate handling precision to the Porsche Panamera, it probably does enough to be considered the new benchmark in this class. And not only in terms of everyday appeal, but also straight-forward fun. 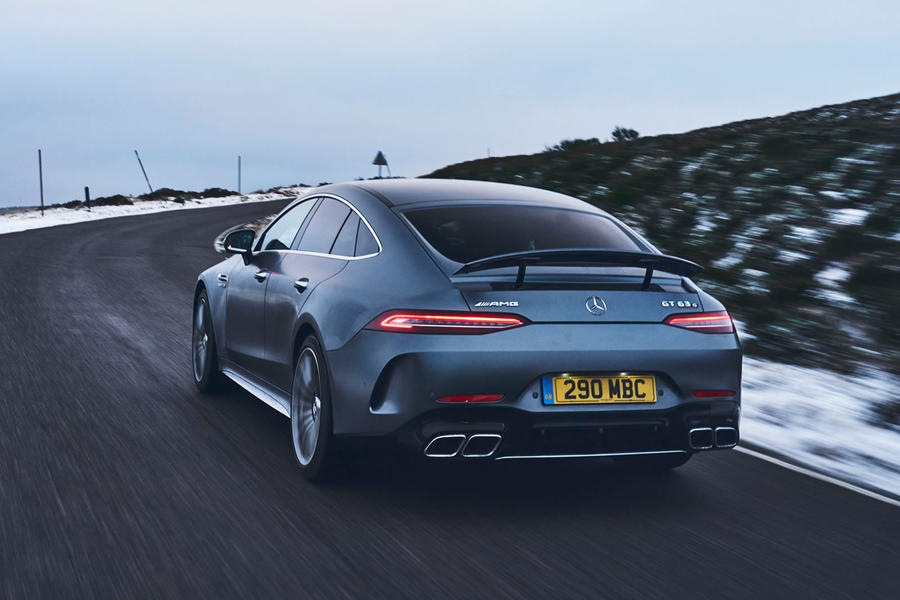 I noted that in Autocar's list of slow selling cars, the more stylish Rapide is close to top dog. I'm guessing it's because both I and people with £135,000 plus to spend on a new car, can't find much point in a funny looking 4-door coupe. And while 664 lb ft might appear at least intriguing, it is not on anything but a bone dry road, of much value.

Best car in the world?

I can't remember the last time I read so many universally effusive reviews of a new car - even the Alpine comes in for some criticism of its cabin.
View all comments (5)