The recent rationalisation of Jaguar’s XF has cut prices in eye-catching fashion. As you may have read elsewhere, there are now only three engine options available and four trim levels, in addition to the choice between four-door saloon and five-door estate bodystyles.

Never mind an equivalent Audi A6 or similar, though: the mid-level, mild-hybrid XF D200 diesel wagon we’re looking at here is more than £5000 cheaper than a like-for-like Audi A4 Avant in TDI S line quattro trim at list price. Don’t expect a discount on the Jag, mind you. With this realignment, the firm says, the price you see is the one you’ll pay - but, thankfully, it sounds as though you won’t mind that too much.

Has Jaguar finally got this car’s specification and position right, then, just as so many fleet drivers are wedded to living their motoring lives in high-riding SUVs, and others are moving into electrified options? We’ll see. There’s certainly no plug-in hybrid model in the XF range, and the word is that there isn’t one coming, either. Still, Jaguar is anticipating plenty of interest from fleet drivers opting out of their company schemes with car allowances, and from those simply buying with their own money. And exactly how long those options remain financially viable on a combustion-engined car like this isn’t something that’s in Jaguar’s control, so the company is probably right not to worry about it anyway.

The 2.0-litre four-cylinder Ingenium diesel powering our test car is the most economical and the cheapest engine in the new XF range, for which is claimed a WLTP combined fuel economy of up to 54.2mpg (D200 RWD Sportbrake) and CO2 from 137g/km. 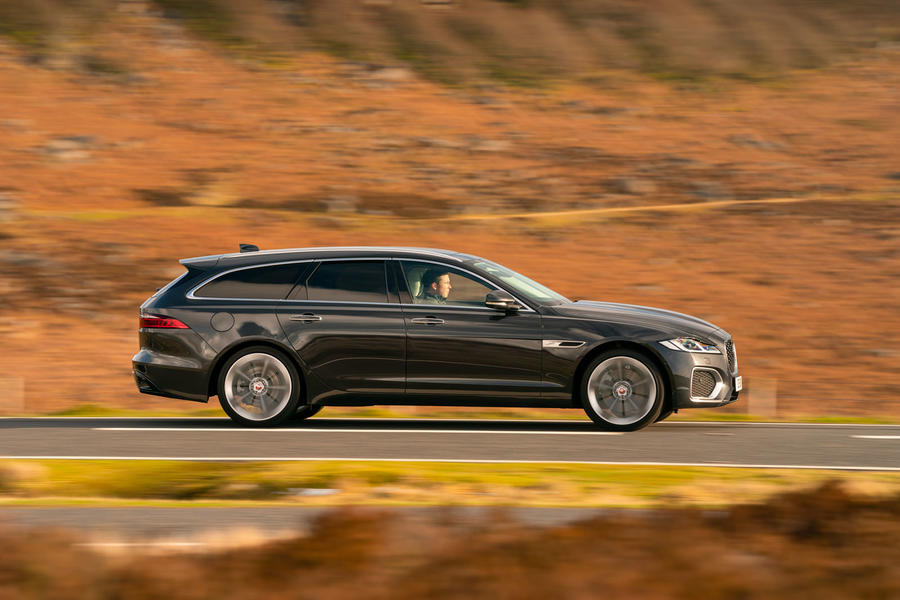 Plenty of mid-cycle facelifts may be about little more than a new stereo system here or a fresh set of instruments there, but this really isn’t one of them. The XF’s interior will be near enough unrecognisable to plenty of owners of the existing car.

The tastefully dulled, subtly sculptural chrome trims immediately catch the eye, but when you explore the darker corners of the driving environment, you find matching perceived quality improvements in other places, too. The car’s various clusters of buttons and knobs, on the steering wheel and the centre console, are much more neatly presented and better finished than they used to be as well. Remember that black rubberised look and feel that the car’s secondary switchgear used to have? It looked all right for a bit, but you’d have bet on it wearing badly. Well, that’s all gone, replaced by chunky-feeling chrome window switches and illuminated toggle buttons on the steering wheel's spokes.

The XF’s new Pivi Pro infotainment screen - some 11.4in on the diagonal, a lot squarer of aspect than the old car’s set-up, and with a slightly convex display that makes it appear to hug the curve of the dashboard quite nicely - is also a huge improvement on what went before it. It’s standard on even entry-level S-grade cars (although the new widescreen digital instrument pack, which is also very good, isn’t), and it’s easy to use and - as far as we could tell on a two-hour test drive - reliable and robust with its software. The line of shortcut buttons on the left of the display and the easy configurability of the home screen to suit the functions you access most often are as key to this as the system’s responsiveness.

Seat comfort up front is very good. If you’re taller, there’s a chance you might notice a slight shortage of telescopic steering column adjustment range, or the closeness of the car’s roofline, because the XF has never been the biggest or most accommodating of executive options. Compared with the latest BMW 5 Series and Mercedes-Benz E-Class, its back seats in particular do feel relatively small, although they’re still usable and comfortable for all but the tallest adults.

Boot space is a very useful 550-odd litres up to the window line, although you lose the car’s underfloor storage if you go for mild-hybrid diesel (which carries its 48V battery and power inverter under there) whereas you’ll keep it if you have a P250 or P300 petrol version instead.

Not that I’d let that put me off. This new gently hybridised Ingenium diesel does have the occasional funny driveline engagement when you’re just tipping into the throttle pedal, as it juggles that transient blending of its electric and combustive power sources. They’re pretty rare, though. Most of the time, it just offers usefully stout-feeling mid-range torque, paired with good refinement and equally good economy for a car of its size. During mixed-speed touring, I suspect an indicated 50mpg would be achievable with a fairly light load on board.

Jaguar’s Ingenium four-pot diesel engines seemed a bit vocal and meek, teamed with what could feel like dull-witted transmissions, when they were introduced five years ago. This phase of mild hybridisation has made a perceptible difference to how torquey they feel on the road, though, and mechanical isolation has been incrementally improving over the years in parallel. (The new XF has an active noise cancellation system that works to dampen the effect of its various sources of noise on your senses.)

The car’s eight-speed gearbox may be the last piece of the puzzle for Jaguar to sort. It still seems to hesitate at times, but also to rush its engagements and actuations at lower speeds and at other times. It isn’t the sharpest-feeling thing, either, when you start to flick the nicely chunky, metallic shift paddles the XF now has, but that shortcoming isn’t enough to take the shine off what is a very rounded and increasingly well-polished powertrain.

This diesel, and Jaguar’s lower-level P250 turbo petrol, are now the only XFs that can be had with a rear-driven mechanical layout. (The diesel can be had in four-wheel-drive form, too.) If you’re attracted to this car for the reasons we’ve always rated it as pretty consistently the best-handling and most rewarding mid-sized executive option on the market, it’s certainly worth seeking out one of the rear-driven options.

Our test car (on optional 20in alloy wheels and adaptive dampers) rode with the suppleness and fluency you’d expect of a mid-range Jaguar, but also handled with fine cornering balance and a clear but progressive sort of incisiveness that made it an easy pleasure to simply guide along. Steering isn’t overly direct but it’s accurate, intuitive and perfectly weighted, with no perceptible spongy or elastic feel, so you can place the car with confidence and judge grip levels similarly.

There’s enough torque to momentarily animate the chassis into gently positive attitudes around slower bends, and generally to engage with a rear-driven executive car with a sensible but not overwhelming grip level and a healthy dose of natural handling poise the way that a keener driver might like to. The XF has modern driver aids and electronic convenience features, but they’re fully switchable ones and, by and large, they don’t come between you and the enjoyment of the driving experience.

The one mechanical difference between an XF saloon and Sportbrake remains the wagon’s fitment of self-levelling rear suspension, which is there to compensate when hauling heavy loads or towing. It doesn’t impose any undesirable dynamic tolls on the car, though. Ride isolation seems equally good at the back as it is at the front axle, and the car’s ride frequency is very well balanced over longer-wave inputs. 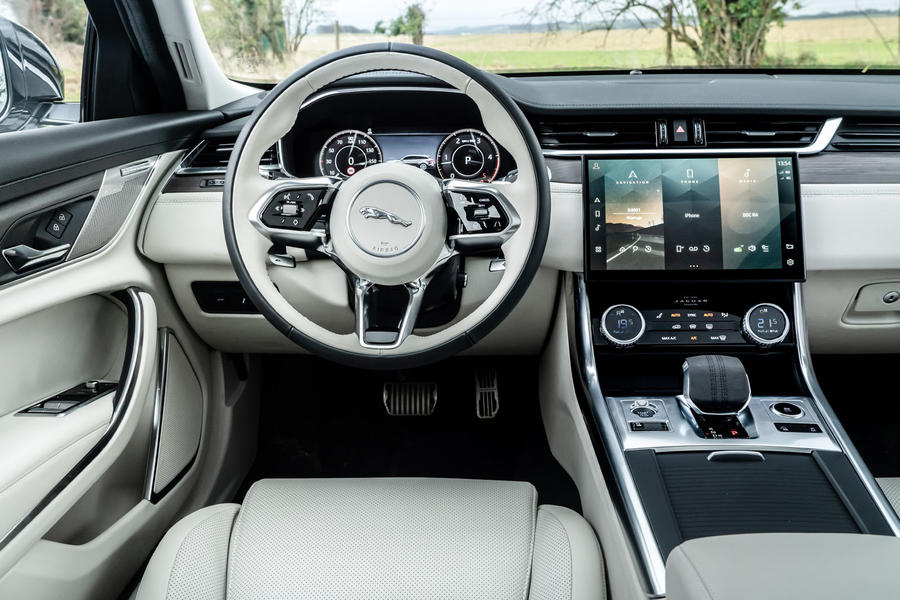 As unlikely as this may have seemed 10 years ago, this could be Jaguar’s last throw of the dice with a classic mid-sized saloon. It has simplified and streamlined the XF’s line-up as much as it can, to take both cost of production and complexity out - and with some success.

At the same time, it has clearly done its utmost to put refinement, sophistication and luxury feel back into this car and has worked effectively there, too. You do get a sense that it may all be so that they’re able to stand back and say “we gave it our best shot, you know”, when the last old-school Jaguar four-door rolls off the Castle Bromwich production a few years from now. I suppose only time will tell.

Clearly, Jaguar can’t hold back the tide of change in the new car market, much as it may be able to take a slightly bigger slice of a pie that’s shrinking with every year that passes. With this revised XF, it certainly deserves to do that much. And with its replacement, sad as it may seem, less traditional thinking is clearly what’s required. 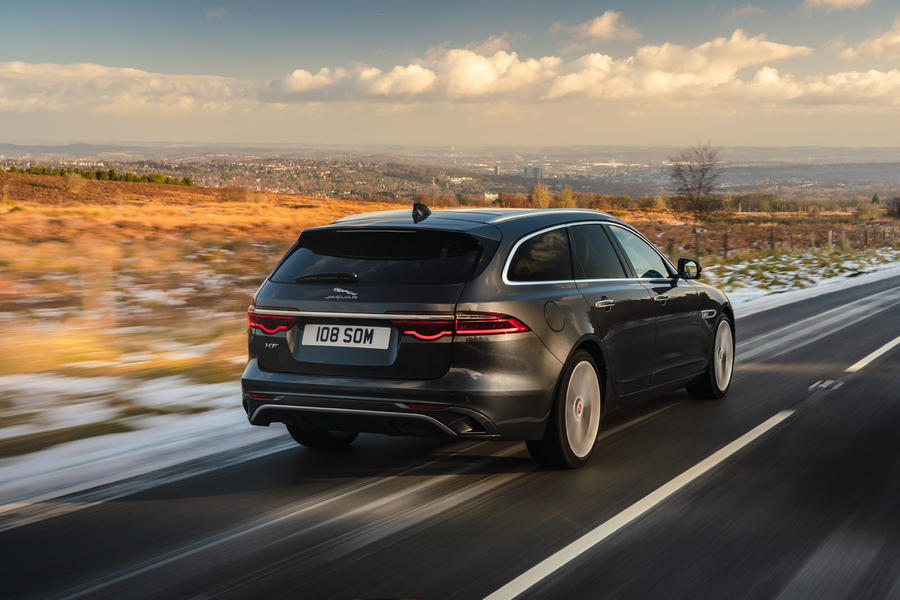 Log in or register to post comments
geed 2 February 2021
Totally agree rhwilton. Many prefer the higher driving position of the suv (I do not - I want to sit in a car, not on it)....but to compromise so many other aspects of the car.

Clearly, there is a lot wrong with people.

Autocar your comments section is rubbish...rejects all my text when I quote and reply to comment....and all the pop up adverts hiding the text I am writing
Poor and disappointing.

The price adjustment should do wonders for the residuals of my '68 plate. Thanks, Jaguar - there's nothing like peeing off existing customers for possible newcomers...