This is the new Citroën C5 Aircross. Well, sort of. You see, while the family-friendly French SUV has been treated to a mid-life refresh, the makeover is more cosmetic nip-and-tuck than ground-up, nut-and-bolt in its approach.

Yet in many respects, it’s not hard to see why Citroën played safe with its C-segment offering, which has proved to be a bit of a sales hit for the brand. Not only is this corner of the market continuing to grow, but also demand for the old model remained strong to the end, despite the pressures of the pandemic and the ongoing supply-chain crisis. 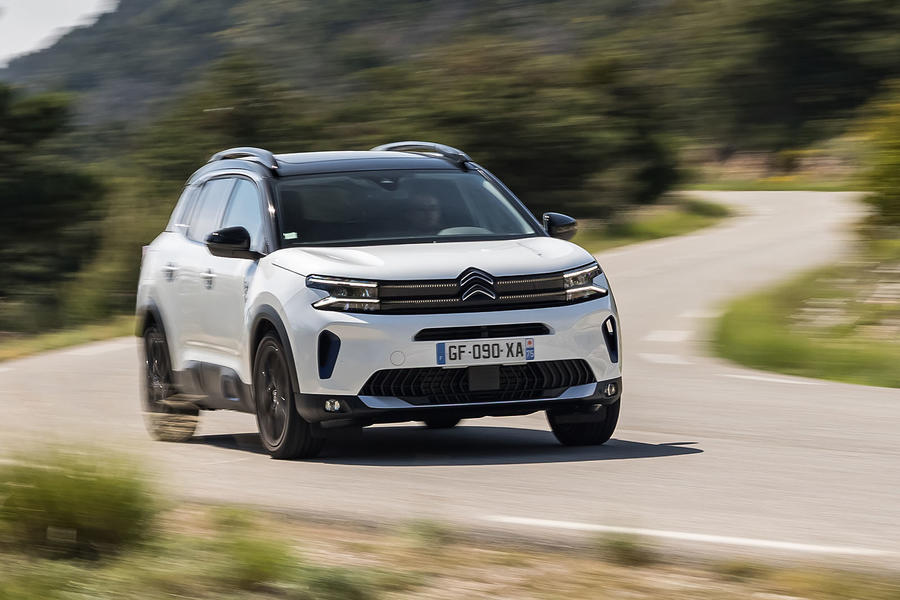 So what is new? Well, the most obvious changes are the on outside, where there’s a new grille and headlights, plus reprofiled bumpers and some rough-and-tumble skidplates. There are also some 3D-effect LED light clusters at the rear, a few extra colours and revised alloy wheel designs.

The result is a sharper-looking machine than before, with the LEDs in particular adding some extra head-turning kerb appeal. What’s even more impressive is that this neat update has been achieved without changing any of the sheet metal.

It’s a similar story inside, where there’s now a slick-looking 10in infotainment touchscreen mounted on top of the dashboard, plus a subtly tweaked centre console with a new toggle-style gear selector. A smattering of smarter materials have also been sprinkled around in an effort to up the premium appeal. Oh, and the already squidgy seats get a new memory foam insert for even greater sofa-style support.

Finally, the line-up has been given a small shake-up. The mid-ranking Shine model remains, albeit better equipped, but the entry level version is now the Sense Plus, while at the top-of-the-range is the C-Series Edition, which gets all the bells and whistles. 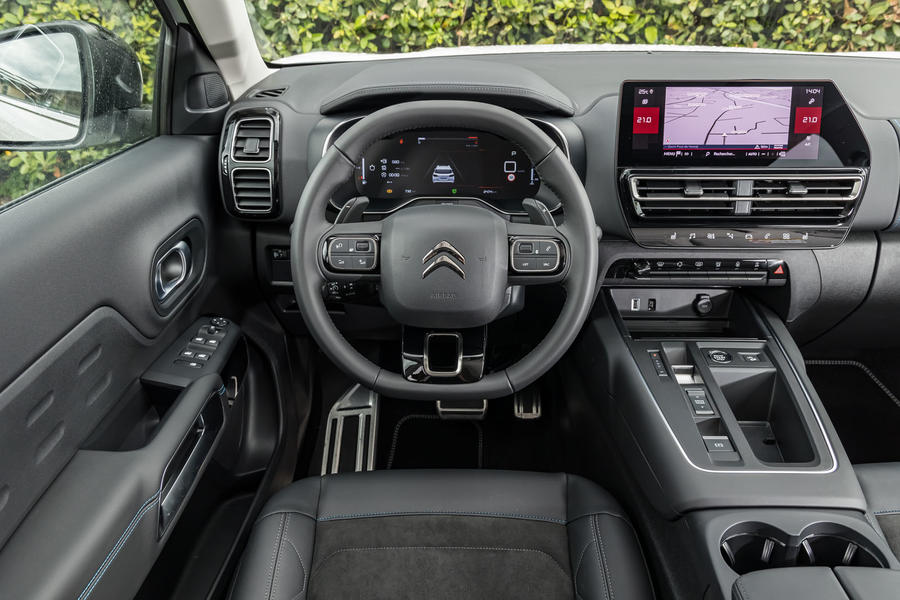 If you’ve driven the old C5 Aircross, there’s lots that will be familiar here, because it’s essentially the same car. While the exterior and interior have been under the knife, the mechanical bits and bobs have been left almost completely untouched. That means you get the same commitment to comfort that made the original an easy-going rather than exciting choice – and, given its workaday remit, that will be just fine for most of the people most of the time.

As before, the steering is light and lifeless. When you're really pressing on, there’s some wallow and heave through bumpy corners and quick direction changes, plus understeer scrub at the limit. That said, overall grip levels are actually quite high, while body roll itself is surprisingly well checked.

Dial it back, though, and the softly suspended C5 Aircross has a pleasingly languid gait that makes it a stress-free steer for daily duties. It floated along the well-surfaced but bumpy roads of our French test route in a manner that used to be a double-chevron calling card.

We drove both the 128bhp 1.2-litre petrol and the 222bhp plug-in hybrid (there’s also a 128bhp diesel), the former proving refined enough bit a little overwhelmed by the car’s avoirdupois, the latter punchier and delivering 38 miles of electric-only running – but better suited to business users looking to bring down their BIK tax bills (Citroën claims forthcoming updates will increase the range to 40 miles, dropping the liability from 12% to 8%).

The PHEV also transitions fairly slickly between fossil fuel and lithium ion power, while in the latter mode it offers reasonably brisk and near silent progress up to 84mph.

A six-speed manual gearbox is available with the petrol and diesel, but both the cars we tried were fitted with the same smooth but slow-witted eight-speed automatic.

Like the driving experience, the rest of the C5 Aircross is very familiar, which means it's one of the more spacious and versatile machines in its class. There’s plenty of room in the back, with a fairly flat floor, plus the three individual rear seats slide and recline to deliver flexibility and comfort - although only the two outer chairs get Isofix mounting points.

There’s also loads of handy storage, while the boot is a very useful 580 litres (reduced to 460 litres in the PHEV, as it loses the variable-height boot floor but retains enough storage beneath to house some charging cables).

As before, the interior is attractively styled and despite some scratchy plastics lower down has a reasonably upmarket feel. The revised seats make up for in long-haul comfort what they lack in lateral support, while the new infotainment system looks good and is responsive but still requires you to enter a sub-menu to adjust the air conditioning, which is as frustrating as it is an unnecessary distraction from the road. 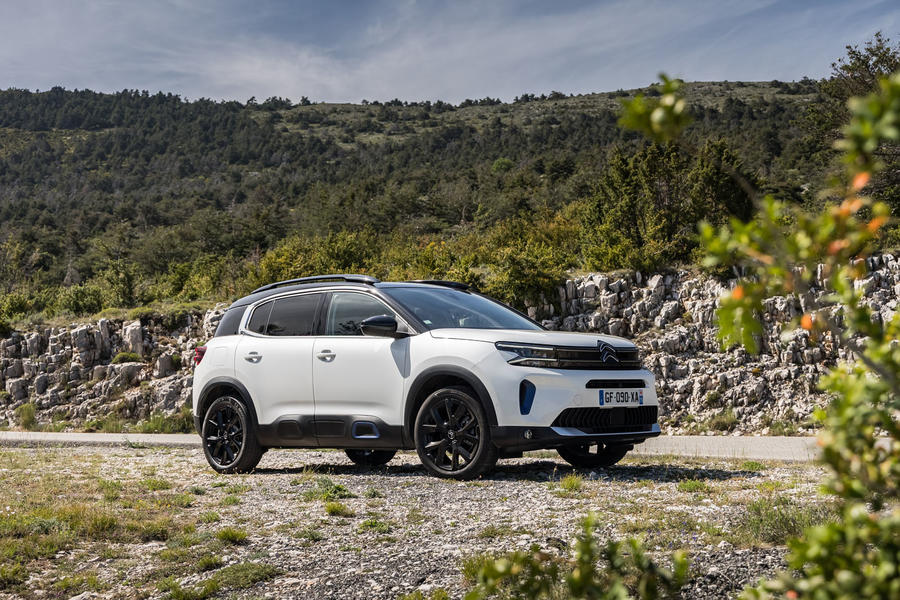 As with the old C5 Aircross, there’s very little to get the keen driver tingling with anticipation here, but then to drive this Citroën like you stole it is rather missing the point. As a distinctively styled, practical and decent-value SUV (prices start at just £26,175) that’s more comfortable and relaxing than most, it deserves consideration.

Yes, the Kia Sportage and Skoda Karoq are more engaging options, plus the C5 Aircross still has one or two foibles (the ride comfort is still inconsistent and the powertrains are average at best). But as workaday family hack that helps keep stress levels low, it’s not without its charms.

If the fake SUV or crossover is for you then in it's lower trim lines coupled with the petrol engine the Citroen C5 is a pretty good deal for a family car with plenty of space and sort of funky looks. The PHEV version seems to be expensive for the non company car user and with it's striking looks a better colour choice would be good

Must you mention this in every citroen review? If you must, at least add that it is a lot better than in most other cars with the exception of those priced twice as much.

Realistically 4 times as much these days

Must you mention this in every citroen review?.

Why not, you babble on at every oppotunity to tell us you can't tell the difference between a Disco and Defender

Besides, I started to enjoy reading your replies. It's not difficult to turn on a nationalistic brexiloon - just say something negative about his beloved Slovakian made Indian car :))