From £25,3607
Citroën's first Nissan Qashqai rival took a year to leave China, but has now been driven in European spec for the first time
Open gallery
Close

The C5 Aircross is a car that Citroën should have launched years ago. The French brand has never offered a true Nissan Qashqai-rivalling SUV in the UK: the C4 Cactus is too small, and while Europe got a reskinned Mitsubishi ASX in the form of the C4 Aircross, it never came here.

Though we’re driving it for the first time here, the C5 Aircross has been on sale for more than a year. Citroën prioritised China as the volume market, first unveiling the car in Shanghai in April 2017. It’s due to land with British dealers before the year is out.

By taking its time to bring this car to fruition, Citroën argues it has been able to take a considered look at the segment’s offerings and pinpoint exactly where the C5 Aircross should be targeted. And it’s decided that comfort and practicality are two qualities conspicuous by their absence.

Unsurprisingly, the new car sits on the PSA Group’s EMP2 platform, shared with its Peugeot 3008, Vauxhall Grandland X and DS 7 Crossback siblings. All of the important oily bits from those cars are carried over to Citroën's SUV, including a broadly identical engine range. But, aside from the cheerfully un-aggressive styling, there are a few unique features.

It’s the second model, after the C4 Cactus, to make use of Citroën's rally-derived Progressive Hydraulic Cushion suspension - unique to the brand - which aims to revive some of the ‘magic carpet’ feeling old Citroens with hydropneumatic suspension were renowned for, but without the complexity. 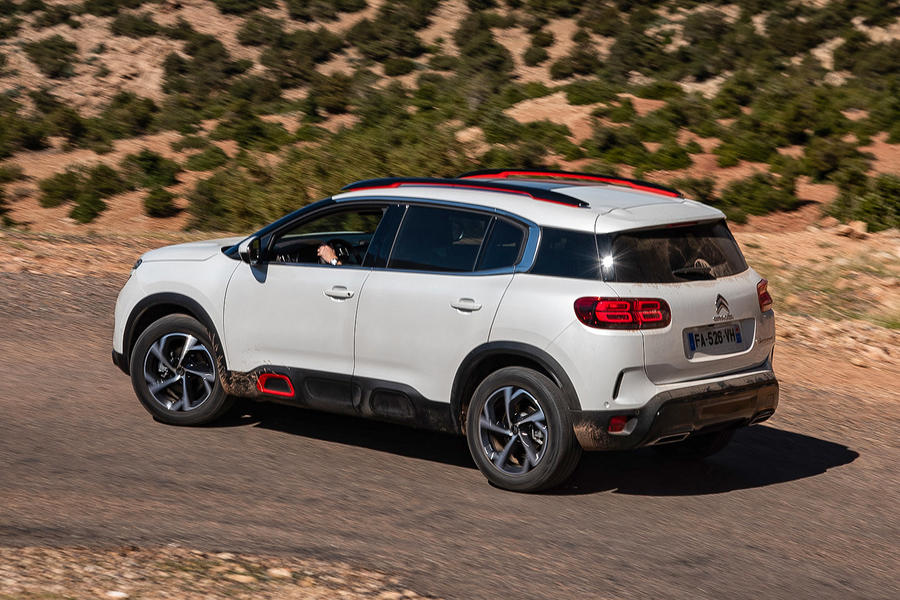 It is fundamentally good enough to compete with the class average, but the C5 Aircross doesn’t quite match up to Citroën’s marketing pitch in the areas that matter.

The brand’s confidence in its new SUV is such that it decided to launch the car in Morocco, a country where roadbuilding is best described as hit and miss. The challenging route took in highways, broken mountain roads and unkempt dirt tracks, giving us ample opportunity to put Citroën’s claim of this being “the most comfortable SUV in its class” to the test.

Climb aboard and first impressions are positive. The seats are the stand-out feature - softly trimmed and thickly padded, they initially feel a touch too cushy, but prove surprisingly supportive on the move.

A multitude of colour options help give the cabin a light and airy feel, and the standard-fit digital instrument display is more configurable than most. We’ve no complaints with the adjustability of the driving position, either, with this 6ft 2in tester able to quickly get comfortable.

Closer examination reveals some familiar Citroën foibles, however. Trim quality at the usual touchpoints varies from surprisingly plush to somewhat below-par, particularly on the flimsy-feeling door cards, while the brand’s infotainment system remains irritatingly laggy and difficult to operate on the move. There are now menu shortcuts below the screen, but they are touch capacitive rather than physical buttons, and as such are a hindrance rather than a help.

The C5 Aircross fulfils its promise of best-in-class practicality, at least. Three individual, equal-width rear seats slide, recline and can be removed entirely, while the only black mark in terms of space is the significant rear headroom reduction with the panoramic sunroof fitted. With those seats slid all the way forward there’s a very generous 720-litre boot, and in the centre console there’s a huge chilled compartment.

The dynamic premise of the C5 Aircross is one we can get on board with. Many SUVs accept some compromise over their hatchback equivalents due to the extra bulk and higher centre of gravity. Often the solution is stiffening up the suspension to mitigate excess body movement, resulting in a less-than-cosseting ride on pockmarked British roads.

Citroën's unique (and patented) suspension concept adds a pair of secondary hydraulic dampers to each suspension coil, replacing the usual rubber bump stops. The larger the bump is, the more cushioning they offer, and they allow the fitment of softer springs and dampers.

In reality it’s not quite as transformative as it seemed on the first version we tried back in 2016. The initial softness is promising, and the system is adept at cushioning you from less demanding roads. But it doesn’t seem a great deal better than the class average at absorbing large impacts. Throw in a succession of potholes and the illusion of composure is lost, too; the body stays largely level but suspension movement is clearly felt (and heard).

It’s far from uncomfortable, but even on our relatively modest 18-inch wheels the hydraulic system doesn’t give the stand-out plushness of ride we were hoping for. Still, noise isolation is impressive, with wind, road and engine sound all deftly suppressed.

It’s a pity, because a super-smooth ride would make it easier to forgive the C5 Aircross’s laid back approach to handling. Nothing about this big, soft Citroën's dynamic make-up encourages you to corner with excess vigour or bounce off the rev limiter, making the Sport button seem superfluous. You have to hold it down for a good few seconds to activate it, almost as if the car is giving you a moment to think about the absurdity of what you’re doing.

The overly light steering retains the synthetic feel we criticised the 3008 for but with none of the directness. Grip is reasonably strong, yet the pronounced body lean and lack of damping sophistication discourages you from exploring its limits. There’s also a fair amount of dive under braking. Even by the modest standards of the class, the C5 is not a car you’d relish taking the long way home in.

A relaxed driving style suits the powertrain we’ve got here. It’s the 178bhp 1.6-litre turbo unit doing service in several PSA Group models, mated exclusively to an eight-speed automatic transmission. It’s probably the powertrain of choice if refinement is key, as it delivers its power in a smooth and subdued manner.

It’s reasonably brisk as the stats suggest thanks to a punchy mid-range, but it’s held back by a gearbox that, when asked to promptly kick down, can hesitate over which of the many ratios it should select. All things considered, it’s a competent enough powertrain in a class not over-endowed with thrilling engine options. 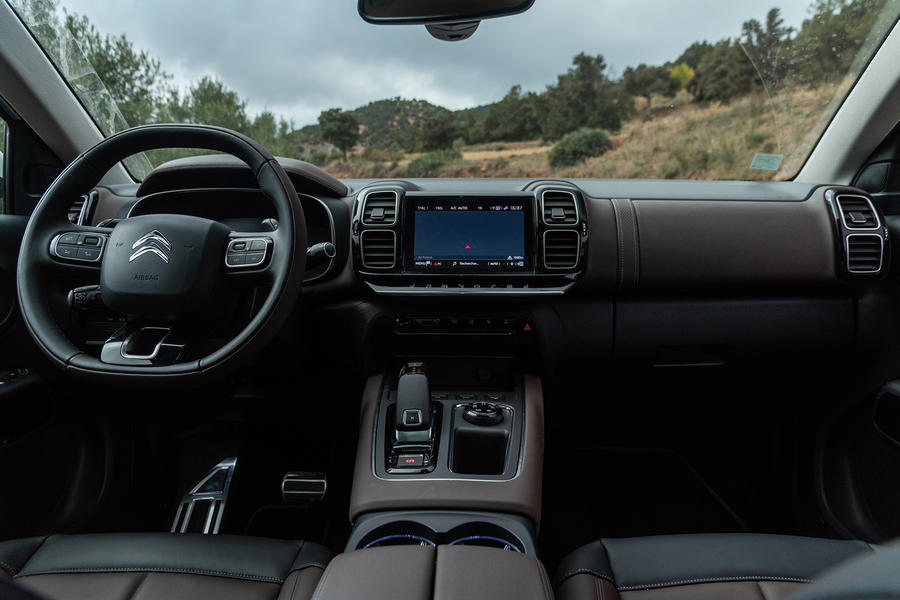 Despite our dynamic criticisms, a typical family buyer would find enough to like about the C5 Aircross’s easy-going nature on the road, and we suspect it would make a very good motorway companion.

The design and interior ambience are enough to help it stand out visually, while competitive pricing and a practical cabin means it’ll likely achieve what’s expected in the sales charts. Yet the expectation of a revolutionary level of comfort afforded by trick suspension just hasn’t been met.

As it is, the Citroën is probably slightly better than average in terms of ride quality, but it’s not at the level where the soft handling becomes a forgivable trait. And that’s a shame, because the world needs more smooth-riding SUVs. 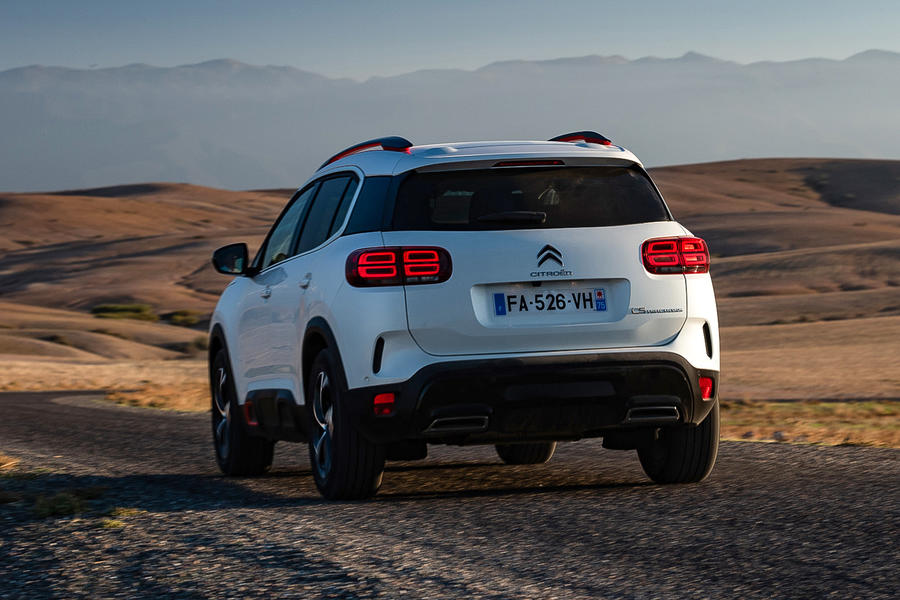 Citroen has never had a

Citroen has never had a qashqai rivaling suv, what about the c-crosser? The one based on the Mitsubishi outlander? As for this, I await a uk roads test drive.

Yet another car damned...

Mainly concerned with dynamics, some plus points, very few other 4.5 metre SUV's with 180bhp and autobox below 130g/km (often applied company car ceiling) if you want a petrol to get away from diesels.

Equipment levels are high, you won't get adaptive cruise with lane keeping function in a Landrover at these prices.

It seems strange Citroen would sign off the release of the car if the suspension its promoted for doesn't really perform that well, so I look forward to testing it for myself.

I think the real competition for the Citroen will be the CR-V Hybrid due around the same time early next year, early indications are it rides well with high refinement, high equipment levels and will also be about 180bhp auto (no gearbox actually), but will also be in a choice of 2 or 4wd with similar emissions as the Citroen.