It’s hard to choose a Caterham, although browsing the firm’s configurator is one of life’s simple pleasures. Once, they’d post you a price list, you ticked some boxes and then sent it back with a cheque. These days the hours lost to it are the same but more interactive.

The choice has just become more complicated. Caterhams mostly look the same, but there are always a bunch of different models in the range, and they change them often to keep interest up. Sevens are a bit like classic Land Rovers: you could have more than one even though ultimately they all do the same thing. Eventually you’ll get drawn to your ideal version. Most of us have got one. I used to own mine.

It marks the return of a 660cc three-cylinder turbocharged Suzuki lump to Caterham’s range, which disappeared from sale for a couple of years while the engine was between generations (from K6A to R06A, it says here).

Caterhams sell well in Japan, where they like classic British sports cars. And Caterham thinks that some 80% of new Sevens that go there will be 170s. There’s a business case to create the 170 for Japan alone, but if you’re going to make something as significant as the lightest Caterham, you might as well sell it everywhere.

There are two versions of the 170, just as there are most Sevens. YoucangetanRoranS:theRismore racy, the S more roady. I’ve driven them both but mostly the R, which is the orange one pictured.

In either form they’ve got 84bhp at 6500rpm and 86lb ft at 4000- 4500rpm, and when you remember that power and torque are the same at 5252rpm, it suggests how flat the power curve is at the top end. It’s also Caterham’s least-polluting car, at 58.4mpg and 109g/km, which, given that it can hit 60mph in less than seven seconds, shows what saving weight and reducing frontal area can do for you.

The engine drives through a five-speed gearbox. The R gets a Quaife ATB limited-slip differential fitted to the Suzuki rear axle, while the S doesn’t. The R also has a sports suspension pack (essentially, it lets you adjust ride height), a carbonfibre dashboard, composite seats, four-point harnesses and some non-mechanical ancillaries. The S gets standard weather gear, a heater and carpets and costs £22,990 to the R’s £23,990, if you build it yourself, which I’d recommend doing. If not, Caterham will for £2395.

As with other Sevens, it’s easy and desirable to up-spec them from there. This orange car has highlights including a track-day roll bar and the carbonfibre side and rear panels and front wings that help it down to the record kerb weight.Even at around £30k all in, it’s still a cheap way to get into a Caterham.

I hesitate to mention finance for a car like this, but if you put £6000 down, you can have a 170 for less than £200 a month, with an £11k balloon payment that, given solid Seven residuals, ought to leave you a fair bit over for another deposit. 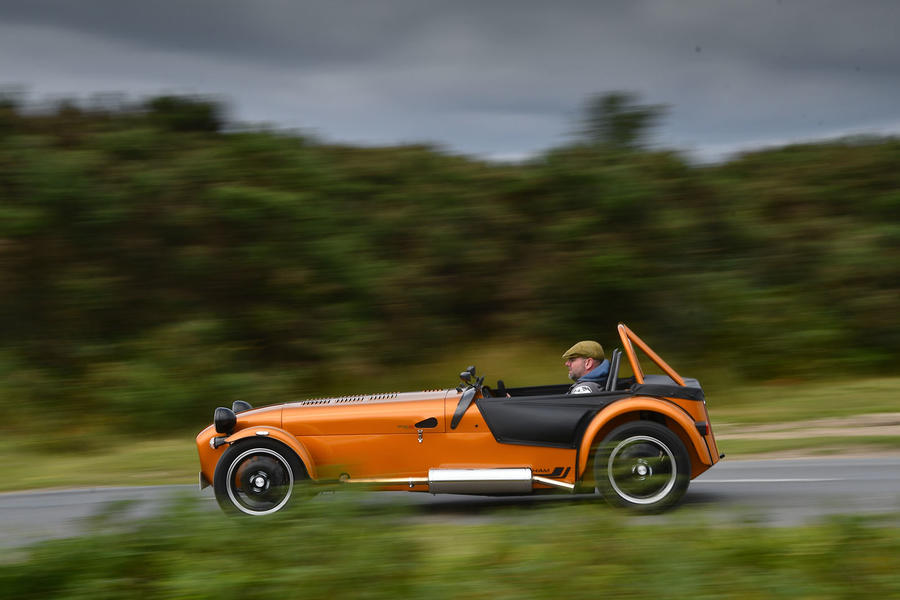 We enjoyed the old 160. It wasn’t always our testers’ favourite Caterham and we didn’t envisage current Seven owners swapping into one, but as a way into Seven ownership it was charming. The introduction of an R brings some aggression to that three-pot charm for the first time.

I like a narrow-bodied Seven – it feels in keeping with the lightweighting ethos. An optional lowered floor makes the driving position low-slung and snug in the composite seats, and with harnesses too it feels much more serious from inside than the power output and wheel size would have you believe.

From the outside the same is almost true, were it not for these standard convex alloys that wear 155/65 R14 tyres. They look a bit like hubcaps and give an aura of Goodwood’s Settrington Cup toy car racers. I’d still prefer the old 160’s steels but presumably they’re not as light. Suzuki’s stud pattern means other Seven wheels don’t fit, and the tyres would be quite wide for this amount of torque, or lack of it.

The little Suzuki engine doesn’t sound much noisier than a toy car at idle either. It’s an extremely quiet engine and I think there’s a lot to like about that. We shot photos in a touristy forest area and nobody batted an eyelid to the frequent stopping and turning and pulling away. In a typical Caterham with a side-exit competition exhaust, they’d get tired of the ‘brap’ pretty quickly.

That doesn’t mean it sounds uninvolving, though. A triple is appealingly off-beat of itself, but there’s also a particularly sweet chirrup on the overrun, so it sounds like no other Seven.

It doesn’t respond like any, either. The throttle response is a bit zingy and elastic, which takes a bit of getting used to. The ride is pretty good, and better still on the S version. Eventually the lightweight body gets kicked around by big bumps and things, but body control is terrific and it’s mostly compliant.

And sure, while the overall limits of adhesion have come down, it still feels extremely capable on back roads, and even with the addition of the LSD it wants deliberate provocation or, probably better still, some wet weather, which remarkablyI didn’t find, to unsettle it.

If that sort of driving is your bag, though, you might want a more linear throttle response and more torque in the first place to mess around with the chassis balance. The fun of a 170, for me, comes with knowing that it doesn’t take much to get the car rolling and keep it fizzing along. I think the induction suck of the throttle bodies from the Super Seven 1600, or the more linear response of a bigger engine, or the looks of a set of 13in Minilite-style wheels, would draw me towards a different model, but even my not-favourite Seven is more fun than my favourite most other cars. 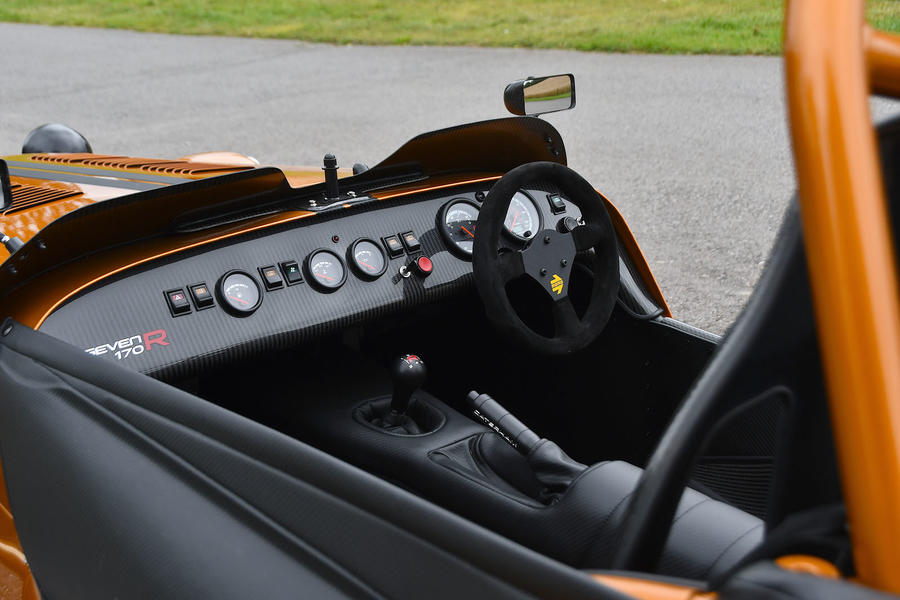 I can imagine the Japanese loving a highly specced R. I quite liked the more chilled vibe of the 170S, which, on standard suspension and with cushioned leather, has a more improved ride. It also has lighter, but still very responsive, steering, owing to a castor adjustment. That the driving position is higher means, I think, the gearshift is slightly easier.

With a windscreen, softer lope and normal seat belts, the S felt like a classic car straight out of the box. And on steel wheels, it would look like one. I’d still spec the LSD if I could, and somewhere in there is a great spec of entry-level Seven. Yet more hours on the configurator finding it. 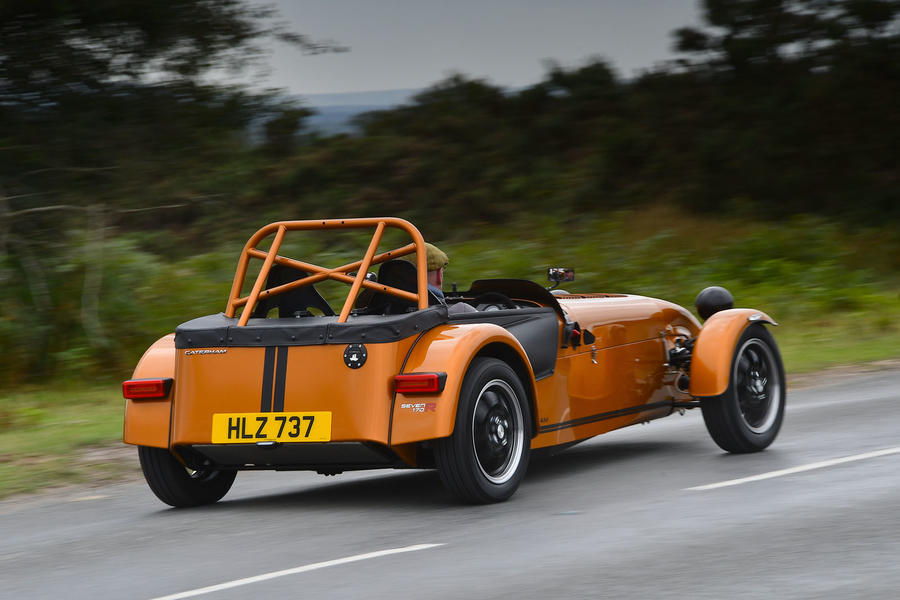 I've driven a few Caterhams and always felt too compromised for a car and not as good as a motorbike.  For £27K you can get an awesome bike, all the kit and several years worth of trackdays.  Still, we're all different.

They would be great for a junior race series for teens...