From £137,6958
The hugely capable high-end SUV is now available with a V8 engine. Does a smaller engine makes it an even more compelling luxury offering?
Open gallery
Close

Following the launch of W12 petrol and V8 diesel engines, this is the third and perhaps most convincing powerplant to feature in Bentley’s monumentally capable Bentayga SUV.

It’s a 4.0-litre, 90-degree V8 with its two twin-scroll turbochargers sitting within the vee of the cylinders. You’ll find it also in the Porsche Cayenne Turbo, and it’s destined to serve in the second-generation Continental GT, which arrives imminently.

This Bentley is predictably outgunned by its bigger brother, then, though it recovers some ground in the admittedly less exciting world of fuel efficiency claims. With the help of stop-start and cylinder deactivation technology that turns V8 into V4 when you’re stroking the throttle ever so gently, it manages a combined 24.8mpg to the W12’s 21.6mpg. The diesel puts both to shame, with 35.8mpg.

There’s the weight advantage too, of course. Except that’s not actually true in this case. The W12 boasts a design of such architectural economy that it’s only 25kg or so heavier than the V8, despite its extra four cylinders. As such, this junior Bentayga enjoys only a slight advantage on the scales, tipping them at 2388kg.

It means the V8 hits 60mph almost half a second after the W12, taking 4.4sec, and will bludgeon its way to 180mph – 12mph shy of you know what. But let’s not lose perspective here, because both sets of figures denote quite obscene pace for what are, first and foremost, high-rise exponents of ultimate luxury.

Crewe has also taken the opportunity to introduce some new options to the Bentayga. You can now get the car with carbon-ceramic brakes, for example, which at 440mm on the front axle are vast – 20mm greater than those found on a Bugatti Chiron, and the vastest of any production car, says Bentley. You can also have the calipers painted red, which isn’t allowed on the W12.

Spotting the difference between the two models on the road would be difficult were it not for the fact that most V8 Bentaygas will feature gloss black exterior trim instead of chrome – more sporty that way, they say. There’s also a new two-tone alloy wheel design in the size most W12 owners have opted for – the maximum 22in – and redesigned exhaust tips, which make two appear like four. 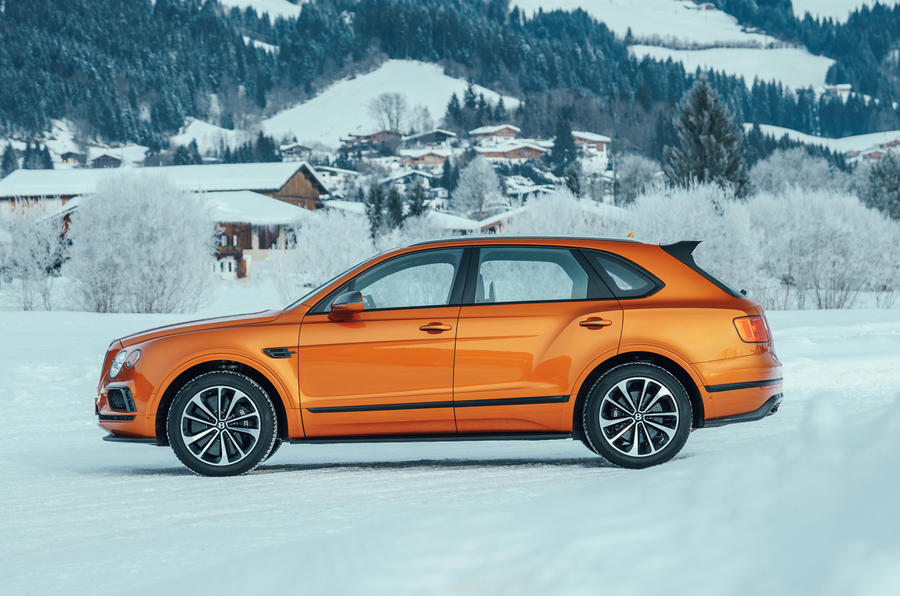 This twin-turbo V8 is throaty but civil, well-mannered but, deep down, pretty raucous. It’s versatile, too, and will fade into the background at a cruise but still fires the Bentayga along at just as alarming a rate as the W12 can, except on those rare occasions you’ve got your right foot resolutely pinned to the floor.

A redline set at 7000rpm means this is the highest-revving Bentley road car ever, and that’s reflected in the way the V8 goes about its business. The torque curve is a table-top job, with peak delivered between 1960rpm and 4500rpm, though maximum power arrives satsifying high up, at 6000rpm. This engine possesses a levity that’ll have you running it right up to that redline.

The delivery is magnificently wrinkle-free, too, because this eight-speed ZF transmission is, as we’re increasingly finding, almost impossible to find fault with. In fact, if there’s one criticism of this powertrain, it’s that despite the placement of the turbos, there’s just as much lag as with the W12. No, it’s not a yawning delay between action and reaction, but it’s just a little longer than is desirable in a more sporting model, which is how Bentley will market the V8 Bentayga.

Another small criticism. Bentley has spoken about developing the V8 exhaust note to achieve a characterful offbeat muscle car tone but, in truth, the noise this engine makes is a bit vanilla by the standards of the genre. It’s still considerably more distinctive than the W12, mind, which has a tendency to sound like a big-boned V6, and an Akrapovic-developed sports exhaust is in the works too. We’d expect that to deliver the goods aurally, though whether that is what a car like this really needs is another matter.

In dynamic terms, there’s no change to the adaptive air suspension set-up of the W12, with its four selectable ride heights and multiple modes ranging from Comfort to Sport via the generally very well sorted ‘Bentley’ setting. You also get the same active roll bars, which keep the body unerringly flat until you surpass cornering forces of 0.6G, at which point a little pitch is permitted as a reminder that you’re pushing on in a very substantial car.

Bentley says it has introduced more feel into the steering, but on the damp roads of the car’s Austrian launch – and with winter tyres to contend with – that wasn’t in evidence. Then again, expecting a car that does luxury almost without peer, can demonstrate commendable off-road dexterity and has the pace to see off bona fide sports cars to also possess a talkative chassis is perhaps asking the impossible. 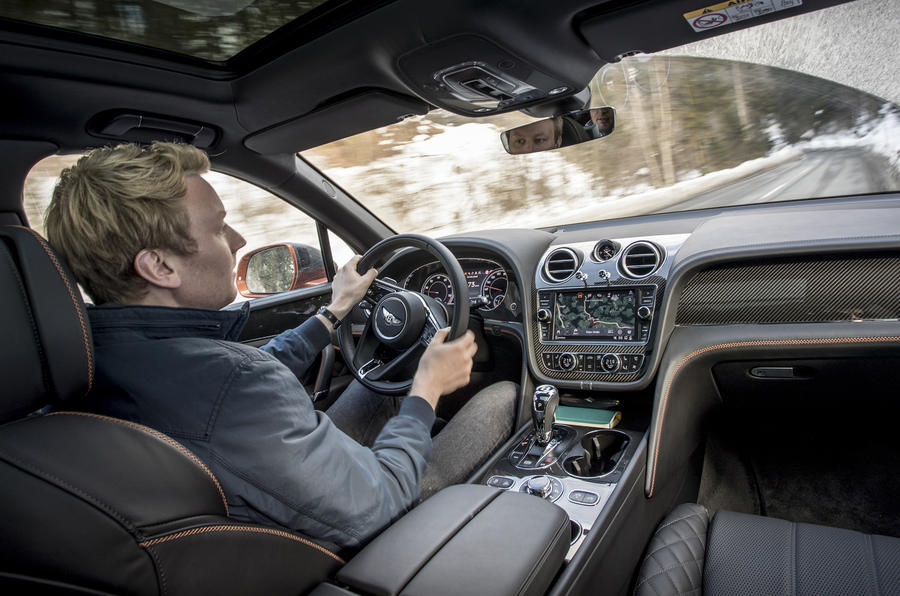 Rendering your flagship model redundant is not something many marketing departments will strive to achieve, but that is what Bentley has done here.

The W12 remains a compelling device and delivers a propulsive thump not only mighty by the standards of the class but by those of any class, excluding perhaps the more serious supercars.

This V8 won’t knock the breath out of you in quite the same way, but with it the Bentagya is a more complete car – and one that costs around £30,000 less. There’s greater character here with no forfeit in capability or flair. Don’t forget lower running costs, either.

On the subject of cost, a word of warning. Bentley reckons the average Bentayga customer will tick options boxes to the tune of £40,000. Given that a carbon exterior trim pack costs £15,000 and the Touring pack, which includes relatively basic amenities such as adaptive cruise control, a head-up display and lane-keeping assist, comes in at £6225, it’s easy to see why. Our test car was optioned to more than £215,000.

We’ve not mentioned the almost identically priced V8 diesel much, of course. It’s an astonishingly quiet, responsive engine, and an ideal option if you see the Bentayga less as a a sports car on stilts and more as a long-legged luxury express, which ultimately is what it is. 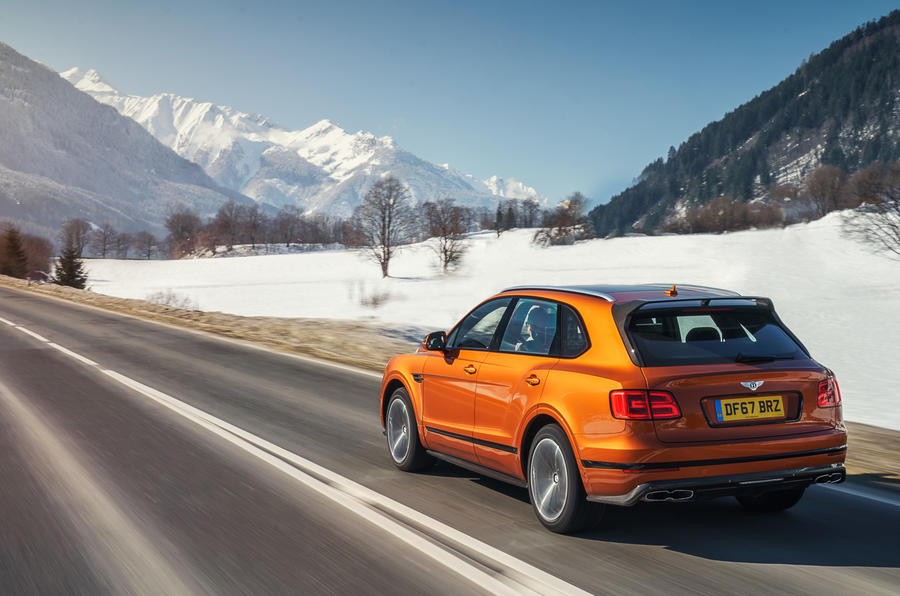 But I would rather have V12 powered dung any day.

The Bentayga isn't exactly a looker but the one in these pictures make it look absolutely vulgar. As if the paint job wasn't bad enough, the whole car looks utterly tacky and cheap with the black trim scattered all around the car. Bentley's are suppose to be tasteful and graceful, the Bentayga certainly isn't. Thank god the interior is wonderful though.

Please enough, stop using the word compelling all the time I have enough with work references. Remember when it was synergies ?  it means nothing other than people want to buy it.