Back in 1999, the bright folks over at what was then known as Quattro GmbH lit something of a small fire when they launched the original Audi S3. Just as the regular A3 on which that car was based is now widely viewed as the first posh family hatchback, the original S3 is arguably the car that properly kick-started an entirely different and slightly wilder automotive genre: the mega-hatch.

With four-wheel drive, a manual gearbox, 207bhp, a compact hatchback body and some immaculate motorsport heritage that its maker could hark back to, the original S3 stoked the embers that were first set burning by the likes of the Lancia Delta Integrale and a small handful of other niche, low-volume rally-bred road cars.

In the years following the S3’s launch, a raft of compact, high-performance hatchbacks began to emerge with ever-increasing levels of performance and capability.

The current Mercedes-AMG A45 S, with its 416bhp 2.0-litre four-pot, is the most extreme example of the breed we’ve had so far and it’s mad to think that a power output this high can be squeezed from an engine displacing so few cubic centimetres. The next RS3 will no doubt present Neckarsulm with a chance to give the car from Affalterbach a bloody nose, but until then, this new S3 sits pretty at the top of Audi’s family hatch range. Regardless, it would seem the small fire started by Audi more than 20 years ago has turned into a full-on inferno.

But anyway, much is familiar about this new fourth-generation car – even down to its lightly revised exterior styling, which looks rather fantastic beneath that searing Python Yellow paint. As ever, the S3 makes use of an electrohydraulic clutch-based quattro four-wheel drive system and power continues to come from a turbocharged four-cylinder petrol motor.

Unsurprisingly, it’s the 2.0-litre EA888 powerplant, which appears in everything from Audi the previous S3 to the Volkswagen T-Roc R to the Skoda Octavia vRS. As before, power has been dialled up to 306bhp to give it a bit of an edge over its Volkswagen Group cousins, while torque remains at a hefty 295lb ft. The option of a manual gearbox has long been done away with, so the only transmission available on this latest S3 is Audi’s seven-speed S tronic dual-clutch automatic – not that that’s a bad thing at all.

As with the latest versions of the Volkswagen Golf, Seat Leon and Skoda Octavia, the S3 is based on an evolved version of the VW Group’s MQB architecture. MacPherson struts comprise the front suspension and a multi-link arrangement is employed at the rear. Passive dampers are standard fare, and compared with the regular A3, it sits 15mm closer to the deck. Optional adaptive dampers are also available and were fitted to our test car. 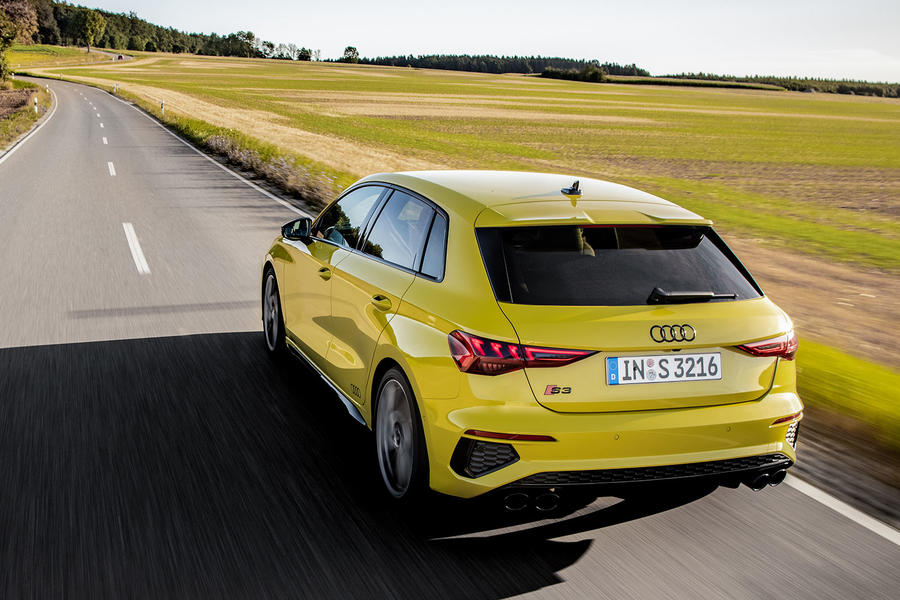 Hmm, that all sounds pretty familiar, doesn’t it? Based on the above, you’d be forgiven for wondering exactly what is new about this ‘new’ S3. Well, for starters, the quattro system has been very lightly revised and those adaptive dampers are now based around a more traditional hydraulic set-up rather than the Magnetic Ride system that was employed by the last S3.

The story goes that this change was made to make the S3 a bit easier to live with every day, as the previous Magnetic Ride set-up, which was honed in the likes of the Audi R8 supercar, was deemed a “bit too sporty” (Audi’s words, not mine) for what is essentially still a family hatch. That smacks of potential cost cutting to me but, hey, that’s the party line. Those dampers, along with the all-wheel drive and torque-vectoring-by-braking systems, are now governed by a central control unit as opposed to being left to their own devices like they were in the last S3. This, Audi says, makes for handling that is “even more sporty and nimble”. Excellent.

It all seems to work rather nicely, too, because the S3 remains a car that’s incredibly easy to drive incredibly quickly. And, yes, there is more than one way you could interpret that description, but they all seem to apply.

For starters, the engine has more than enough punch to make its claimed 4.8sec 0-62mph time feel entirely credible. Once you’ve worked through an initially brief bout of lag and the crank is spinning at 2500rpm, the S3 propels itself with serious urgency. Its mid-range performance is impressively strong and it keeps pulling tenaciously right up until you hit the redline and snatch the next cog in the swift-acting seven-speed gearbox. Its buzzy soundtrack still isn’t much to get excited about, but there’s nonetheless an appealing muscularity to its timbre.

In any case, it’s very easy to get up to speed, and once you’re there, the S3’s chassis makes maintaining that pace a cinch, too. With the dampers in their firmest setting, lateral and vertical body movements are kept smartly in check, and there’s abundant grip to be found as well.

The steering perhaps isn’t quite as quick in its responses just off centre as you might like, but it weights up in a really predictable way and gives you a surprisingly clear idea of how the outside tyres are loading up beneath you. It’s lacking a bit of grizzly edge to its dynamic character that fans of more engaging hot hatches might miss, but the level of confidence it instils in its driver right from the get-go will be a huge draw for many.

And when you want to calm everything down and fall into a more relaxed rate of progress? Well, it’s tricky to say definitively because the roads on our test route were freakishly smooth. But when you knock its dampers all the way back to the Comfort setting, the car stops sucking in its gut so tightly and, as a result, rides undulations with a degree more sponginess and a smidge less control. As for bump absorption, I deliberately drove over the few ruts I could find and the car coped well enough. There certainly wasn’t any uncouth crashing or shunting to speak of. Hopefully, it’ll perform the same in the UK but we’ll need to try it on home Tarmac before we can be sure.

But while we have yet to see how the Audi performs on UK roads in comparison to its two main rivals, it’s worth noting that its cabin isn’t quite as strong as those of the others. The Mercedes packs a good deal more superficial wow factor and the BMW has a sense of solidity and sturdiness about its construction that’s disappointingly absent from the S3. That’s a shame, because it’s one area where the old car really towered above the rest. Nevertheless, passenger space is good – although the quattro all-wheel drive system does mean boot space shrinks to 325 litres. 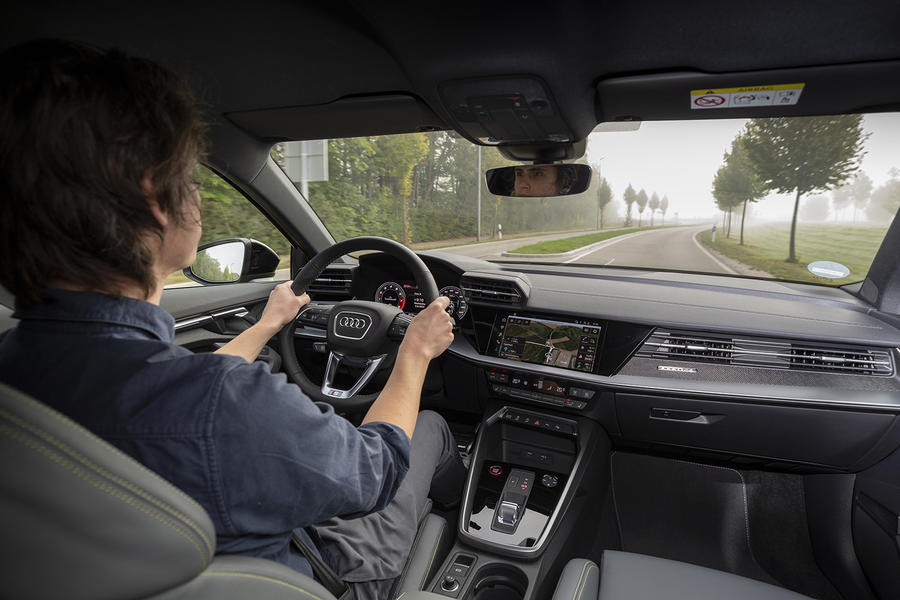 Still, the S3 remains really quite likeable for the almost blasé manner in which it makes such short work of what you’d normally consider to be fairly hard driving. That said, it does leave you wondering just where Audi Sport will go with the next RS3.

Aside from that mad-dog five-cylinder engine, some more material plushness about the cabin and a fraction more grit about its overall dynamic character wouldn’t go amiss. 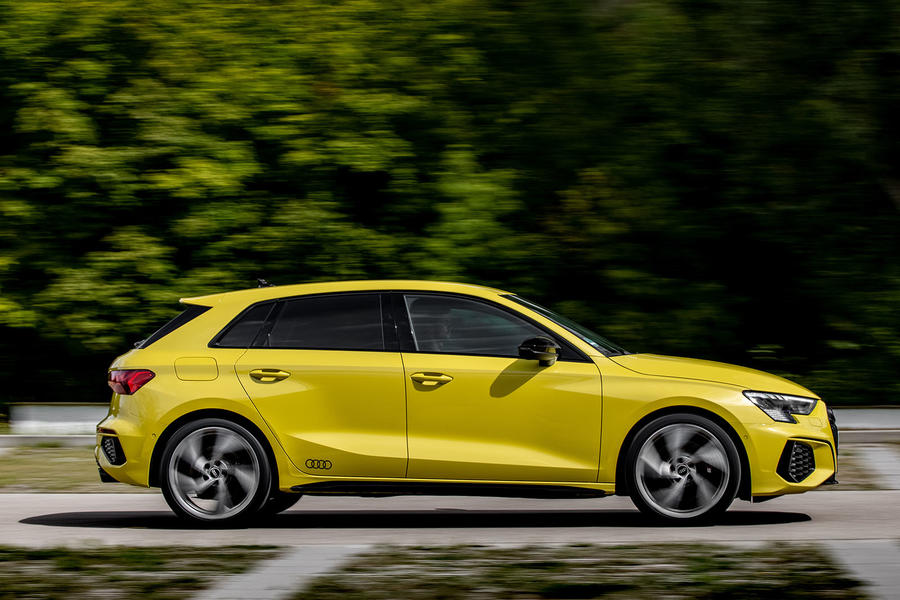 Good to see that they intend to introduce a more modest pair of petrol offerings to fill in the gap, simply because it might mean SE trim rather than S-Line and you can have a real-world quick car without that over the top front end. The S-Line bumper used to be a worthy upgrade, but now the Sx models look so overwrought, it's made S-Line trim worth avoiding.

What Audi should consider is something in the Mk.IV Golf V5/V6 mould with a quick engine, plush interior, but non-sporty trim. Sport this, S-Line that is fine sometimes, but subtle luxury performance used to be Audi's forte.

Isn't it all a bit meh? The 3 German marques all playing baby step catch-up with each other, and Audi cutting back on cabin quality - which tbh was its USP. I've always been a bit of an Audi fan boy but.....feel totaly apathetic by all this with the 'new' S3 and competitors. I do wish Honda would wind down the bling/boy racer look of the Civic Type R - I'd be proper tempted if they did.
fleabane 15 September 2020

but swiftly heading towards irrelevence. In a few years time there'll be a racing series a Goodwood and meet ups at Brooklands, and that will be it.