From £30,3658
Audi’s once-niche S3 Saloon now has four-door competitors from BMW and Mercedes. Is it still the consummate all-rounder?
Open gallery
Close

Audi has a veritable smorgasbord of performance-tuned products, many of which are faster, cleverer and quite a lot more expensive than the (relatively speaking) humble S3.

But quite often in a range there is a Goldilocks car; one that combines enough of the qualities of its more well-endowed siblings with the perfect blend of size, everyday usability and, crucially, price. The S3 could well qualify for this accolade, offering pretty much all of the performance you’d realistically need in the UK while not sacrificing the high overall competence of the standard A3.

The S3 also has some heritage - albeit limited to the past two decades or so. Although it’s by no means the genesis of four-wheel drive or even four-wheel-drive hot hatchbacks, the first-gen S3 of 1999 is credited with democratising the all-paw everyday fast hatch. Before that arrived, 4WD was largely the preserve of rare or uncompromising rally homologation specials - your Delta Integrales, Escort Cosworths and the like.

But that was then and this is now, and the S3 no longer has the game to itself. It’s also available as a saloon, which we have here. So since rivals have long caught up, is it still the best of the breed?

Well, let’s get it out up front: if you didn’t like the old S3, you probably won’t be too fussed by this one. The technical recipe is familiar: the 2.0-litre EA888 turbo petrol motor remains with some minor emissions-related updates and a modest power boost - up to 306bhp. It’s mated solely to a seven-speed dual-clutch transmission.

Like the base 2020 A3, the S3’s platform is an evolved version of the ubiquitous Volkswagen Group MQB underpinnings, with a 15mm-lower ride height than the standard model and a familiar MacPherson strut front, multi-link rear set-up. The Haldex-style clutch-based four-wheel drive system remains, with torque vectoring carried out via braking inputs. 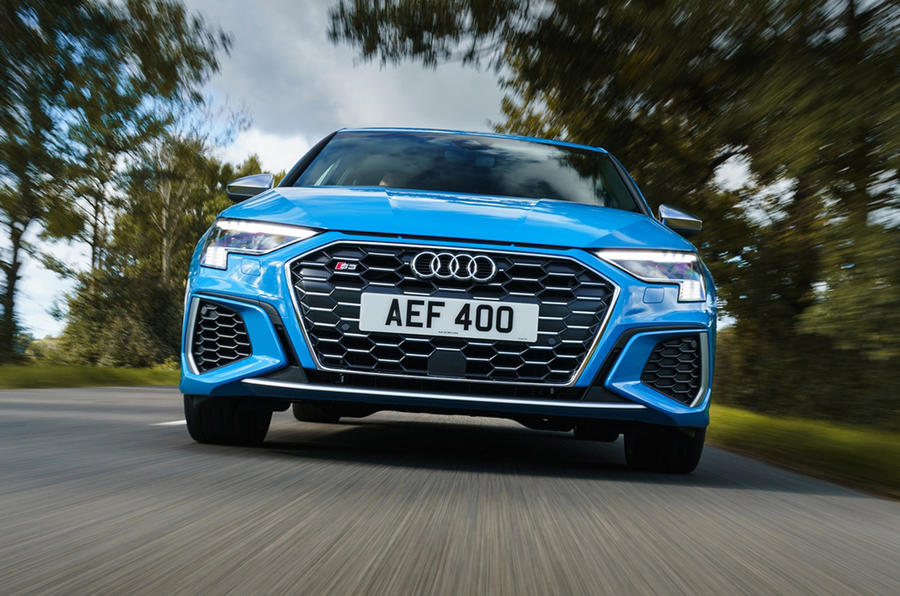 It’s clear from reeling off those facts that the development priority here was in software and fine-tuning rather than big changes in hardware. But is that so surprising, given the vast technological abilities of even modest modern metal these days?

It follows, then, that this S3 offers substantially more computing power, connected features and advanced driver assist functions than the model it replaces. But whereas its VW Group siblings fully embrace the digital revolution with a largely button-free, minimalist cabin, Audi has tread a slightly more traditional path by retaining some physical switchgear.

This, in our view, is a correct decision. The screen is bright, clear and responsive (and no longer rises electrically from the dashboard in a way that some may consider dated) but functions that are operated more simply on the move by a button - such as the climate controls - are. General quality is respectable and the design is attractive enough, but we reckon the old S3’s cabin was more outstanding on both fronts. Maybe rivals have just caught up, or maybe the VW Group’s extensive post-Dieselgate cost-cutting regime is biting a bit.

Regardless, it’s a roomy, comfortable and refined place to while away the hours at the wheel, and for three passengers. In fact, this remains the S3’s defining trait.

Our test route began with some town and motorway work, where - even without the optional adaptive dampers, which weren't fitted to our car - the S3 behaves for all intents and purposes like an S line A3. Sure, there’s a touch more vertical movement and a fraction more low-speed crashiness (mainly suspension noise rather than physical feel) to remind you you’re in a performance model, but by and large, this is exceptionally livable for a 300bhp-plus hatch-based saloon.

And that's even on the larger 19in wheel option: we can only imagine that on 18s, this is broadly as comfortable as a standard A3. Which is a very good thing. Perhaps the smaller wheel would also reduce road noise, which is noticeable rather than intrusive.

But Audi was hardly likely to abandon the S3’s everyday civility in favour of aggressive spring and damper rates. Mainly because the hotter RS3 exists, but also because the S3’s formidable popularity is acutely linked to its usability.

Does that mean it's lukewarm when you finally free yourself from average speed cameras and up the ante? Not really. Granted, you’d be smiling more at the wheel of more playful and rearwardly mobile front-driven alternatives with manual gearboxes, but you have to respect the extraordinary dynamic range this car offers.

The first surprise is the steering. It was a bit of a weak point on the old model, but Audi has instilled a little more positivity and even a modest amount of feedback into what was previously a detached and aloof rack. It turns in sharply, allowing you to place the car exactly where you want to before confidently getting on the power on corner exit. Back off the power on entry and, unlike fast Audis of old, it'll even pivot the rear around in a controlled manner.

Body control is fine and would likely be very good with the adaptive set-up, but that there’s some breathability in the suspension means it never gets knocked off line and stability is strong. Grip is unsurprisingly tenacious, and the brakes, while not outstanding, offer more than enough confidence and raw power without being remotely grabby. As before, it’s impressively easy to pile on the speed and keep it in check, but now you can have a modicum of fun doing so.

Granted, the powertrain itself won’t win awards for character or fizz. Even when the active sound generation was in its loudest mode, it's quietly muscular rather than anti-social, and the upshift exhaust pops are subtle from inside. Although it takes on a gravelly, hard-edged tone once spun higher, the act is a bit marred by a strange omnipresent high-pitched whine when you lift off at higher revs.

Truly aurally stimulating it isn’t, but mightily effective it is. Once over a brief bout of lag and spinning at around 2500rpm, thrust is meaty and satisfying in the mid-range, but happily the shove builds rather than diminishes as you approach the redline. The gearbox is pretty much unflappable, slurring gears smoothly when you’re pottering about and firing through ratios when you’re not. 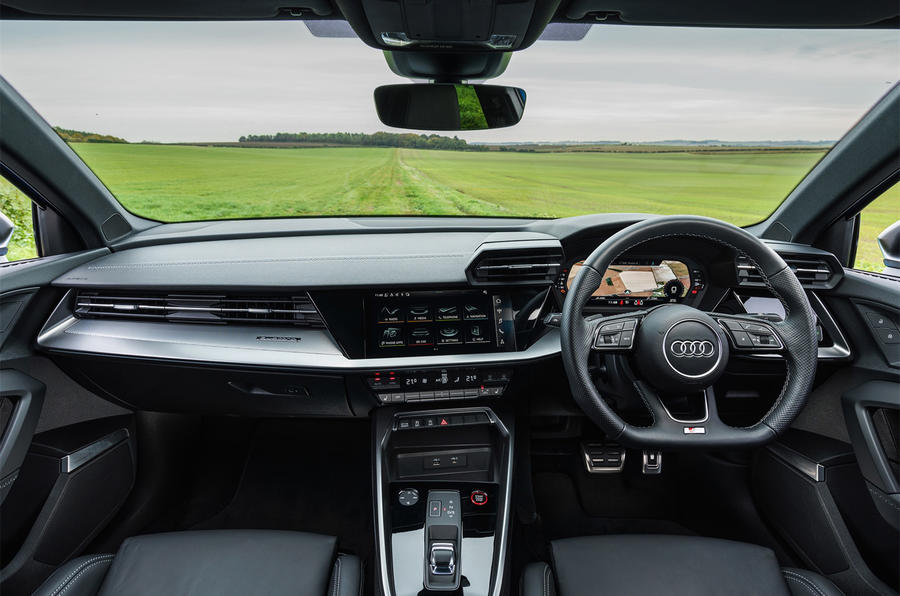 This very much depends on your usage pattern and criteria. The S3 Saloon stacks up admirably against its German challengers. But if out-and-out thrills and the odd weekend track day are the overriding priority, there remain far more satisfying hatchback alternatives, and most of them are front-wheel drive.

We suspect there’s even greater dynamic range to be had with the adaptive dampers and wish there was a more engaging soundtrack. But if you’re one of (given the S3’s sales success) many who want one car that can take the kids to school without embarrassing them, crush long distances with a relaxing gait and offer all-weather, all-scenario potency, the Audi is one of the best bets. 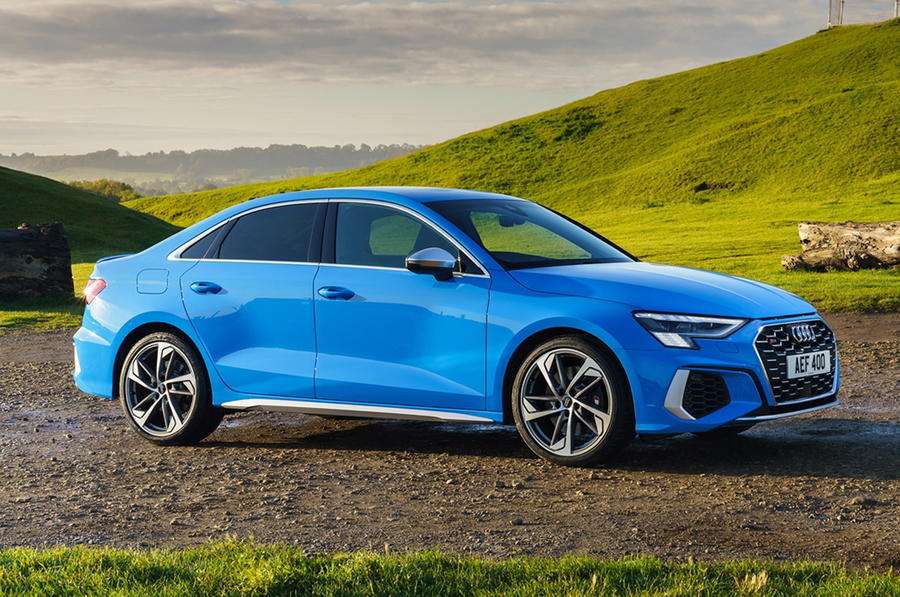 Soon to be seen being ragged

Soon to be seen being ragged around your local town centre at obscene speeds by weed toting wankers.
Curly55 21 October 2020

How have car prices for smallish hatchbacks and salooons got so out of hand with reality ??

How have car prices for smallish hatchbacks and salooons got so out of hand with reality ??/quote]

It's not that small, and it's the second fastest A3 they do. The S3 saloon starts at about £25k.

How to ruin one of the best

How to ruin one of the best looking Audi, both outside and in ...

This A3 is now as visually unappealing as the 3 series.

With the Lexus IS gone, the only possible compact exec choice - visually speaking - is the XE, despite its still awful interior.