From £46,3508
Faster, facelifted version of the already feverishly quick Audi RS3 Sportback continues to impress us with its sheer breadth of ability
Open gallery
Close

Sister car to the mechanically identical RS3 Saloon in an extended line-up of models from Audi Sport, the much anticipated updated RS3 superhatch has received a number of key mid-life upgrades that are claimed to both enhance its dynamic prowess and, more crucially, make it more entertaining to drive.

The big news with the newly reworked four-wheel-drive Mercedes-AMG A45 4Matic rival revolves around its turbocharged of the 2.5-litre five-cylinder direct-injection petrol engine, which has been thoroughly re-engineered, giving it more power and reducing its weight by 26kg, therefore improving the RS3's power-to-weight ratio and weight distribution.

Its the same transversely-mounted engine applied in the second-generation TT RS in 2016, so it's not entirely new. Changes cited by Audi Sport development boss, Stephen Riel, include the adoption of an aluminium crankcase in place of the old iron one. Plus, a new dual injection process and Audi’s patented valve-lift system in a combination claimed to increase combustion efficiency as well as a revised exhaust system with a larger volume muffler and adjustable flaps for an even more determined exhaust note.

With a larger-volume turbocharger providing a relatively low 1.35bar of boost pressure, the new five-cylinder kicks out an extra 32bhp at 394bhp between 5850 and 7000rpm. Torque is also up, but only marginally, rising from a previous 343 to 354lb ft on a 225bhp wider range of revs between 1700 and 5850rpm.

The RS3's increased reserves are channelled through an updated version of the standard S tronic seven-speed automatic transmission. This receives changes to its drive element at the propeller shaft in a move claimed to reduce its weight by 2.0kg over the earlier version of the dual-clutch unit. Offering the choice of either manual or automatic modes, it comes with steering wheel-mounted shift paddles and a launch control function.

The RS3's electro-hydraulic multi-plate-clutch quattro four-wheel drive system has also been revised with new software mapping. It is now capable of delivering between 50 and 100% of drive to the rear wheels.

Underpinning the new RS3 Sportback is a reworked version of its predecessor’s suspension, with MacPherson struts up front and an independent four-link arrangement at the rear. It is lowered by 25mm over the lesser A3 Sportback and can be optioned with an RS Sport Suspension Plus package that brings magnetically-operated variable damping.

You’ll never confuse the latest RS3 Sportback for the A3 Sportback. Among its more distinctive styling touches are a front bumper with larger air ducts, a high-gloss black grille with a honeycomb insert, flared front wheel arches, black mirror housings and wider sills. At the rear, it has a larger spoiler and a new bumper with an integrated diffuser and oval tailpipes. 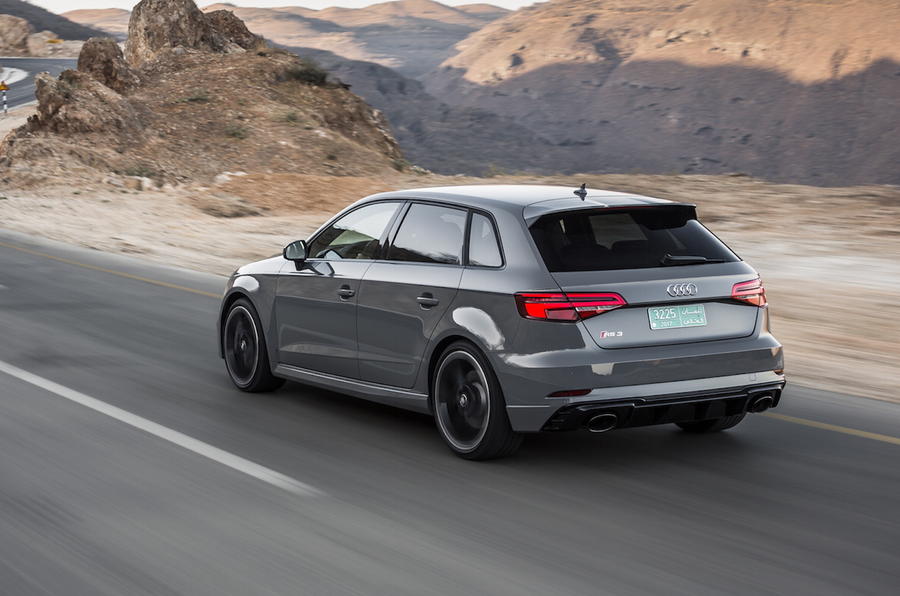 The positive impressions begin as soon as you step inside. Although a little dark, the RS3 Sportback's interior is both stylish and of a high perceived quality. In fact, it wouldn’t be out of place in a car costing twice as much. Although much the same as before, it continues to feel special - all the traditional RS touches are present such as a perfectly proportioned flat bottom multi-function steering wheel, supportive sports seats with embossed logos, a model-unique gearknob and stainless steel pedals.

Buyers can now also opt for Audi’s Virtual Cockpit, a 12.3in high-definition display in place of standard analogue instrument dials. As on the latest TT RS, this receives unique RS graphics among a series of different themes available to the driver via the press of a button on the steering wheel. Another option well worth considering is the electrically adjustable shell-style sports seats. With integrated headrests and prominent bolsters, they not only look the part but also provide outstanding support, particularly at shoulder level.

When you hit the engine starter button, positioned down on the centre console, the RS3 Sportback fires with great intensity before settling down to a lumpy idle. Moving off into traffic, the wonderful idiosyncratic qualities of its engine, which continues to run a 1, 2, 4, 5, 3 cylinder firing order, remains very much part of its appeal.

If anything, it sounds even more determined than before, especially in Dynamic mode, where the flaps in the exhaust are opened to increase volume. And with more power arriving earlier, there is an improvement in response and overall tractability at low revs. The new engine also pulls harder through the middle range and, when hauling along on the open road, feels happier percolating at high revs than the old iron block unit ever did. 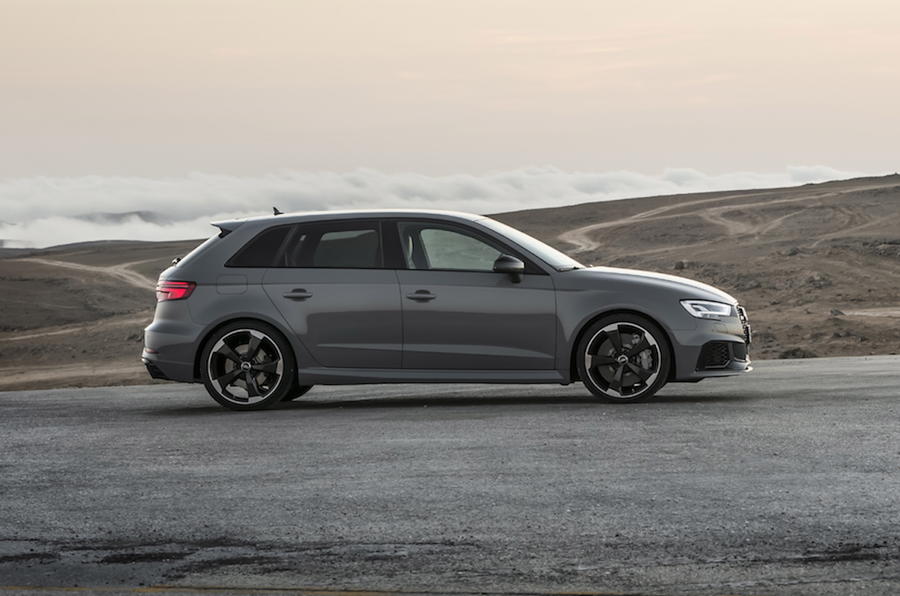 Suffice to say the RS3 Sportback is quick. With a power-to-weight ratio increase of 23bhp per tonne, 0-62mph takes 4.1sec, which is 0.2sec faster than the old RS3 Sportback and 0.1sec less than the A45 4Matic. The RS3's top speed is nominally limited to 155mph, but can be raised to 174mph.

While the engine remains the undisputed highlight, the acceleration generated both off-the-line and through the gears in Sport mode can also be attributed to the sheer efficiency and responsive nature of the revised dual clutch gearbox and four-wheel drive system. Together they provide the car with truly heroic performance in the right conditions.

It’s not all fire and brimstone, though. With a terrifically flat torque curve, the RS3 also delivers effortless part throttle cruising qualities in Comfort mode.

With the reworked four-wheel drive system competently doling out drive to each end, there is a predictable abundance of grip on winding roads. It took a huge amount of commitment and very high cornering speeds to unseat the optional 255/30 profile Pirelli P-Zero front tyres of our test car.

However, the RS3 Sportback is now more alert and reactive. With the new engine placing a little less weight over the front end and tweaks to the camber of the front wheels increasing the contact area of the tyres, it now turns in with improved enthusiasm and resists understeer much better, backing up Audi's claims that this facelifted model is more entertaining to drive than its predecessor. 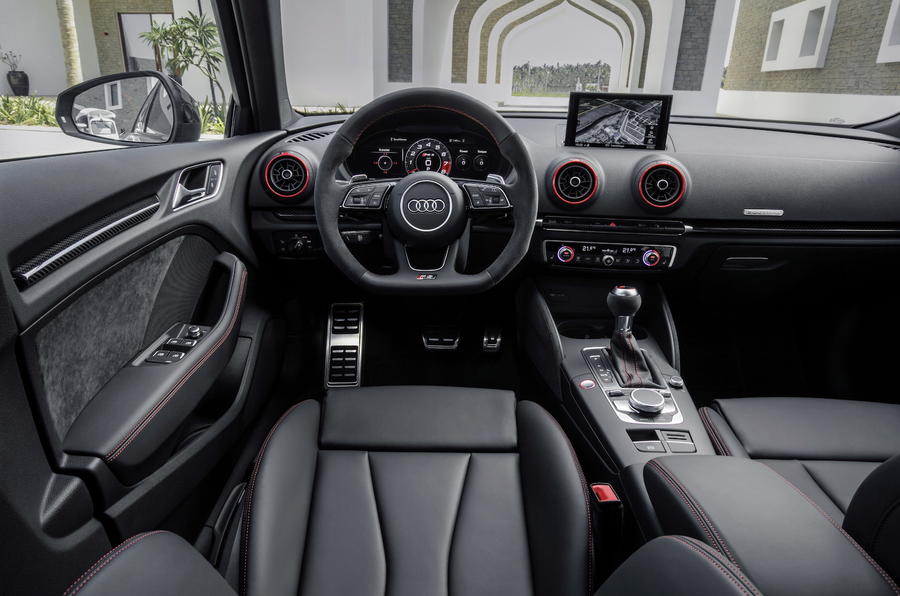 The RS3 Sportback now also feels more fluid and dependable when you're on the limit. However, it has lost none of its outright grip, nor its proficiency to place its abundant power to the road at the judicious punch of the throttle early in the exit of corners. Push it hard, and it rises to the challenge with improved balance and impressive body control.

The overall lightness and muted responses delivered by the steering around town are also improved at higher speeds out of the open road, where it becomes quite weighty and a little more communicative when you’re really hauling along through a series of constant radius corners like those we found on a smooth surfaced road winding up the mountains of Dhofar, Oman.

The heavily dusted roads we encountered also revealed another positive side to the dynamic ability of the new RS3 Sportback. With the electronic stability control system switched to Sport mode, you can persuade it to kick its tail out by lifting off early on the entry to corners. It will even encourage power oversteer when you get back on the power early enough.

While the faster reactions brought on by a new software and the ability of the four-wheel drive system to send up to 100 percent of drive to the rear wheels can be credited with much of this newfound adjustability, it is the optional tyre package that also play a central role here.

It is fun, then. But there is a rider: the ride. On standard suspension, it's typically firm and offers little in the way of comfort, wants for compliance and often becomes quite harsh. We will have to wait until we drive it on more familiar roads closer to home before making a definitive call, but our experience in Oman suggests you’re going to be better off with the optional suspension, which adopts magnetically operated variable dampers.

The RS3 Sportback also suffers from excessive road noise when the surface is not absolutely smooth, especially at the rear end, leaving us in doubt about its qualities as a long-distance cruiser. 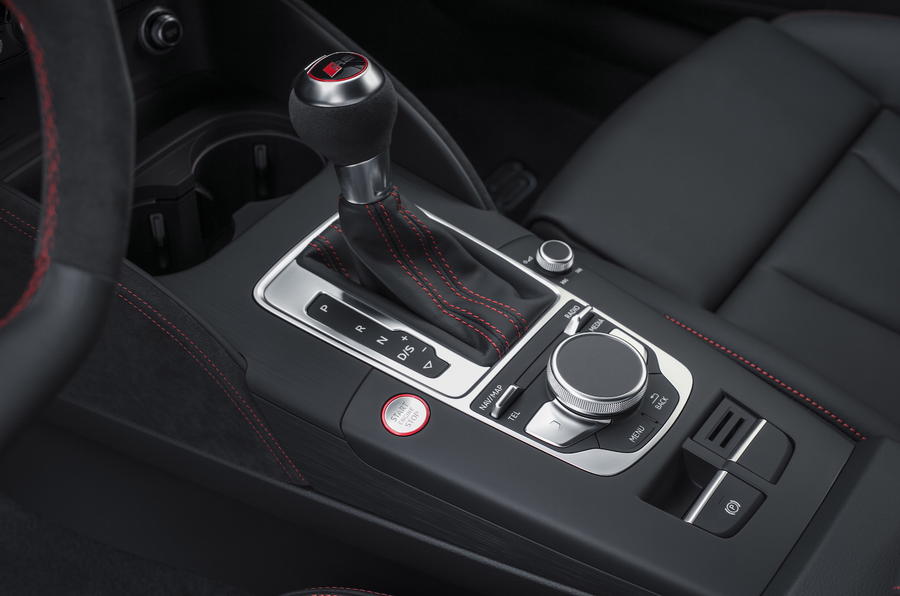 The facelifted RS3 Sportback is an improved car with an astonishing breath of ability. Around town, at moderate speeds in Comfort mode, it is endearingly docile, if a little firm-riding. But it is at higher speeds in Dynamic mode that it really reveals its true potential, delivering a scintillating turn of speed and the sort of poise that marks it out as one of the world’s most capable high-performance hatchbacks.

Its new engine, in combination with an improved gearbox and quattro four-wheel drive, brings an added dimension to its predecessor's already hearty performance. On top of this, it's now more visually distinguished from the A3 Sportback, and its superbly crafted interior puts all rivals to shame in terms of appearance and material quality.

As we’ve come to expect from Audi, the RS3 Sportback is impeccably engineered, but with an expected price around £41,000, you’ll certainly pay for the privilege.

Audi has also introduced a new RS3 Saloon, but if overall versatility and rear seat accommodation are among your priorities, the Sportback is the clear choice between the two.

LOL! So when it first came

LOL! So when it first came out the reviews were fairly decent but it wasn't all that on the handling side - for example, a Golf R was coming up as more enjoyable to drive. But now, it's apparently a hoot to drive in the twisties. I don't doubt the engine is strong, but suddenly it's a blast whichever road you are on? I don't think so somehow. #biasedautocarreviews
madmac 20 March 2017

Quality, practicality, compact size for winding Scottish roads, the warble of a 5 pot.0-60 in the 3's [The 996 GT2 was celebrated not so long ago for being one of the first cars to break the 4 second barrier]. Its a bargain at the price.I would also have the CCB at the front for a special touch.It would leave an M4 , Quadrifoglio,and a C63S in the ditch on a snowy Highland or Southern Upland road.
View all comments (9)