From £46,3507
Audi Sport's firebrand hatchback gets an even more brilliant engine, but still falls short of the dynamic finesse and driver involvement necessary to make it a true performance great
Open gallery
Close

The new 395bhp Audi RS3 makes light of the way we tend to think about new cars.

In five-door Sportback trim, as tested here, it is nothing short of the fastest-accelerating and most powerful hot hatchback you can currently buy and one of only two left on sale still to offer the mechanical richness of a multi-cylinder petrol engine. In four-door saloon form, on the other hand, it’s a car with a much less clear selling point: a cheaper, smaller alternative to a Jaguar XE S or a Mercedes-AMG C43, perhaps.

Those positions would seem to have an awful lot of notional clear air between them; you wouldn’t imagine people to struggle to remember which version they were interested in. But try telling that to the guy in the Audi showroom who has learned there are very few technical differences between the two RS3 siblings beyond what his eyes can see and who is on this third eeny-meeny-miny-moe decision-making attempt. Which one should he have? “Well, which one do you fancy, sir?” It really needn’t be any more complicated than that.

The RS3 saloon has a wider rear axle track than the hatch, as well as a slightly lower roofline and a lower roll axis – but not by much. The five-door version is the lighter of the two, but only by 5kg. Plumping for the Sportback means you save £950 – but that’s on a car you’ll likely be spending five times as much on options with. And as we’re about to explain, the influence of the individual options you choose will be much greater than the influence of the car’s bodystyle on its driving experience. 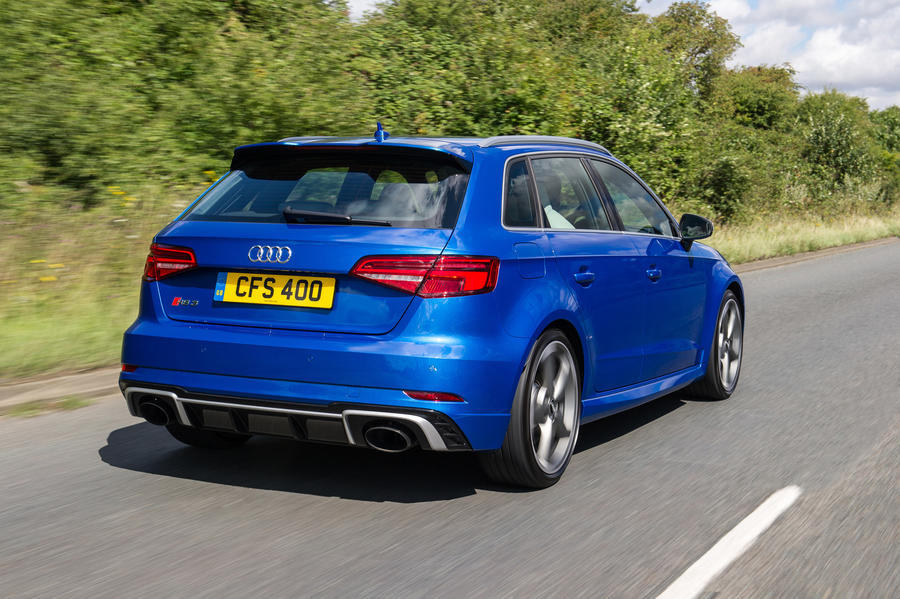 Our first taste of the RS3 happened only last week, in a saloon fitted with Audi’s optional mixed-width 19in alloy wheels (wider up front than at the back) and adaptively damped RS Sport suspension. Our first go in a Sportback comes in a car with identically sized rims but without the optional ‘magnetic ride’ dampers – and, as it turns out, that’s £995 worth of suspension on which you shouldn’t skimp.

The RS3 is a car whose every facet seems to have had hyper-responsive vigour injected into it, with a comparable effect as the one documented in that scene from Pulp Fiction in which Uma Thurman is left with a syringe poking out of her ribcage.

The car’s brake pedal is so initially powerful that it’s often grabby and embarrassingly abrupt to use. Its ‘progressive’ steering is very direct immediately off-centre, but is also light enough that you don’t feel any of the build-up of weight that would usually tell you the front wheels are loading up. And the car’s ride, in standard passively damped form, is at once nagglingly firm over less-than-perfect surfaces and also so aggressively damped under compression as to feel a bit brittle over both larger, long-wave intrusions and smaller, sharper ones.

You’d need to be on the autobahn to legally take the RS3 to a speed at which its suspension would mellow out and begin to feel more supple and openly conversant with the road surface. At UK motorway speeds and on well-surfaced A-roads, the car is more at home than it is on many B-roads; and on the latter, it can fidget and rebound at well below the national speed limit without much regard for your comfort levels and to the obvious detriment of general stability. A Mercedes-AMG A45 combines body control with bump compliance much more effectively.

What the Audi gains from that kind of suspension tune is handling that’s very direct and apparently very agile in most road driving, up to the limit of grip. The car’s over-assisted steering system feels light and uncommunicative even with ‘dynamic’ mode selected and also fails to telegraph the point at which the steered axle begins to bite into a corner. But that certainly happens smartly as you begin to turn the wheel – and grip is slightly better balanced here than it was in the last RS3. You’re unlikely to run up against much understeer until you leave the public road and exit a pitlane; and even then, you’ll have to work pretty hard under wide mid-corner throttle openings to find it.

Overall, the RS3’s remote and uncompromising chassis still isn’t the greatest advert for the car. That will, however, figure as highly for you as Parisian patisseries likely did for Neymar while he was weighing up his recent decision once you experience Audi’s main attraction: that 2.5-litre, 395bhp engine. It sounds every bit as good as you hope it will. It’s partnered to seven-speed twin-clutch gearbox that, for the most part, transmits its lustrous violence with accomplished ease. And, yup, it makes the RS3 Sportback even quicker than Audi claims it is.

In 2015, we put the last RS3 at 4.1sec to 60mph and 10.3sec to 100mph – and it would be the fastest-accelerating car of its type today. On a surface that isn’t the one we habitually use for benchmark figures but measured in two directions all the same, the new one took just 3.9sec to hit 60mph from rest and 9.7sec from standing to 100mph.

Make no doubt about it, then: this car propels the hot hatchback straight into big-hitting sports car territory on out-and-out acceleration. On the road and left in either of the transmission’s D or S modes, the powertrain explodes though the lower intermediate gears so quickly that you barely have time to enjoy the sound of the engine under load.

Select a higher gear in manual mode and you can drink in the warbling magnificence in greater detail, though. But best keep an eye on the digital speedometer that you get as part of the car’s Virtual Cockpit standard instrument pack, because this engine isn’t at all peaky and is well capable of very big speeds on smooth roads without ever troubling you for a downshift. 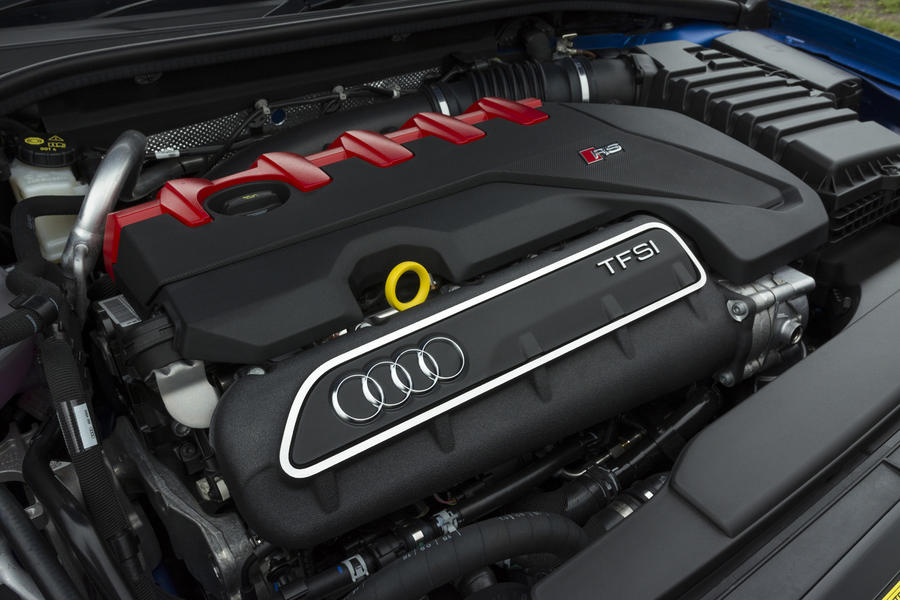 That decision may depend on whether you prefer a longer, shallower boot or a shorter, more upright one – but we hope not. For the record, the Sportback has the larger of the two in outright terms, although if you’re making a decision on a car like this on such a rational basis, we’d suggest looking into something your local wellbeing professional would call mindfulness training.

The Audi RS3 is a performance car with a very special engine, but one that still wants the handling sophistication and driver involvement that its engine so richly deserves. That’s as true of the saloon as it is of this hatchback version – and, ultimately, we’d take a Mercedes-AMG A45, BMW M2 or Volkswagen Golf R over either.

At least we’ve made plain how much an improvement you can make to this car’s ride by having adaptive damping, though – an option that, neatly enough, could almost be entirely funded by the decision to take a Sportback instead of a Saloon. 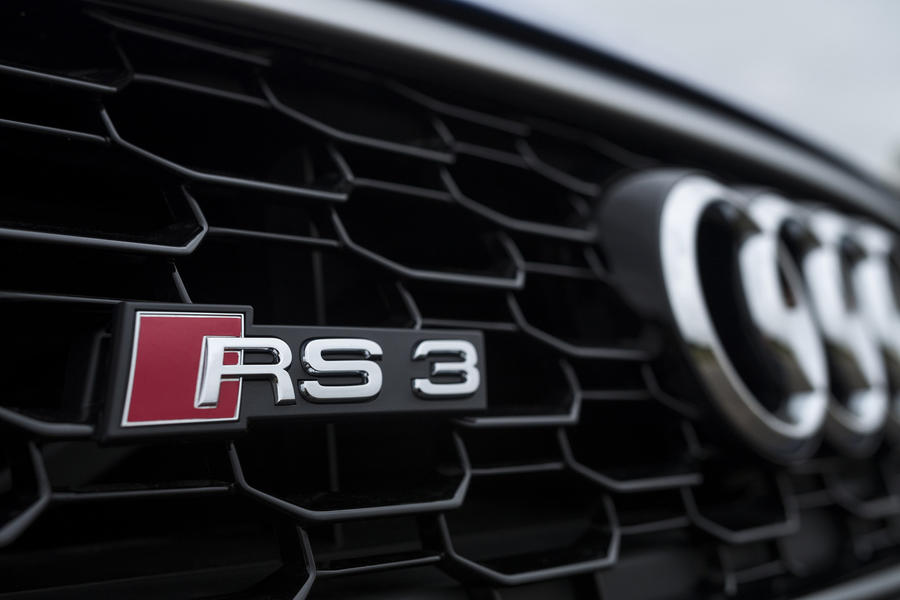 Give it the most power in the market and deliver supercar rivalling performance. Kill it with oversteer because most owners wont have a skill to keep that amount of power in check.. People can buy what they want, of course, but performance like this on the road is surely a waste

Crap as per usual

Same crap as all the other crap audis. These are cars for idiots it has to be said, never get a good write up 3.5 stars for there best effort and these bozos want you to pay £995 for the car to have a decent ride on a car they have the cheek to lable as being some sort of "RS" the words "rs" do appear accompanied by 2 more letters.

Every other review has

Every other review has praised the car's handling and ride on the standard suspension. I think this car is better than its rivals.
View all comments (6)