From £120,1857
Overhauled engine makes the greatest thing about the R8 even greater, even if the restrained looks and handling poise of the original are becoming an ever-more-distant memory
Open gallery
Close

The latest facelifted version of the Audi R8, just arrived in the UK. Supercar, super-sports car, fast Audi godfather, 4WD mid-engined misfit – call it what you will; having been unveiled in this latest form at the 2018 Geneva motor show, it has just been in receipt of a dose of extra power, a retuned power steering system, a retuned stability control system and only a very few hardware tweaks besides.

Looks... well, angrier, doesn’t it? Audi’s exterior design tweaks are probably the most significant changes that have been wrought on the car, and among them are a lower, wider, meaner-looking single-frame radiator grille, a more jutting front splitter and a reprofiled bonnet.

The car’s rear diffuser has been pumped up in volume, too, and its exhaust redesigned as what looks, at first glance, like a twin-pipe system of quite monstrous proportions. And then you realise, inevitably, that the real pipes are hidden away behind those oversized round bits of plastic trim. An odd tactic on a car with a glass engine cover, and whose chassis legs and induction system can clearly be seen from around the rear end at close quarters if you care to gaze through the right piece of mesh grille. Why put all that on display and then fake the tailpipes? It’s a mystery to me.

The 5.2-litre atmospheric V10 that the R8 shares with the Lamborghini Huracán now makes more power and torque than before. The entry-level R8 is up from 532- to a peak 562bhp, while the upper-level version (dubbed the R8 V10 Plus before and the ‘Performance’ now, in line with the naming convention of the rest of Audi Sport’s RS range) is up to 612bhp from 602. The R8 Performance gets the bigger gain of the two derivates on torque, delivered as a result of new titanium valvetrain componentry and some software retuning. Both R8s also get an emissions-reducing gas particulate trap as part of the engine update.

Matt Prior had a track-only drive in the R8 in Spain late last year, in upper-level ‘Performance’ guise. Now we try the lesser-powered version with right-hand drive. 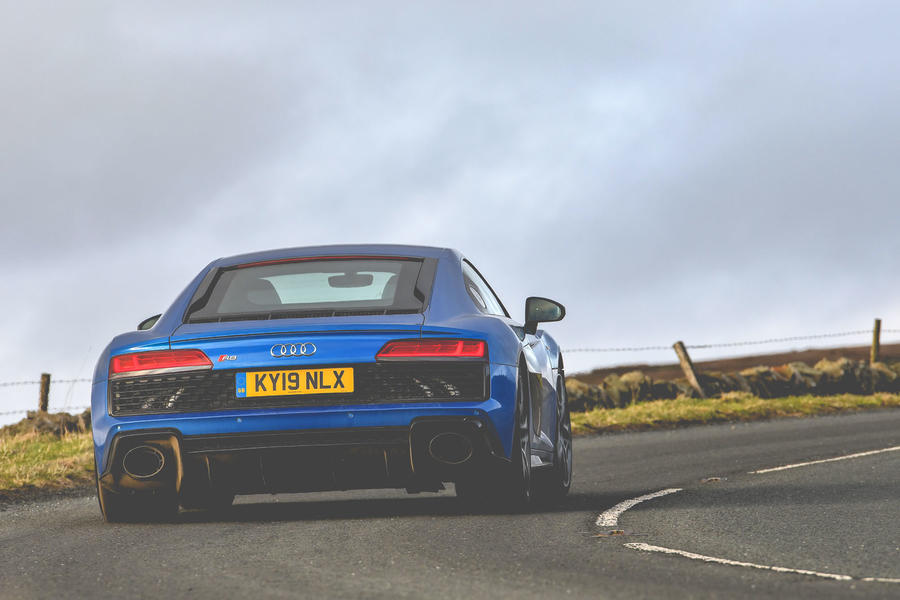 Less conservative and understated visually, without a doubt. Not much like a 1980s 'Ur' Quattro, mind you – which is the car that a decent chunk of the styling makeover is intended to reference. But then an A1 doesn’t look much like a Quattro either, despite Ingolstadt’s best efforts; and, by the way, neither should it.

You’d be more likely to notice the R8 now, but not necessarily for the right reasons, I’d say; more likely, as the typical supercar owner, to like what you see – but less likely, perhaps, as a fan of the original, technically-impactful-yet-restrained R8. As it happens, and as you’ve probably gathered, I’m not such a fan of the looks.

The interior of the car’s almost unaltered. By supercar standards this remains a relatively easy car to get into, with its lowish sills, conventional doors and respectably large door apertures. Occupant space once you’re in is pretty good though not quite class-leading. The interior still seems laudible for its apparent tactile quality and high standard of finish, while the Virtual Cockpit instrument display still has the capacity to impress with its slick graphical configurability. If you’ve seen it all before inside an Audi Q2, of course, you’ll have considerably less reason to be impressed.

There’s decent cargo storage under the bonnet, and a bit of useful space for smaller bags and coats behind the seats; so practicality’s good. That said, if you want a really practical mid-engined supercar these days, you’d probably buy a McLaren 570 GT instead – which is just another factor that’s made life a bit harder for this car over the years.

A good job, then, that many wouldn’t need a second reason to own an R8. Even though the car’s entry-level price has just crept up by another couple of percentage points, it remains truly remarkable to discover that an engine as epic as this V10 can be had in something costing little more than the price of a mid-range Porsche 911. The soundtrack, the incredible linearity and the unfiltered, unexpurgated, high-revving charm of that engine are wonderful reminders of a time when crisp atmospheric aspiration was a minimum requirement for a mid-engined exotic like this. And yet somehow it’s also such an esoteric and unusual motor, unlike any other I can think of. A motor fit to utterly dominate the whole character and make-up of a car like this, too – which it duly does.

Both the R8’s standard passive steering set-up and its optional active-variable-ratio ‘dynamic steering’ system have been retuned as part of this facelift, but the latter has only been made available on limited-edition ‘Decennium’ cars in the UK so far (Audi says it’ll be added to the rest of the model range later). The standard set-up is unusually slow-geared for a supercar, having fully three turns between locks and a not-especially-tight turning circle. And, while it does show some worthwhile but modest improvements on weighting and contact patch feel, that standard steering rack is your first clue that what you’re about to experience is a car whose ride and handling are like backing vocals to the car’s soprano combustion engine.

The standard R8’s ride is unexpectedly fluent and supple – the kind that tends to keep contact patches in unwavering contact with Tarmac, and that gives you the confidence you need to unleash a 562bhp engine on a typical country road without really thinking about it. There no tetchiness about the R8’s damping, or highly-strung excitability about its springing; just strangely pragmatic poise and real-world purposefulness.

The car feels heavier and softer than most of its ilk when you’re hurrying through a corner; body control is still very good, but not so good as to cut lateral roll out completely, or to mask the influence of the weight of that engine, which is made to feel as if it must sit at a fairly lofty height behind your shoulder. The upshot? That this particular R8 doesn’t carve and rotate its way towards an apex with the keenness that mid-engined cars often show. It’s certainly no slouch for handling response, though – and it knows all about imperturbable on-throttle traction and stability. But it isn’t so feisty; and, as regards its handling at least, it isn’t that much fun.

For outright balance, limit-handling adjustability and that last layer of fully formed driver appeal, the R8 is likewise to be found wanting. The car’s all-paw drivetrain doesn’t allow you as many options to move the rear axle around with power as rival rear-driven supercars supply; and while the chassis makes it remarkably easy to carry speed and wring every last drop of fury out of that V10 wherever and whenever you dare, it doesn’t deliver handling as lively or engaging as you might want from a top-level driver’s car. 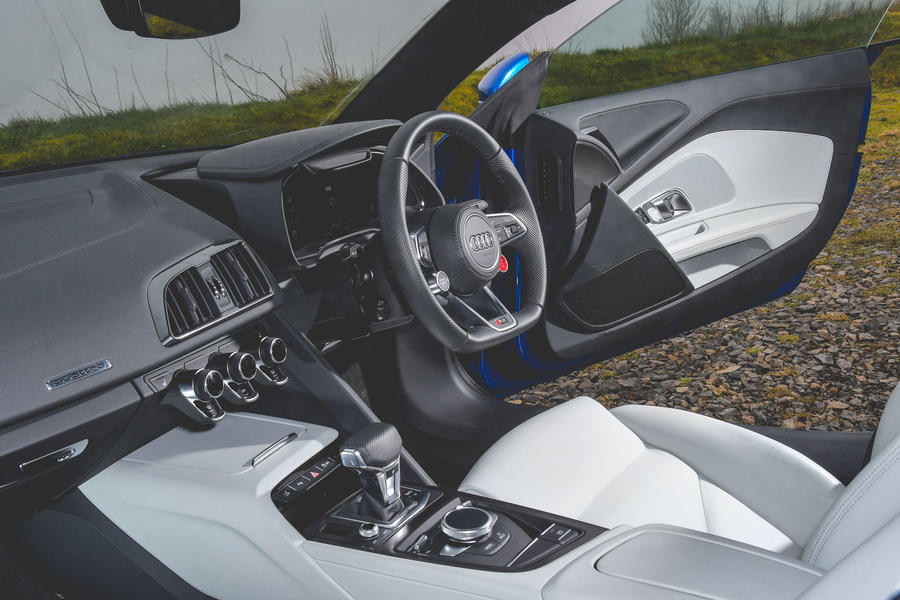 Driving the Audi R8 in this form really does feel like strapping on that Lamborghini V10 as if it was some super-low-altitude jetpack, and then howling off down the road. The engine is significantly greater and more special than what you’ll find in most rivals at its price, but it powers a car that has a curious lack of dynamic swagger, and perhaps a shortage of excitement and complexity about the rest of its driving experience.

We’ll report back on the differences made to that mixture by the new V10 Performance version’s stiffer suspension springs, and its optional lightweight anti-roll bar and dynamic steering set-up, when we can. And who knows, they may be telling.

Until then, the most striking point to observe here is how plainly Audi’s supercar seems to have reverted to the firm’s wider performance car dynamic character type over the years it has been with us. Because just over a decade ago, the original R8 4.2 had the handling smarts to win one of our annual Best Driver’s Car titles; it was a world-beating prospect.

But, having suffered a notable decline on driver appeal in transformation to its second model generation, the R8 now seems to have shed another layer of its old dynamic mystique. Were it not for that V10 engine it would now be hovering dangerously close to a descriptive status we've not found a use for in more than a decade-and-a-half of road testing: that of the boring supercar. 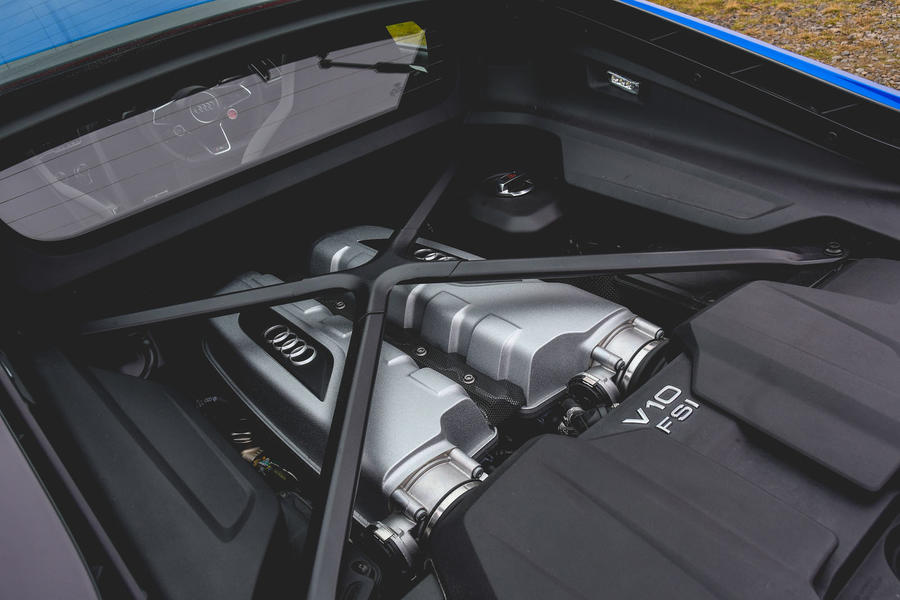 they have been faking tailpipe emissions, why not go the whole hog and fake the pipes as well, it is probably acceptable on a cheap Korean City car, but its not on a supposedly "supercar" from a premium brand, but Mercedes are just as guilty..

I cannot believe people are

I cannot believe people are defending fake pipes on any car, let alone one like this.

I was recently following a current A8. There were two large pipe-shaped things where the pipes should be. But you could see the actual pipes sticking out and down below the bumper, completely unattached to the fakes.

I cannot believe people are defending fake pipes on any car, let alone one like this. I was recently following a current A8. There were two large pipe-shaped things where the pipes should be. But you could see the actual pipes sticking out and down below the bumper, completely unattached to the fakes.

So they put chrome or whatever to make the Exhaust look bigger than it is, it’s doing it’s job.

The pre facelift shape was