From £120,3058
Open-air R8 and Audi’s most potent V10 are a dazzling match, despite the supercar's dynamic and ergonomic flaws
Open gallery
Close

Membership of the 600bhp club, for one, because a heightened compression ratio for the mid-mounted 5.2-litre V10 has released an extra 69bhp and 15lb ft. There’s also a 25kg weight saving – although, at 1695kg, the car is hardly dainty – as well as carbon-ceramic brakes, sports seats and no shortage of carbonfibre trim, both inside and out. The resulting performance figures - more on which in a moment - are now a match for anything this side of a McLaren 720S.

The biggest visual differentiator Plus cars get is a sweeping gurney flap on the trailing edge of the rear deck. This, with the carbon rear diffuser, helps develop a claimed 100kg of downforce over the rear axle at top speed. Our test car is also presented in handsome Monterey Green (£3400) with a quilted Cognac Brown interior (£7000) – both are Audi Exclusive options. You could, for no additional cost, have the carbon sills and spoiler painted the same colour as the rest of the car.

As per the standard Spyder, suspension remains by double wishbones all-round, with the quattro four-wheel-drive system capable of sending all available torque to either axle. The rear operates through a mechanical limited-slip differential.

The characteristics of that driveline, as well as for the throttle mapping, steering, exhaust system, optional adaptive dampers and gearbox, can be altered through Audi’s familiar Drive Select function. With a choice of Comfort, Auto and Dynamic for each parameter – in addition to three umbrella programmes for Dry, Wet and Snow – the permutations are plentiful, and an Individual mode usefully allows you to switch the car into your desired set-up at the press of a button. 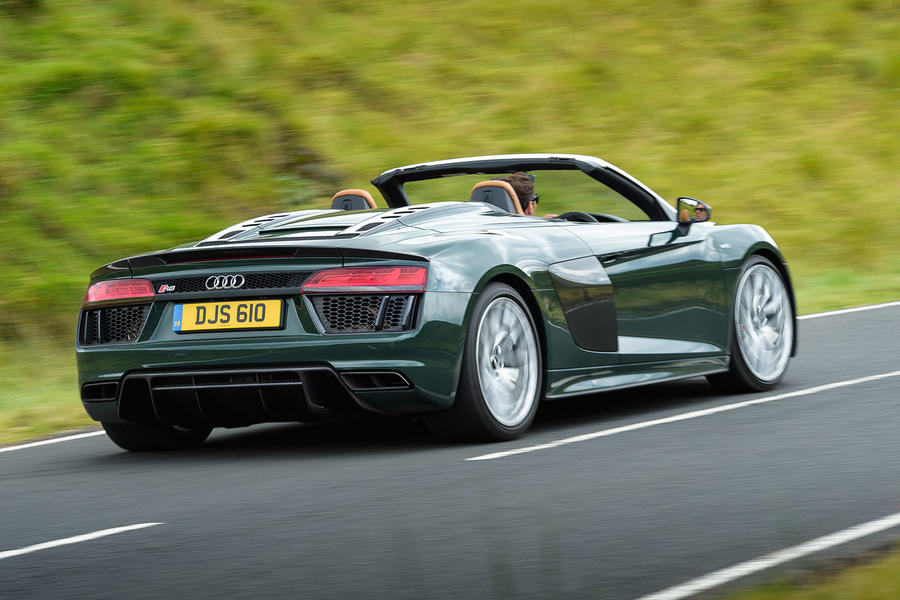 Those of a shy disposition will abhor the suggestion, but we’d wager that all but the most steadfastly introverted readers would eventually give in to the charms of this steroidal roadster.

You need only lower the 44kg fabric roof and engage Dynamic mode along with the optional sports exhaust. Your right foot will do the rest, as it involuntarily sends the most soulful series-production powerplant on sale to its ear-splitting 8700rpm finale at every opportunity. Lifting out of the throttle offers no respite, functioning as little more than a cue for the engine to drench its exhaust manifold with fuel. The resultant pops and bang are decadent, disorderly and destined to raise a smile time after time.

The raw figures – 0-62mph in 3.3sec and a top speed of 203mph – are monstrous for a car that’ll happily cruise along with apathy of a Volkswagen Polo Bluemotion if that’s what you ask of it. The R8 Spyder V10 Plus feels good for them, too, not least because of that extraordinary exhaust note, which is overlaid with ever-present cam-scream. Thanks to the engine’s substantial displacement, pick-up is also effortlessly potent at seemingly any point in the rev range.

As we’ve come to expect, Audi’s seven-speed S-tronic dual-clutch transmission operates with crisp dexterity, swapping between one or more ratios at the flick of a paddle, of which we’d like a slightly more engaging action. Left in automatic mode, the car will drop gears with almost prescient haste if, say, an overtaking opportunity should unexpectedly arise, before returning the engine to hushed serenity in a similar fashion. Simply, engine and gearbox are a match made in heaven.

Indeed, increased proximity to the dry-sumped V10 Plus engine – stubbornly, wonderfully atmospheric as its rivals bolt for the turbos – is probably reason enough to buy this car. Which is just as well, because it can be difficult to make a case for it as a serious tool for enthusiasts. For one, moving the rear bulkhead forward to accommodate the roof mechanism means the seats will either go adequately low or extend adequately far back, but they will not do both. This car can therefore feel cramped inside, despite its clean-cut opulence – although not to the extent that most people wouldn’t eventually find a way to get comfortable. Committed drivers will nevertheless require a more natural position.

More seriously, the light steering, mercilessly stiff chassis (even with our car’s optional magnetic ride set to Comfort, which is advisable at all times on British roads) and over-servoed brakes also mean you can’t always lean on an unsettled front axle with quite the confidence you’d like. That doesn’t particularly matter in the dry, where the quattro drivetrain – shod with 305-section tyres at the rear axle on our test car – develops almost unbreakable grip and traction. However, on damp roads it can be unnerving, particularly given the car’s weight.

Ultimately, the Spyder V10 Plus is some way off the richly communicative carbon-tubbed chassis of the McLaren 570S Spider, although it is the more easily loveable car of the two. The same applies to any of the Audi’s turbocharged rivals, except perhaps the Ferrari 488 Spider. 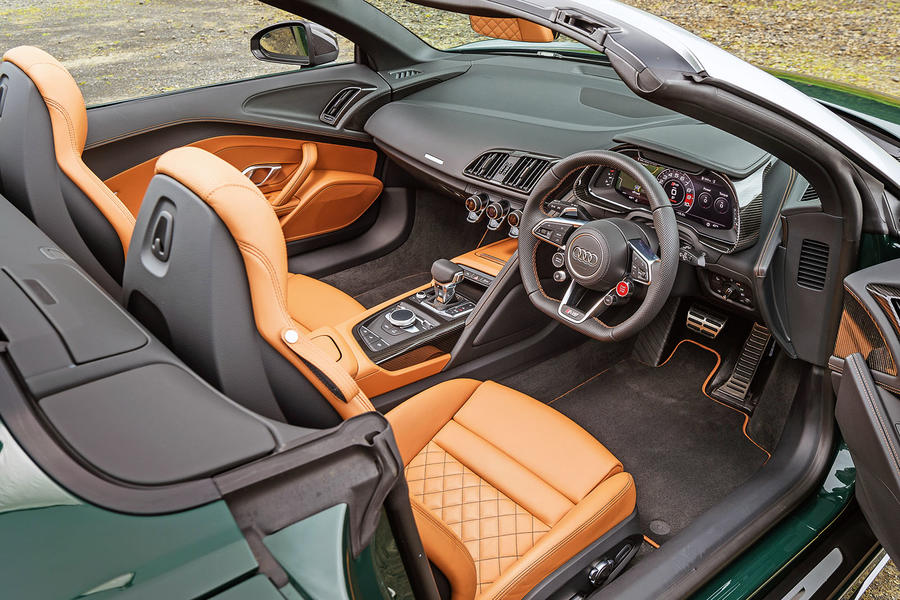 And that’s the nub of it. Drop-top supercars are so often bought on grounds of character before capability, and very few howl like the V10 Plus Spyder howls. It’s also disturbingly fast, extremely usable and can, if you’re feeling shy, go comparatively incognito.

The R8 Spyder V10 Plus is therefore a unique proposition – particularly when you consider that access to the only other engine quite as explosively endearing as this one comes attached to the £205,000 Lamborghini Huracán Spyder. 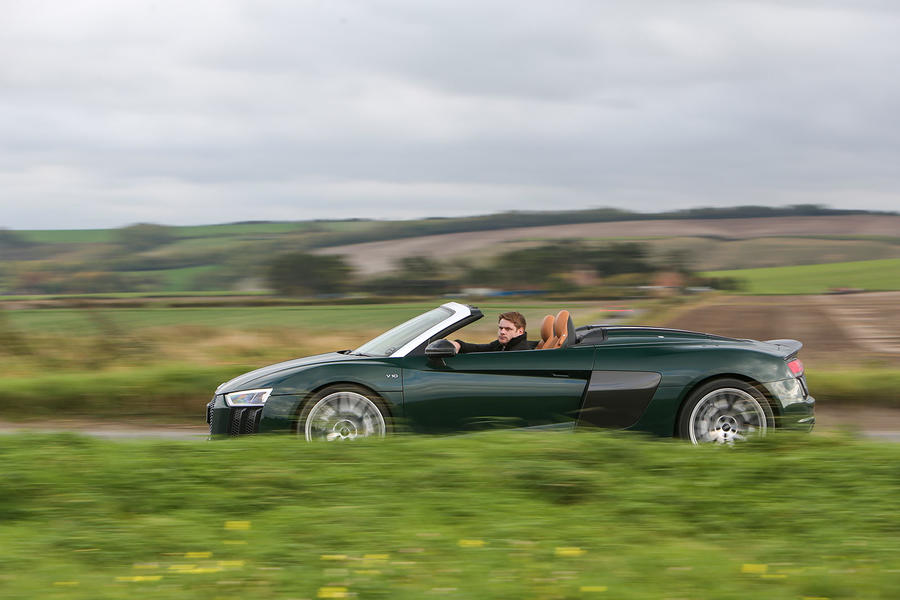 £7000 for the quilted leather, but theres only 2 seats. Thats mad money, does look nice though.

I think the author was referring to the sensory character and ambience of the engine, rather than using 'atmospheric' as a synonym for normally aspirated.

So turbo engines don't employ air in their operation? What's wrong with the phrase - normally aspirated? The phrase "athmospheric" makes no sence at all - 100% silly.

So turbo engines don't employ air in their operation? What's wrong with the phrase - normally aspirated? The phrase "athmospheric" makes no sence at all - 100% silly.

Er, atmospheric pressure rather than a multiple thereof.