From £120,3058
Convertible R8 isn’t an outstanding driver’s car, but its V10 soundtrack and refined manners appeal in their own unique way
Open gallery
Close

This is the 2019 version of Audi’s R8 Spyder, which has finally touched down in the UK following its reveal last year. It’s got two seats, a convertible roof and a rather large naturally aspirated 5.2-litre V10 engine positioned just aft of the cockpit – all of which makes it sound like a rather thrilling prospect indeed.

This particular car is the Performance version, which used to be referred to as the Plus, but a change in nomenclature has been employed as part of this facelift in order to align the R8 with the wider Audi Sport range. Anyway, where the Plus model’s V10 previously developed a mere 602bhp, it now churns out 612bhp. Torque has been increased too, rising to 406lb ft, which is delivered at 6600rpm. Yes, that’s six-thousand, six-hundred revolutions per minute, from a V10 engine, in a car with a collapsible roof. How are your knees feeling? A bit weak? Thought they might be.

Beyond the increased output from the engine, there are only a handful of changes that have been made. Audi’s engineers have subtly retuned the calibration of the suspension and steering, and it also now looks worse than it did before (to this tester’s eyes, anyway). Inside, the cabin is much the same as it’s always been, which is to say that the stereotypical description of it looking like a slightly larger TT still applies. 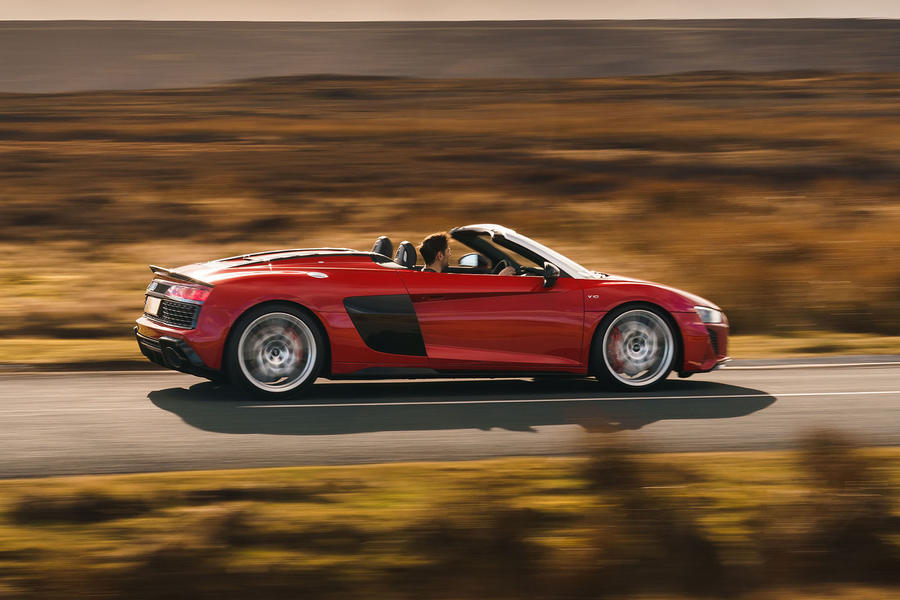 Easy to get in and out of, and spacious enough once you’ve lowered yourself down into the cabin. Our test car came equipped with the standard-fit bucket seats, whose torso- and hip-hugging bolsters are reassuringly supportive. The driving position is okay, if still some way off that which you’ll find behind the McLaren 570S’s dihedral doors. The R8 is just a bit too short on adjustability for my liking; I found the steering wheel didn’t quite offer enough in the way of reach, leaving my feet hovering slightly too close to the pedals.

That said, the V10 engine has a not entirely unsurprising ability to make you forget such complaints from the moment you press the large red start button on the R8’s Alcantara-clad steering wheel. Even at idle, the aggressive, sharp-edged timbre of its rumble informs you of the fact you’re sitting mere inches ahead of something very special indeed.

Bury the throttle on a straight bit of road and the result is every bit as dramatic as you’d expect. Acceleration is delightfully linear and impressively rapid up until 6000rpm, at which point it all becomes really rather absurd. Describing the accompanying soundtrack as electrifying would be underselling it somewhat, too.

The thing is, though, you can’t help but feel that the pace and the noise are there to mask a car that’s otherwise not quite as exciting as its crib sheet might lead to you believe. The steering, for instance, is impressively responsive and lends the R8 a front end that can change direction with commendable agility, but you never get the sense that the car rejoices at the prospect of being prompted to do so. This isn’t necessarily down to a lack of feel - there is actually a whisper of communication present if you go searching for it, but there’s also an aloofness about its dynamic character that you absolutely won’t find in, say, a McLaren 570S or a Porsche 911 GT3.

The flip side is that what the Audi R8 lacks in expressiveness, it makes up for in sure-footed composure; and it doesn’t seem unreasonable to presume that many will be attracted to the almost unflappable manner in which it clings to the Tarmac. That’s not to say you can’t make it pivot around its centre by backing into a corner on the brakes, or with a subtle lift of the throttle mid-corner, but it never feels as though it really relishes being driven in such a fashion. It feels characteristically Audi in that sense - and for many that will be a draw.

The same can be said of its impressively fluid ride. Not only is it supple and controlled at speed, it doesn’t fall apart at more relaxed speeds, either. You could happily trundle around town in the R8 all day: the seven-speed dual-clutch ’box is impressively smooth when pulling away from a standstill given how quickly it’ll swap cogs out when you’re on maximum attack; visibility out of the cabin is good; and the control weights are light. It can be a civilised, comfortable car. 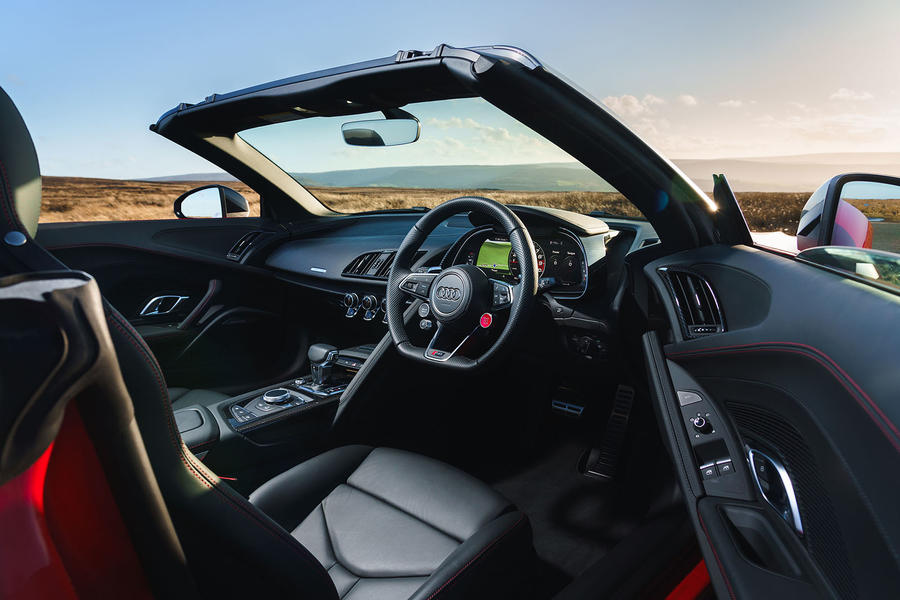 At this price bracket, the £149,890 R8 Spyder V10 Performance does find itself in close proximity to some truly excellent driver’s cars - the McLaren 570S Spider among them. That car’s V8 might not be quite as special as the Audi’s V10, but it steers, handles and rides even better, and the kiwi-shaped badge on its nose carries far more prestige than the Audi’s four rings.

Is the Audi a thrilling supercar, though? Dynamically, it's a bit too serious, but that engine certainly is and it gives the R8 a strong USP next to rivals that are increasingly being downsized and turbocharged. It’s also the reason I’d opt for the Spyder over the coupé: it’s the car’s party piece, and the scope the folding roof provides to further bask in the glory of its atmospheric soundtrack is tough to ignore. It might not be the most descriptive supercar to drive, but its engine makes it an increasingly rare commodity. Savour it while it lasts. 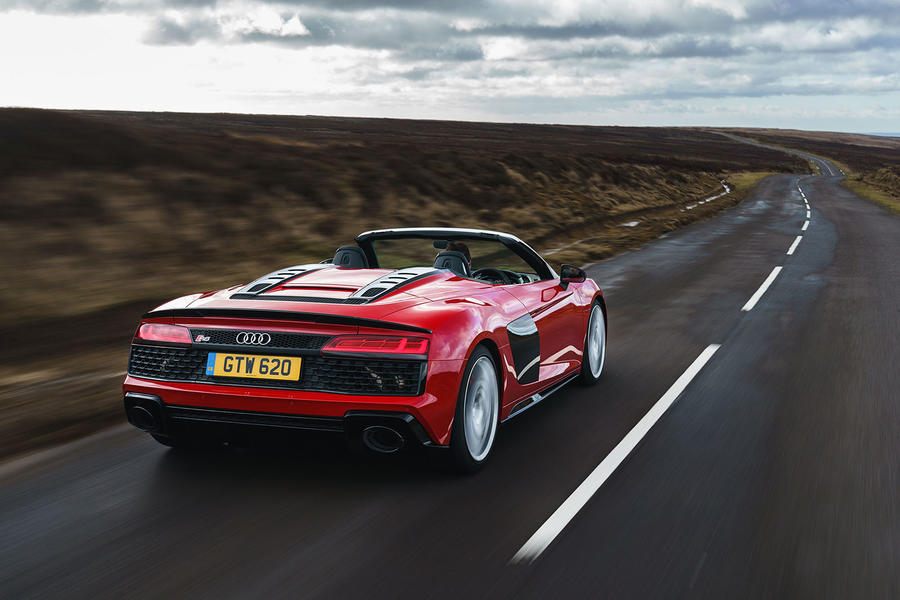 Simon - if you really want to get inolved with the road feel - get a sports bike.  For a fast fun car the R8 sounds great, not too bonkers for the road and hits all your senses.

Simon - if you really want to get inolved with the road feel - get a sports bike.  For a fast fun car the R8 sounds great, not too bonkers for the road and hits all your senses.

Pointless comment re sports bike. This a car forum, the clue's in the name ---- AutoCAR