8
Audi's fast and frugal SQ7 gets a fully loaded Vorsprung variant. Is it worth the £15k extra Audi asks for it?
Open gallery
Close

The latest attempt by a premium brand to bundle a load of popular options into a bells-and-whistles special edition and boost profit margins. That’s the cynic’s view of the new Audi SQ7 Vorsprung Edition, at least. We can mock, but it makes perfect sense from a business perspective.

It’s a particularly shrewd move where the SQ7 is concerned. At just under £71k, the base car is already good value given that it offers the same high-tech powertrain and trick suspension as its platform-sharing sibling, the Bentley Bentayga diesel, but for almost half the price. That’s despite the Audi having two more seats and more up-to-date cabin tech.

So what does the Vorsprung Edition bring along to justify the extra £15,520 Audi wants for it? A long list of extras – that’s what.

Extras such as mammoth 22in wheels, matrix LED headlights, glitzy additional LED lighting inside and out, titanium black trim, sports seats in premium quilted leather, Alcantara headlining, a panoramic sunroof and even a leather upholstery package for the dashboard. A Bose 3D sound system, Audi’s Virtual Cockpit and a head-up display, plus more driver assist systems than you can shake a stick at, complete the additions.

We’ve waxed lyrical about the standard SQ7’s seriously impressive all-round ability before, and thankfully the Vorsprung additions don’t dramatically alter that. Audi has just traded in the subtle aesthetics of the standard car for the more overtly showy look favoured by rivals, such as the Range Rover Sport.

The 429bhp 4.0-litre V8 diesel, with its two ‘hot inside vee’ mounted turbochargers and electrically driven compressor, continues to deliver the effortless pace we know and love. You’re acutely aware that the 2.3-tonne SUV is being walloped at the horizon at an astonishing rate of knots, but the linear power delivery makes it surge confidently, like a 747 on its take-off roll.

It’s not lightning-quick away from a standing start, partly due to the old-school torque converter drafted in to handle the immense 664lb ft of torque delivered from near-idle. But the way it gathers pace from, say, 30mph up to the national speed limit is staggeringly relentless. With the exhaust in its loud mode, it even does a half-decent impression of a burbling petrol V8. 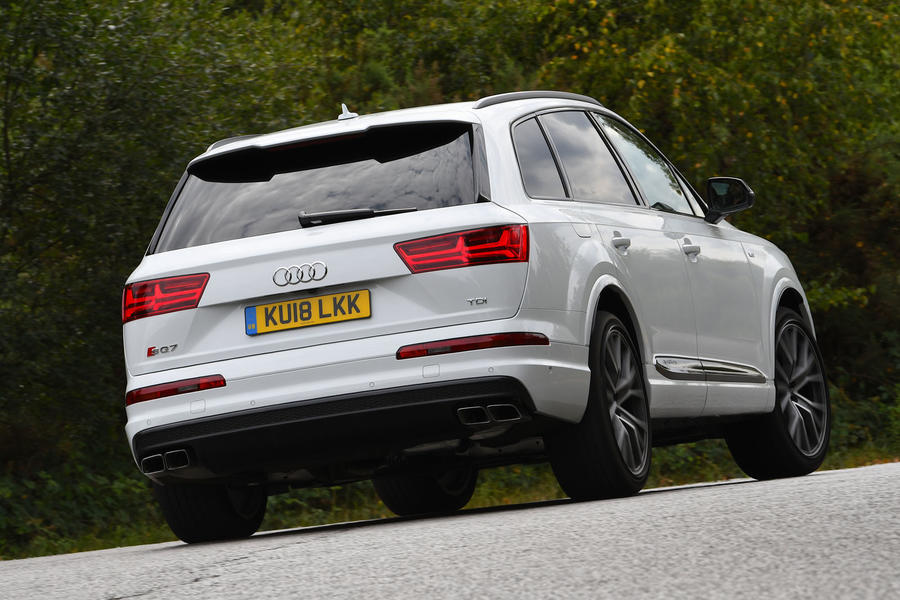 But the SQ7’s other forte is in making smooth, near-silent long-distance progress, and that’s where one Vorsprung addition isn’t as welcome. Those huge wheels, wrapped in tyres with a neat anti-kerbing lip jutting out, introduce an extra degree of road roar into the cabin that isn’t there in the standard car. Not much, but you’ll likely have the radio up a notch or two louder to compensate.

The extra unsprung weight of those wheels means the air suspension can get caught out by around-town potholes, sending a jolt into the cabin. Thankfully, once out of city limits, it’s very nearly as cosseting as it is on smaller alloys, particularly with the dampers left in auto or comfort mode.

There’s no impact on handling, either. The SQ7 Vorsprung is still mightily adept at hiding its weight (if not its size) in the bends, even without the clever active anti-roll bars fitted. The meaty steering allows you to place it on the road accurately, and its composure is more akin to that of a well-sorted executive saloon.

Inside, the extra material richness afforded by the nicer level and padded dash are welcome, if not strictly necessary, given how granite-hewn the standard car already feels. We’re not blown away by the Bose stereo, however – its overly dominant subwoofer masks any extra clarity that might be heard in the overall sound.

We have no doubt the SQ7 Vorsprung will sell, given its target audience. The ever-increasing range of posher and pricier SUVs on the market shows that plenty will pay for that extra bit of presence and opulence.

The package seems fair, since all the options included would add quite a bit more than £15,000 to the car’s asking price. But that’s still a substantial chunk of money (enough to buy a middling Ford Fiesta) for some largely superficial additions.

There’s no shortage of showy SUVs on the market catering for the well-heeled. And we’ve always respected the standard SQ7’s quietly smart sophistication that fits in with its lack of aggression on the road.  All in all, we’d rather save some cash and instead spec the base car with a few choice tech and trim options.

M6 southbound this morning, I only saw two people in vehicles doing really stupid things.  A black one, outside lane, tailgating four feet off the rear bumpers of each successive car until it moved over, including vans that he really couldn't see past; then a red one, WOT coming out of the toll booths, outside lane, pulls over to middle lane, undertaking three vehicles on the inside, then cutting back out into the outside lane.

Both very dangerous, both in Audis.  Vorsprung durch pimmel.

The Q7 E-tron is that much better

If you like the Q7 (and I do) then the E-tron is a better bet.  Charging at home, I'm getting 65 mpg out of mine with my current mix of long and short trips.  Way better than the dismal Outlander I had before which gave 45mpg.  Similar performance to the SQ7 with the electric boost and a better ride on the 19" wheels too.  And you can tow a racecar on a trailer if you want - don't bother trying that with an Outlander.  No third row of seats, but I don't need 'em.

Same picture as the Porsche Cayenne review or have i had too much gin?