From £69,9559
New top-rung Audi A8 saloon is a technological tour de force and a very refined, relaxing luxury car – and its best may yet be to come
Open gallery
Close

The Audi A8 may be the executive limousine of the future but it’s also a car built like Ingolstadt used to make its flagship saloons. It feels like a true pioneer with an old soul.

This Mercedes-Benz S-Class rival, rolling out to its very first British owners in January 2018, is a car that seems to refocus its German maker’s philosophy absolutely dead-centre on its old ‘advancement through technology’ mantra. That mantra has felt like a vestige of Audi’s former self at times throughout the past two decades, while the firm’s management has been convinced that things like outstanding design appeal, dynamic handling, ‘quattro’ four-wheel drive and market-leading powertrain efficiency would sell its cars better.

But, having made its returning influence plain in last year’s second-generation Audi Q7 SUV, ‘vorsprung durch technik’ is now back with a bang in the fourth-generation A8; as well, we might add, as with a fancy flash of tail-lamp and a bit of musical fanfare.

Longer and taller than the car it replaces, the new A8 has been developed on the Volkswagen Group’s ‘MLB-evo’ platform as used by the Q7 and Audi Q5, as well as the Bentley Bentayga and the new Porsche Cayenne. But just like its forebears, the new A8 takes the luxury car into new territory in the multi-material mix of its body structure, which is comprised of aluminium, steel, magnesium and carbonfibre-reinforced plastic all joined using no fewer than 14 different techniques.

At launch, the car’s engine range consists of a 3.0-litre, 335bhp ‘55 TSI’ twin-turbocharged petrol option as well as the 3.0-litre, 282bhp ‘50 TDI’ diesel that we were loaned to test. Along later will be a more powerful petrol-electric plug-in hybrid model compatible with ‘wireless’ inductive charging, as well as higher-end V8 diesel and W12 petrol derivatives.

All A8s are 48-volt ‘mild hybrids’, however – the car having a sufficiently powerful electrical architecture to allow it to coast, engine-off, for up to 40 seconds at extra-urban and motorway speeds; to scavenge power more quickly on a trailing throttle than a car with a 12-volt electrical system could; and to run some highly sophisticated powertrain and suspension systems.

Among the latter are a three-chamber, height-adjustable air suspension system fitted to every A8 as standard, and a four-wheel steering system (coupled with an ‘active’ variable steering rack) that is offered as an option and that our particular test car had fitted.

And in addition to all of that, there’s the new Audi A8’s knockout draw. This promises to be the first production car for sale anywhere in the world with Level 3 conditional automated driving, by which Audi means it’ll be a ‘driverless’ series-production car like no other the world has yet seen.

The suite of technologies that its maker is packaging as ‘Audi AI’ will allow the A8 to drive itself unsupervised for much longer periods than a current ‘piloted’ or ‘drive-assisted’ production car can – although only in heavy motorway traffic and then only at speeds of up to 37mph. The A8 will also be able to park itself, either in a bay or in a garage, once you’ve got out of the driver’s seat and are keeping tabs on it via your smartphone.

And coming into the A8 range at around the same time as the Audi AI autonomous driving functionality, currently expected in spring 2018, will be a fully active optional electromechanical suspension system capable of reading the topography of the road ahead, and of manipulating each of the car’s wheels independently in advance of every bump and ridge they’re about to cross. 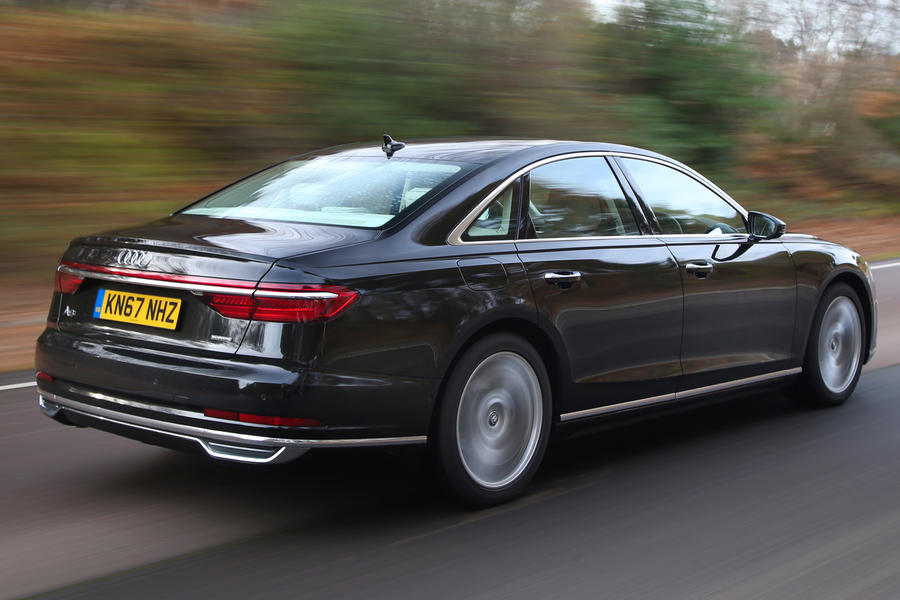 While the verdict on the A8’s really headline-grabbing features – the wireless battery charging, autonomous driving and active suspension technology – will clearly have to wait, this already feels like one of the most advanced, refined, modern and luxurious cars on the road even without them.

One thing you can’t fail to notice, however – either on your way into the A8 or once you’re settled behind the steering wheel – is the remarkable impact that Silicon Valley has had on this car. The A8’s door-handles, both inside and out, contain ‘microswitches’ as well as mechanical linkages; you barely need to move either to release the closure.

Conforming to a new control regimen called ‘MMI Touch Response’, the car’s centre stack has been stripped almost completely bare of physical switchgear. It is made up of two widescreen touch-sensitive displays through which you adjust the temperature of your heated seat; cycle through the car’s various driving modes; adjust the plotted route in the navigation system; and also achieve just about everything else. If features like those don’t instantly bring to mind another conspicuously popular luxury saloon car, it may only be because you’ve never driven a Tesla Model S – a car whose influence on luxury saloons looks like running way beyond its electrified powertrain.

Not that Tesla has thus far proved itself capable of producing an interior of such immutable perceived quality and apparent integrity, and of such outstanding comfort, as the A8’s. The fascia, styled with bold horizontal features and arcing bands of open-grain wood trim and satin chrome garnish, makes the wide cockpit feel even wider than it is. For this tester’s preference, there’s a bit too much ‘piano black’ veneer on the car’s centre console, dashboard and door cards to make its glossy ambience practical and easy to maintain. I’m not so struck, either, on the heavy touch needed to bring a response from the car’s touchscreen displays, nor the slightly contrived-feeling haptic feedback with which each touch is met.

That apart, though, I was deeply impressed with an awful lot about the Audi A8’s driving environment: from the clarity and flexibility of its digital instruments, to the beautifully cushioned comfort of its massager leather seats (adjustable in more ways than you can count), to the lounge-like atmosphere created by its ambient lighting features after dark, and even the way the door pockets are illuminated just as you reach into them.

This, reckons Audi, is the quietest car the company has ever built. Sure enough, the Audi A8’s 3.0-litre diesel starts very smoothly indeed for a compression-ignition engine and, while it raises its voice to a very faint hum when you work it beyond 3500rpm, most of the time it’s incredibly hushed and distant.

Even more remarkable is the sense of isolation you get from wind noise in the car: there’s barely a flutter even at motorway speeds. And over a smooth surface the A8’s suspension is supremely quiet too.

The Audi A8’s refinement levels can suffer over more coarse tarmac, though, when an occasional sense of reverberant hollowness begins to present itself in the ride – albeit perhaps more so on our 20in-rim-shod test car than it might have on a car with Audi’s standard 18s. It’s background noise only, mind you: a gentle rumble that is absent more often than it’s present, and is only open to criticism in a car that otherwise cossets its occupants so effectively.

Audi offers you the familiar choice of driver modes here (efficiency, dynamic, comfort, automatic and individual) and in all of them the A8 is tuned in a way entirely befitting of such a large luxury saloon. That doesn’t mean it feels like a bigger Audi A6, of course – though it does very well, at times, to shrink itself around you when the need presents.

In ‘dynamic’ mode, the car feels amazingly wieldy and directionally responsive for its size and heft, though the consistency of its close body control isn’t always brilliant. In ‘comfort’, it glides along with that distinguishing long-wave ride compliance that truly comfortable cars all share, though the suspension does permit the odd muted, under-damped thump to trouble the bump-stops. ‘Automatic’ mode is, by and large, a convincing attempt to split the difference and makes the A8 pleasingly precise-handling and easy to place on the road; insulated and beautifully modulated in most of its controls; and thoroughly laid-back in its general demeanour.

It isn’t a driver’s car; not that sub-6.0sec 0-60mph sprinting potential is anything to be sniffed at from a 45mpg, two-tonne diesel limousine. But it’s certainly very pleasant indeed to drive, and it makes a 250-mile journey less wearing than a five-mile trip can be in other cars. 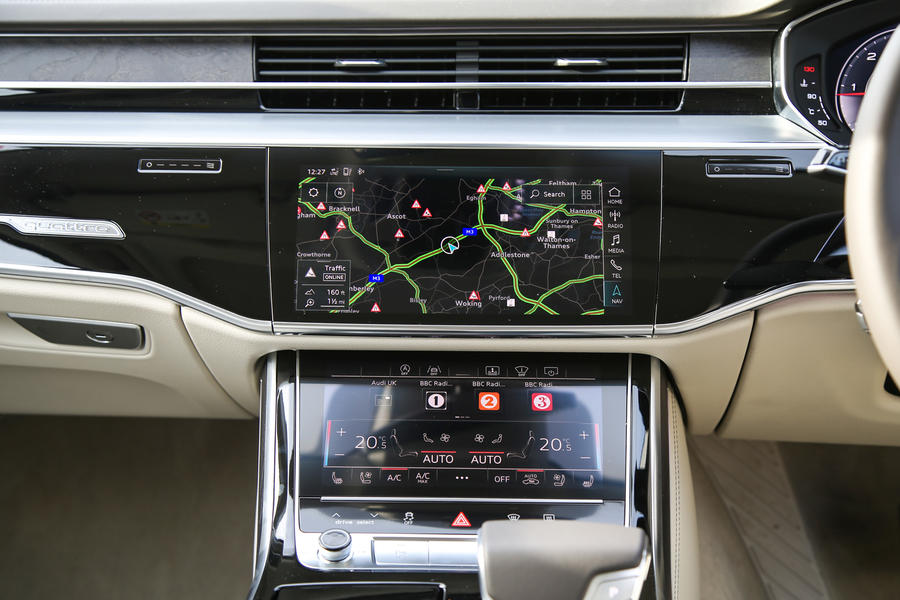 With the new A8, Audi has created a consummate, cosseting and yet pleasingly simple big saloon that takes you back to when the likes of the 1980s-era 100 and 200 really were the most advanced executive cars of their time. In spite of all the state-of-the-art technology in the mix here, what is most likeable and refreshing about this car is that it somehow feels like an old-school Audi – and a really authentic product as a result.

It clearly belongs at the sharp end of our luxury car class, but it’ll take a group test meeting with the facelifted S-Class – and a full road test of a car with Audi’s complete package of autonomous driving technology – to properly decide whether it’s the very best car of its type.

You won’t have to wait long for the first of those follow-up appointments, rest assured. But for now, there’s certainly no reason to doubt this car’s accomplishment, its stature or its potential to rule the luxury-class roost. 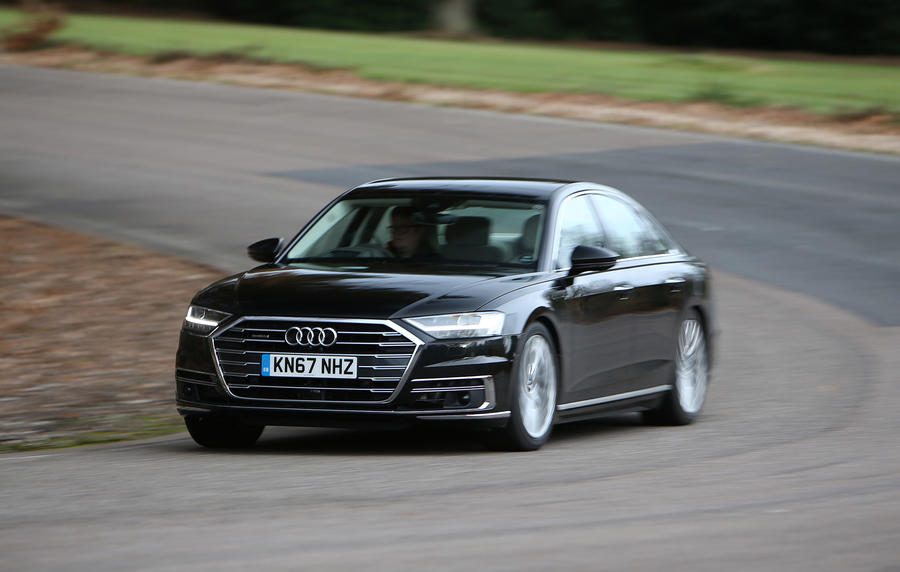 Saw this was about audi and audi A8 in particular A8 and quickly scanned through..nothing interesting to from a driving point of view as per usual.

I have now worked out an up side to Brexit ........we wont be paying VW for these blanderlux limo's to ferry arround the EU elite. The styling is truly awfull, angles lines, ever larger grill A4 x 40% . I had the misfortune to be behind an old model A8 with the retina burning led brake lights, surely there is no reason to be so bright Mercedes are as bad and as for the dodgy pointing strobing indicators they look like some dodgy back street club sign! For a badge founded on good taste they have really lost their way too many products chasing too many sales.

Hybrid controls - where you have one or two high-quality physical 'knobs' embedded into the screen controlling the menus, would be something i'd go for. There's no tactile quality to stabbing in the vague direction of a screen-button.