From £69,9558
The new Audi A8 is sophisticated, undemanding and full of technology, but is it enough to knock the supremely good Mercedes-Benz S-Class off its perch?
Open gallery
Close

This, the new A8, has the greatest capability for autonomous driving of any production car in the world. That, at least, is according to Audi - and even then will only apply once the full complement of 40-plus driver-assistance systems get rolled out, after deliveries have commenced early next year.

The delay stems from the fact that Audi remains at the mercy of the differing statutory frameworks of the markets it operates in. But what exactly should this comprehensively re-engineered, fourth-generation A8 eventually trim from the job description of chauffeurs the world over?

Audi seems proudest of software it calls Traffic Jam Pilot, which allows the driver to relinquish control of this 5.2-metre-long, two-tonne saloon at speeds of up to 37mph, as long as there is a physical barrier separating both directions of traffic. Other autonomous functions will be able to park the car at the touch of a button (even if that involves pulling into a garage) and should greatly reduce the risk of collision - more on which in a moment.

When the new A8 arrives in UK dealerships in December, it will do so with either a turbocharged diesel or petrol V6, making 282bhp or 335bhp respectively. A twin-turbo 4.0-litre V8 version will come in 2018 (availability in the UK to be confirmed), along with a 443bhp plug-in hybrid and 577bhp W12 to top the range. Quattro four-wheel drive is standard, as is an eight-speed torque-converter transmission. There’s also a new 48V electrical system – first seen in the SQ7 – that bestows ‘mild hybrid’ status on the A8 and allows for engine-off coasting and extended stop-start capabilities.

Audi claims the A8 ushers in a new era of design for the entire brand, although you could quite easily contest that. The neat aesthetic follows on from the latest A4 and A5 models, with an understated silhouette that uses sharp creases and innovative lighting (the A8 gets optional laser headlights and OLED rear lights that offer remarkable fluidity) to inject some vitality.

However, it is not a particularly arresting machine and suffers the indignity of Ingolstadt’s current fascination with fake exhaust tips. The body, meanwhile, is 37mm longer and 13mm taller but around half a centimetre narrower than before. It’s allowed to Audi to enlarge the door openings and stretch rear leg room a touch. 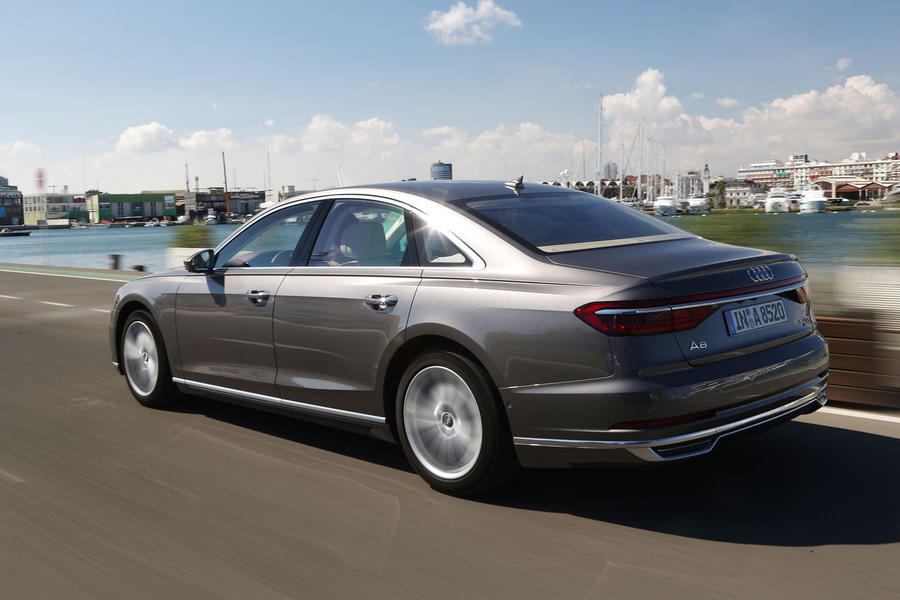 Step inside and your first impression is of a car built to outlast civilisation itself. What the new A8’s interior lacks in the charismatic elegance – some might call it chintz – of the Mercedes-Benz S-Class, it makes up for in the quality of its materials and assembly.

There is no play in the switchgear, no delay in the response of the two superbly crisp central touchscreens and, once you’ve spotted the billet aluminium armrest hinges, no question that it’s all been over-engineered. The many backlit buttons and dials of the third-generation A8 have almost entirely disappeared, making way for glass-fronted replacements whose haptic and acoustic feedback has been judged surprisingly well, and the wraparound dash really does lend the cabin the lounge ambience Audi’s designers speak of. It’s an environment that leaves you strangely cool - but that’s as it should be, isn’t it?

On the car’s international launch, in Valencia, it’s the A8 55 we spend most time in - Audi’s familiar 3.0-litre V6 TDI for the most part making short work of the city’s streets and surrounding glass-smooth motorways, as you’d expect. Unlike the petrol V6 (whose silky character negates the need), it uses active engine mounts that counteract the diesel thrum. It’s not a coarse engine, just a little too present compared with the petrol, which spins effortlessly and also lends the gargantuan A8 pleasingly brisk, rather than merely adequate, pace.

But what about the all-important ride? This new A8 sits on adaptive dampers ensconced in air springs and controlled by Audi’s familiar Drive Select function, with modes from Efficiency to Dynamic, each actuating a different ride height. It breathes with the road impressively well, although the impact of running over bridge expansion joints and the like is still felt a little more keenly than we’d expect. Wind noise is also surprisingly loud at higher speeds.

In its pursuit of torsional rigidity, Audi has installed a magnesium strut brace at the front and a carbonfibre panel that sits across the rear bulkhead.  The chassis hooks into corners neatly during normal driving, its huge coachwork remaining steady once settled onto the outside springs, and the direct (if inert) steering has a column-mounted motor that counteracts the unnatural rate of response brought about by the rear-wheel steering. It works well, and the A8 is a doddle to place between the white lines, not to mention more easily manoeuvrable than before, with its 11.4m turning circle now undercutting both the BMW 7 Series and S-Class by almost a metre.

Predictably, however, this is a machine that puts up with being hustled rather than enjoying the experience. Carry too much pace and the onset of understeer can be sudden, the chunky sidewalls of our test car’s 18in 255/60 front tyres tripping over themselves in the face of two wayward tonnes of high-tensile steel, aluminium, magnesium, carbonfibre and, of course, leather. We’d expect upcoming quicker variants, such as the S8, to remedy this shortcoming.

Going back to white lines: the A8 is continuously scanning for them. Drift out of lane and the car gently adjusts your trajectory, going so far as to allow you to track around long sweepers – and at a decent speed – without using your hands. Cancel your indicators a mite too soon, though, and the car can actually attempt to stop you from pulling onto a slip road. Granted, the level of resistance it channels through the steering wheel is usefully insipid, but this is exactly the type of rough edge we’re likely to encounter as manufacturers try to the polish the driving experience to ever greater levels of autonomous shine.

Due for deployment on next year’s class of A8 – and unfortunately absent from our test steed – is Audi’s new artificially intelligent active suspension. Available as an option, it has the potential to rewrite what’s possible in terms of ride and refinement from Audi, and uses an electric motor to alter the damping characteristics of each wheel in accordance with the road ahead. The same technology allows the car to raise one side of the chassis by 80mm if a T-boning is imminent, allowing the structure’s resilient sills to take more of the brunt. 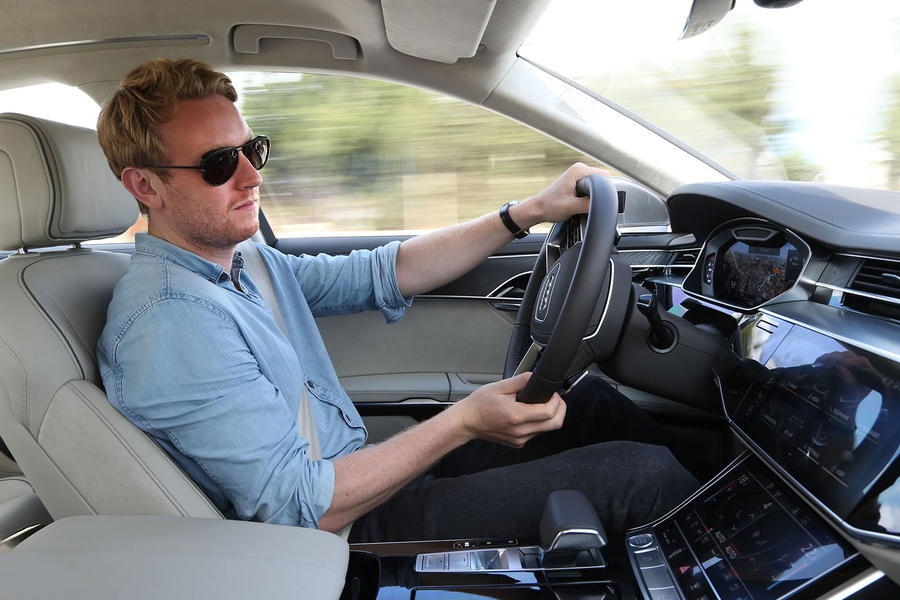 Audi sold 177,566 cars in the UK last year and around 1600 of those sales were of its flagship model. Not a lot, then, but the A8’s significance as a brand builder earns it an extraordinary portion of the R&D budget, not least because of the competition it faces.

At £69,100, the base A8 50 TDI slots neatly into the gap between the £67,940 BMW 730d xDrive and Mercedes’ £72,205 S350d AMG Line. Performance between the three is roughly matched, but the Audi’s combined economy of 50.4mpg lags behind its compatriots by a fraction. This is unlikely to concern most buyers, who will care more about the car’s ability to isolate its occupants from the outside world and glide across the ground as if by magic. For the most part, this new A8 manages both with aplomb.

However, getting to the bottom of this car’s technological capabilities – on which so much of its appeal ultimately rests – will require the time and familiarisation that only a test on home soil can offer. We hope to undertake such an appraisal by the end of the year, but first impressions suggest Audi has delivered a car that’s intuitive to use and undemanding to drive, despite its enormous complexity and size. 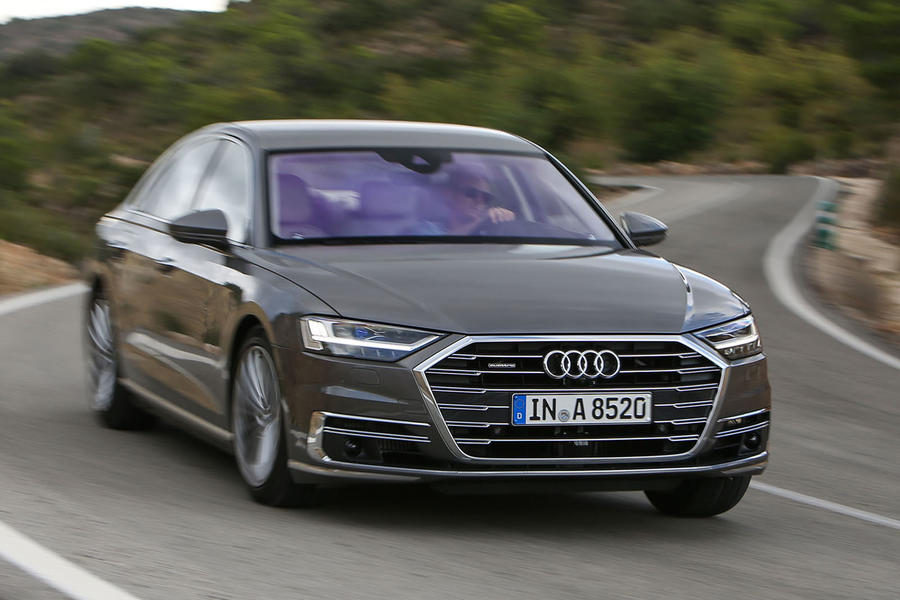 I have always liked the A8 but Audi seemed to drop the ball on the styling front with the third generation, which looked like a bloated A4 but it looks like a stunner in comparison with this new model, which in my opinion just looks plain ugly.

I do like my gadgets but sadly no amount of tech will have me eagerly swiping through the classifieds in two or three years time as that front end and side profile just kill it for me, which is a shame as I only ever purchase big luxo barges.

Watching the car buyer and

Did Hyundai do it before the 2006 Honda Civic?

how can a car that I am sure is gurning be uninteresting? There is no other explanation for that grille.