The first notable change from BMW’s new ownership of formerly independent Alpina comes from the title: this isn’t the Alpina B4 Gran Coupé; it’s the BMW Alpina B4 Gran Coupé. That aside, it is business as usual for this new model, if not the company (more on which another time), which has been remaking BMWs with its own name attached for nearly six decades.

This, then, is Alpina’s take on the BMW 4 Series Gran Coupé, and its take on a fast M variant that BMW doesn’t make. Not yet, at least. It’s “a discreet car for connoisseurs”, according to Alpina product manager Thomas Hackspiel-Cornu, which is very much the Alpina way: it’s a maker of understated, subtle, fast road cars that can be used on a circuit but are built for roads. Fast roads. But roads.So it’s an £80,000 four-door coupé with a 3.0-litre straight-six engine making 488bhp and 538lb ft and driving all four wheels, albeit through BMW’s rear-biased xDrive system, with an eight-speed automatic gearbox. It goes on sale next month.

I know four-door coupés are still considered a bit of a misnomer but they’re rather bigger business than two-door ones these days. The BMW 440i Gran Coupé outsells the two-door variant by three to one, and Audi’s RS5 Sportback does similar to its two-door sibling. And with the absence of an official M4 Gran Coupé (we thought one was coming, but still no sign as yet), this is the closest you’ll get, but with Alpina’s more subtle twist on road-going performance. Alpina owners include the kind of people who like to drive from Frankfurt to Munich rather than fly or take the train. Hence the 187mph top speed and huge maximum torque from 2500rpm.

Alpina has shown off its B4 S Grand Coupe at Goodwood 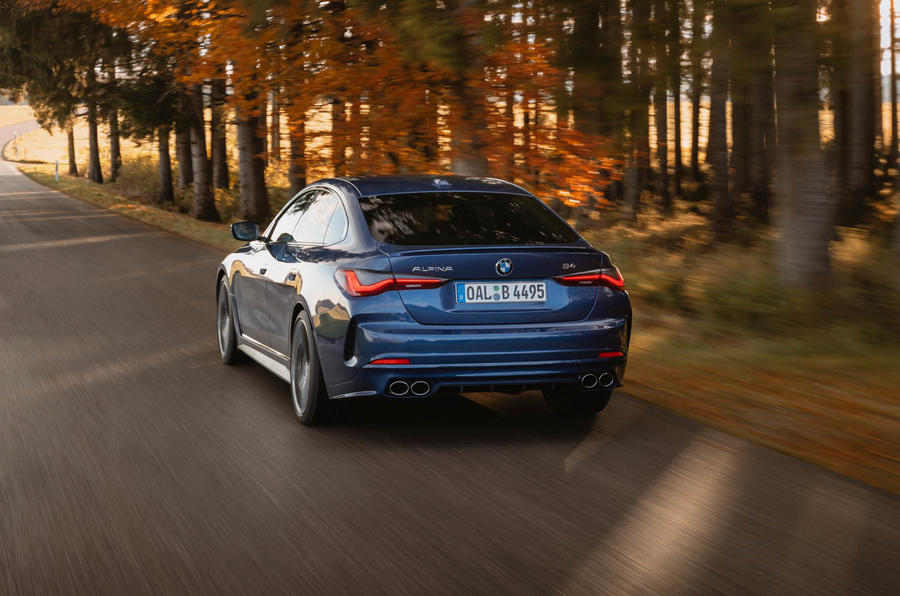 It’s slightly curious, then, that Alpina let us try it on a test track only, at Bilster Berg, a very hilly facility (and once a British army depot site) in North Rhine-Westphalia, which is very smooth, albeit also very long and with a terrific mix of corners. It’s as good a limit-handling circuit as you’ll find, I think. What that did mean is that we could get through a lot of drives in a short time – so more Alpina drives to follow – and it means that if the B4 impresses here, we won’t have to worry about its sporting credentials on the road but only its comfort. Although Alpina doesn’t tend to get either of them wrong, to be honest.

As with the BMW on which this car is based, it’s dead easy to find a great driving position, with a hugely adjustable if slightly too-fat-rimmed steering wheel with shift paddles mounted to it. The brake pedal has a bigger degree of movement than I anticipated but it was a hot day and the car had already been on track a lot. On fresher brakes, I would expect the same modulation but with less pedal movement.

The rest of the interior is largely BMW based but with Alpina touches, such as excellently stitched leather, a small plaque on the transmission tunnel and the application of some carbonfibre trim. There’s a unique Alpina treatment on the instrument cluster and – now new – when there’s somewhere on the infotainment panel that shows a car, it now displays the Alpina version, not the BMW on which it’s based. Even in the right colour.

There are selectable chassis, steering and engine modes as on the base BMW, but on a track I figured I might as well pick the firmest chassis and angriest engine and gearbox, because on the softest setting, I wouldn’t find out much about ride comfort anyway. And with the big accelerative, braking and cornering inputs that a test track puts through a car, the B4 holds up terrifically well for a large, road-focused car on a hot day. 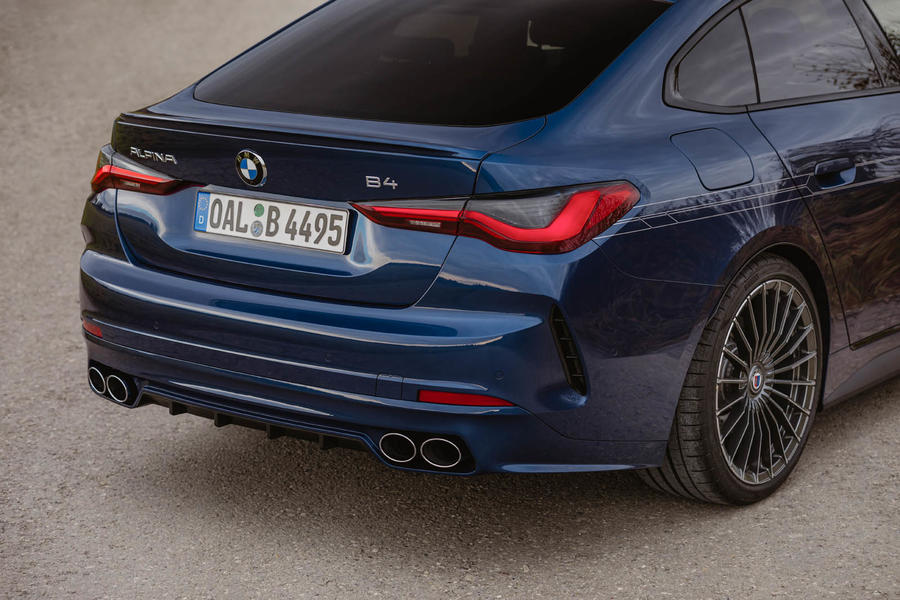 The B4 is fiercely quick to accelerate – 0-62mph is 3.7sec – with smooth and fast gearshifts and, in the sharpest engine and gearbox mode, the occasional and very subtle exhaust pop and burble on the overrun. It has a less gravelly engine note than I remember from a recent M3/M4 experience, with some six-cylinder yelp, but feeling smoother and quieter than an M car. Watching some cars lap from a vantage point beside the track, a fleet of turbocharged petrol or diesel Alpinas makes for a particularly subdued track-day noise. You largely only hear them when you can also see them.

The B4 steers with medium speed and weight (that’s selectable), and with excellent accuracy. Body movements are relatively quick and sharp but very controlled. There’s mild dive under braking, helping plant the nose, and once settled into a cornering stance, the chassis balance is terrific

Alpina’s engineers talk a fair bit about getting the entry speed correct on track. If you try to carry too much speed, this front-engined, 4.8m-long, 1965kg car will nudge into stabilising understeer, as it should do – and as you might like it to, in very long, very fast sweeping bends.

Keep the entry speed calmer, though, and the nose will go where pointed, before holding terrific levels of lateral grip, and then allowing the car to move around mildly on the throttle. The throttle-off engine response is actually quite sharp, too, at least in the upper drive modes, so that lifting off can help the driver play with the chassis balance. There’s no M-car-like drift mode here, and during our circuit-only test, it feels like this car is less mobile and agile than Alpina’s own B3, which is based on a 3 Series saloon. But the state of the tyres after half a day’s lapping could be playing a part in that. Still, it’s tweakable and will drive itself nicely straight on the way out of a slow corner. It bodes quite well for a pleasing neutral road balance.

I ride over whatever kerbs I can to get a feel for compliance of the 255/35 ZR20 front and 285/30 ZR20 rear Pirelli P Zero tyres, which are specifically tuned for this car and therefore wear manufacturer ‘ALP’ markings on the sidewalls. 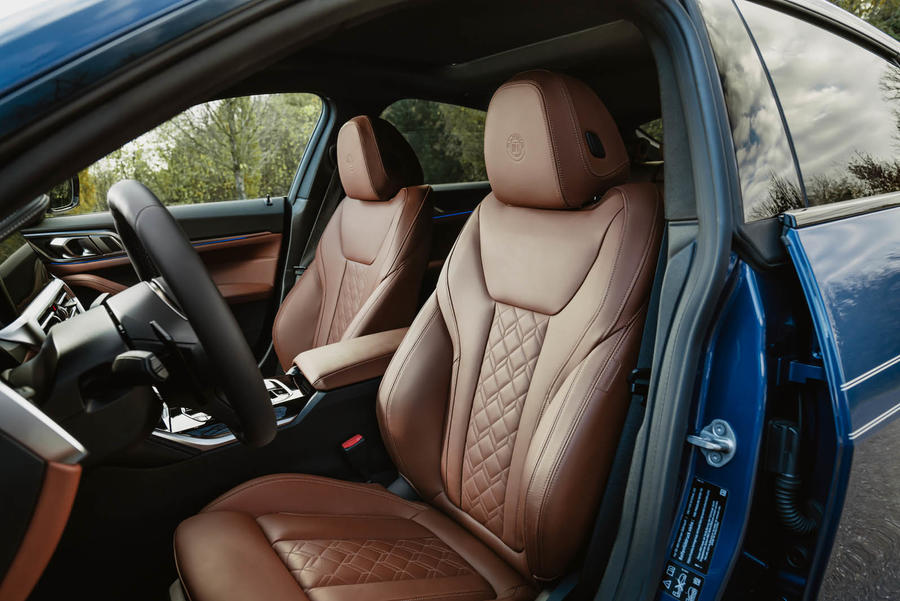 It’s hard to know for sure about the ride quality, but it feels controlled yet absorbent, which is a pretty Alpina way of doing things. They drive better, I think, on smoother German roads than they do on British ones, but traditionally in either case they out-ride plenty of M cars. Alpina doesn’t use run-flat tyres, and as well as its own suspension tune, its own tuning for the variable dampers and different camber settings, it fits its own front anti-roll bar, plus torsional-rigidity-increasing braces between the front struts and the front of the chassis. Details abound.

This could be the last of the new models that Alpina introduces as the entity it has been, rather than the one it will become when its current contract with BMW changes at the end of 2025. I like the B4 Gran Coupé a great deal. But even if I didn’t, I’m not sure it would matter too much to what I’d say if you found yourself tempted, which is: if not now, when?