There were complaints when Subaru replaced the Impreza WRX sports saloon with a hot hatchback. But you would be wrong to dismiss this boxer
Share
Open gallery
Close
Share story

Thanks to the prowess and dexterity of rallying greats Colin McRae, Richard Burns and Petter Solberg, the Subaru Impreza WRX is widely upheld as one of the most competitive cars ever to compete in its field, vying for space in the WRC hall of fame with the Audi Quattro, Lancia Fulvia and, obviously, its long-time foe, the Mitsubishi Lancer Evolution.

Unfortunately, such hallowed status always becomes a curse for manufacturers when it comes time for a car’s reinvention, and so it was with a certain degree of shock and disdain that enthusiasts received the hatchback third-generation Impreza WRX in 2007. That change is no bad thing, you may think, but this was a moniker intrinsically linked with the world of saloon-shaped dirt-track destroyers, so we can forgive that bit of initial trepidation.

Today, the Mk3 Impreza WRX – which was built from 2008-2014 – is more widely recognised for what it is: a truly capable hot hatch rather than a bite-size sports saloon. As such, it might be considered an alternative to the FN2 Honda Civic Type R and Volkswagen Golf R32 – although, despite its similar shape and size, the Impreza WRX is a slightly less school-run-friendly proposition. 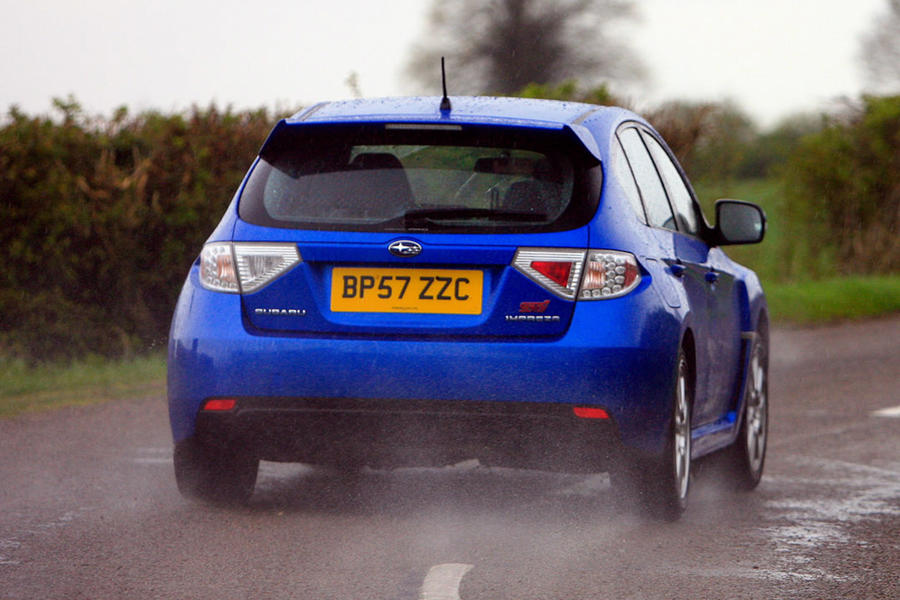 The Impreza WRX’s familiar and formidable ‘EJ255’ turbocharged 2.5-litre flat-four engine initially sent a rather piddling 227bhp and 236lb ft to all four of its wheels. However, the Prodrive-fettled S variant – launched in 2008 in response to criticism that the latest Impreza WRX wasn’t tough enough to take on its rivals – upped power to 251bhp and torque to 244lb ft for a 0-60mph time of 4.7sec (on most surfaces).

But if you simply must touch the 300bhp barrier (or get very close to it), you’ll want the STi (Subaru Technica International) variant, with its uprated ‘EJ257’ engine, which commands the big bucks.

Perhaps more obviously related to the snarling 555-adorned rally Imprezas of old, this 296bhp beast is quickly becoming a collector’s car, so prices are holding strong. That said, you’ll still find some that have been crashed, rally-prepped or tuned to within an inch of their life. It’s not a car to buy on a whim.

Don’t be sucked in by its flared arches, by its massive alloys or even (literally) by its whopping big turbo. The STi is a full-bore, four-wheel-drive performance car and should be purchased and treated as such. Find a good specialist, research parts prices and, above all, pay the extra for good-quality fuel. It will reward you for it. 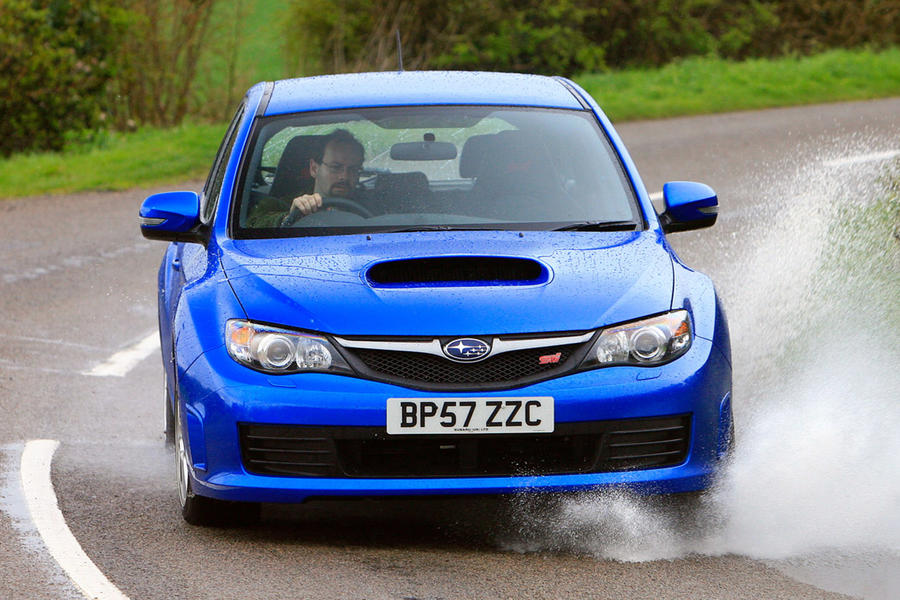 Andrew Wong: “My car was owned by Subaru UK and reviewed by the press; I bought it from a Subaru dealer afterwards. The hatchback isn’t a bad car. The Driver’s Control Centre Differential (DCCD) system is crazy – it allows no slip, even in heavy rain – and is a lot better than in previous models. The only downside is the 2.5-litre engine: having heard all those ‘chocolate piston’ stories, you always think it might blow up if you drive aggressively. I’m not sure exactly what my engine management light was related to, but the car is still active at the moment, so it probably wasn’t a major issue. I got £9000 for it in 2015, and it’s still worth £9000 today.”

■ Engine: Query any massive air filters, strut braces and aftermarket hose set-ups. Modifications aren’t always bad news if they’ve been carried out properly, but they can point to how the car has been driven. Watch for signs of ringland failure, which is when the piston cracks between the rings, letting gas underneath and causing pressure build-up in the sump. Low-octane fuel, hard driving and improper tuning are the primary causes. Turbo failure is a worry: look for smoke and boost loss. 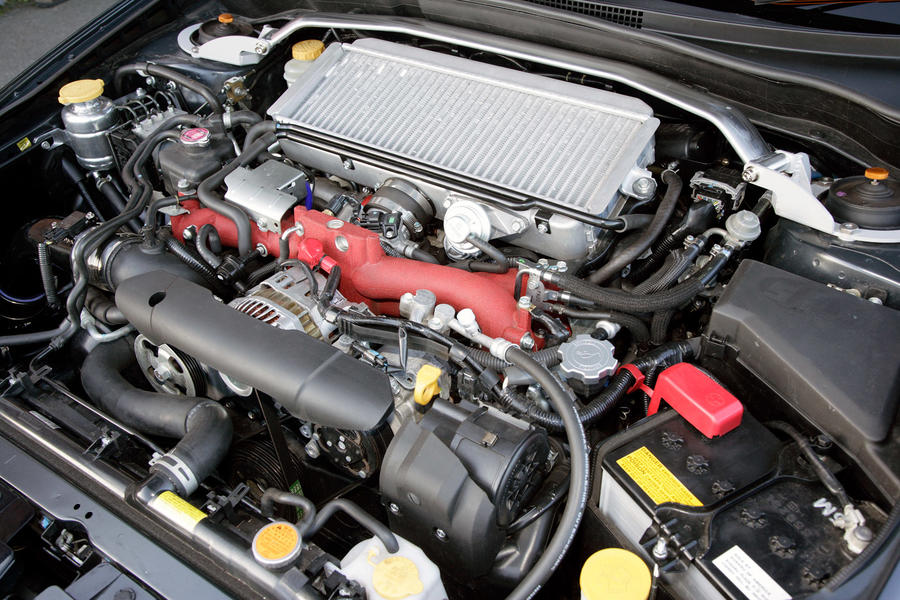 ■ Bodywork: Dubious bodykits and stickers can always be removed, but watch for rust bubbles underneath the vinyl on the B-pillar, because this can spread and write off the entire door. To be really thorough, remove the wheel-arch liners and underbody guards to make sure the rear of the chassis isn’t hiding any horrors. As with all performance cars, check the front chassis legs, sills and boot floor for evidence of past impacts.

■ Suspension: Worn droplinks are the primary cause of any untoward knocking noises, but they’re a relatively easy fix, so don’t let that put you off. Both anti-roll bars are secured with rubber bushes that perish over time, and if there’s any sign of a leak from the shock absorbers, they’ll need replacing. Budget around £400 for a decent aftermarket set.

■ Gearbox: Years of repeated hard launches will hurt the gearbox. Check each gear engages smoothly, with no crunching noises, and that the clutch has a well-defined biting point and returns as expected. If buying a used gearbox, be absolutely certain that it bears the same part number as your original one.

In Japan, the WRX STi took its 304bhp from a twin-scroll turbocharged 2.0-litre engine, so grey imports are better to drive and less likely to rust or fall victim to piston failure. Stick with the 2.5 if you covet that trademark boxer burble, though, as the JDM car’s engine note is slightly less imposing. 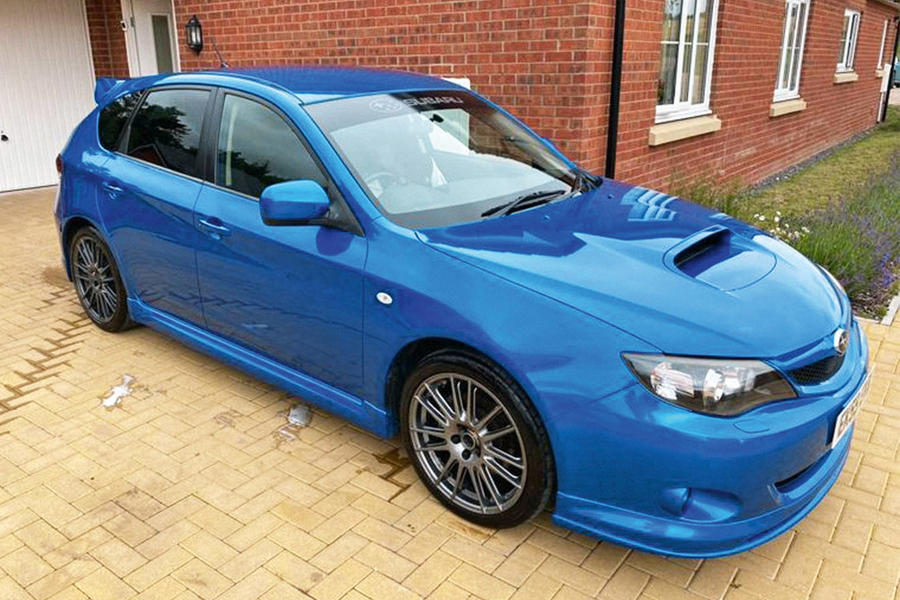 Subaru Impreza WRX S, 2009/59-reg, 46,500 miles, £7750: Not only is this minty WRX the more powerful S version, but it has also done just 4000 miles per year since it was new, hasn’t a mark on it and is priced to compete with much more pedestrian family-haulers of a similar vintage.

Saloons cars are for grown men. Hatchbacks are for spotty teenagers.

I can never take a bloke seriously that drives a hot hatch.

Hand brake in your leg.

Seated the hand brake digs in to your leg.   Driving the STi strange, no feeling at all through the exceptionally light steering wheel, yet it hangs on like a leech through the twisty stuff.   And yes, there's power.

It came as standard with naff looking wheels, and wanting another £2k for basic but decent ones.   Those then start to flake their coatings.

Subaru UK claimed there wasn't a saloon version, but there was in Japan.   Then when the saloon version did come to the UK they claimed you couldn't get it with the big spoiler and in the iconic WR Blue, yet again it was available in Japan.   Never before has a company destroyed their own sales like Subaru UK did!   Why?   They believed they were going up against VW and wanted to drop the rally reputation, the one that had got them so many sales and a foothold in the UK.