BACK TO ALL NEWS
Currently reading: One last blast: a goodbye drive in the Lotus Evora
UP NEXT
Why last-mile delivery EVs are big business for car and retail firms

One last blast: a goodbye drive in the Lotus Evora

The Evora is bowing out but there’s a timeless quality to its Lotus DNA that delights – and always will.
Open gallery
Close

It seemed a logical destination, just as it has surely done for Lotus lovers over many decades. I suppose if there’d been somewhere in the country called the Evora Valley we’d have headed there, but for the lack of such a place we chose the roads to and through the Elan Valley, central Wales, as the best place to savour the largest of the three outgoing Lotus E-models, the Lotus Evora, as it leaves production.

True, the name of this magnificent Welsh location never had any real connection with Lotus’s Elan: even the word itself is pronounced differently in central Powys than in Norfolk (the emphasis being on the first of its two syllables, not the second). Yet partly because of that mellifluous name, and even more because of the near-perfect driving roads that criss-cross the region, it seemed the place to go, both ideally and logically.

On Lotus pilgrimages I’ve made here in the past, the town of Rhayader has also been an important piece of the story. It’s in the epicentre of Wales, where the all-important, south-to-north A470 intersects traffic brought westwards by the equally busy A44. Rhayader bills itself as a kind of traveller’s rest, a place with a certain pioneering spirit, to which the humdrum aspects of ordinary life to the south and east don’t quite stretch. Call me sentimental, but I’ve always swallowed this whole, and associated this place with the continuing freedom of the road. 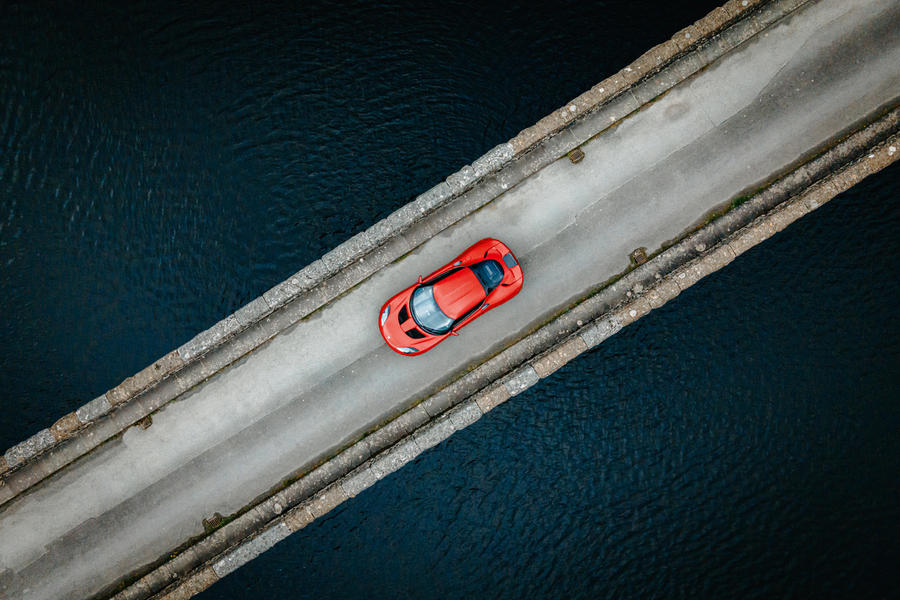 The first part of today’s mission was to meet photographer Max Edleston at 9am a few miles south-west of Rhayader on the B4518, close to the mighty dam across the magnificent Caban Coch reservoir, labelled in the guidebooks as ‘the reservoir of Wales’. This entailed a 100-mile journey from my home in the Cotswolds, predicted on Google Maps to take at least two and a half hours, so it was pitch black when I left home at six.

For various reasons that don’t have to bother us, I hadn’t even sat in this car before I approached it in the blackness of my backyard, groping with the key fob to open it and hoping to avoid setting off an alarm that would wake the neighbours. Various past Lotuses in my ownership have had problematic alarms, and this key was of a style I first encountered at the launch of the Ford Scorpio about 30 years ago, so I fervently hoped things had progressed – and they had. After a brief hunt for the starter button, I pressed it, the engine started without too much din, I snicked the big, high-mounted aluminium gearlever into first and we rolled away down the street almost quietly.

It’s probably 10 years since I’d taken a decent drive in an Evora, apart from a brief sojourn at a Lotus event at nearby Caffeine & Machine about a year ago. There’s nothing like darkness and deserted roads in an unfamiliar car to heighten your senses: this car felt instantly comfortable, obedient and easy to place on the road, but its demisting system and headlights were no longer anywhere near a modern standard, so I drove with caution, peering myopically through the semi-circular windscreen (that has always made me think irrationally of the Lancia Stratos) and letting time slip a little, knowing I could probably make it up later.

When the Evora was launched at the first London motor show to be held at the Excel Centre in east London, the most eye-catching feature was that it was a mid-engined 2+2, a format that had rarely been used before (although notably in the Bertone-designed Ferrari 308 GT4 more than 20 years earlier). It was meant to spread the appeal of Lotus beyond mere two-seat sports cars and justify a new name and a higher price. 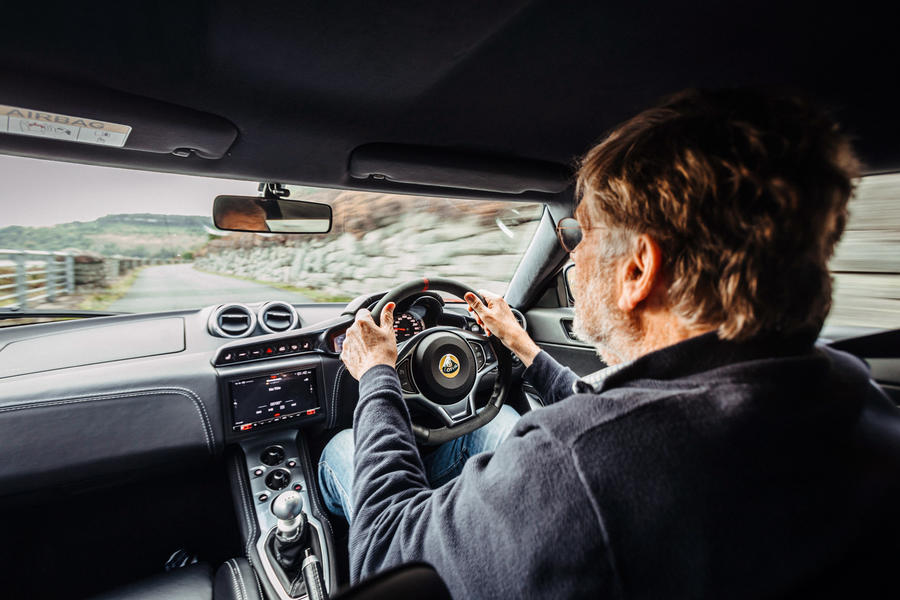 History says it didn’t, but other laudable properties – performance, handling, ride quality – soon took over as what mattered about the Evora. Leaving out the rear seats became a thing: Lotus came to offer a so-called Plus Zero option. Launched with a 276bhp Lotus-tuned normally aspirated version of Toyota’s 3.5-litre quad-cam V6, the car had a brilliant chassis from the start, its road ability distinguished by the fact that it had a relatively long, 2.6m wheelbase inside a surprisingly compact, 4.4m body. The weight of its (admittedly tall and heavy) transverse V6 was carried well inside the wheelbase and, of course, the bulk of Lotus’s engineering effort was dedicated to chassis development. One of the chief strengths of driving a Lotus is knowing that whatever extremes of driving you attempt with it, some company tester had been there before you.

The result of the Evora team’s efforts was a superb, driver-friendly machine with extremely high but well-defined cornering limits on track plus the kind of (hydraulically powered) steering that’s so perfect you often forget you’re using it. You ‘think’ the car into position. More to the point with the Evora – because Lotus’s similarly powered and smaller Lotus Elise and Lotus Exige were always going to take the ultimate track plaudits – was the way it displayed its ability as a GT, the smooth and torquey engine allowing its six-speed gearbox to effortlessly power it in tall cruising gears.

More power was soon added via a supercharging programme. A fairly lazy normally aspirated 276bhp soon became a more alert 350bhp, an output that focused the mind on track, promoting some lairy but deliciously controllable slides and pressed the theoretical top speed beyond 170mph. That supercharging programme ultimately led in further steps (often associated with scarily generous price rises) to 430bhp, although the GT410, our car for the day, was always deemed the everyman version, easy to drive and devoid of excessive aero add-ons, but quick enough in able hands to give all but the best McLaren and Ferraridrivers a decent run on track days. 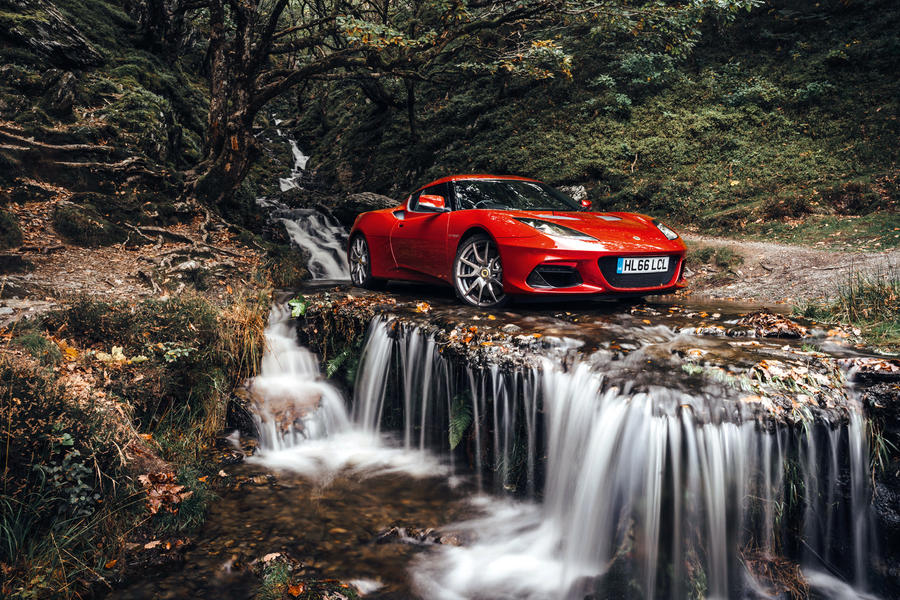 For a while in the 2020s, the Evora became an Autocar favourite, featuring with distinction at successive annual Handling Days, where potent cars pass through many hands over a short period and sure grip and accurate steering, with stirring performance, is an ideal recipe. It was also pleasantly easy to get into and out of compared with the Elise and Exige; its ‘developed’ bonded aluminium platform had originally been supposed to spawn three new models. But the ill-judged ‘2+2-ness’ that added 20cm of overall length and 100kg-plus to its weight (most versions topped 1400kg, although later special editions allegedly lowered that by 100kg or so) always made the Evora seem a bit of an odd fish.

Still, on the way to meet Max (up the A417 from home, onto the A438 to get me around Hereford as the sun came up, then a short sprint across to the A44, which took me westward into Rhayader) this seemed the perfect car for the job. Superbly accurate to steer, not especially wide and thus handy through villages, and flat-riding because of its long wheelbase and my centrally located driving position – a real, live Lotus. It was reassuring; reminding me why over the years I’ve owned eight cars bearing the famous ACBC badge.

Central Wales is no longer the place for completely abandoned driving, if it ever was. It has speed cameras, alert policemen and residents who don’t take kindly to the arrival of road hogs from the south. But it also has places where the road surfaces are downright beautiful, and where you can see the next five apexes of a deserted, sinuous road. So I admit to giving the Evora its head here and there, without anyone else as witness, out of harm’s way. Choose your time and you can still do that stuff. And the car, as I have always found with Lotuses, was my willing ally. Of course, there were niggles. Even this prime 66-plater was an old car compared with the twoseater peers like the latest Porsche 718 Cayman. 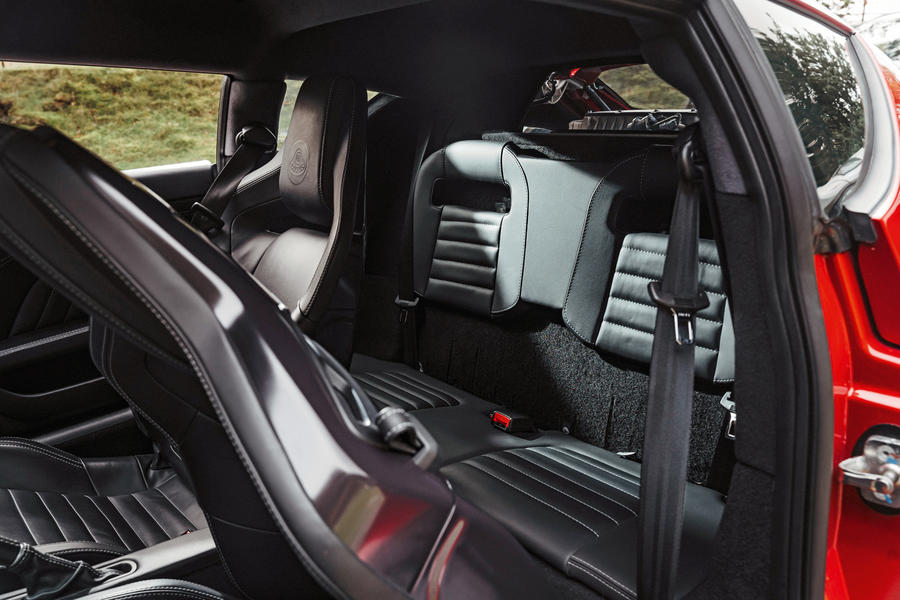 Its ‘supplier’ dash-mounted nav/audio system was a mile behind the game. The big aluminium gearlever was effective enough (quick but clunky) but nowadays it looks a bit like the work of a hobby home-machinist, sprouting from a stove-enamelled console. The interior of the new Emira seems generations more advanced. Quaintest of all was a foible I remember being pointed out back when the car was new, more than a decade ago. All hacks eventually get around to asking the same question: which were the hardest faults to chase away in this car? One engineer pointed soberly to a joint where the leading edge of the side glass rather awkwardly fits a kink in the window frame and explained how difficult it was to cure a noisy wind leak from that spot.

In our 13,000-mile test car, after all those years, the wind leak was still there – at least on the driver’s side, although admittedly the passenger’s door was much quieter. I couldn’t help thinking this was emblematic of Lotus in its pre-Geely days: if this had been a handling foible, it would have been chased away a decade earlier, never to return. Mind you, it wasn’t terribly noisy, and in this mostly excellent car, in such wonderful surroundings, it almost seemed like an old friend. 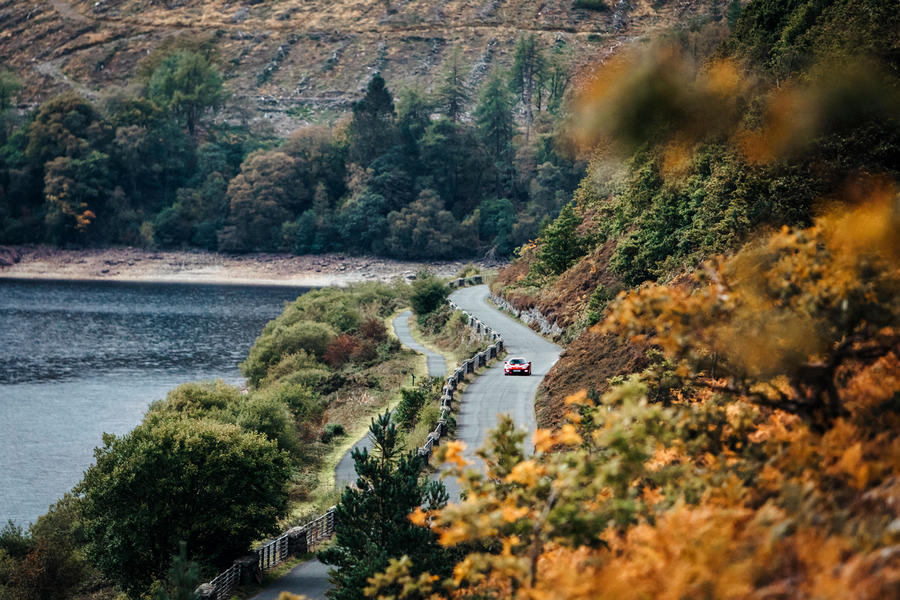 We drove and photographed all day, steering well clear of the venerable souls who populate the scenic spots of Britain in October after their grandkids have gone back at school. I learned the Lotus better and better, so that when the time came to go home (this time part-way on the A470, because I’ve always loved that road, too) it felt as if we were old friends, wind leak and all. Back at base after 14 hours away, having put 300 varied miles under the Lotus’s wheels, I realised I’d not bothered to operate the radio once, instinctively preferring the powerful but rather refined sound of the V6 behind (most of the time you wouldn’t know it was supercharged but for the fact that the ‘puffer’ is visible through the rear window) to other entertainment. For me, this car’s distinction was and always will be its chassis.

However long it lives and whatever rivals come along, the Evora will always be one of the stablest, best-driving cars on the road. I know that now.

Log in or register to post comments
si73 7 November 2021
@artill, I've always liked the Evora's looks, never driven or owned a lotus as they're beyond my means, but an Evora was always a what if? car for me, unfortunately nothing ever came along to make one mine.
artill 6 November 2021

The Evora was never a good looking car. The replacement for it is much better. I am sure it drives wonderfully, but i am sure there is a reson no one else makes a 4 seater small mid engined car.

However the photography in the article is some of the best i have seen on Autocar. Well done!

This article confirms what I already knew: Lotuses are great cars to drive, less so to own.  I have fond memories of earlier models but sadly I don't want to own another. Perhaps the Emira will be different?