BACK TO ALL NEWS
Currently reading: Used car buying guide: Triumph Stag
UP NEXT
Autocar magazine 3 March - on sale now

Michelotti styling: tick. James Bond cameo: tick. Things were looking up for Triumph’s four-seat convertible when it was launched in 1970. And then rumours began to circulate about its bespoke but unreliable 3.0-litre V8 engine.

Cooling problems, an under-sized water pump located in the wrong place, head gasket and timing chain failures, warped cylinder heads, internal casting sand deposits… Just a few of the issues that plagued it then, to which, today, you can add rust – lots of it. That so many survive (around 8000 in the UK) is testament to the Stag’s enduring appeal. Triumph from adversity you might say, if you enjoy a bad pun.

What’s to like? Those looks, for a start, and that bellowy V8. It’s a genuinely roomy car and practical, too. There’s a supportive owners’ club and an active spares and repairs scene. To cap it all, it’s the Stag’s 50th anniversary this year so expect to encounter convoys of the things in the summer, perhaps on their way to the Stag Owners Club’s main birthday event at the Silverstone Classic on 2 August. 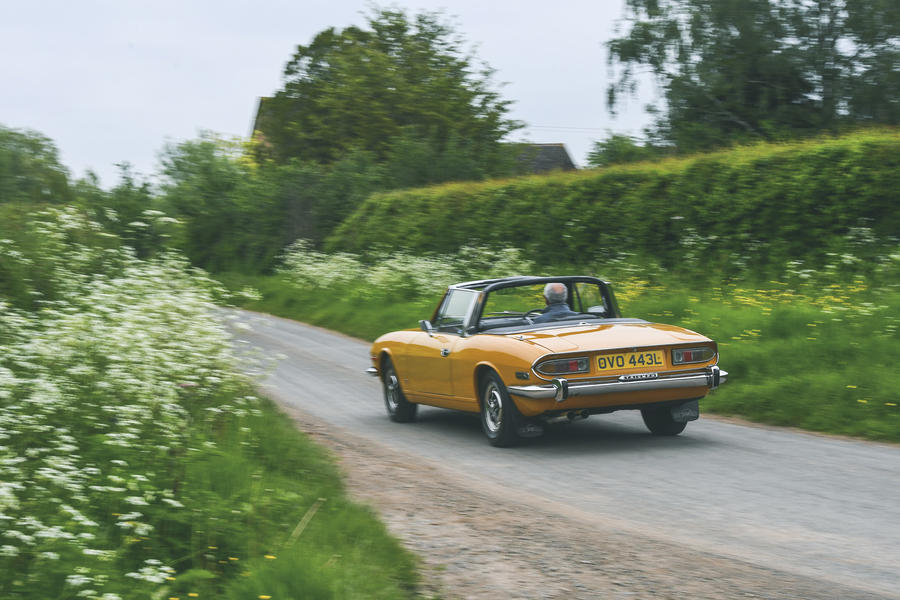 So the Stag is very much alive and kicking and more so because many of the better cars – prices for these start at around £10,000 – have been overhauled and fitted with modern parts. Their owners are enthusiasts who know how to care for them, too.

At its simplest, this means they use the correct coolant with anticorrosion inhibitor, whereas when the car was launched, owners and even garages didn’t know to. As a result, the alloy head and iron block didn’t rub along too well and before long the radiator started to fill with gunk, causing the engine to overheat and the head gasket to go south.

For these and other reasons, you’ll find a few Stags have had their original 3.0-litre V8 replaced with a Triumph 2.5, Rover V8 (it’s too heavy and spoils the car’s balance) or Ford V6. You’re better off finding one with the real thing but properly refurbished and fitted with an electric cooling fan and electronic ignition.

The 3.0-litre V8 produces 145bhp and 170lb ft of torque. It was fitted as standard with a four-speed manual gearbox with overdrive. Today, this is the most sought-after variant. A three-speed BorgWarner auto was optional but may at some time have been swapped for a better four-speed ZF unit. Suspension was independent all round, brakes and steering were servo assisted, the windows were electrically powered and it had a rollover hoop (for stiffening purposes more than anything). So the Stag was technically advanced, as it had to be if it was going to compete with cars such as the Mercedes-Benz SL.

A Mk2 version was launched in 1973 with a few visual tweaks that needn’t detain us here and a higher engine compression. Sales picked up but soon fell back and the plug was pulled in 1977. No matter: today, a well-sorted Stag is a seductive classic that will put a smile, rather than a frown, on your face. 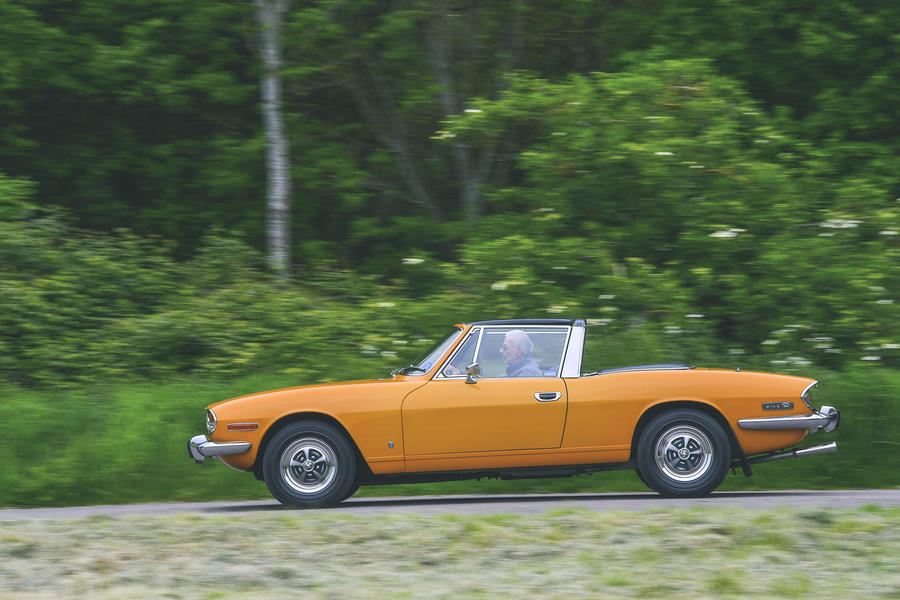 Kevin Fathers, founder, Faversham Classics: “A good Stag can hold its own in modern traffic, plus it’ll seat four comfortably and carry their luggage. The exhaust note is like no other. Cynics say it distracts you from the car’s poor performance but the Stag is a GT that will happily cruise all day at the legal maximum. Prices have been rising in recent years so that decent ones start at £10,000. The Stag has a reputation for unreliability that dates from when it was new but today many have been fitted with more reliable parts. For example, modern head gaskets are made from much better materials and don’t give any trouble.”

■ Engine: If the engine has been overhauled or replaced, check who did it. Assuming it’s the original Triumph unit, while it’s cold check there’s coolant at the top of the radiator. Now start the engine. If it hasn’t been fired up for some time, the starter motor solenoid or fuel pump can play up. Listen for the timing chains rattling before the hydraulic tensioner takes up the slack. It needs new chains every 30,000 miles. Check the whole radiator is warming up. On the test drive, watch the temperature and oil pressure. On return, look for oil leaks and ensure the fan works.

■ Transmission: Make sure overdrive works on third and fourth gears. The clutch may feel heavy (it can be corrected) and second-gear synchro can wear.

■ Suspension: See if the driveshafts have been upgraded to prevent the locking problem that causes the car to lurch in corners when you lift off. If you can shake the wheels when braked, suspect failing bushes.

■ Electrics: Okay but can suffer from a bad earth, often traced to a rear bulb holder.

■ Interior: If the seat foam looks like a mouse has eaten it, it needs replacing. Check the condition of the dashboard veneer. Also worth knowing The Stag Owners Club is a good place to begin your relationship with the model. Stag history, cars for sale, parts suppliers and workshops – it’s all here. There’s even an owners tooling fund to ensure parts can still be produced. 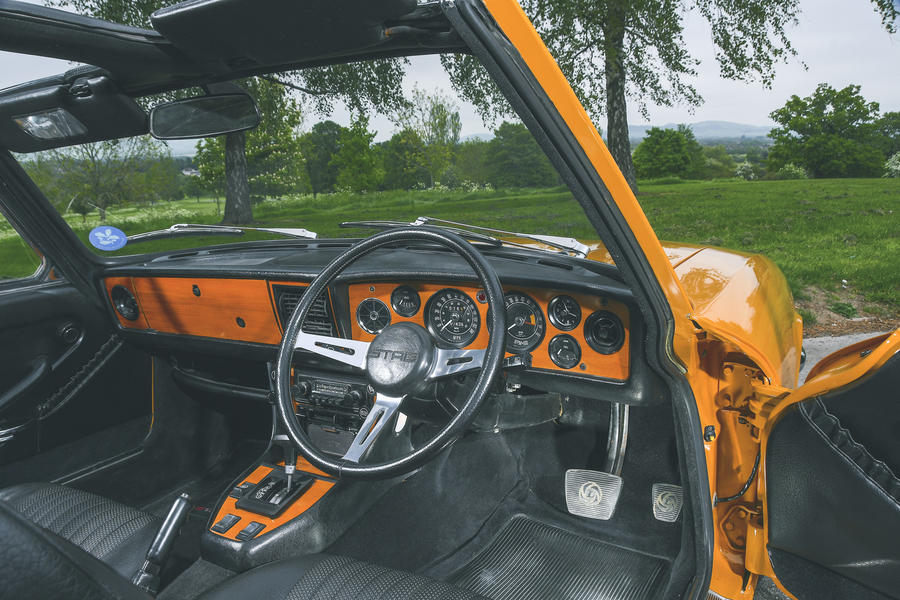 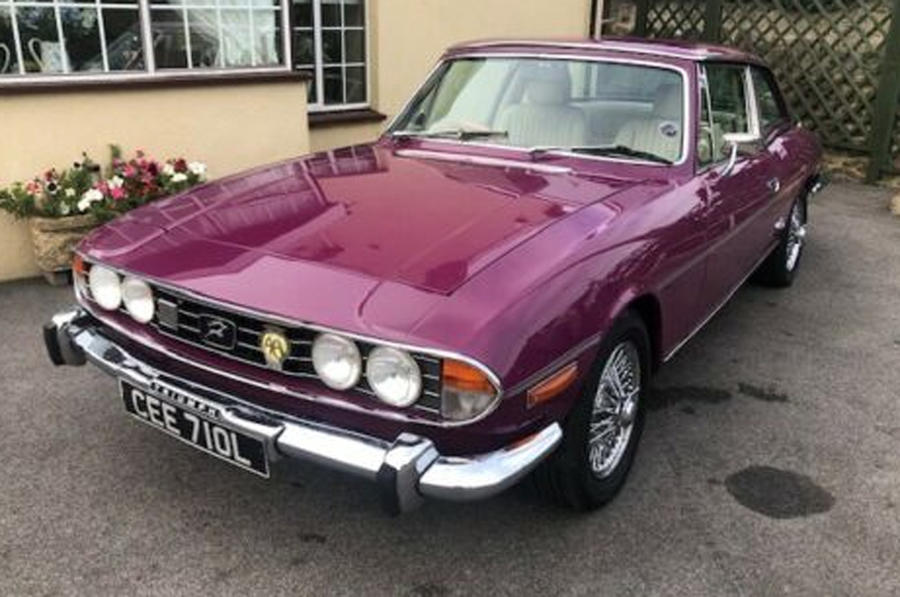 Triumph Stag Mk2 3.0, 1973-reg, 48,000 miles, £12,000: “Whoever buys this car will not be disappointed,” claims the private seller. It certainly sounds good: no rust, unmarked interior, smooth gearbox, original V8 in “excellent” condition, full rear seatbelts. Too good to be true?

Our favourite video of 2019: Ariel Nomad vs Triumph Scrambler​

(According to aronline) Rover joined Triumph in the same group fairly late in the Stag's development programme (by which time the Triumph V8 design was maturing) and certain personnel incorrectly claimed that the Rover V8 would not fit but also there was insufficient planned production capacity at the time to suit both Rover/Land Rover and Triumph. The originally planned straight six engine option was canned and there was a desire to launch the Stag (design started in 1966) without further delays.

So let me get this right,

So let me get this right, john, youre saying that the all alloy Rover/Buick V8 is heavier than the iron blocked/alloy headed Triumph V8 ?

Could be more about weight

Could be more about weight distribution as opposed to weight itself. I know that British Leyland subsidiaries would often bite their own nose off to spite their face! Why Triumph didn't go with the ubiquitous 3.5 V8 is beyond me! Honestly, I'd rather have a nice Rover P6 or P5C.
289 17 February 2020

Yes, I spotted that too....actually the Rover engine is nearly 100 pounds lighter.