BACK TO ALL NEWS
Currently reading: Used car buying guide: DeLorean DMC-12
UP NEXT
Hidden gems: A peak behind the scenes at Beaulieu

Everybody knows the DeLorean DMC-12 as the car from Back to the Future, but this UK-built sports coupé appeals for reasons other than its film fame
Open gallery
Close

Stainless-steel body panels, tough mechanicals, many rust-free low-mileage examples and fast-improving parts supply: a DeLorean DMC-12 makes a promising classic car purchase. And if you’re tempted, don’t hesitate: against the backdrop of rising values for desirable old motors, this year’s 40th anniversary DeLorean celebrations (the first cars rolled off the Belfast production line in early 1981) are sure to burnish the DMC-12’s reputation with a consequent impact on prices.

Only last month, a 1982-registered example in good condition and with 61,000 miles that was estimated to make between £26,000 and £35,000 at auction eventually went for £42,750. That’s an impressive result but one that was achieved when, from £39,000, only two bidders remained, each trumping the other in £250 increments. A desire to win at all costs? It’s always a risk with auctions, so let’s just hope the victor is pleased with their DMC-12.

They ought to be. If nothing else, the story behind the model is like something out of Hollywood. Dashing and brilliant General Motors executive John DeLorean quits to realise his dream of building an ‘ethical’ two-seat sports car: one that will be safe, durable and sustainable, albeit with a mid-mounted V6, gullwing doors and a stainless-steel body. He recruits Giorgetto Giugiaro to style it and Lotus’s Colin Chapman to engineer its chassis and suspension. He persuades the UK government, desperate to create jobs in a divided Northern Ireland, to pour millions into the project. But complaints quickly surface about the car’s poor build quality and performance, and a new administration opposed to private sector support is elected. Within months, DeLorean’s dream is shattered, the final nail in the coffin his arrest on drug charges when caught trying to raise enough cash to keep the company afloat. 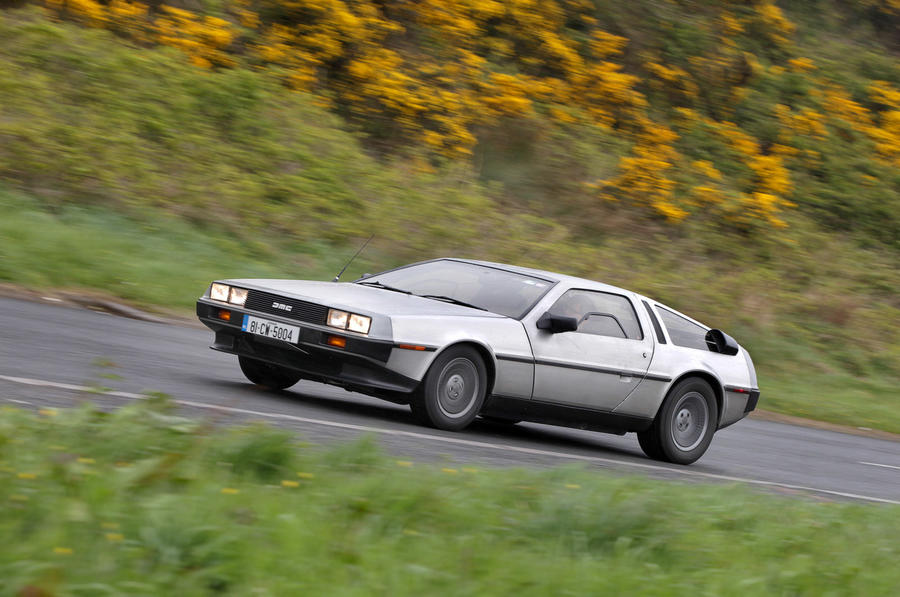 And there, but for all the legal and financial complications that followed, the story ends. Except that, happily, DeLorean’s dream lives on in the form of thousands of extant DMC-12s. More than 9000 were made, although of the roughly 6500 remaining, most are in the US.

There are parts suppliers, too. The original factory parts were bought by a supplier in Texas, but here in Norfolk we have DeLorean Go, the world’s second-largest supplier of parts for the DMC-12. And, of course, there are the owners clubs; deloreanclub.uk and deloreans.co.uk.

These serve the 350-400 DMC-12s on UK roads, all of them imported at one time or other. These cars change hands from time to time, but you have to be quick when they come onto the market. All DMC-12s left the factory in left-hand drive, but a tiny few have been converted into right-hookers.

Gearboxes are split 70:30 five-speed manual and three-speed automatic. The engine is a 2.8-litre V6 that makes a paltry 130bhp, so don’t expect fireworks. Instead, if you can bag a DMC-12 for £30,000 (or even £42,750), expect to attract the kind of attention usually reserved for hypercars costing 50 times as much.

Alistair Vanstone, The DeLorean Club (UK): “I had wanted a DeLorean ever since I sat in one as a boy and bought my first in 2002. I had to go to Belfast to get it, which somehow seemed right. I bought my second in 2006 and my third in 2013. Both were project cars in need of restoration, from a batch of 50 that were exported to the Middle East. I bought my fourth with a friend as another project. I love the car’s styling and the story behind it. It’s underrated by experts, but when people see one on the road, they always smile. Now is a great time to buy. Parts in particular are plentiful and easy to source.”

■ Engine: Lumpy idling and poor running may be due to a tired K-Jetronic fuel injection system. The engine should have no trouble starting from hot or cold and settling to a steady idle. Oil leaks can often be traced to the crankshaft rear seal (it’s a gearbox-out job to replace). Check the original fuel lines have been replaced with braided items and that the plastic coolant header tank has been renewed (the orginal develops cracks). Examine the base of the water pump for coolant leaks. Replace the radiator with a more efficient unit.

■ Chassis and body: Inspect the glassfibre tub for cracks and the steel chassis for the epoxy coating flaking off, allowing corrosion to take hold. Look for rust behind the fuel tank. Doors that don’t open or close properly can wear the roof box, causing corrosion. If they bounce at the top on opening, they will damage the gas strut mountings. Body dents can be repaired by specialist PJ Grady.

■ Transmission: Check the gearbox driveshaft seals for leaks and that the original plastic fluid line has been replaced with a braided item. Make sure you can select second gear (the roll pins are known to bend). 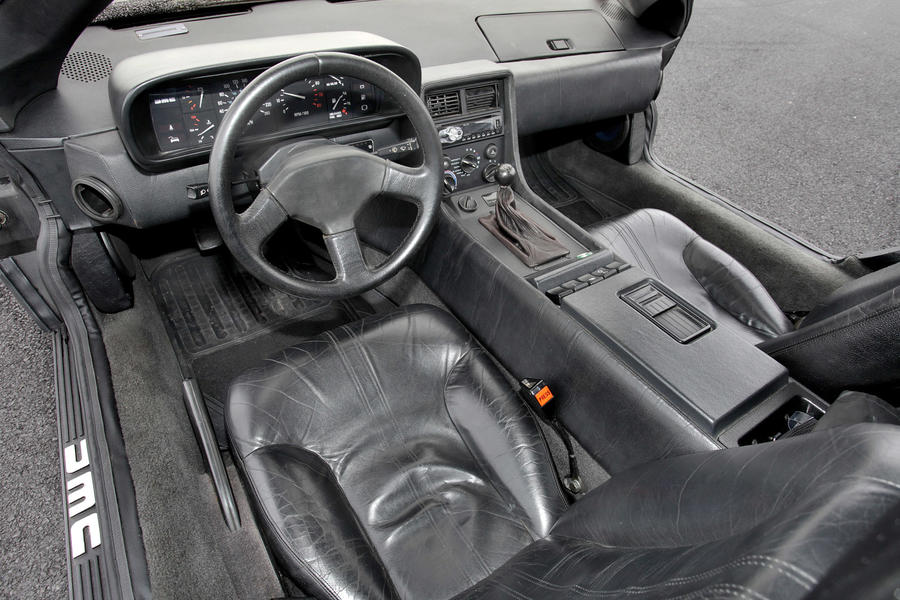 ■ Electrics: Ensure all connections are clean and rust-free. Ditto the fuses (behind the passenger seat). Check the mirrors, doors and central locking work.

■ Suspension and brakes: Check the troublesome handbrake and the condition of the front-lower balljoints and control arms. Check the steering for looseness. US cars sit quite high, but you can lower them by fitting Euro springs and Spax shocks.

■ Interior: Examine the dashboard for heat cracks (they’re fixable). The air-con system will probably need to be upgraded in order to accept today’s refrigerant.

If you can’t wait for a UK-registered DMC-12 to come up for sale, consider importing one from the US. Check its build history at citizenkidd.com and its provenance with Carfax and pay using escrow. Get a certificate of title and a bill of sale. Declaring it as having been built in the UK will qualify it for 0% import duty. VAT is calculated at 5% of its value. For it to be road-legal, you must convert the headlights, fit a rear foglight and prepare it for an MOT test. 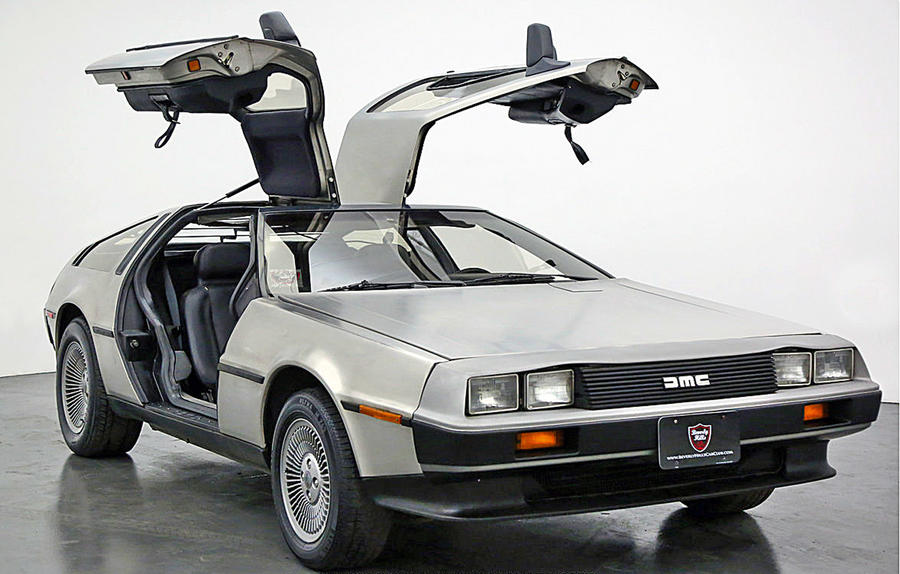 DeLorean DMC-12, 1981, £22,000: This Los Angeles-based car, which has done 58,000 miles, is advertised by a dealer. It has a clean bill of health from Carfax. The interior looks tired and the body hardly perfect, so it’s very much a project. Ship Overseas quoted £1300 to collect and ship it to Southampton.

Back in time: Remembering the DeLorean DMC-12

DeLorean DMC-12 to go back into production

The finest cars with gullwing doors

Why do we like cars?, nobody has the right answer, we just do, we are prepared to put up with the little niggle faults than turn up on a regular basis, some people, as said buy them as a project car, something to do like a hobby almost, join owners clubs who are like minded, when the firms came out this was a futuristic car, the same with the Pontiac in the Tv series "Night rider" , Dodge Charger in the "Dikes of hazard", these were all cars which for blokes of a certain age now drooled over, the DeLorean was one mans dream, and he got them made, yes, it had a gutless engine, wasn't built all that well, but most were bought because of the films, and, and I'm not sure about this, it's the only car that all the parts are available, from bolts n screws to body panels which are original old stock, so, like I said, why do we like old cars?, maybe that's why?

I dont get what people see in these old dogs.

Awful design, stainless steel finish always looks tired (did when new too). Crappy, wheezy old Renault engine, and poor build quality - all financed by us (the tax payer), at the time for a bunch of crooks.

I get the feeling that if it hadnt been in a film no one would even have remembered it.

si73 1 March 2021
Such great looking cars, what is the glass fibre tub? Often when the term tub is used it's in the context the main structure of the car, as in a carbon fibre tub, yet this has a steel chassis and a stainless body.