BACK TO ALL NEWS
Currently reading: Buy them before we do: second-hand picks for 2 July
UP NEXT
Polestar prioritises sporting character for new 3 SUV

Buy them before we do: second-hand picks for 2 July

With offices soon to reopen and long daily commutes back on the agenda, what we need is a comfortable, practical motorway runner
Share
Open gallery
Close
Share story

With offices soon to reopen and long daily commutes back on the agenda, what we need is a comfortable, practical motorway runner, right? Right. But there’s no reason why we can’t add a bit of panache and performance potential into the bargain.

Step forward the Mk1 Jaguar XF Sportbrake. At launch back in 2008, the XF saloon quickly marked itself out as a front runner in the executive segment, and in 2012 the Sportbrake estate bolstered its already agreeable levels of practicality, thanks to an extended roofline and a loading capacity of up to 550 litres.

An early XF Sportbrake can be picked up today for as little as £8000, with a choice of four-cylinder and V6 diesel engines to choose from, each with an eight-speed automatic gearbox. Unlike with the saloon, there were no petrol options. Sacrilege, we know.

It’s possible to hit up to 55.4mpg with the smallest available motor, a 161bhp 2.2-litre diesel, and this is the most common on the used market.

If you want a little more poke, you can opt for the 197bhp four-pot, which is good for 0-62mph in 8.2sec, or even make the jump up to the range-topping 3.0-litre V6 in 237bhp or 271bhp form. Just beware their substantially hiked VED rates.

Most used examples are now long in the tooth from years of motorway driving, school runs and more, so the one-owner 197bhp 2.2-litre example from 2014 that we found with 98,000 miles on the clock is something of a rare gem at £9995.

This car has a full service history and a host of optional extras thrown in, plus you will pay only around £155 in annual road tax and benefit from that favourable fuel economy. 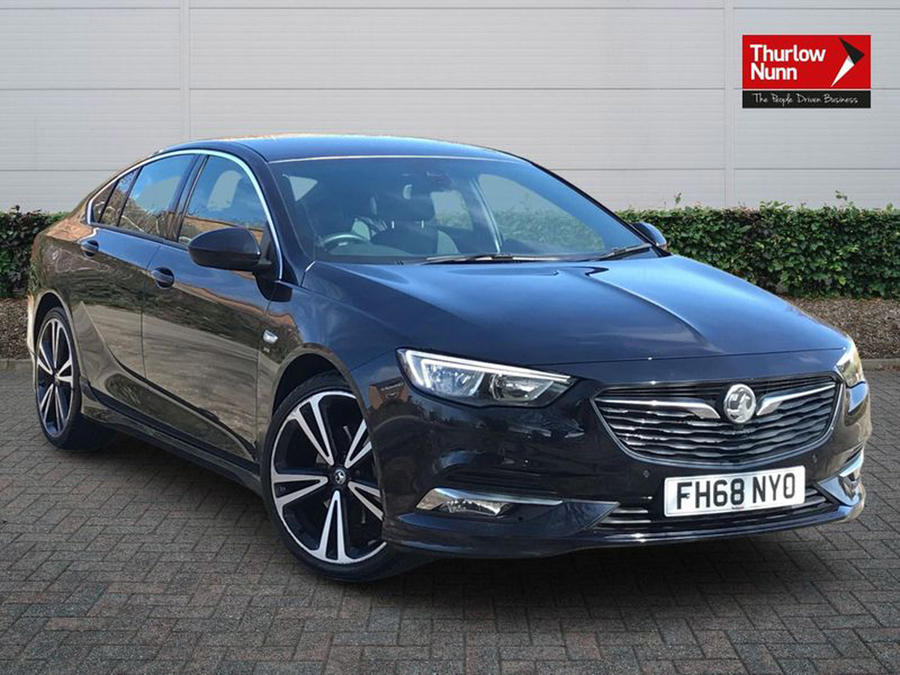 Vauxhall Insignia Grand Sport 2.0 TD SRi VX-Line Nav, £13,999: The Insignia fastback is unassuming but versatile. This 2019 example has a 2.0-litre turbo diesel and is packed with some great gear, including satnav, dual-zone climate control and, unlike the older XF, Apple CarPlay. It’s a steal after just 30,000 miles. 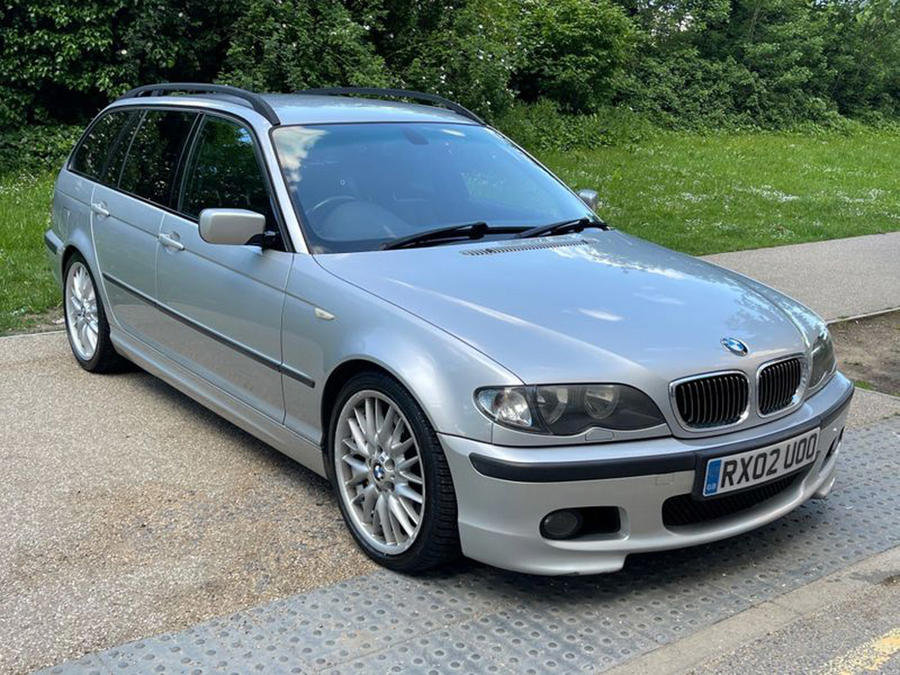 BMW 330i Touring £1995: This E46-generation 3 Series estate features a 231bhp 3.0-litre petrol straight six. It should hit 62mph in 7.2sec (great for motorway slip roads) while you get to enjoy premium styling and technology that belies its shockingly low price. 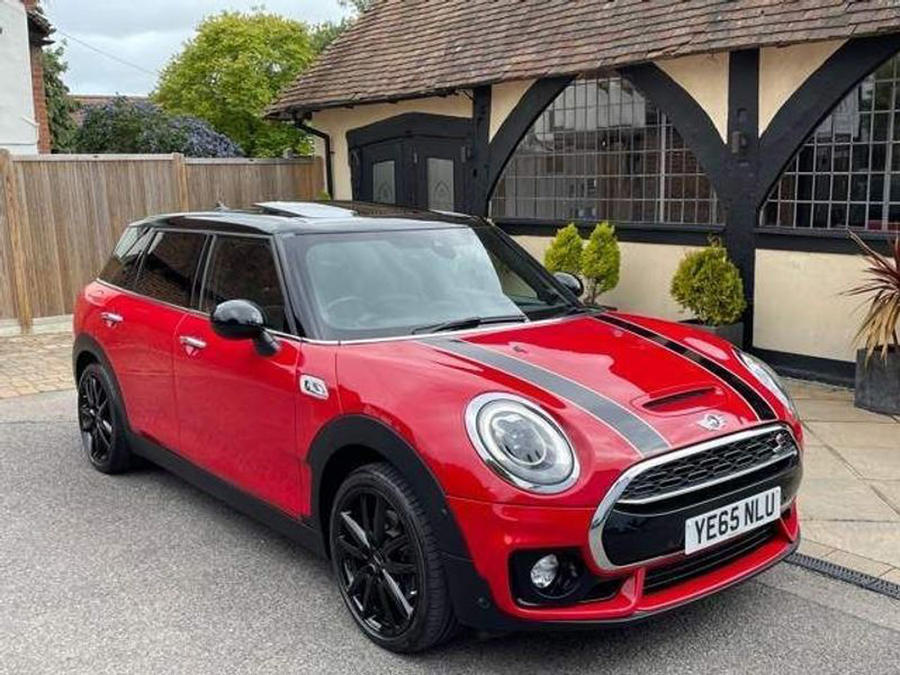 Mini Clubman Cooper S auto £10,995: With 189bhp from its 2.0-litre turbo, this quirky wagon can crack 0-62mph in 7.1sec. It has done 93,000 miles and features every option you could want, including the coveted Chili pack with its head-up display, 19in alloys, cruise control and heated seats. 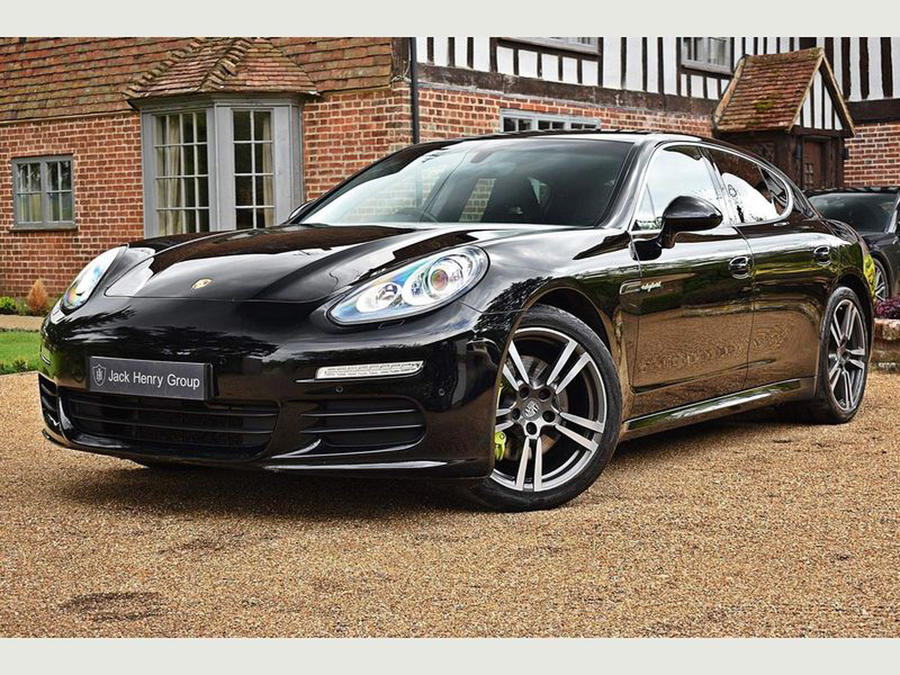 Porsche Panamera 3.0 V6 S E-Hybrid £33,495: Okay, it’s a Porsche, but it’s also a PHEV that can run for 15 miles as an EV, so it’s hardly the unhinged commuting choice it might seem. This 2016 car has a Bose stereo, parking aids and a reversing camera, all for a quarter of its original price. 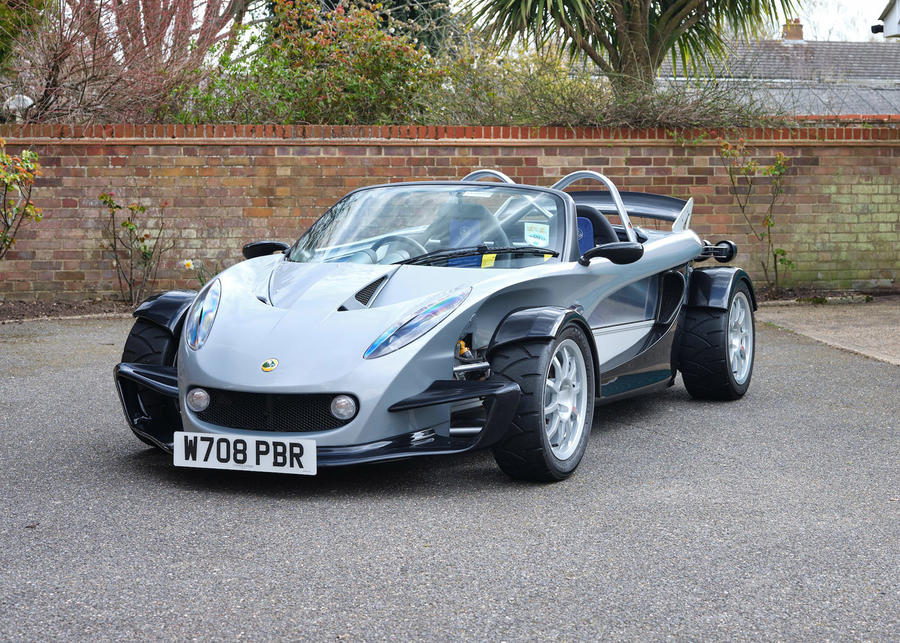 Lotus 340R: One of only 340 examples produced, this Lotus 340R has covered just 5856 miles in 21 years on the road. It’s essentially a special-edition Type 111 Elise with a custom body, so it’s fitted with Rover’s 1.8-litre K-series inline four, which is good for 177bhp. It sold for £58,000 at auction, thanks to its extremely low mileage and well-kept exterior. Other examples on the auction market are hovering around the £50,000 mark or lower. As a proper collector’s item with such low production numbers, you will be hard-pressed to find one with more than 10,000 miles on the dial. 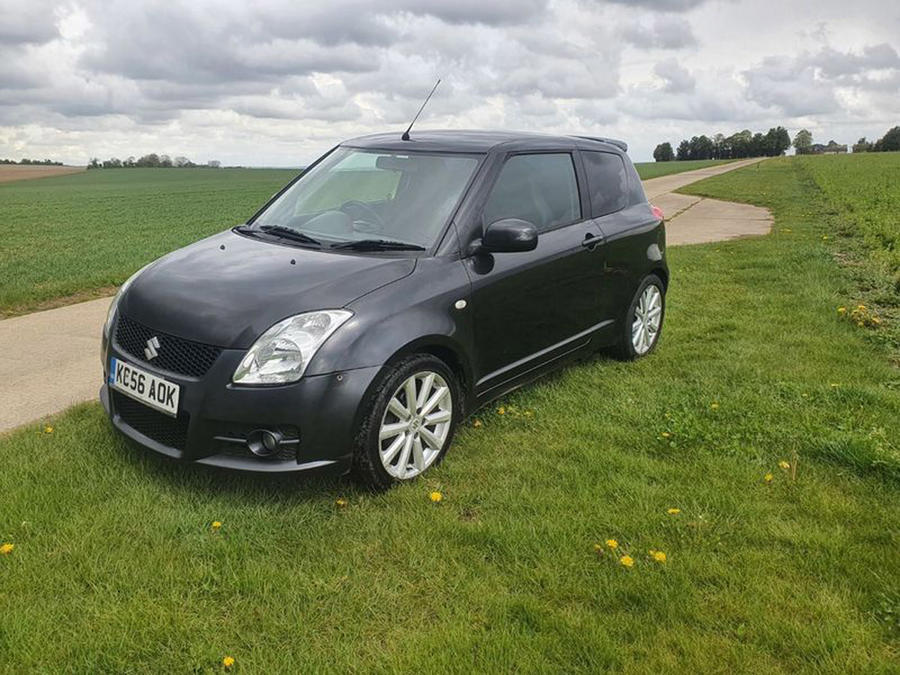 Suzuki Swift Sport £1450: As big, heavy and increasingly electric SUVs dominate the market, there’s a growing sense of nostalgia for whizzy little honest runarounds that can cheaply and effectively enliven your Saturday-morning errand runs. The 2005 revival of the Suzuki Swift brought with it the jazzed-up Swift Sport, with its punchy 1.6-litre atmo petrol engine good for an agreeable 123bhp. It holds up well when thrown into corners, thanks to its well-put-together chassis, and in years to come will serve as a reminder of how much fun a nippy little hatchback could be. 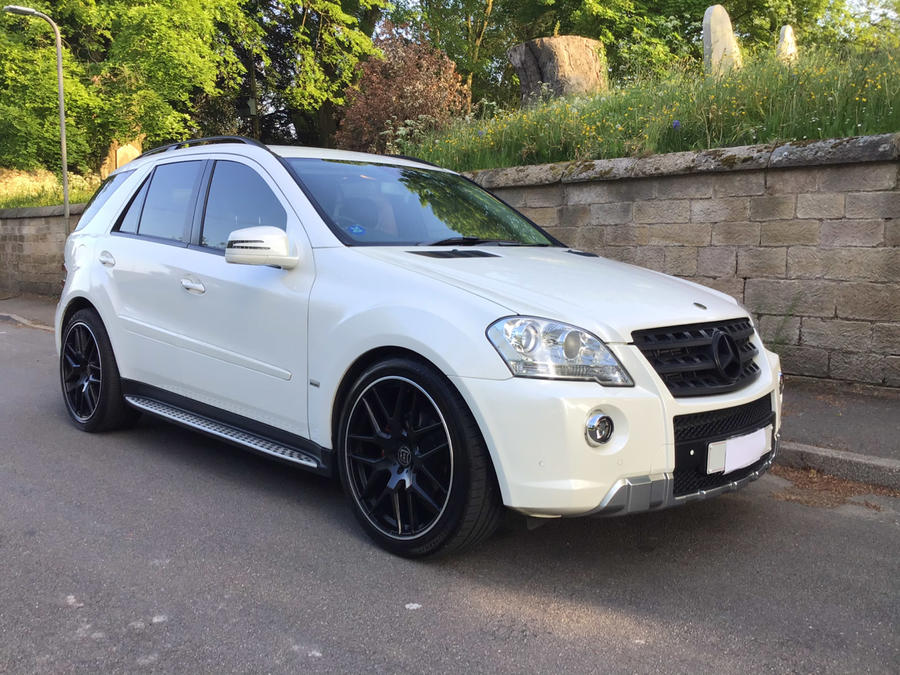 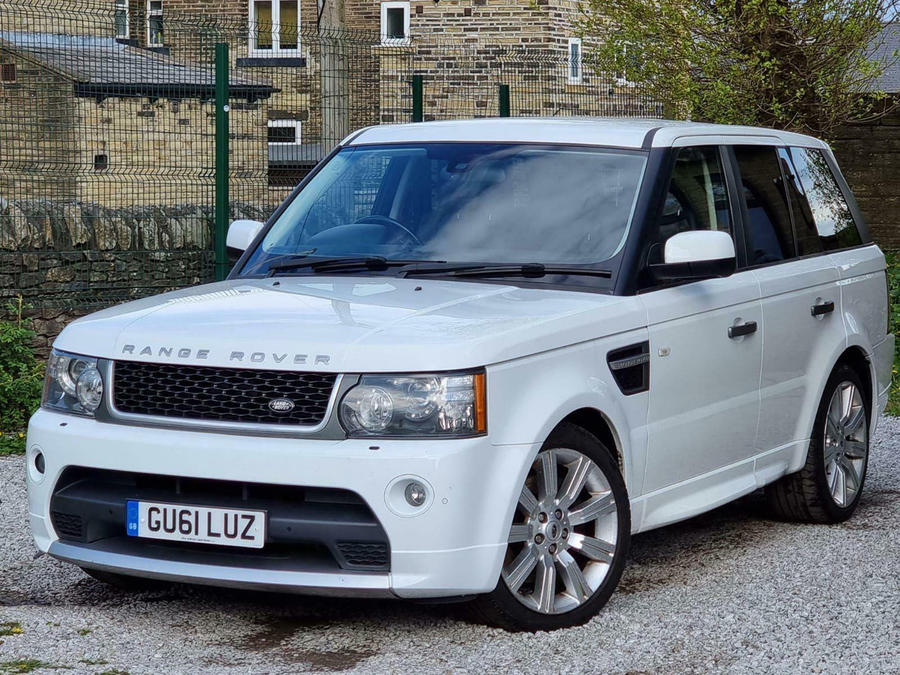 Jack Warrick: My massive Mercedes is the perfect camping all-rounder. It has four-wheel drive for those muddy campsites, enough Brabus brutality under its bonnet to startle a whole Cornish village and roof bars for when James fancies a spot of kayaking. Heated seats to dry off the mizzle, too.

Felix Page: Where do you go camping, the Old Trafford car park? It’s much more Premier League than Preston Sands, that Brabus, whereas my Range Rover Sport stays honest, with its original trim and wheel paint. Plus, it’s fitted with every option under the sun and has covered fewer than 100,000 miles.

JW: As if Range Rovers aren’t the car of choice for professional footballers! With my Mercedes, James will have enough cash left over to buy Cornish pasties and ice cream for his entire family. With your Rangie, no doubt he will be spending all of his spare change on diesel and breakdown recovery fees.

FP: Au contraire, my fellow happy camper. Mine is a one-owner car with a full service history, and I bet James would like the idea of cruising at 30mpg (when the caravan is at home, admittedly).

JW: Regardless of it having had only one owner, my ML has been driven almost 30,000 miles less and is capable of 32mpg. That’s one extra trip to the gift shop with a spare few quid.

FP: Perhaps James could look for some tasteful wheels and a silver grille among the postcards and coasters while he’s there.

Have you ever seen un Land rover en Le Motorway, or un 4x4 picK up trucK ?

Sorry Jonboy....I couldnt let you peddle such a blatant untrouth.

The W164 ML as shown here was not the poorly built ML.... that was the previous W163, although I ran just over a quarter of a million miles in one with nothing other than serviceable items to replace. Even the exhaust was original!

Agree on the Suzuki. We got a cheap (because of some minor body damage) 1.2 Swift for my son to learn on. OK, it's not as quick as the Sport, but it's great to drive in the twisties and even the 1.2 has a nice note, with well-weighted controls.