BACK TO ALL NEWS
Currently reading: Nearly new buying guide: Volkswagen Golf R
UP NEXT
Bentley to launch five electric cars in five years from 2025

'Iconic' is overused in motoring journalism. But for describing the Golf? There's no other word
Open gallery
Close

Perhaps the most surprising thing about the Golf R was how quickly it began appearing on the roads in serious numbers following its launch in 2014. Of course, the cheapest version, the three-door manual, cost only around £4000 more than the cheapest GTI (£30,000 compared with £26,000) and, remember, this is the age of the PCP when such differences translate to only a few extra pounds on the monthly payment. But VW was also pushing the new model hard with incentives.

There are manuals and threedoors in the mix but the vast majority are five-door automatics (sevenspeed DSG). Owing to its relative scarcity and particular appeal, the three-door is, like for like, more expensive than the five-door, but a cast-iron service history and unblemished condition are essential.

Click here to buy your next used Golf R from Autocar

Supply-wise, auto and manual versions of the three-door are split 50/50 whereas, unsurprisingly given its broader reach, five-door Rs are predominantly automatic. If you’re tempted by the three-door’s sportier looks, be aware that access to the back seats is, naturally, trickier – a fact that, over time, may come to bother you more than it does now. 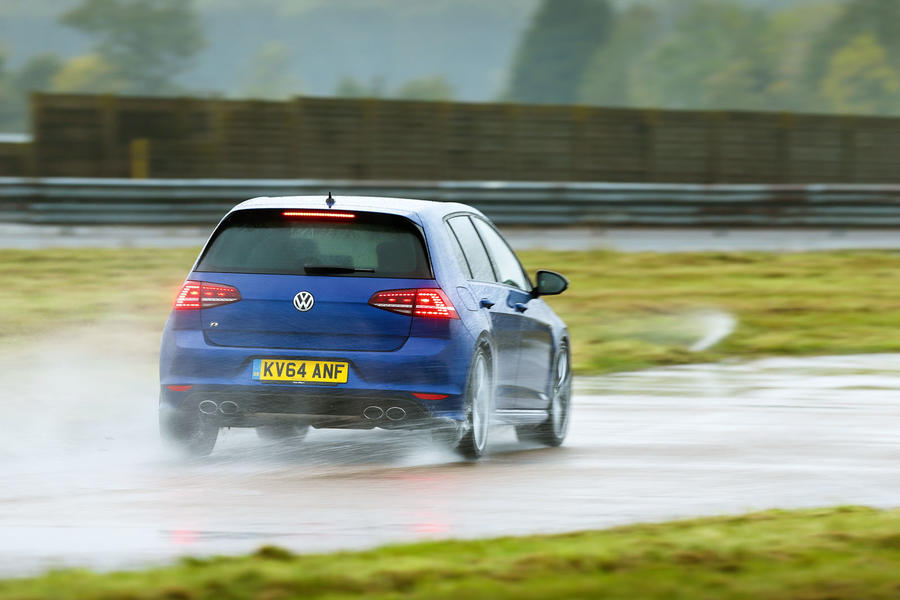 Colour is critical. It’s subjective but many think the R looks best in blue, which, happily, is the most plentiful colour. On later cars, Turmeric Yellow (it looks like gold) divides opinion and is rare but worth considering if you’ve an eye on future resale. Black and white are safe as houses and play to the R’s Q-car character.

With so many used Rs to choose from, the right options help a car to stand out. Among the more desirable ones is Adaptive Chassis Control (ACC), which offers Comfort, Normal and Race modes. Despite its name, Comfort still feels quite brittle but that’s the price you pay for the R’s sharp responses.

Other choice options include leather, climate windscreen, uprated Dynaudio system – at full whack, it will loosen your fillings – and panoramic sunroof. The optional 19in Pretoria alloys are sought after but check their condition first. The standard-fit sound actuator that enhances the engine note is good but, in 2017, VW made a sports exhaust package available for £2975.

Desirable though all these options are, don’t let the right car slip through your fingers for want of a few goodies since the R is already well specced in standard trim, with sports suspension, four-wheel drive, 18in alloys and xenon headlights, not to mention a good sound system. In 2016, the car was given a mild makeover, receiving a 10bhp boost, LED lights, a new media system and some subtle styling changes. Underneath it all, though, it was the same great performance bargain.

Engine This has a taste for the black stuff but, unfortunately, you'll never know if it's been checked and topped up as necessary. If it's low when you dip it, assume the worst. The oil should be changed every 10,000 miles. Avoid a remapped car since you can only assume it's been driven hard. It will also invalidate any warranty. The coolant module is prone to leaking but replacement modules suffer the same problem. After a hot drive, a failing one will produce  a spicy, coolant smell.

Transmission Check the DSG's fluid and filters have been changed every 40,000 miles. Also, that the Haldex four-wheel drive coupling has had fresh fluid every 20,000 miles or three years. Make sure drive is going to the rear wheels. Manual cars can suffer premature clutch slip, so check its operation.

Interior Check everything works including the front windows, which can play up. Close them fully and press the switch in the up position for a moment to re-set them.

Infotainment Early cars' MIB1 systems (with 5.8in screen and up to end of 2015-reg) cannot have Apple CarPlay retroactivated.

Theft Check the car hasn't been stolen and recovered.

Ensure the DSG automatic gearbox fluid and filters have been changed at 40,000-mile intervals. Although this generation of DSG is not prone to the issues that afflicted earlier versions, it’s vital the gearbox is properly maintained. The Haldex clutch needs servicing every three years. 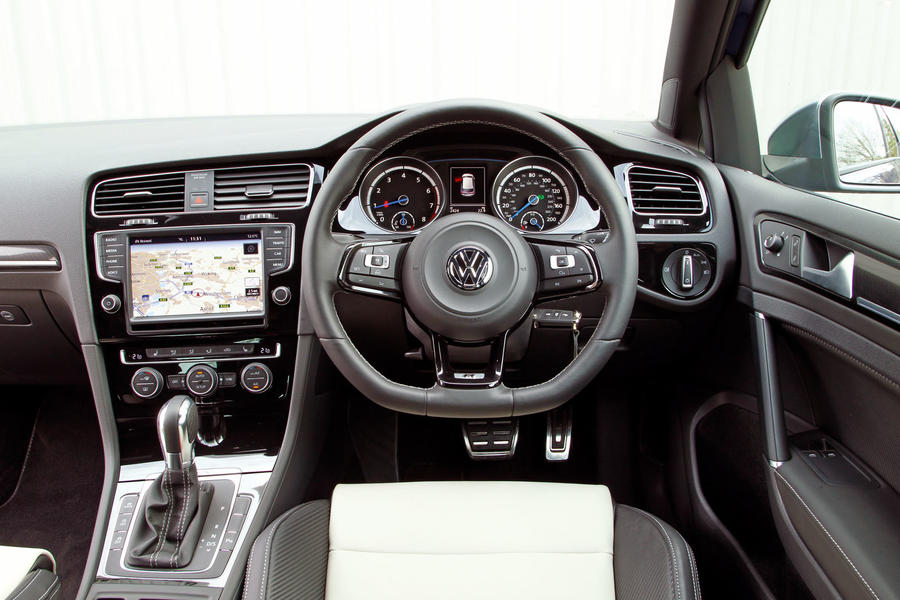 If fitted, check the optional 19in Pretoria alloys are free of damage as they’re susceptible to buckling. Replacements are very expensive.

The three-door version is still available on 2019/19-reg but has been dropped for the 2020 model year as the replacement Mk8 Golf R beckons. 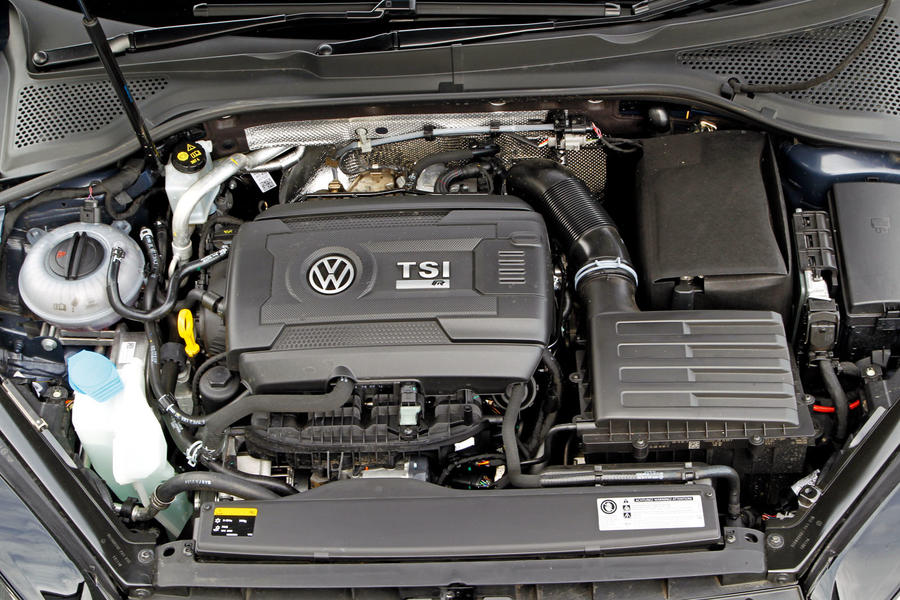 VW Golf R 3dr: Three doors and a manual 'box aren't exactly wild but, given that autos outnumber manuals by two to one and five-doors outnumber three-doors by four to one, at least they're scarce.

Possibly one of the 'Best' value propositions out there?

Stellar cars, my son had a Mk7. As a daily driver can't think of much better to drive at the price point?

And you can tune the living daylights out of the things, fairly reliably it would seem too!

(Lots of examples on Youtube.. Wwell worth checking out)

I just don’t like the image of these things, when you see one I it quite often is being like it’s stolen or is up to dodgy business or undesirables behind the wheel.
delticdave 5 November 2019

Golf R as a used car.

I just don’t like the image of these things, when you see one I it quite often is being like it’s stolen or is up to dodgy business or undesirables behind the wheel.

We, (my wife & I) feel insulted! We both own an R (Estate & 5-door hatch), never drive them like stolen cars & (we feel) are respectable citizens. We do find that very few people recognize the R badge, but that's part of the fun..... I also own an ancient tweaked (252 ps ) Superb 2.0 TSi & that really is a sleeper.