BACK TO ALL NEWS
Currently reading: Throwback Thursday 1962: the Oldsmobile Jetfire explained
UP NEXT
2023 Lamborghini PHEV supercar: Aventador successor spotted

The Oldsmobile Jetfire missed out on being the first turbocharged production car by mere weeks. In 1962, we detailed this new technology
Open gallery
Close

The turbocharger is so ubiquitous now that even those with no interest in cars to speak of will have at least heard of it.

That's probably partly because these devices are fitted to all manner of engines these days, from 0.9-litre three-cylinders in superminis right up to V12s in supercars, and partly because the word 'turbo' essentially came to mean anything powerful and cool during the 1970s.

Yet this technology has not been in the mainstream for very long. In fact, while the turbocharger was invented way back in 1905 and used on American aircraft during World War II, its first automotive application did not come until 1962. 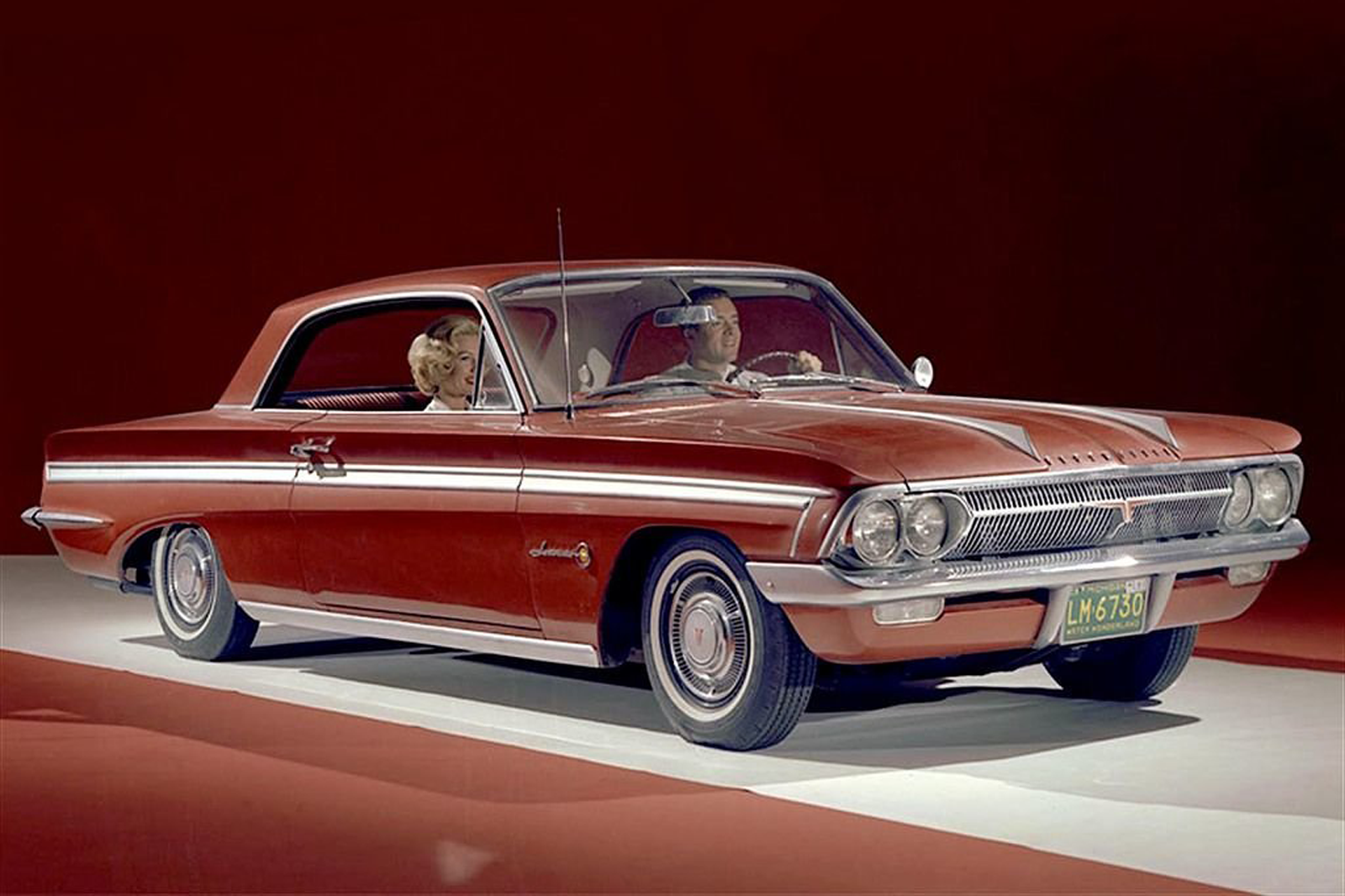 Turbos appeared on a pair of General Motors (GM) models: first the Chevrolet Corvair Monza and, just weeks after, the Oldsmobile Jetfire. These were not the first forced-induction cars, however; cars including the Graham eight-cylinder (1934), Cord 812 (1937) and Studebaker Golden Hawk (1957) had already employed superchargers.

"By adding the turbocharger to the [3.5-litre, aluminium-block] V8 engine, the Oldsmobile engineers have won a 40% power increase in the mid-speed range," he wrote. Indeed, the turbocharged engine made 215bhp, affording a 0-60mph time of less than 9.0sec. And, amazingly, this was done "without affecting engine flexibility, durability or fuel economy".

"These results could not have been obtained by increasing the cubic capacity of the engine or installing a larger, existing unit. Tuning of the basic V8 by raising the compression ratio, installing larger carburettors, revising the porting and modifying the camshaft would lead to a top-end power gain, but a loss of flexibility and an increase in fuel consumption". 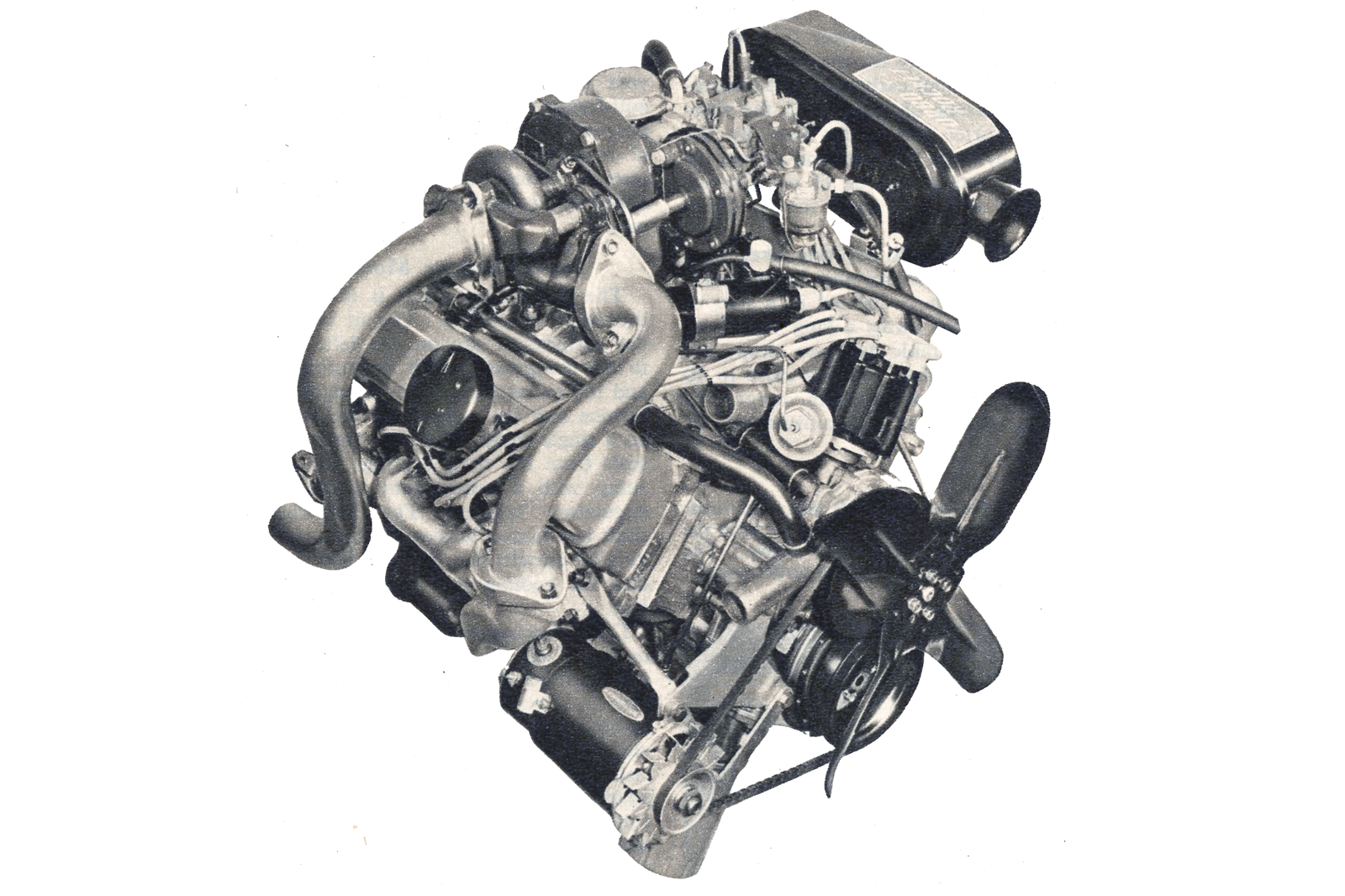 The idea for using a turbocharger had come from GM's chief engine development engineer, Gil Burrell, who had recalled an extensive technical report on the subject that the company had made "many years before" and decided to enthusiastically continue the research, which led to him contacting Garrett.

The mechanism that resulted was described by Autocar as "extremely elaborate, with numerous safety devices".

We said: "Those who are familiar with turbocharged diesel engines [these had already long been used in locomotives and trucks] may be surprised that it should be necessary to complicate the machinery so much merely because the impeller sucks through a carburettor and not from a pure air intake. "But a little thought will make it clear that blower pressure has to be limited. The high volumetric compression ration of 10.25:1 also makes it necessary to inject a water-alcohol mixture, and the carburettor is coupled to a metering device, with connections to a bypass should the fluid reservoir run dry."

That mixture, comically christened 'Turbo Rocket Fluid' consisted of 50% methyl alcohol and 50% distilled water and a small amount of anti-corrosion additives. It served to prevent detonation because early prototypes of the engines suffered from spark knock. The alcohol "served as an anti-freeze, making it possible to use the same fluid regardless of temperatures" and was injected between the carburettor and the compressor.

We explained further: "The nozzle is located in a part of the passage that forms a long venturi to obtain the desired pressure drop; the ratio of fuel to fluid remains close to 10:1 throughout the engine's rpm range."

Of course, in a naturally aspirated engine, this drop is created when a cylinder falls during the intake stroke, whereas turbo tech allows air to be sent into the engine at a pressure above atmospheric ('boost' pressure).

"Under cruising or coasting conditions, with the throttle partly open, there is a high vacuum in the intake manifold, so there is a check valve in the metering system to prevent fluid from being sucked into the engine at low or nil boost pressure. When the boost pressure in the manifold reaches 1psi, a diaphragm in the fluid metering valve opens a ball check valve, and the pressure in the fluid container tank forces the fluid through a jet to the injection nozzle." 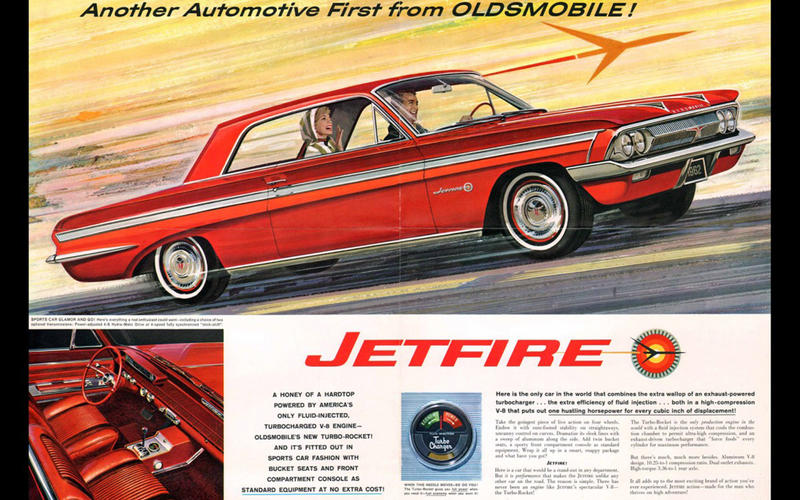 Oldsmobile's V8 consumed this fluid at a rate of around 8000mpg, but the reservoir was a mere 4.7-litres, meaning it could be emptied in less than 250 miles. When it was empty, performance would drop significantly (although it was still perfectly okay to drive the car), leading to many owners who had not refilled the reservoir taking the car back to the dealerships and complaining.

Given the system's complexity, it was natural that some cars suffered mechanical issues, too, and all this lead to Oldsmobile offering to replace the complicated turbocharger mechanism with a conventional 4-barrel carburettor. This means it's now nearly impossible to find an 'original' Jetfire because just 9607 examples were produced and most owners took up the offer of a replacement.

The Jetfire's turbocharger was "fitted across the top of the engine, with the turbine and compressor mounted on a single shaft". It was smaller than the Corvair's, with a compression diameter of 2.5in (to 2.4in). Its speed range was from 6000 to 90,000rpm; at a crankshaft speed of 14,000rpm, the turbocharger's pressure was just 14.7psi. Our report said: "Maximum efficiency is designed to come in between 2000 and 2200rpm, but boost remains high up to 5000rpm. Maximum power is developed at 4600rpm, as against 4800rpm for unblown versions of the V8.

"In normal driving, the turbine will cruise at 40,000rpm. For maximum acceleration, the throttle is opened wide, and the turbocharger has a remarkably quick response, accelerating to about 80,000rpm in less than a second."

The most amazing part of all this, Autocar's man considered, was that "the turbocharger is absolutely silent and free of vibration, not only at normal speeds but also when accelerating, reaching maximum and when idling."

While a valiant effort, neither of GM's turbocharged pioneers became trendsetters; the first truly successful turbocharged cars didn't come until the early 1970s, in the form of the BMW 2002 Turbo, Porsche 911 Turbo and Saab 99 Turbo – although sadly sans Turbo Rocket Fluid.

Rather a pity that BL didn't snap up this technology when they bought the rights to the nearly identical Buick V8 makes you think what the Rover engineers could have done with it.

...consumed this fluid at a rate of around 8000mpg, but the reservoir was a mere 4.7-litres, meaning it could be emptied in less than 250 miles.

How big's a gallon, US or imperial?

... not to forget the series of pre-war supercharged Mercedes

Nor the Blower Bentleys.

... not to forget the series

... not to forget the series of pre-war supercharged Mercedes from 1921, culmulating in the gorgeous 540K