BACK TO ALL NEWS
Currently reading: Under the skin: Why glass half recycled is glass half full
UP NEXT
2023 Lamborghini PHEV supercar: Aventador successor spotted

Recycling as much of a car as possible when it, or parts of it, reach the end of life has been a priority for years now, but a surprisingly awkward material to recycle is a car’s windscreen.

A new, one-year pilot project between Audi and a number of partners from the glass manufacturing business is expected to change that, but the task isn’t quite as simple as it sounds.

The main ingredient of glass is silica sand, melted down with a few other additives. Until now, recycled automotive windscreen glass has only been fit for making bottles and not been of high enough quality to meet the safety requirements needed for car windscreens. A windscreen is laminated, a sandwich with glass taking the place of bread and polymer the filling, which is typically polyvinyl butyral (PVB).

After the two pieces of glass have been cut and reheated on a mould to create the shape, the three components are pressed together and heated in an autoclave (a large pressure cooker), bonding them together. A screen might also contain fine wire heating elements or an aerial and be equipped with a rain sensor and interior mirror mount. All of these things, plus the PVB, is what makes it so tricky to recycle it into pure-enough glass to reuse it as windscreen material.

So how is the project aiming to overcome the problem? After the cracked and broken screens have been collected at dealerships, one of the project partners, Reiling Glas Recycling, crushes the broken screens and uses magnets, non-ferrous metal separators, extraction units and electro-optical sorting units to remove all the scrap. After that, the glass granules go off to Saint-Gobain Glass, where it’s separated by colour.

To make new plate glass, the granules, which by then are as pure as possible, are mixed with quartz sand, sodium carbonate and chalk (posh name: calcium carbonate). Of that, between 30% and 50% of the mixture consists of the recycled glass, but the project team hopes to improve on that as time goes on.

The raw material is processed into large rectangles of plate glass measuring 3m by 6m before going to an associate company, Saint-Gobain Sekurit, which turns it into automotive-grade glass. Recycling laminated safety glass in this way is said to produce 30% less CO2 than starting from scratch.

If the project is successful and the go-ahead is given to move into full production, Saint-Gobain Glass is planning to process up to 30,000 tonnes of the crushed glass shards into high-quality automotive glass a year, some of which will be used in the Audi Q4 E-tron.

With that amount of material being recycled, the glass manufacturer says it will save natural resources, including water, and the energy savings will equate to a daily reduction in CO2 emissions of 75 tonnes.

How to test tyres indoors 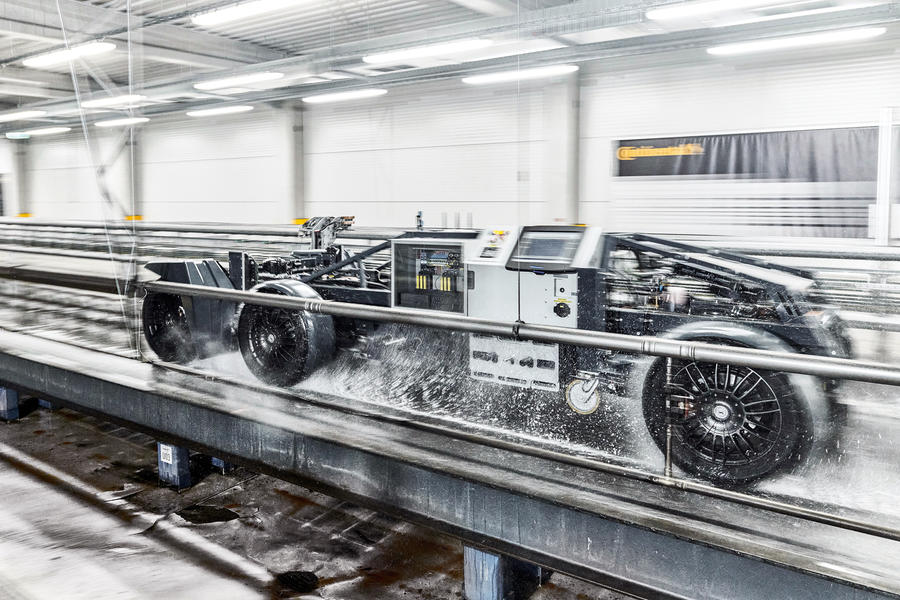 AVA performs 100,000 tests on premium tyres annually inside an air-conditioned hall running on a 350m track with interchangeable road surfaces.