BACK TO ALL NEWS
Currently reading: Under the skin: How Pirelli tailored its new tyre to EVs
UP NEXT
Why last-mile delivery EVs are big business for car and retail firms

Under the skin: How Pirelli tailored its new tyre to EVs

If you're a tyre designer these days, you could be stuck between a rock and a hard place. Why? Because of EVs – more specifically, high-performance EVs. Tyres are a melting pot of compromise, trading off between grip, ride quality, wet handling, dry handling and rolling resistance.

Over the past decade, the significance of rolling resistance has been steadily increasing in line with the need to find that last percentage point of efficiency to reduce CO2 emissions. Suspension and tyres are closely matched during the development of a car and certain tyres are recommended for used on a particular model for that reason. An example is the Pirelli P Zero Elect, developed in conjunction with car manufacturers as a dedicated EV tyre.

One of the trickiest fitments was the Porsche Taycan, simply because achieving safe handling and roadholding in a high-performance car conflicts with low rolling resistance. An added challenge is designing a tyre that can support the extra weight of EV batteries without its construction being so stiff that it ruins ride quality.

Traditional tyre manufacturing methods of dealing with the higher loads of extra vehicle weight also make the tyre heavier, which in turn increases rolling resistance. And generating enough grip to harness the extreme, unrelenting torque developed by a powerful EV has to be balanced against rolling resistance and wear.

Road noise starts as vibration in the tyre, which is transmitted to the chassis, and Pirelli’s boffins say that understanding the physics of this particular phenomenon is crucial. The lion’s share of rolling resistance is caused by hysteresis: the tyre squashing as it rolls onto its contact patch and springs back as it rolls off it. Not all of the energy taken to squash the tyre is recovered: some is lost as heat, and that loss has to be made up by the car’s engine or electric motor.

Damping materials within a tyre’s construction soak up vibration and reduce road noise but also increase energy loss through hysteresis. To offset that, the P Zero Elect is designed to concentrate deformation in specific areas where there are fewer damping materials to reduce energy loss.

The way in which the compound is manufactured also has a profound effect on rolling resistance. New polymers and the way they chemically bond with fillers in the compound (particularly the silica in the P Zero Elect) influence the manufacturing.

The precise details of the manufacturing process are a closely guarded secret, but Pirelli isn’t worried about its technology being pinched by competitors. It may be possible to analyse the composition of the tyre, but without knowledge of the process, engineers are confident the characteristics of the finished material can’t be replicated.

They compare it to making fine Italian pizza: you can take fl our, water, salt and all the right ingredients, they say, but you still need the knowledge of how to prepare the dough, the process and the temperature of the oven to make a good one. Much the same is true when it comes to cooking up a high-performance EV tyre.

Go in with studs showing 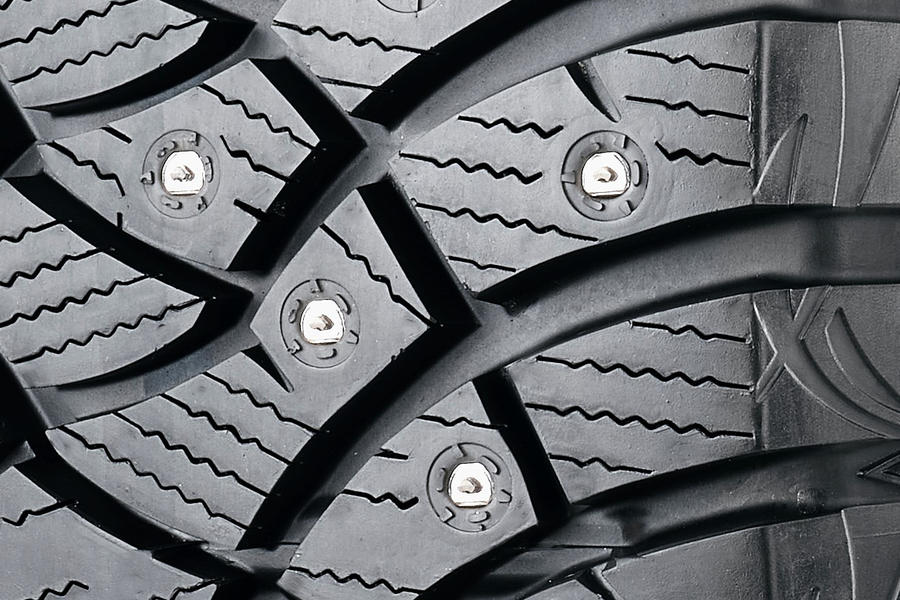 Studded tyres aren’t legal on public roads in the UK, but some new stud technology could change that. Falken’s Winterpeak F-Ice 1 tyre is manufactured with small, lightweight studs that are directional.

Instead of the end of the stud being cut at 90deg to its length, it slopes downward, away from the direction of travel, so that the stud meets the ground smoothly as the tyre rotates. The design not only reduces weight, noise, vibration and road wear but also bites into ice more effectively.

Under the skin: Why seasonal tyres will help you get a grip

The other elephant in the room is particulate pollution from car tyres something which the manufacturers are in denial about, at least in public. I also suspect this polution ending up as microplastics in our oceans will put even more pressure on them? Already most academic research suggests car tyres produce more pollution that Euro 6 diesel engines.

At some point they may need to produce harder tyres, which wear less and perhaps have less braking performance in order to reduce this, relying more on more advanced accident avoidance technology to reduce the need to shorter braking distances and grippier tyres?

Is there part of this article missing? It all reads as introduction, then abruptly switches to a brief description of a new studded tyre, then ends. This had the potential to be really interesting, but actually tells the reader nothing.

I thought the same thing! The switch to the studded tyres blurb was a bit jarring...