BACK TO ALL NEWS
Currently reading: Alfa Romeo starts work on Maserati-based SUV
UP NEXT
Volkswagen committed to 'entry-level' ID electric models

Alfa to take on mid-size SUV rivals from Porsche and Land Rover with new SUV, which should arrive in showrooms in 2016
Share
Open gallery
Close
Share story

This unlikely looking Maserati-based mule is the first evidence of the upcoming Alfa SUV, which should arrive in showrooms in 2016.

The new SUV is expected to be sold in both rear and all-wheel drive versions, featuring the same drive system as the Quattroporte Q4. It will have a distinctly sporting brief, being more of a spiritual competitor to the dynamic Porsche Macan, while trying to capture the kind of stand out styling that has made the Range Rover Evoque a global best seller.

Judging by these pictures, the new Alfa SUV will be based on a shortened version of the Maserati Ghibli platform.

Close examination of these pictures reveal that this mule has a shorter rear door than the production Ghibli, a shorter wheelbase and less space between the front wheel and the front door - all of which points to the Alfa SUV being some 300mm shorter than the Maserati donor car, at around 4.65m long.

This mule also has the correct windscreen surround and roofline for the final Alfa bodystyle. Judging by the aggressive angle of the roof and the position of the rear wheel, this Alfa will be marked out by dramatically curvaceous bodywork.

Its Maserati roots should also endow the Alfa with double wishbone front suspension, independent rear suspension and the option of adaptive damping.

The latter units will be the first diesels to use the MultiAir variable valve timing and lift technology and will help the motors meet new EU6 pollution laws.

There have also been unconfirmed rumours that the top of the range Alfa engines will feature ‘developed by Ferrari’ sub-branding. The Alfa SUV will get the same eight-speed automatic transmission as the Maserati range, but a manual transmission looks less likely.

The Alfa Romeo brand will be formally re-launched as a competitor in the highly profitable global premium car market next June, when the new BMW 5-series-sized, rear-drive, Alfa Giulietta will be unveiled. This SUV is expected to become the second new-generation Alfa model line because the market for premium SUVs is booming and would be highly receptive to a new entrant.

There will also be a big Maserati SUV model based on the full-size Ghibli platform, for which the styling has already been signed off. This Maserati model is expected to be built at Fiat’s Mirafiori factory, a section of which is currently being overhauled and re-fitted. Badged Levante, the first Maserati SUV could be unveiled at next March’s Geneva motor show. 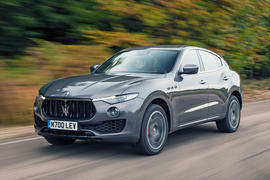 Houston I have a bad feeling about this mission.

Oh dear. Is this going to be an Alfa gem (like the Bertone Coupe or the GTV6) or a turkey (like the Arna or the Brera)? Hmmm, I'm an Alfaholic but I'm smelling brussel sprouts and Xmas pud. I'll be delighted if I'm wrong. Also, aren't 2wd SUVs normally FWD rather than RWD? With all that weight and RWD, it'll handle like a pig in slippery conditions surely? (Enough food metaphors methinks.)
dipdaddy 6 November 2014

All future Alfas will come through the Special Works. All will be rear wheel drive, or AWD. Money now is not a problem, so we will see the true abilities, of what Alfa can achieve.
The 4C was nicked off Abarth, at the 11th hour, and priced IMO way too dear, yet, they sold out.
New engines are on the way, so watch this space!
Andy.
optima 6 November 2014

I hope FCA will spend the money using quality materials to match BMW / Mercedes / Range Rover in their new Alfa models. All the time the cars are let down by the use of cheap materials in the cabin. Alfa also needs to sort out its dire dealer network and invest some money there if it wants to build up sale in the UK.
View all comments (9)