BACK TO ALL NEWS
Currently reading: Kia previews new Sedona ahead of New York debut
UP NEXT
New Ford Mustang Mach-E GT is fastest-accelerating electric SUV

Kia has previewed the new Sedona MPV with a second official picture ahead of its debut at the New York motor show next week.

The Sedona is expected to go on sale next year, but Kia has already confirmed that the new model won't be coming to Europe. Instead, it's expected to be a US-only car. The last version of the Sedona to be sold in the UK was axed in 2012.

This picture shows the new mid-size MPV gets Kia's new corporate front-end design, with a larger, more prominent front grille, new LED lighting and a raked windscreen. The new model will be able to carry eight passengers as well as luggage, with the new Sedona being aimed at "adventure seekers". A statement from the firm says the new Sedona will "further raise the bar in styling and specifications for the segment".

The new car should continue Kia's trend of giving its models more distinctive styling. Head of design for Kia and Hyundai Peter Schreyer told Autocar last year that he wanted to see the two brands gain greater differentiation in the market.

Engines powering the new Sedona include a new 3.3-litre V6 GDi petrol with around 290bhp and 252lb ft of torque. A range of diesel CRDi engines should also be offered. Kia says the model also features its next-generation infotainment and telematics system, dubbed UVO.

The Korean manufacturer decided to phase-out production of the European-spec Sedona in 2011, with senior sources telling Autocar there wasn't a demand for large MPVs any more, and that sales in the sector were steadily declining. "It's hard to make a business case for a large MPV with lots of power and high emissions", said the source. 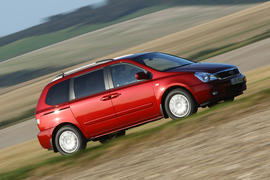 The Kia Sedona offers lots of space for seven, but it is no longer the spacious bargain it once was

3 April 2014
Can they please bring the 2.0 litre turbo engine into the optima - the reason one is not on my driveway is because no petrol option. Not everyone wants a diesel Kia!

I don't think I have seen the porevious sedona version on the road in the Uk - or if I had it was probnably not memorable!

Why does Autocar need to report on non-UK models ?

3 April 2014
As subject, why - this isn't relevant news - or are you going to run an article on the fact that GM aren't launching Buick models in Europe ?

3 April 2014
Why is KIA not bringing the Sedona to the UK ?. The last model did very well over here for large MPV's. There is a market for the Sedona here as we now have only the VW/SEAT offering or the Ford Galaxy/ S MAX, Hyundai i800 and SsangYong Turismo as full size MPV's.

If its US only then how come

typos1 wrote:If its US only

If its US only then how come it will be called "Carnival" in some markets ? !

It'll be Sedona in the US and Carnival in other markets where it's sold.

So grammatically the Sedona is a US-only version.

typos1 wrote:If its US only

If its US only then how come it will be called "Carnival" in some markets ? !

Well spotted, as you've alluded to - it's not US-only. Carnival is the name used for the Korean domestic market.

10 April 2014
Why has this come back to the top of "news" on the website - it's as if there's no news about cars for the UK so publish any irrelevant items to fill the gaps.

11 April 2014
Kia has gone leaps and bounds in terms of its styling, especially under Schreyer's design direction.
This Sedona is either very long or the windows are really short, which gives it a very sleek estate look to it.

American car companies has a lot to learn from the Koreans, if they ever will, as Chrysler/Ford/GM haven't got their design and detailing right for over the last 30 years.