BACK TO ALL NEWS
Currently reading: Williams and Italdesign offer firms 'turn-key' EV package
UP NEXT
First electric Lamborghini due by 2030 as two-door GT

Williams Advanced Engineering (WAE), the Formula 1 team’s technical division, has partnered with Italian styling house Italdesign on a new high-performance EV architecture that will be offered to customers as a full ‘turn-key’ package.

Designed for car makers seeking a highly capable EV in a production run of 500-10,000 units per year, it is based on WAE’s new lightweight EVX architecture, which the British firm says is capable of being used for GTs, crossovers and saloons.

The platform combines recycled composite materials with aluminium and differs from many in that the battery casings are integrated into the body structure, with the front and rear chassis structures then mounted to that carbon-composite unit.

WAE claims that this design gives greater flexibility of layout, sets new standards for torsional stiffness and offers more freedom for a variety of ‘top hats’. Encompassing the car bodywork, infotainment system, safety aids and other technology, these top hats are customised by Italdesign in conjunction with the customer firms.

It is this integrated full-service solution that WAE and Italdesign believe makes their offering stand out. WAE business development chief Dyrr Ardash said: “Both firms bring significant expertise to this, providing a platform to deliver an EV with performance and value to customers.”

He added that the EVX architecture will enable cars that are “class leading in terms of dynamics and mass”. 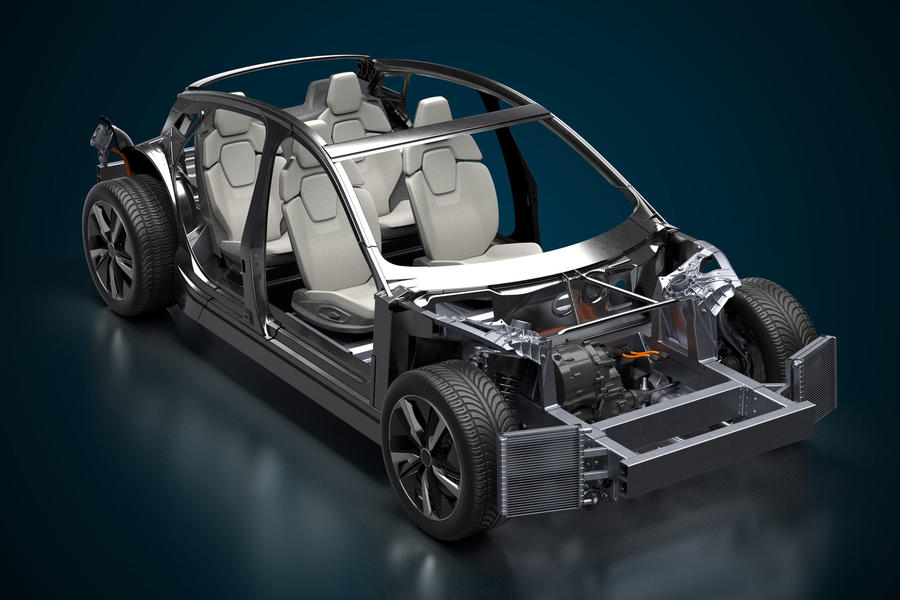 The EVX can be fitted with two, three or four electric motors from a variety of suppliers, with up to 1341bhp in the highest spec resulting in a 0-62mph time of 2.4sec.

The core structure is designed to house battery packs ranging from 104kWh to 120kWh in capacity but in certain forms can go up to 160kWh, thus potentially offering 620 miles of range.

WAE will supply the battery systems, using expertise it has gathered as a former supplier of Formula E and the current supplier of Extreme E and eTCR. The EVX can also be adapted for the production of several variants based on a particular design; for example, allowing for GT and crossover variants of a saloon. Italdesign has the capacity to make 500 cars per year at its Turin plant, but customer firms will be able to build up to 10,000 units themselves.

WAE and Italdesign also say their project reduces the lead times for production: a prototype can be produced within 12 months and the car launched within three years.

Insight: How car firms have stepped up to help NHS

I think this is the way EV'S are going to end up, standardization will make automated driving alot easier if "all cars" all speak the same exact language.