BACK TO ALL NEWS
Currently reading: Wiesmann Project Thunderball is 671bhp electric convertible
UP NEXT
Quarter of UK cars produced in April were electrified

German sports car firm Wiesmann has made a hard-hitting comeback after several years of media silence with the reveal of its new Project Thunderball - not only its first electrified product, but also the world’s first electric rear-wheel-drive convertible sports car since the original Tesla Roadster.

The brand – best known for a series of retro-styled sports cars using straight-six, V8 and V10 BMW engines – is on the comeback trail after a tumultuous period since filing for bankruptcy in 2013.

He hailed the new car's arrival as "a remarkable moment in time for the Wiesmann brand and the culmination of a dream of years of design and engineering excellence." It will be, he said, "the world's most exciting electric sports car."

Priced from €300,000 (£252,000) and expected on roads late this year, the Thunderball features a pair of motors on the rear axle delivering a combined 671bhp and 811lb ft - enough, Wiesmann says, to get the circa-1700kg roadster from 0-62mph in just 2.9sec. The powertrain was developed in partnership with fellow German sports car maker Roding Automobile, which specialises in lightweight, carbonfibre construction and is best known for its flagship model, the Roding Roadster, which uses a BMW straight six and weighs just 950kg.

Roding also supplied the Thunderball's 83kWh battery, which features 800V hardware for charging at speeds of up to 300kW and should be good for a range of 311 miles. 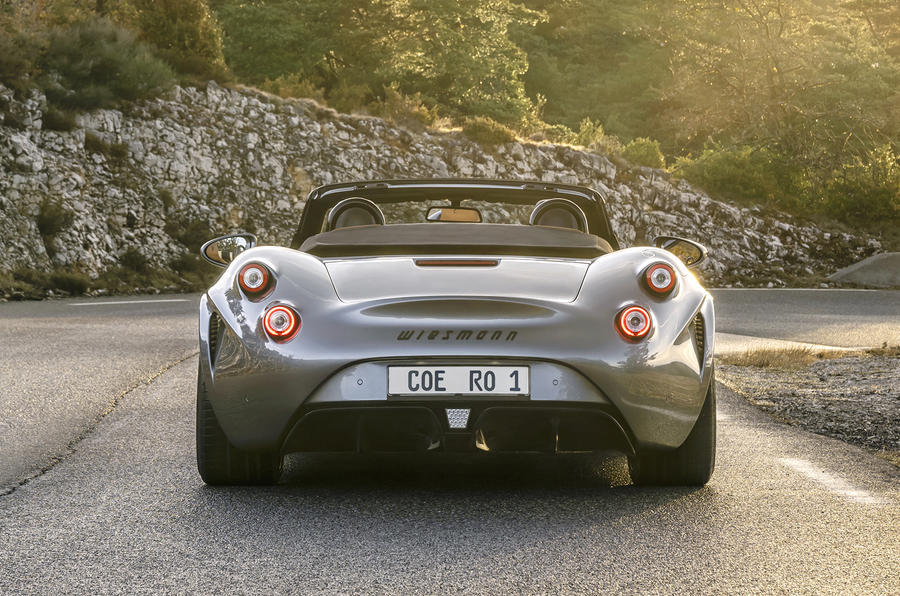 The firm is keen to emphasise how closely related, dynamically, the new EV will be to its combustion-engined forebears.

It claims the regenerative braking system has been developed especially for the Thunderball and, with five settings, can be used "to give a powerful engine braking effect into corners" and thereby give "a purposeful moment of enjoyment to the driver, something lacking in most EVs on the market today".

The links to previous Wiesmann models extend to a familiar design treatment, clearly still inspired by sports cars of old but with fresh touches throughout to mark this out as the beginning of a new era for the firm.

The distinctive ovoid grille mirrors reference those of the V10-engined Wiesmann MF5, for example, and although the headlights are integrated into prominent new air vent housings, they are arranged in a familiar vertical layout.

The clam-shell bonnet is still long, too, despite the lack of an engine, so the roadster bears a familiar cab-back silhouette reminiscent of historic British sports cars like the Austin Healey and Jaguar XK120.

Inside, Wiesmann has sought to showcase the same blend of modernity and tradition, with a carbonfibre dashboard housing a large touchscreen and seven analogue dials with laser-etched badging. There are carbonfibre sports seats, too, finished in the same leather as the door panels and glovebox, and a new-look multifunction sports steering wheel.

The car will be built at Wiesmann's 'Gecko' factory in Dülmen, Germany, by "many of the team which helped grow this iconic German brand, the last truly independent European sports car marque remaining today", the firm says.

This is absolutely wonderful.

It's an EV that still thinks it's an ICE

I can't see this odd looking car having much of a following when, instead of imitation classic sports car such as this, 'real' old sport cars can be restomod and electrified.

EV or ICE ?, it doesn't matter, on the Road you shouldn't be using all that torque especially when it wet or icy, same goes for any powerful Cars, ok, It might not matter in some Countries,but, what about the inexperienced drivers?, as far I'm aware no car sellers turn down buyers solely on driving experience, at best an advert for new tech, they're made in limited numbers, your never likely to see one.

If there is uncertainty in this troubled world then the certain thing is Peter spouts shite!