Cupra has confirmed it is developing a hotter version of the Formentor SUV - and prototype shots suggest it will sport a near-400bhp five-cylinder engine.

The Spanish brand, formerly a sub-division of Seat, has only just launched the Formentor with a 306bhp 2.0-litre four-cylinder turbo petrol engine and a 242bhp plug-in hybrid powertrain. However, it seems the line-up won't stop there.

In a statement sent to Autocar, Cupra has officially confirmed it is "considering a more powerful version of Formentor, the ultimate expression of high performance from the CUPRA brand.”

Spy photographers caught an undisguised test mule sporting unusual stacked quad exhausts not seen on the production car. They also reported a distinctive five-cylinder engine note as it went past. Similar prototypes have been seen (and heard) in previous months. 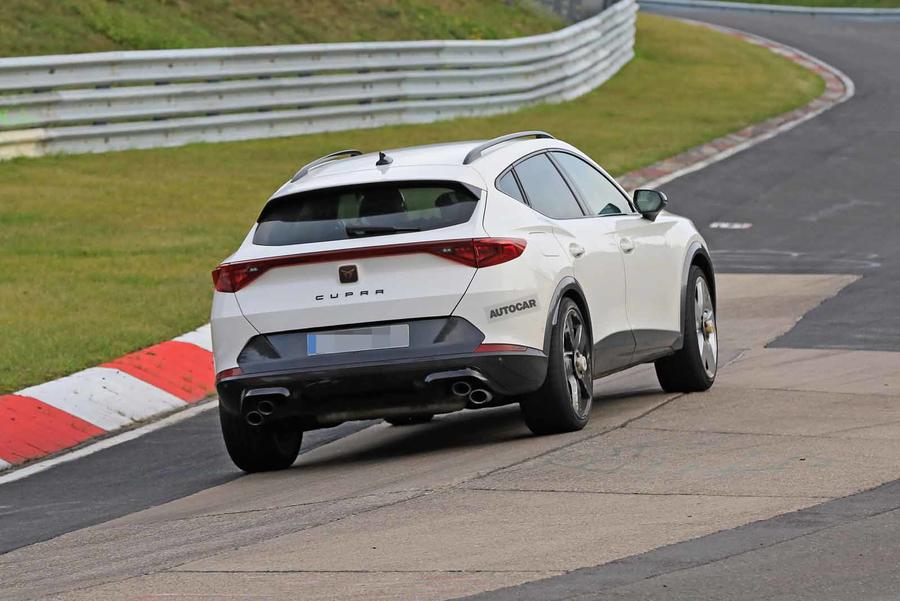 Cupra has recently registered the Formentor name with the acronym VZ alongside. Rumours suggest it could be used as a range-topping performance model in the same way that the RS badge is used by Audi - although it has also been used for a limited-run "VZ Edition" Formentor.

Indeed, the only five-cylinder engine in the Volkswagen Group stable is Audi's 2.5-litre unit, which finds service in the RS Q3, Audi RS3 and TT RS. It makes 394bhp in those cars, and it's likely that output would be retained for a potential Cupra flagship.

The current fastest Formentor, the 2.0 TFSI, is capable of 0-62mph in 4.9sec and a top speed of 155mph. While the top speed of a five-cylinder flagship would likely be similarly limited, we would expect the 0-62mph time to fall to around the 4.0sec mark.

That makes more sense for

That makes more sense for Cupra (which should still be a SEAT). Probably should have launched with this available too

Great to see that a mainstream manufacturer is still willing to put such an engine into a car, usually its a 1.0 three cylinder, turbo hybrid...blah blah blah

Great to see that a mainstream manufacturer is still willing to put such an engine into a car, usually its a 1.0 three cylinder, turbo hybrid...blah blah blah

Agreed although even a three cylinder has something a little different from the 4 cylinder, turbo'd to the hilt, vacuum cleaner motors they're sticking in everything nowadays. Threes, fives, sixes, eights and twelves are far more aurally interesting.