One such car arrived in 1986, but how about in 2021? We compare two rather different fast Fords
Open gallery
Close

What could a 1980s fast Ford and its 2021 all-electric descendant possibly have in common? Are they chalk and cheese or two peas in a pod?

In 1986, 35 years ago, Ford launched the Sierra RS Cosworth, then its fastest production road car to date, with a top speed close to 150mph. This year marked the launch of the Mach-E, its first proper EV, so the opportunity to get the two together and ponder how much things have changed is too good to miss.

This Sierra was a homologation special designed to form the basis for an International Group A racing car. Five thousand was the number that manufacturers were required to put on public sale with fundamentally the same mechanicals that they would need on the track. The main reason for producing it was to win the FIA Touring Car Championship (now the European Touring Car Championship), and it did that with flying colours.

My example is the last known remaining car from the fleet of 10 run by Ford’s press garage in Brentford and wears its original aluminium plates, carrying only the registration number and the Blue Oval. The actual car I ran for 12 months on long-term test from 1986 to 1987, it spent around 25 years in Australia in private ownership, and when it appeared again in the UK, I was able to buy it and return it to original specification.

While the Mustang Mach-E is entirely different and with a different purpose, it’s still very much a performance Ford. This one is the four-wheel-drive Extended Range version, powered by an electric motor on each axle. Like all EVs, it’s at the cutting edge of technology, whereas even back in the day, the Sierra wasn’t. Its 2.0-litre 16-valve Ford Cosworth YBB engine was essentially an up-to-date version of the famous 1970s BDA engine with the addition of a turbocharger. 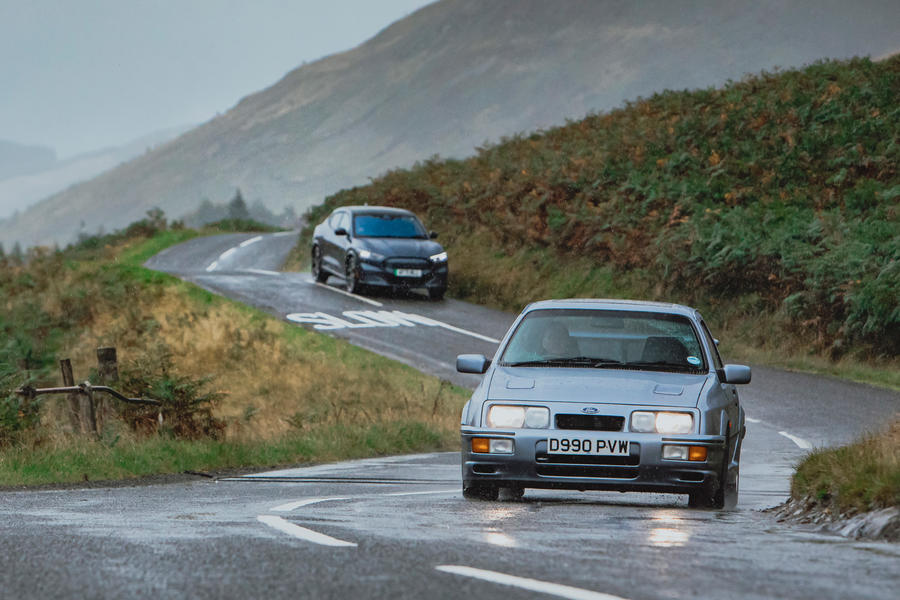 So let’s cut to the chase. How do these cars illustrate the change in trends over the past 35 years? All cars inevitably reflect the culture in a car company and the character of the people who created them. In that respect, the apple hasn’t fallen far from the tree. The Sierra was developed at Ford Special Vehicle Engineering at the Dunton Technical Centre in Essex. The Mach-E is the product of the newly formed Ford Team Edison working out of an old factory in Corktown, Detroit.

Ford chose anti-hype in its advertising for the Sierra, letting the visual drama of the winged beast do the talking. A double-page spread carried a moody studio image of a Moonstone Blue car like this one over the understated headline ‘Sierra by Cosworth out of Special Vehicle Engineering’. With the Mach-E, Ford has upped the ante a bit but still kept it tastefully reined in. ‘Electric. And untamed’ reads one headline and ‘The future of exhilaration’ another.

Naturally, the two are technically worlds apart. The dual motors of this Mach-E are fed by a lithium ion battery pack containing 376 cells with 88kWh of usable energy. Peak power is 346bhp and torque 427lb ft – both figures unthinkable in 1986. But equally unthinkable back in the day was the idea of a 2.0-litre European production Ford making 201bhp at 6000rpm and 203lb ft of torque – twice that of the basic 2.0 Sierra with the potential for twice that again.

Infotainment? The Sierra has a stereo on which you could listen to Sade, Alison Moyet or whoever else took your fancy in the 1980s. The sound quality depends on how bumpy the road is and the age of the cassette. There’s FM radio, too – as long as you remember to pull up the chrome aerial from the rear wing. 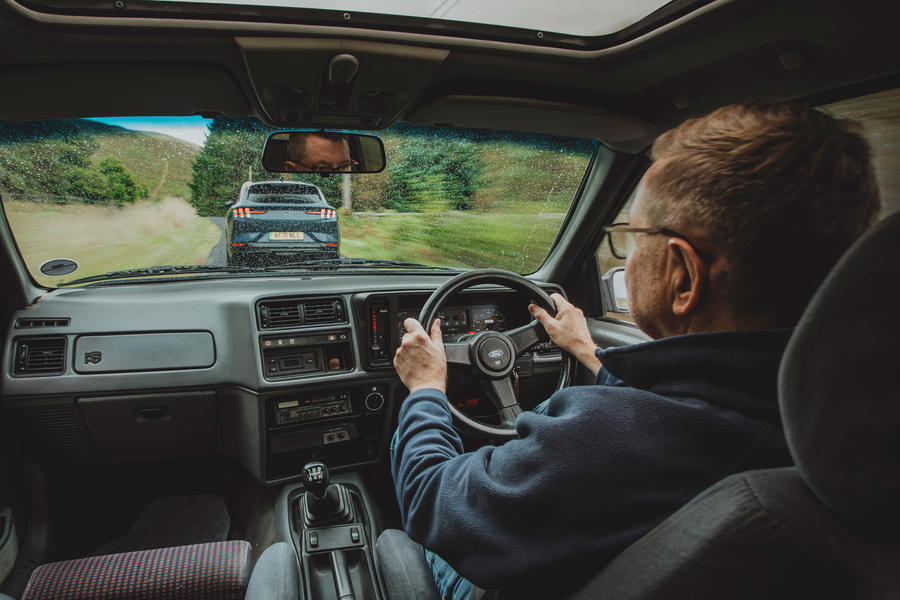 In contrast, the Mach-E has Ford’s latest Sync 3 system, which presents 80 vehicle settings via a giant touchscreen. Even standard sound systems today are better than the most expensive aftermarket ones back in the Sierra’s day. Apple CarPlay and Android Auto allow you to morph a mobile phone onto the dashboard, whereas a ‘briefcase’ mobile phone in 1986 would occupy most of the passenger compartment and just about make a call if you were lucky.

The Sierra’s interior is famously old-school Ford in that, apart from the bespoke Recaro seats, it’s cheaply made to look as good as possible. Since then, materials and manufacturing technologies have moved on, Ford has raised its game a long way and the Mach-E is lusciously finished inside.

Long-distance travel is no problem in the air-conditioned luxury of the Mach-E, while the only chance of staying cool in the Sierra is a sunroof, air vents and open windows. The Mach-E may be an SUV and the Sierra a mere family hatchback, but both have five seats and the luggage compartments aren’t dissimilar at 385 litres for the old car and 420 litres for the new one. Park the two side by side and the trend towards bigger and heavier cars since the 1980s is obvious to see. Which brings us to the driving experience.

The Sierra is smooth and easy to drive and, thanks to its light weight, its handling and agility through the switchback turns of the Scottish Borders set my heart fluttering with delight.

The steering is analogue and the change of direction predictable and linear, with natural feedback through the hydraulic power-steering rack. The Mach-E’s steering feels digital and synthetic by comparison – sharp and almost over-responsive. There’s a sense of piloting by wire rather than being directly connected to the road.

Even though its weight is masked by clever engineering and technology, the Mach-E feels colossal. Admittedly, Ford has done an impressive job of keeping the weight down: even with its large battery, this car weighs only marginally more than some ICE SUVs of a similar size. But while the Sierra sails over crests and effortlessly changes direction, he Mach-E feels less poised on these twisting, undulating roads.

The early turbocharger technology and electric drive share something in common, though. The instantaneous torque from the EV’s powerful electric motors continues to spool out endlessly, and although the Ford Cosworth engine needs to get above 3000rpm to really get going, when it does, that slingshot feeling is similar. 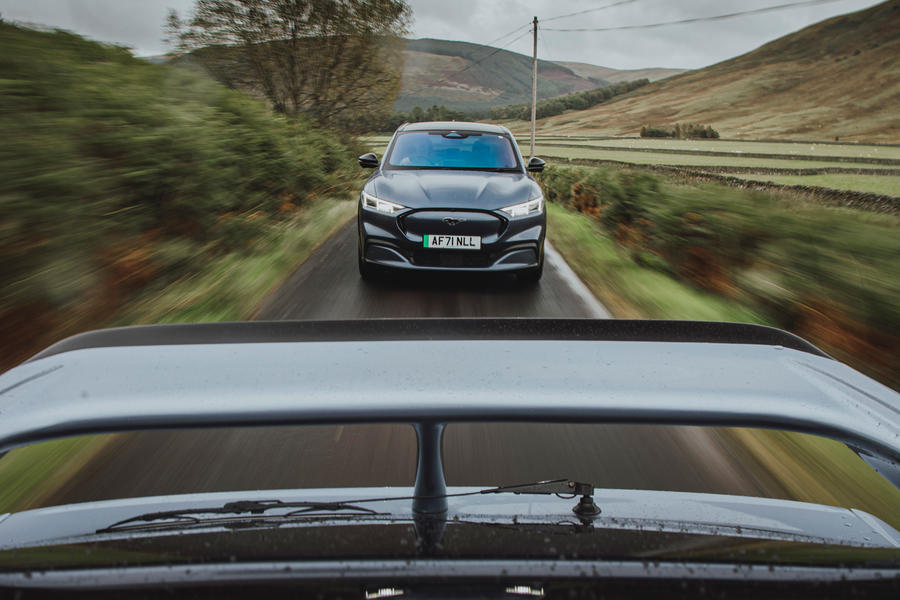 Driving these two cars back to back gives me the sense that over the past 35 years, mainstream manufacturers across the board have taken both forward and backwards steps. Cars could be smaller and lighter yet remain safe and spacious and be more involving to drive as a consequence. Too much connectivity to the outside world is distracting and lane-keeping assistance systems are annoying and hit-and-miss, but adaptive cruise control makes motorway driving less tiresome and the sophisticationof modern infotainment and sat-nav systems is a huge bonus.

Despite the past few decades of evolution, perhaps the perfect car has yet to be made. A Sierra-sized electric Mustang Fastback GT to partner the SUV would be something else, wouldn’t it?

It looks like Ford has plenty of ideas for upholding its Performance heritage in the future. For example, the Mustang Cobra Jet 1400 dragster has the power of more than three Mustang V8s and recently turned in an 8.27sec quarter mile (that’s 168mph) in testing before making its public debut at the NHRA US Nationals. It’s powered by four integrated inverter motors spinning at up to 10,000rpm, each making 469bhp, giving it a total of 1502bhp at the wheels. 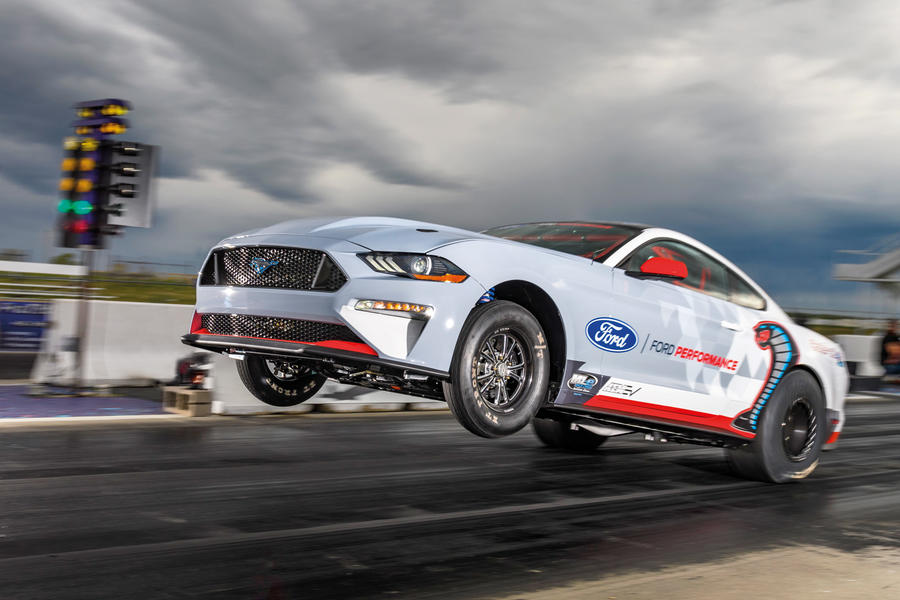 Furthermore, the Mustang Mach-E 1400 is a prototype drift car from Ford Performance and RTR Vehicles that gets 1400bhp from no fewer than seven electric motors. Its rear wing outdoes the Sierra RS Cosworth’s by some margin, producing 1043kg of downforce at 160mph. The drivetrain is adjustable for front-rear balance and the drift car suspension set-up is fully adjustable. Also demonstrated at the Nationals, it covered the quarter mile in a not too shabby 10.78sec (that’s 134mph).

A very long time ago I was able to drive a tuned Sierra Cossie round Mallory Park: that was quite an experience, with 300+ bhp and racing tyres, that track beast flew like nothing I had driven before! Below 4K revs, it was fast but docile; however, past that mark and up to 6K it became VERY lively! My memories are bit blurred now but it was a case of sticking to the racing line and touch the brakes only when an accident seemed inevitable... Yes! An experience!

A few weeks later, driving a 'standard' Cossie with 200 horses felt like an anti-climax; even the Datsun 200 Summatorother Coupé felt livelier -probably was not as quick but felt it!

Those were the days...

Somehow, I am not sure that the E-Mustang will tingle my spine if I ever drive one!

jason_recliner 25 October 2021
I test drove an i30 N-Line the other day. Same power and torque as this Sierra. Only slightly heavier. Better in every single way and really nice to drive. Probably half the price of the Sierra in today's bubble market. I'll take the Hyundai.
eseaton 24 October 2021
From the Leaf to the Rimac thing, I just don't care.

The is not an electric car made that I would be interested in driving if offered the keys for the day.