BACK TO ALL NEWS
Currently reading: From track to Tarmac: meeting the man behind Dallara
UP NEXT
New Porsche Taycan Sport Turismo on sale from £73,560

From track to Tarmac: meeting the man behind Dallara

Acclaimed engineer Gian Paolo Dallara always wanted to create his own car, and now the company he founded in 1972 has finally done it
Open gallery
Close

The recent unveiling of the Dallara Stradale was a proud moment for Gian Paolo Dallara, the 81-year-old engineer whose eponymous motorsport engineering company employs 600 people worldwide and builds more racing chassis than any other.

The Stradale, the company’s first road car, had been a long time coming and, during an hour-long interview, he tells me that it was his earlier career that provided the inspiration for it. Dallara’s CV gleams with highlights. He was recruited after studying aeronautical engineering at university by Enzo Ferrari and set up Maranello’s first ever wind tunnel. But he wanted to go racing so he defected to Maserati under the promise of working in motorsport, but his plan was stymied when the company axed its works programme.

So Dallara went to Lamborghini to become technical director and was one of the key engineers of the Miura, the first mid-engined supercar and the one that created the archetype still being followed today. He had done all that, and founded his own company, before he was 40.

Yet it turns out his personal engineering hero wasn’t Enzo Ferrari or Ferruccio Lamborghini or any of the Italian stars who worked under them, but Colin Chapman. One of the highlights of our conversation in his factory office is when he produces a black and white snapshot of him showing Jim Clark and Chapman the then new Miura at the 1966 Italian GP. “Chapman asked to come and see it, so I showed him around,” Dallara says. “He liked it. I believe he wanted to do something similar.”

Dallara cites Chapman’s Lotus Seven, rather than any of the exotic products of his former employers, as the most influential sports car, so it’s little surprise that he chose to go the same way with the Stradale. “Producing a road car will never be our major activity,” Dallara says.

“We realise that we will never be in competition with the big GT manufacturers. They are in another world. Visit Ferrari and you realise that if you tried to be Ferrari, you would fail immediately… I always wanted to make a car that was light, that was simple – so you can smell the flowers and feel the air passing.” Work on what became the Stradale project first began 19 years ago but was paused several times. “There was always something more important to do,” Dallara says.

“Then three or four years ago, I realised that it was now or never. I was close to being 80 so it could not wait a lot longer.” The project was quick to gather momentum and the finished Stradale was presented at a special event on Dallara’s 81st birthday. Yet the Stradale isn’t just the realisation of a long-held dream to see his name on a road car, but also a demonstration of the engineering expertise the company offers. 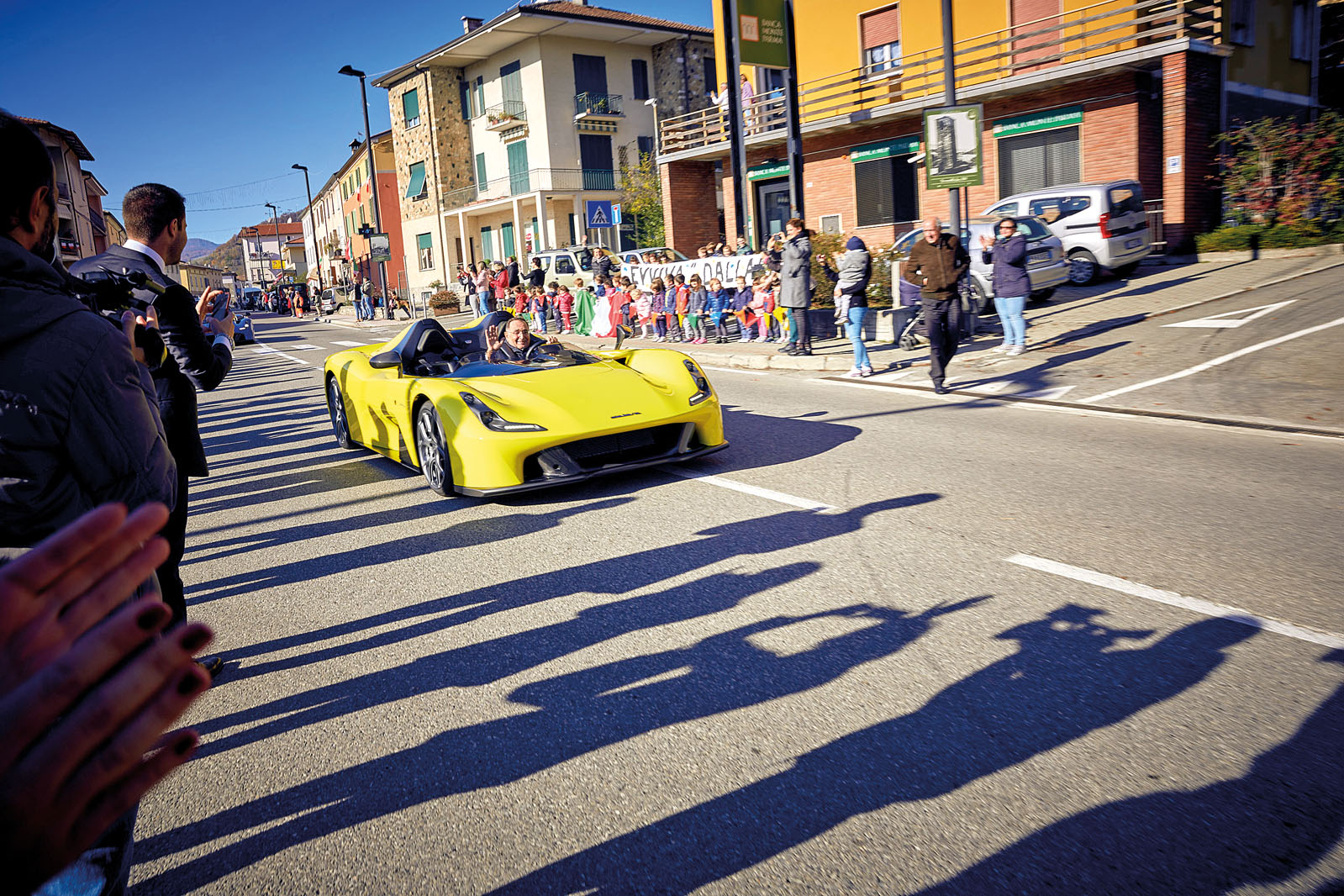 The firm is already thinking of other possibilities in terms of future projects. “We are in a world that is changing so fast,” Dallara says. “We are tempted by the experience of this car to play the game of the mobility of the future. That is probably the biggest advantage it will bring us.”

Even in his ninth decade, Dallara is evidently excited by the prospect of future technology. “I will not be the player,” he says, “but I believe the company will be, because it is in such a strong position. The majority of people in the company are young and very smart. There is ambition.” Although he is not planning to stop working, Dallara has recently bought his own Miura for the first time. “I could never afford one when I worked for Lamborghini,” he says. It’s being rebuilt by Lamborghini’s own Polo Storico factory restoration unit and he hopes to have it soon. With the Stradale, it will offer two fascinating book ends on one of the longest and most distinguished careers in automotive engineering.

This feature is a really good one. It is a great choice of subject. Dallara has a genuinely interesting story, and one which is not so well known here in the UK.

This feature is a really good one. It is a great choice of subject. Dallara has a genuinely interesting story, and one which is not so well known here in the UK.

It is not by coincidence. Especially in this magazine, where chauvinism is frankly embarrassing.

Interesting article about someone who has genuine achievement and vision. More of this please and less of the hero-worship of second rate industry participants like McGovern and Callum.

Interesting article about someone who has genuine achievement and vision. More of this please and less of the hero-worship of second rate industry participants like McGovern and Callum.

McGovern and Callum have worked in and led teams, and they’ve both produced outstanding work at various times. Not everyone can be a one man band, and I’m sure Mr Dallara has many talented people working for him too. Many people, including myself, appreciate good design and strangely enough not everyone can do it.

Maybe one of these gentlemen can post on your employer’s forum that you’re an over celebrated employee?