BACK TO ALL NEWS
Currently reading: Toyota confirms Aygo X name for new 2022 city car
UP NEXT
MST Mk1: Is this the ultimate rally recreation?

Toyota Aygo to return without PSA Group siblings; will be designed, engineered and built in Europe
Open gallery
Close

Toyota's next-generation A-segment car will be called the Aygo X, with the firm claiming it will take the form of a "compact urban crossover" that will be "unique" in its market.

Replacing the outgoing Aygo city car, the new model will be revealed in November. It was previewed earlier this year with the quirky Aygo X Prologue concept, which evolved some of the Aygo's defining characteristics while also jacking up the ride height significantly for an SUV-inspired stance.

Most notably, the Aygo is one of just a few mainstream cars due in the coming months that won't adopt some form of electrification. Toyota has confirmed it will use a variation of the Yaris's GA-B platform, but unlike that car will not be available in hybrid guise, to keep manufacturing – and thus retail – costs down. 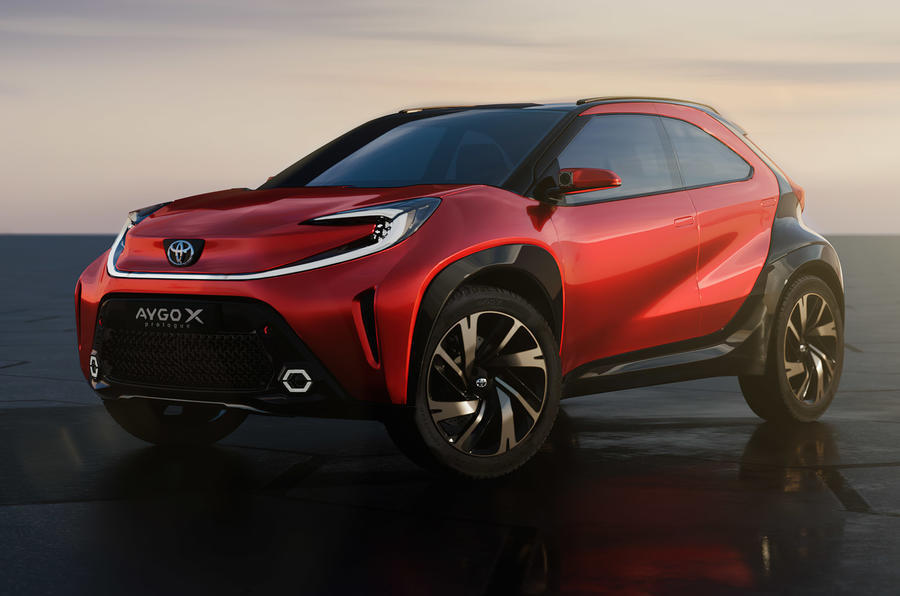 Toyota says that the X should be pronounced 'cross', bringing the car in line with other SUV-style models such as the new Yaris Cross.

Previously seen spy images give a clear idea of what to expect from Toyota's reborn city car and suggest that the Aygo is in an advanced stage of testing. Familiar Aygo design cues include slim overhangs, vertical rear lights, wheels pushed to the edges of the bodywork and a short, upright body. We can also see cues, such as the shape of the rear end from the side, taken from the latest Yaris.

The roof panel has been left unwrapped, showing the optional canvas roof will return for the third-generation car.

The late Toyota Europe boss Johan van Zyl confirmed last year that the Aygo X will be designed and engineered in Brussels, Belgium. It will be assembled at the same plant as the current car, in Kolín, the Czech Republic, with Toyota taking control of the facility from the PSA Group.

The current Aygo is built there alongside the platform-sharing Peugeot 108 and Citroën C1. However, there are no successors planned for either French model, so the Japanese maker will go it alone in the hope of capitalising on other manufacturers - such as Ford, Vauxhall and (in the UK at least) Renault – giving up on the A-segment.

Speaking to Autocar in 2019, vice-president of Toyota Motor Europe Matt Harrison claimed the current Aygo is a "profitable business equation for us", unlike many of its rivals.

"We have an awful lot of equity in Aygo," Harrison said. "We're selling 100,000 a year. It's got a personality all of its own so it gives to the brand rather than takes away. It's the most relevant car for a young audience so it's the access point of the brand."

Toyota is unlikely to offer a battery-electric version of the Aygo for some time. "The small car segment is all about affordability," said Harrison in 2019. "We don't see that as being optimal for full electric."

This everything, every car must look like an SUV, fashion is ridiculous. Why the hell does a city car need to be jacked-up?

Increased ride height is needed in the days where councils fail to maintain the roads and clear drains. In another ten years time, it'll be far worse than it is now.

I wonder wy they just dont call it the Aygo Cross, if that's how youre supposed to pronounce it ...