BACK TO ALL NEWS
Currently reading: Toyota bZ4X concept is brand's first bespoke electric car
UP NEXT
Ami, myself and I: Life with Citroen's 28mph urban EV

The forward-looking bZ4X concept provides a long-awaited preview of Toyota’s first production battery-electric car, which will go on sale in the middle of next year.

Spearheading this roll-out, the bZ4X will be the first model to use the new e-TNGA electric vehicle architecture developed in collaboration with Subaru, whose own first e-TNGA-based EV will be a Forester-sized SUV.

The defining characteristics of the platform include short overhangs and a long wheelbase, which is said to provide a “spacious and open cabin”. In fact, Toyota says rear leg room is comparable to the near-900mm offered by Lexus’s flagship LS luxury saloon. Here, the platform underpins a four-wheel-drive crossover (hence the ‘4X’ suffix), which is claimed to major on comfort, connectivity and openness.

Heavily angled styling cues, chunky black wheel-arch trim, a familiar silhouette and contrasting roof hint at the influence of the strong- selling RAV4 SUV, which has recently been made available with a plug-in hybrid powertrain. However, various characteristics, including an all-new front-end design, point to a different design language for bZ-badged EVs. 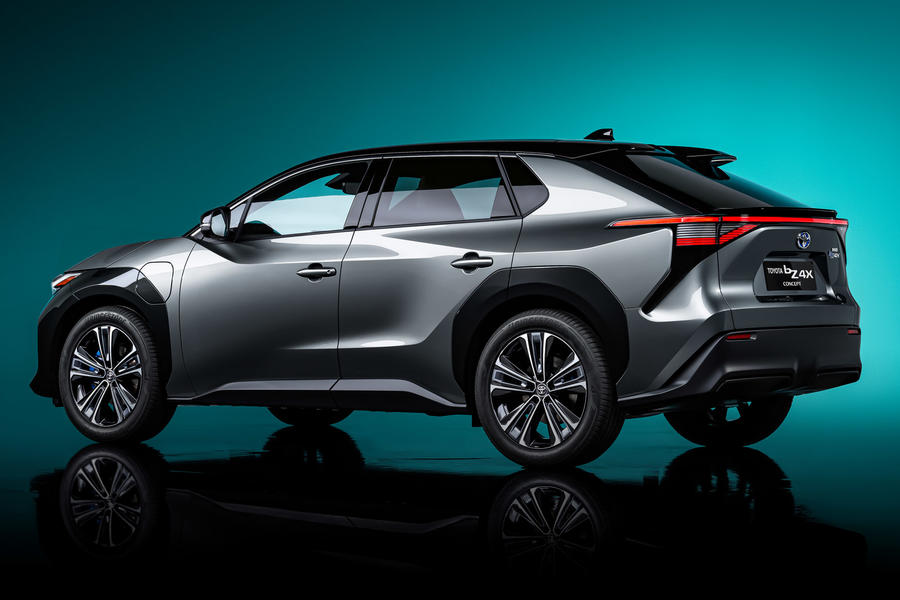 The cabin, shown in what appears to be nearly production-ready guise, has been designed primarily to give the driver “a sense of direct connection to the road and to important information”. The instrument panel is mounted low for improved forward visibility and to minimise distraction. The large central display, wide centre console and textured dashboard can be expected to feature on the production car.

Technical details of the dual-motor electric powertrain remain largely under wraps, but the system is said to draw on Toyota’s 20-plus years of offering electrified powertrains, and to possess “class-leading efficiency and a very competitive driving range”. With power sent to all four wheels, the bZ4X is said to deliver genuine off-road capability, as well as “peace of mind” in all on-road situations.

Like the radical LF-Z concept shown by sibling brand Lexus recently, the bZ4X uses an innovative steer-by-wire system, which removes the mechanical link between the steering wheel and front axle. Toyota claims this enhances control while minimising the directional influence of rough surfaces and braking. 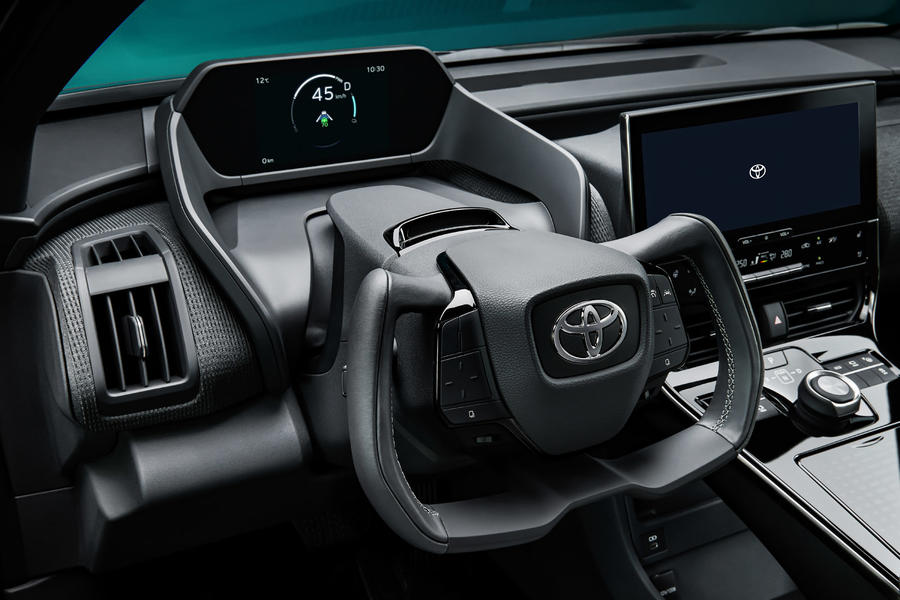 Toyota plans to take the car’s distinctive yoke-style steering device to production as a result, in select global markets, given the driver has less cause to move their hands around the wheel. The bZ4X will, said Toyoshima, make “driving easier and more fun”.

Log in or register to post comments
jason_recliner 20 April 2021
What a brilliant looking thing. Toyota styling is absolutely outstanding at the moment.
Commenter 20 April 2021
Await the mega comparison with mustang mach-e, id4, and ariya with interest. This concept name that quotes Supra's bmw twin surely should not make production, unless it does a vw which kept the up name without reverting back to lupo
The Apprentice 19 April 2021

Actually the steering wheel and dash generally reminds me of one of those arcade games, has it got a slot for a quid underneath?