BACK TO ALL NEWS
Currently reading: Saying goodbye to the Land Rover Defender – an Autocar special
UP NEXT
Nearly new buying guide: Hyundai i30 N

Saying goodbye to the Land Rover Defender – an Autocar special

Production of the iconic Land Rover Defender has come to an end. We're celebrating the iconic off-roader by looking at its past, present and future
Share
Open gallery
Close
Share story

The last Land Rover Defender has rolled off the firm’s production line in Solihull today, 68 years after the iconic off-roader first went on sale.

Over its incredible lifespan, the Defender has been sold across the world, earning a reputation for reliability and ruggedness, as well as a go-anywhere spirit.

Few other cars have managed to attract drivers from such a wide variety of backgrounds. Owners have ranged from members of the Royal Family to farmers and the military. It’s a testament to the Defender’s broad appeal and diverse range of talents.

In the 21st century, the car’s old-school character has become a big part of its charm, and there’s little doubt the Defender is comfortably ranked among the most iconic vehicles of all time.

Land Rover plans to build a replacement for the Defender as early as 2018. Details are slim, but the firm has suggested the new car will be significantly more cost effective to produce and far more efficient to run than the original.

To mark the end of the original Defender’s production life, we followed the very last cars as they were built in Solihull. Autocar editor in chief Steve Cropley and head of video Matt Prior were both on location to follow the last cars along the line.

Arriving in Solihull, Cropley said many of Land Rover's faithful fans had gathered to see the last Defenders being built. "There's a strangely festive air," says Cropley, "rather than any sadness. 'Old faithful' has plenty of friends."

Once inside, Prior had this to say: "Such is the way Defenders are built they've been on the line for a couple of days already, line workers left with nothing to build slowly trailing down the line behind them.

"It's worth remembering what has brought us here. Age has finally caught up with the Land Rover. Were it not for a loyal following that has kept the line bubbling along at around 18,000 cars a year it would have happened years ago.

"This morning the final 15 cars, a mix of short and long wheelbase cars, the final one a 90 in Heritage spec - a soft top like the very first Land Rover [pictured below]. And then it'll be done, until its replacement. But more on that another time." 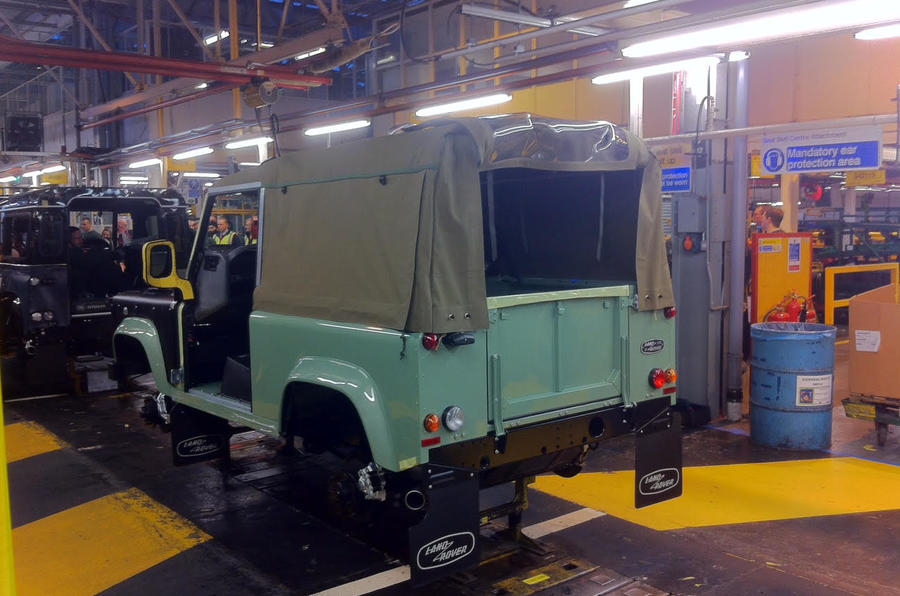 The final 10 cars to come off the line are listed below, demonstrating the continued diversity of the Defender line-up:

The very last model to be built was in fact the 2,016,933rd Defender. Some 9000 parts go into each model, and a 110 Station Wagon takes 15 hours to assemble in a poduction process which involves 550 people.

This is the sight that followed the final Defenders. 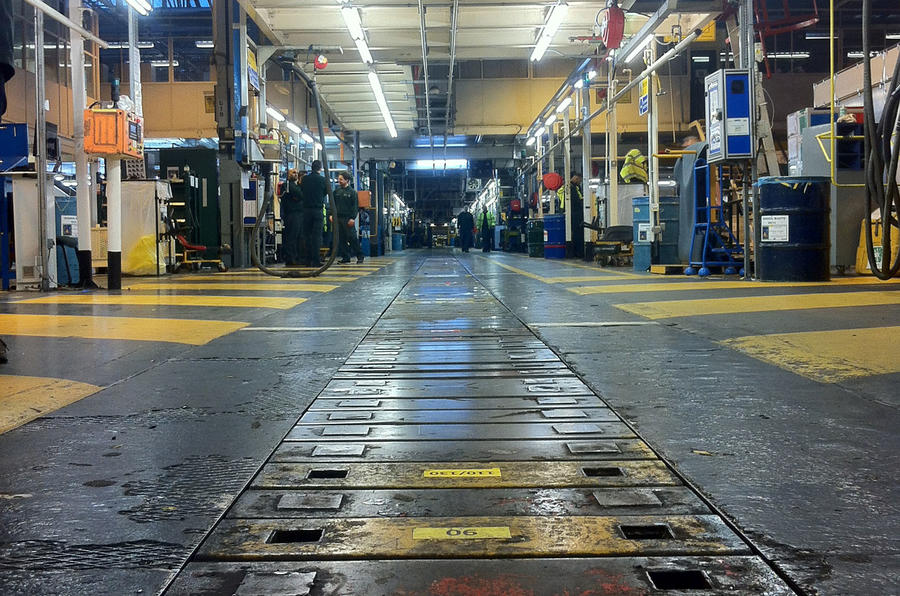 Cropley described the scene: "Seven hundred people from all over the factory converged on the end of the line to witness last car's completion. Upsetting sight for the sentimental, watching technicians putting tools away for the last time."

Cropley also confirmed that Jaguar Land Rover boss Ralf Speth has put down his own money for the last two Defenders - one for himself, and one for his daughter. "There's a weird kind of symmetry here," says Cropley. "As we watch production of the Defender end today, the car world celebrates 130 years since the birth of the car, and Karl Benz patenting a 'vehicle powered by a gas engine'."

Standing next to the production line, Prior said: "They're coming off the end of the line once every five minutes - normally it's four but it's pretty busy on the line, so Land Rover has sensibly calmed things down a little. There are lots of smiles and little ripples of applause and the odd cheer as line workers put down their tools or return packaging to its rack for the last time."

Cropley adds: "There's cheering with every operation, and it has become unbearably moving. There are lots of Defender technicians here shaking hands as if they've just played on the winning team in the World Cup.

"This is surely the end of an era. There's a brief toot from the horn of the final car as it drives away. Can this icon really be ending after 68 years?"

And sure enough, the last car arrived. "A tremendous cheer goes up, a round of applause," said Prior. "At 09.25am on Friday 29 January 2016, the last Land Rover Defender rolls off the production line."

Speaking at an official ceremony to mark the end of production, Speth said: "This is not the end of the Defender. Far from it. We merely pause.

"That [Wilks brothers] drawing in the sand will never be erased by the tide. This is not the last Defender, but it is a moment we must mark in the history of the company. Conceived as a farmer's vehicle it became a symbol of Britain. It is important to always look in this mirror."

Thankfully, the used car market has thousands of used Defender examples. Glass's guide reports that demand for late-plate Defenders has risen sharply since news of the current car's demise began to spread, with low-mileage examples being snapped up by dealers across the country. At auction, too, Defenders regularly fetch high prices due to low supply.

Commercial vehicle manager at Glass's Jayson Whittington said: "People who want to buy a Defender should do so for the same reasons as they have been doing for decades - that it is an incredibly well-proven and capable 4x4 that will keep going in the toughest of conditions."

We’ve searched the Autocar archives and collated the best of our existing Defender features onto this page.

You can get involved too, by letting us know what your memories of the classic 4x4 are in the comments section below.

Read more - a celebration of the Land Rover Defender

Crossing the Atlantic (sort of) - We know the Defender is virtually unstoppable on land, but what about in water? Richard Webber takes a 20-year-old, 216,000-mile example into the Atlantic Ocean. The most extreme Defenders ever made - from the Defender first used by the SAS, to film props and even a version fitted with tractor tyres, the Defender has been modified throughout its life to fit the needs of customers. Here we list the most extreme versions. The man who named the Defender - Bill Morris is Mr. Land Rover Defender, and was also the company's chief engineer when the iconic badge first appeared on a production car in 1990. He tells us his incredible story. The road trip: driving a Land Rover Defender from Calcutta to Calais - in 1951, we took a Land Rover on a 26-day, 6000-mile trip from the heart of India to France. Our Defender memories - perhaps more than most, the Autocar office is full of people who have owned, driven and loved the Land Rover Defender. Our writers recount their Defender experiences. Land Rover Defender versus Suzuki Jimny - Does the big, expensive Defender really outweight the compact and cheap Suzuki Jimny? Watch our video to find out.

Land Rover DC100 prototype driven - The DC100 concept was Land Rover's vision of the car which could replace the Defender, acting as a more premium but equally capable off-road companion. Steve Cropley delivers the first verdict. Read our review of the JE Motorworks Defender automatic

So basically the Defender is the British Hindustan Ambassador. As old tech, simple and not modernized since a few decades. I guess there was tears at the end of the production of Ambassador in India also. Despite the romanticizing of this car I see cars like the VW Beetle as much more iconic and relevant. Almost 60 million made, and most of them in an era of much lower production volumes than today's. Defender should have been at least a bit modernized and better put together. Nostalgia takes an old tractor just so far.
5wheels 31 January 2016

So basically the Defender is the British Hindustan Ambassador. As old tech, simple and not modernized since a few decades. I guess there was tears at the end of the production of Ambassador in India also. Despite the romanticizing of this car I see cars like the VW Beetle as much more iconic and relevant. Almost 60 million made, and most of them in an era of much lower production volumes than today's. Defender should have been at least a bit modernized and better put together. Nostalgia takes an old tractor just so far.

AND my friend you have just about hit the nail on the head - this manner of doing business and production was the ultimate reason why we no longer have a motor industry we can really call our own. Totally defunct management enjoying their cigars, pheasant shoots and country mansions whilst Joe bloggs slaved in the factory ill equipped and all done with the belief that "It is BRITISH and therefore everyone will buy it".. sickening from our grandfathers and our fathers all responsible for screwing up our financial wealth and leadership in the world. How many firsts did British engineers manage and then lose it to other more intelligent manufacturers - like Radar - TV and many many other greats

My first ever solo drive

I was just 9 years old in the field of my best friend - the local farmer. It was a cool day. He had hooked behind it a chain linkage weighing about 1 ton for pulling out the old grass from the meadows.
"There's the keys lad. Off you go !!" OMG 9 years old couldnt reach the peddles properly and I broke into a 29 year old true sweat trying to release that awful button tipped handbrake! I trundled the whole afternoon up and down. Joy of Joys - I am solo driver !! A memory I hold dear to me - The year?? 1954 and the Landy was brand new :-) After this I was down on the farm every day honing my skills, attaching trailers (those wonderful things called muck spreaders!!!) anything to practice. Those days were invaluable. If I had my way every learner aspiring driver to be should be put in a Landy in a big field and given the keys for a day
Cyborg 30 January 2016