BACK TO ALL NEWS
Currently reading: Ricardo unveils military-spec Ford Ranger pick-up
UP NEXT
BMW M3 and M4 get radical new look, more power and 4WD

Ricardo, which specialises in developing engines and transmissions but has also developed the Land Rover Wolf and Foxhound armoured personnel carriers, has equipped the Ranger with a range of features aimed at improving safety, fuel economy and durability.

The most obvious visual difference over the standard model is the addition of an optional external roll cage, which, as with the firm’s military Land Rover, incorporates a circular cut-out at the rear for the mounting of firearms.

Underneath, the Ranger gains an armoured ballistic underfloor, rock sliders and improved waterproofing, while armoured glass and strengthened front and rear bumpers further improve safety in the event of an impact or explosion.

Modifications inside include the addition of four-point harnesses for all the seats, while upgrades have been made to the truck’s 24V electrical system to better cope with the demands of military use.

Ricardo’s special vehicles director, Paul Tarry, said: “The adaptation of existing and well-proven automotive platforms for defence roles provides an opportunity to deliver a robust, fit-for-purpose and highly cost-effective package that is easy to maintain, benefiting as it does from an established international supply chain of parts and service.

“However, it is also crucial in such adaptations to engineer a solution that meets the exacting requirements of the intended applications; even the most robust of commercially available vehicles is unlikely to meet this threshold without careful, role-specific adaptation of the type that Ricardo is ideally placed to provide.”

Although the firm claims its new Ranger-based model demonstrates that it is well suited for military applications, it has not yet been confirmed that it will enter service. 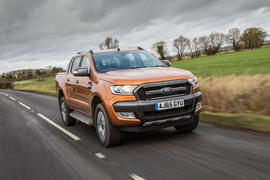 I'd recommend Autocar closes down all forums as the magazine clearly refuses to deal with the deluge of spam. It's no longer worth wading through the spam infestation to post genuine comments about articles. Sad.

I'd recommend Autocar closes down all forums as the magazine clearly refuses to deal with the deluge of spam. It's no longer worth wading through the spam infestation to post genuine comments about articles. Sad.

I couldn't agree more. Autocar really doesn't give a sh*t about the spam or care about their followers who are fed up with all of these crap spam comments.

Until this bunch sort this crap out, the only thing we should post is our own spam.

I made £10bn in the last 3 minutes selling bitcoin to Inuits.  Easy.

Why work for Google when you too can become  a Deliveroo driver. I worked all day ( excluding 1hr lunch in Wetherspoons and a visit to Costa) and have just bought California and put down a deposit on Vatican City.

This the market LandRover missed by a mile with the new "Defender"..

Good to see genuine career opportunities available. I don't even mind taking a pay cut if that's all Autocar can afford !