The decision not to take the car to production is said to have been a strategic one; the Clio RS is built at the Alpine Dieppe plant, which specialises in low volume, hand-built production cars, including the Clio Cup and Formula Renault race cars, plus the Renault Clio V6 and Renault Spider in the past. With the plant now gearing up for production of the new Alpine sports car, company bosses are said to have been concerned about diverting attention away from that project.

"The option of delaying RS16 until after the start-up of Alpine was considered but this would have meant launching the car in the first half of 2018, which is too long for customers to wait," said a spokesman. The Alpine project is said to have taken priority because of Renault's plans to use the sports car to kick-start a family of potentially lucrative Alpine models.

The RS16, was launched officially as a concept, and combined the 2.0-litre turbo engine and manual gearbox of the Mégane RS 275 Trophy-R - the firm’s quickest car to date and a recent Nürburgring front-drive record holder - with the lighter and smaller Clio RS body, adding a selection of exotic RS running gear, including some from its range of competition cars. At launch, Renault officials talked up their hopes that the car would be as prominent in RS history as the mid-engined Renault R5 Turbo and the more recent Clio V6 - now that will not happen.

Read: Will Renault put the RS16 into production?

Renault Sport Cars managing director Patrice Ratti said the “somewhat crazy” idea to build the RS16 - which was developed under the codename KZ 01 - was first discussed in October 2016, but the go-ahead wasn’t given until December, leaving five months to build two prototypes. 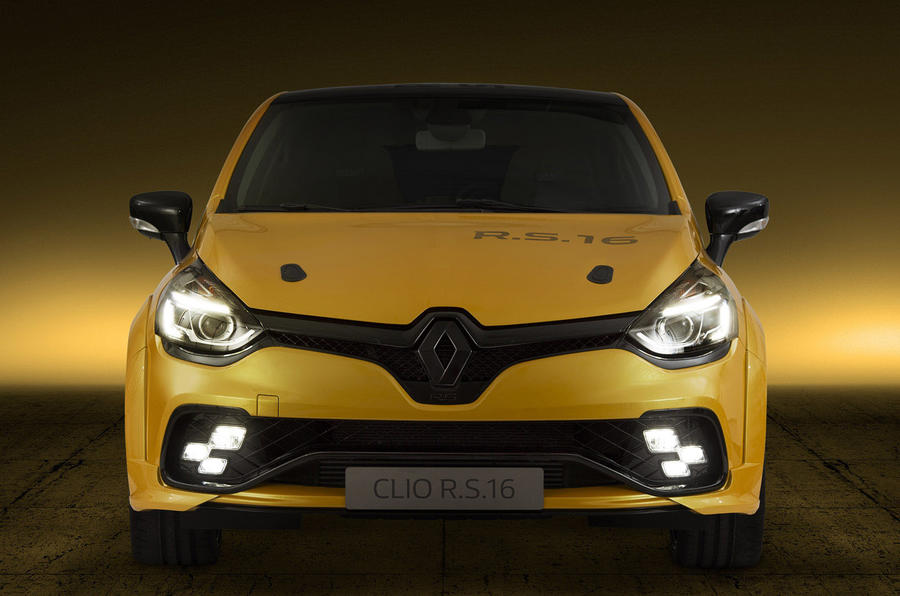 Had it made production, there would have been little doubt that the RS16 would threaten the Nürburgring front-drive record (currently held by a Volkswagen Golf GTI Clubsport S). The Mégane Trophy-R produced 209bhp per tonne, whereas the Clio prototype, believed to be about 100kg lighter, had nearer 225bhp per tonne, plus extra agility and a smaller frontal area.

The decision not to make a production version of RS16 is also a blow for Renault Sport because it was seen internally as a car that could protect its reputation for making desirable high-performance Clios. The current Clio RS 200 has found less favour with UK buyers than previous models, mainly because the traditional normally aspirated 2.0-litre engine and six-speed manual gearbox have been replaced by a softer 1.6-litre turbo engine and a six-speed dual-clutch automatic gearbox.

Even a subsequent, harder-edged 220 Trophy version hasn’t entirely fixed the problem, but Renault insists engine and paddle-shift ’box is popular in new markets and overall sales have not fallen.

Renault Sport boss Patrice Ratti had hoped to build two to three production RS16s a day in Dieppe, at a price around €45,000 (£34,000) in France, which would have probably translated to a price of around £40,000 here. 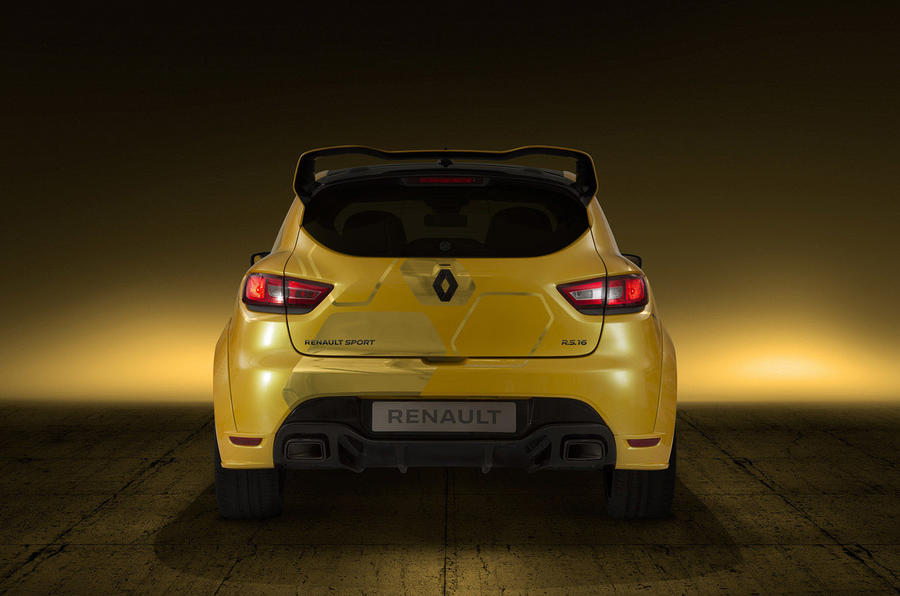 First whispers of the RS16 project emerged at Renault’s launch of its Formula 1 team at the vast Technocentre, west of Paris, in February. With the project only weeks old, Patrice Ratti revealed its bare bones in a confidential conversation and invited Autocar to a technical preview at Renault Sport’s headquarters at Les Ulis, a design centre-cum-race shop carefully set up, in one of its major strengths, to be independent of the mother company.

Four weeks later, the company revealed two partbuilt prototypes, a black driving ‘mule’ that was used to tune the car’s all-important dynamics and a much more eye-catching show concept, gold in colour, which Kevin Magnussen demonstrated to crowds in Monaco. That car also appeared at the Goodwood Festival of Speed.

At Les Ulis, the complexity of the car’s build was fully revealed. The RS Trophy-R powertrain fits snugly, along with its six-speed manual gearbox, but mounting them required much redesigning and the adaptation of parts from the Mégane, Espace and even the Kangoo. In particular, the car was fitted with an elegant new machined engine top mount.

The rear axle came from Renault Sport’s R3T factory rally car, a strengthened twist-beam component said to be around 50% stiffer than standard. The car ran standard Clio RS rear discs, also by Brembo, and the wheels were 19in Speedline Turini alloys, which are well known by Renault Sport owners. However, accommodating the wheels, fitted with 235/35 Michelin Pilot Sport tyres, and a 60mm increase in the front and rear track widths required fairly radical body modifications to maintain clearances.

The standard wings were cut back then covered with handsome composite arch extensions, linked by side skirts. These, along with the roof spoiler culled from the Clio Cup factory racer and claimed to deliver 40kg of downforce at 125mph, are the most obvious visual changes. The car also got a blacked-out grille with its front splitter modified to improve airflow to the intercooler, plus a novel set of ‘chequered flag’ running lights. At the rear the diffuser was standard, although the outlets for the Akrapovic exhaust system are new.

Apart from a new gearstick sprouting prominently from the centre console, the RS16 was little different from a standard Clio RS inside, although its rear seats have been removed to save weight and as another way of announcing its special focus.

Riding shotgun in the RS16 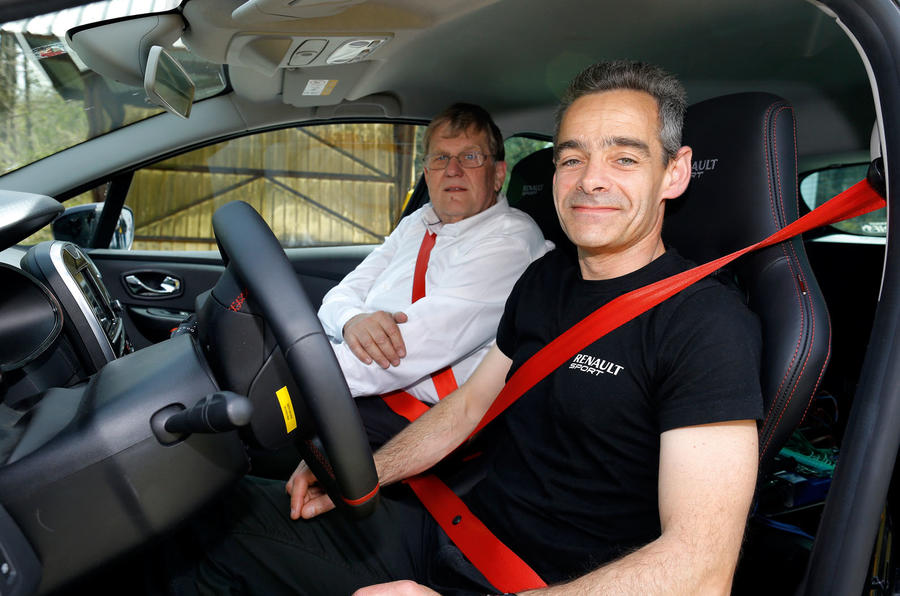 Not long before the RS16’s Monaco debut, I went to Renault’s Aubevoye test centre, 50 miles north-west of Paris, to ride in the black prototype on a smoothly flowing two-mile handling track. I was lucky to go with David Praschl, the car’s chief development driver, who knew the car inside out and had played a leading hand in tuning its chassis. Already settled in the left-hand seat when I arrived, he smiled and held the door open. The engine idled benignly.

It wasn’t benign. Praschl had done lots of laps already — you could smell the brakes — and we erupted away from a standstill. My recollection is of unstinting acceleration, well into three figures. In the first braking area, there was no evidence of the noseheaviness I’d half expected; in fact, the car felt downright light and superbly good at changing direction. Praschl hardly seeming to steer as he stroked the car along with slick gearchanges — via a proper gearlever — at 6500rpm. 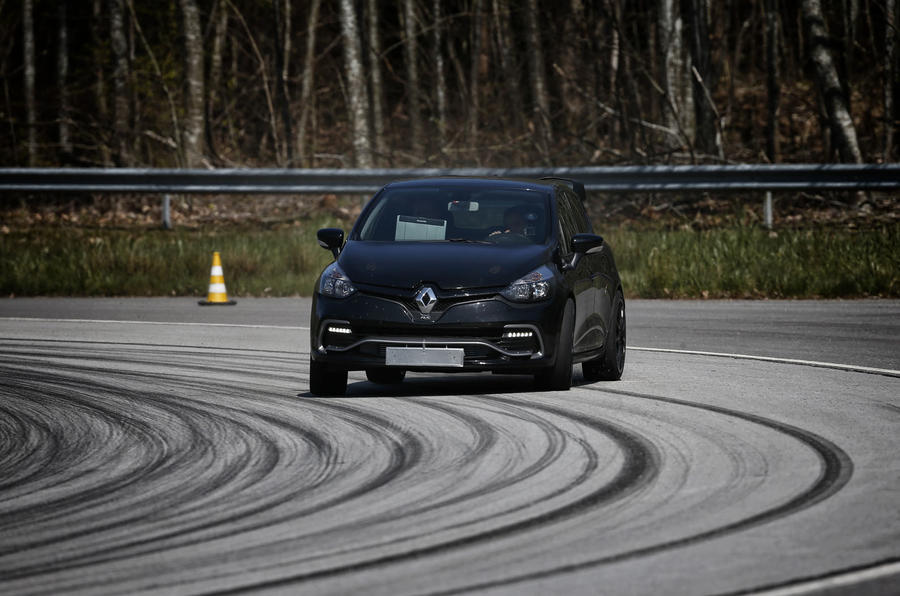 This was a warm day, so we were leaving rubber everywhere. Most of the circuit’s corners were good for 60 to 90mph, but the RS was especially handy in slower ones, showing off its terrific power-to-weight ratio on the exit. I looked deliberately for torque steer as Praschl accelerated hard but couldn’t see his wrists reacting against any. Instead, I enjoyed the way his skill combined with the car’s through sweepers; he set the car up in understeer, then oversteer and then neutrally in the same long corner on successive laps. Too soon, it was over.

Back at Les Ulis, weeks earlier, a team member had said: “We excel at chassis development here. You will see.” It hadn’t struck me as excessively modest at the time, but it would seem he was right.

It is the right decision, I believe: bringing back racing and rallying heritage with Alpine will resonate with many people.
Besides, these 'hot hatches' are no more practical than 'proper' sports cars, so why bother? So far, only VW have managed a reasonable compromise of performance and usefulness with their Golf, but at what cost to the buyers?
kendrick89 16 November 2016

I think if they had priced this against the Focus RS and made it a little more hardcore than the RS it would have got a fair few buyers.
moshe calderon 30 May 2016

Renault will better spend money on improving service mentality, than developing sport cars.
In some places, like Israel, the name Renault means "stay away".
Spare parts are very expensive and in many cases you need a lawyer to get your warranty's rights.
View all comments (6)