BACK TO ALL NEWS
Currently reading: Next-generation Peugeot i-Cockpit to launch in new 3008
UP NEXT
New 2022 Land Rover Defender 130: design revealed in patent

Peugeot has previewed its next-generation i-Cockpit ahead of the technology’s production debut in the upcoming 3008 this summer.

The second-generation system has been completely reworked to incorporate a 12.3in TFT display, 8in touchscreen and eight main buttons located on the car’s centre console. It is said to use the fastest software processor currently available for this type of infotainment, and arrives as Peugeot’s answer to Audi’s Virtual Cockpit.

Ahead of the driver and behind the steering wheel, the TFT display incorporates a similar menu structure to that seen on Audi’s Virtual Cockpit, but the Peugeot gets its own unique graphics (which have been developed in-house) and five customisable displays.

Drivers can use the steering wheel controls to view the system’s standard-fit satellite navigation or driver assist displays, with speed and revs pushed to the screen’s corners, or alternatively, a speedo and rev counter display can be selected for those who prefer a more conventional layout. 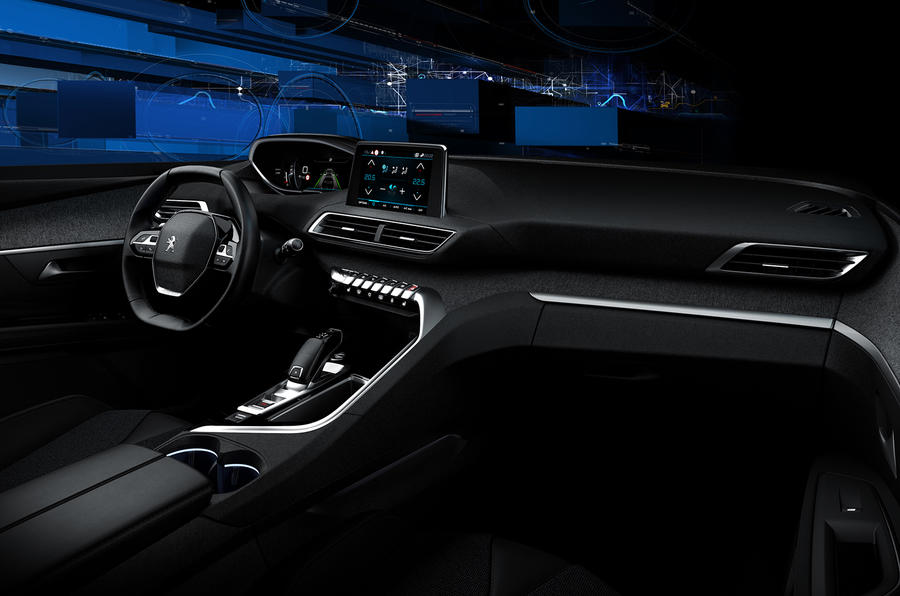 The centre console’s touchscreen can also show a variety of displays, including a 3D version of the Tom Tom-based satellite navigation that features live traffic updates and allows users to touch a building to select it as a destination. Driver preferences are also accessed on this screen, allowing custom settings for lighting, seat massage settings and even cockpit fragrance to be saved in up to three profiles.

To make it easier to access these profiles, Peugeot has added a one-touch button to the dash’s centre console. This button, and the seven others next to it, open controls for key features that drivers will want direct access to, including climate control, heated seats and phone connectivity.

Smartphones can be connected to i-Cockpit via Android Auto, Apply CarPlay and MirrorLink, which places certain journey-appropriate apps onto the touchscreen so they can be used without touching a phone.

Peugeot says it’s worked hard to improve the seating position and dash layout of its cars. The new i-Cockpit retains a small diameter steering wheel, but designers have lowered the top of the wheel by 2mm to help improve visibility of the TFT screen behind – an issue many felt was a major flaw in the previous system’s design.

To boost the immersive experience of driving a Peugeot, the car maker says it’s evolved the engine noise amplifier that it introduced to the 308 last year. The resonator plays a digital sound through the car’s speakers to ‘enhance’ engine noise, and while the experience with the previous-gen amplifier left us unconvinced, Peugeot assures us this updated version will sound more genuine. 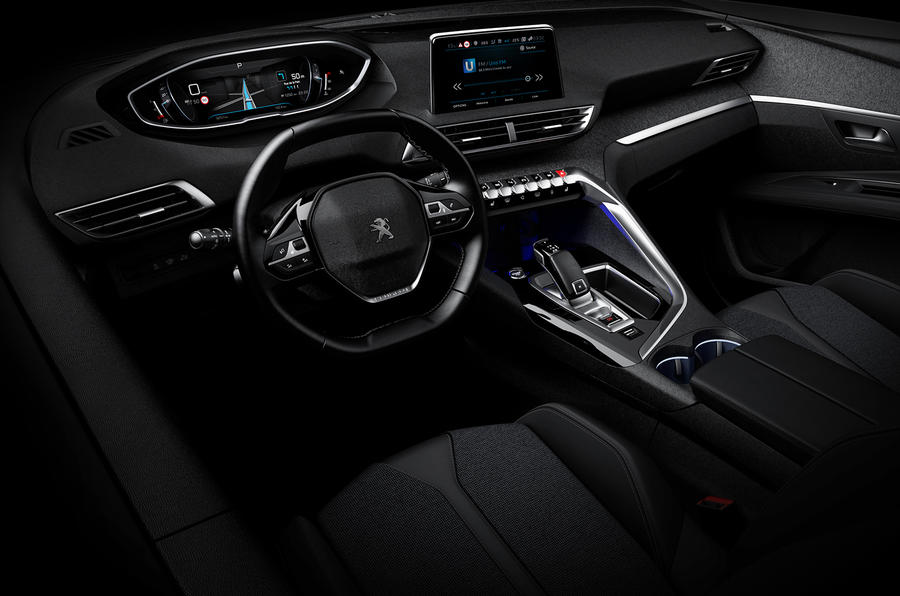 i-Cockpit will be available on almost all of Peugeot’s new models. Though future trim levels are yet to be confirmed, the car maker says it’ll offer the technology on everything but the 108, and it’ll be standard fitment on mid-spec trim levels and above. This suggests models as small as the 208 (which starts at £12,065 in its current generation) will be offered with the technology; in contrast Audi’s Virtual Cockpit is only available on models priced from about £18,900 (the anticipated base price for the recently revealed A3 facelift).

Peugeot says that recent sales figures mean the vast majority of future UK sales, which are currently made up of mid-spec Allure models, will feature i-Cockpit technology. Base model cars will lose the system’s central touchscreen, but retain the TFT display behind the wheel.

The French firm says it has managed to integrate i-Cockpit technology without increasing the prices of its models. While this is surprising given the complexity of this technology, it suggests the cost of producing such systems has really come down in recent years.

The first car to feature Peugeot’s new i-Cockpit technology will be the upcoming 3008, which is due in May. This means the facelifted 2008, which will arrive earlier this spring, will have to make do with the old system.

Why is cabin design so important?

“There are key attributes to our cars that we must maintain, such as how they ride, drive and handle, but some of these features are not so much fun when you are stuck in traffic, or cruising at 50kph. The i-Cockpit is the beginning of the story of an alternative, for making different, perhaps typically more mundane, types of driving more interesting.”

“It is ahead of what our opposition offer. We have been working on these ideas for maybe five years, and now we have realised them. It has not been easy, blending technological advances with more traditional touches, but we feel we have something that is both high-tech and easy to use, and which puts the driver at the heart of the car. A driver spends all their time looking at the inside of a car, not outside, and that is why we have put so much focus on getting this right?”

This is the second-generation i-Cockpit. What did you learn from the first?

“We’ve refined and improved what we had, using feedback from customers and harnessing technology advances, such as processing power. The digital dash will be standard on some models, and changes the entire cabin environment. The infotainment screen is much faster to respond, and the graphics much more advanced. The push buttons are a very physical experience.”

"The pushbuttons are a very

"The pushbuttons are a very physical experience". Wow! This is news! Maybe one day we'll have a few more push buttons and dials to control the basic features you need to be able to adjust without taking your attention off the road.
Deputy 20 April 2016

Hope the software is better than their 108 mirrorlink efforts! Currently it only supports Samsung phones from 2 years ago (only S5 supported however that's not even sold anyomore). Peugeot need to realise that software updates are key here.
superstevie 20 April 2016

Peugeot need to realise that software updates are key here.

While I agree, but surely Toyota also need to take the blame for that system, not just the PSA group

It's good that Peugeot are responding to criticism; the touch screen system in the existing 308 is dreadful. Good to see they're seeing the importance of physical buttons for key functions. However, nowadays it's just as much about the softwares powering these screens - it needs to be good. I'll reserve final judgement until we see it in action.