BACK TO ALL NEWS
Currently reading: 2017 Peugeot 3008 - latest spy pictures show interior
UP NEXT
How the Bugatti Chiron became the first 300mph road car

The next-generation Peugeot 3008 will get a revamped interior, as shown by the latest spy pictures that display the cabin for the first time.

The Peugeot 3008 has been revealed. Take a look.

The car, which is likely to be revealed at the Paris motor show in October before going on sale in the UK next year, gets a digital instrument cluster in front of the new steering wheel, similar to the Peugeot 308.

The manufacturer aims to make the interior more upmarket to set itself apart from key rivals, like the new Renault Scenic, and boss Maxime Picat has said the 3008 will adopt Peugeot's iCockpit.

The new 3008 is the second of three Peugeot-Citroen cars being co-developed with General Motors. GM is also working on a B-segment MPV, which is expected to be badged as a Citroen. In spite of the GM partnership, the new 3008 will be based on the EMP2 PSA platform, which underpins the latest 308 and 308 SW. Picat has stated that the 3008 will differentiate itself from other SUVs developed as part of the partnership through its road holding capabilities.

The all-new 3008 appears to take Peugeot’s MPV crossover in a more rugged direction than the current, MPV-like model. Taking inspiration from the Quartz hybrid SUV that was revealed at the 2014 Paris show, and the new 3008 features a low side window line and a sloping roofline.   As the spy shots show, it will have a higher driving position to bring it in line with rivals such as the Ford Kuga, Mazda CX-3 and Nissan Qashqai.

However, for now, Peugeot is keeping details of the 3008's design under wraps; heavy use of camouflage cladding on the test mule gives us few clues as to what the new car will look like, aside from its overall shape.

Peugeot hopes the new model will steal sales from popular competitors, such as the Nissan Qashqai. The new design suggests Peugeot is aiming the 3008 at the small SUV segment, which is one of the most popular and fastest growing areas of new car sales.

The 2017 model will be fitted with Peugeot’s latest generation of engines, including the 1.2-litre three-cylinder petrol that features in the 308 SW. One engine that will not be carried over is the diesel hybrid, which has recently been dropped from the current 3008 range. Instead, a petrol plug-in hybrid is more likely for the next version of the family crossover. 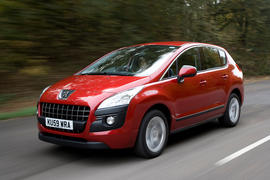 The next Vauxhall Zafira

The effect of GM's bankrupcy meant they had/have no money for the next Meriva and Zafira so the 3008 becomes the next Zafira.
Daniel Joseph 28 August 2015

...every time I see a current generation 3008 in the metal, particularly the rear three-quarter view, it reminds me of the Guinea pig I had as a pet when I was a child. Must mention this to my psychiatrist when I'm next on the couch :)