The electric city car comes with a host of new connectivity features which will be used in models from 2018, like a digital key and real-time traffic forecasts
Open gallery
Close

The electric Seat e-Mii city car has been revealed at the Mobile World Congress in Barcelona, showcasing new connected car technology which the brand will roll out in models from 2018.

Described as a concept, it shares its underpinnings with the Volkswagen e-Up, launched in 2013, and gets an 81bhp electric motor. It has an estimated 100 miles of range on a full charge – but expect closer to 75 in the real world, as with the VW.

Seat says the car will have a top speed of 80mph, 155lb ft of torque and will reach 62mph from a standstill in 11.3sec which is more than a second quicker than the e-Up.

It takes nine hours to give the e-Mii a full charge through a household plug, but a public fast charger takes 30 minutes for an 80% charge.

The manufacturer hasn’t confirmed it will make production, but it has previously stated it will have an electric car in its lineup before 2019. Seat boss Luca de Meo said the e-Mii was an "appetiser" for the car that will be revealed in 2019 but an e-Mii car sharing fleet will be trialled around Barcelona to test out the car and new connectivity developments for it. 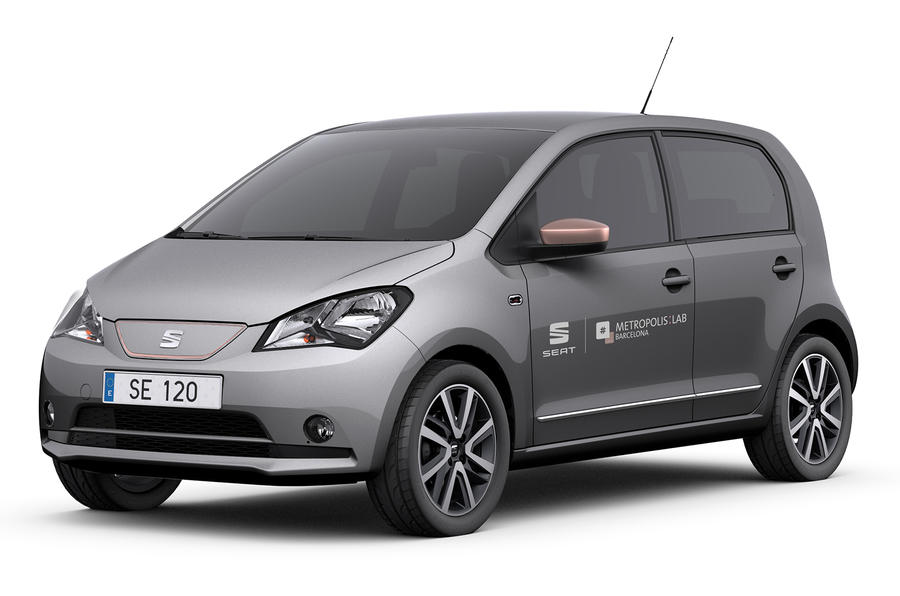 The fleet will consist of 10 cars and be operated with a digital key via a smartphone. Other connectivity highlights for the e-Mii fleet includes a predictive navigation system that can adjust routes depending on heavy traffic caused by major events, a parking space finder, and mobile payment. It will be used initially by workers at Seat's new 'Metropolis:Lab Barcelona' which has been created to develop new car connectivity features.

Although the car may not make production, de Meo says he wants Seat to be a "front runner" for car connectivity in the Volkswagen Group. Seat's boss said the new technology on show will make its way into production cars between 2018 and 2019. It's expected these features will be a cost option, but there's no indication on how much they will be.

While Seat will be at the forefront of the VW Group's connectivity plans, it will borrow its electric and autonomous technology from other manufacturers within the group.

If the e-Mii does make production, it’s likely to command a hefty premium over the standard Mii.

Our Ms May will set out the Governments Store and then we'll see.
AndyT 28 February 2017

They should have saved this

They should have saved this for which ever car would replace the awful looking Mii and hopefully revert back to the name Arosa and ditch this bizarre name too.
Shrub 27 February 2017

why would I want this over the Renault Zoe which has more space, much greater range and a lower price (including battery)?