BACK TO ALL NEWS
Currently reading: New Seat Leon X-Perience to cost from £24,385
UP NEXT
Mystery Ferrari LaFerrari prototype spotted with new bodywork

High-riding Leon X-Perience will go on sale in the UK in September, and acts as a precursor to the Spanish firm's new SUV
Share
Open gallery
Close
Share story

The Seat Leon X-Perience crossover will cost from £24,385 when order books open at the start of September.

The high-riding four-wheel-drive estate is a precursor to the Spanish car maker’s first dedicated SUV, which is set to join its line-up in 2016 following an announcement earlier this year.

The Leon X-Perience builds on the good looks of the Leon ST, alongside which it will be produced at Seat's Martorell factory in Spain. New front and rear bumpers with protective plastic skids plates combine with additional black plastic cladding within the wheelarches and along the sills to provide the new model with a suitably toughened appearance.

The Leon X-Perience comes in two trim levels, SE and SE Technology. Although three engine choices are offered in some markets, the UK can choose from a 2.0 TDI in two states of tune.

Individual options such as a panoramic sunroof, a towbar pre-install, an uprated Seat Sound audio system, and an 18in space saver spare wheel are offered across the range.

The range-topping diesel engine is equipped with Seat's so-called drive profile function. It enables the driver to vary the characteristics of the electro-mechanical steering, throttle mapping and shift points of the dual-clutch gearbox in three modes: eco, comfort and sport. In addition, it also incorporates a sound actuator to enhance the acoustic qualities of the engines. 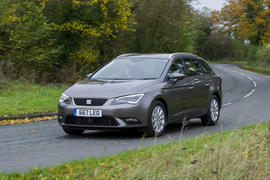 The stylish new Seat Leon ST is a comfortable, practical and spacious alternative to the likes of the Skoda Octavia estate

A handsome alternative to an Octavia Scout

23 June 2014
That looks good Seat and unlike most crossovers it has 4x4. Let's be honest, it isn't a crossover, whatever that means these days, it is a good old 4x4 estate, and an attractive one at that.

23 June 2014
Who'd have thought that this trend for jacked-up, plastic clad versions of regular models all started with the Rover Streetwise. Audi A4 Allroad and A6 Allroad, Octavia Scout, Legacy Outback, Volvo XC70 and V40 cross country, Passat Alltrack and now this Leon X-Perience. Rover got something right in its dying days.

I think Renault did it to the

23 June 2014
I think Renault did it to the Scenic well before the Rover streetwise. I wouldn't think that was the earliest example either.

Who'd have thought that this trend for jacked-up, plastic clad versions of regular models all started with the Rover Streetwise. Audi A4 Allroad and A6 Allroad, Octavia Scout, Legacy Outback, Volvo XC70 and V40 cross country, Passat Alltrack and now this Leon X-Perience. Rover got something right in its dying days.

Surely the earliest model and now looking way before it's time was the Matra Rancho. Humble underpinnings, two wheel drive but off reader like body

Rover were late to the party

23 June 2014
We all know that Seat is planning to launch an SUV but let's not be in such a desperate hurry to call this estate a crossover. Call it Scout, All-track, All-road, but crossover it is not.

Looks great. Better than the

22 August 2014
Looks great. Better than the old Altea Freetrack that's for sure!

25 August 2014
Is the new Leon X-Perience actually a 2008 Subaru Outback with crease lines and a diesel engine?